Out with the Old, In with the New?

I got to work from home again today (woohoo!), so that was nice.  No commute time means more time to get stuff done around the house.  Hubby and I started today with another bowl of peanut butter chocolate chip oatmeal (microwave version this time and smaller portions).  I actually left the PB off of hubby's bowl and was surprised when he complained about not getting a spoonful.  Who knew?  I figured he wouldn't like the fresh-ground almond butter since it had no sugar, but I guess he missed it after all. 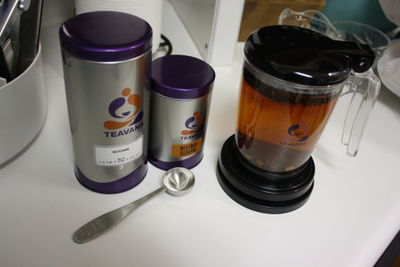 Hubby also picked up some more MateVana for me yesterday so I was able to enjoy a mixture of MateVana + Rooibos Caramel…mmm.

We started unpacking our new plateware and flatware from Crate & Barrel last night.  We got one load in the dishwasher and hubby wanted to load a second round during lunch.  Check out the packaging job C&B did on our plates…I have to say, I'm pretty impressed!  Our spice rack was not so lucky – it arrived in the mail with the glass spice jars broken to bits (I didn't even have to open the box, I heard the tiny pieces rolling around inside), but hubby is going to exchange that later this week. 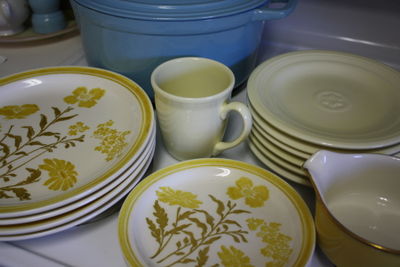 As excited as I am to finally be able to use our new plateware, it's all a little bittersweet to me.  I'm a little sad to pack up our old white-orchid plateware – the set has served us quite well over the years, though we are planning on holding on to them for those big-event entertaining times you need more than a set of 8.  Also, I'm coming to the realization that I'm going to have to giveaway some of my prized thrift-finds to make room for the new stuff.  What do you think about these yellow plates?  Keep or donate?  What do you think of the yellow floral plates? 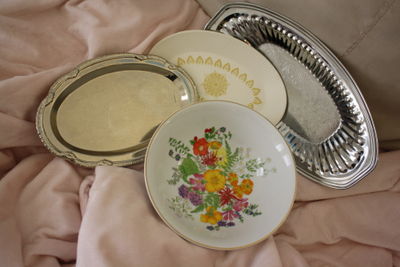 Here's some stuff I decided I can definitely part with.  Two silver-toned platters, one vintage-y white platter with yellow decorations (in bad condition with cracks and stuff), and a pretty flower bowl from the National Cathedral. 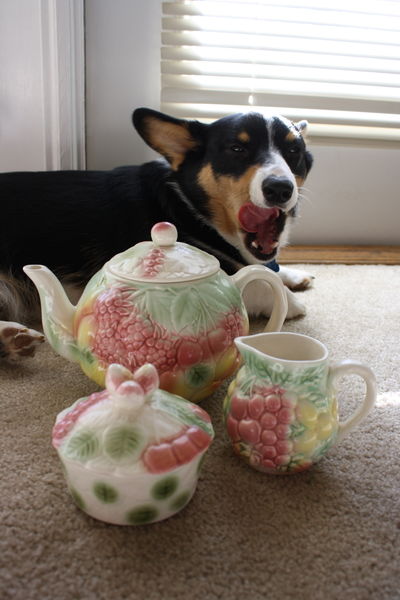 Here's a tea set I got from a garage sale for $5.  I'm contemplating giving this away, but it's so darn nice.  It's actually marked "Made in France" and says "Salins des Bains" on the bottom.  I'd like to say it may be worth something one day, but I watched a show today that makes me think this isn't a good reason to keep it.

I've been watching FitTV a lot lately, and they have some darn good shows! Today, I watched 2 episodes of a show called neat which is sorta like Mission Organization or Clean House.  The lady has some fab tips and I like her de-cluttering style.  On one show today, she made a list of 5 excuses that do not cut-it to "keep it".

excuses that don't cut it when it comes to keeping clutter (from neat):
1. I'm going to fix it some day.
2. I need it "just in case"
3. I'll sell it in a garage sale or online
4. This will be worth something some day
5. Maybe someone else can use it

I'm going to keep these in mind while I work through the rest of my clutter.  There, I said it!  Yes, I have clutter…and lots of it.  I'm feeling a confession post coming out soon, but this is a sneak-peek, if you will, for now. 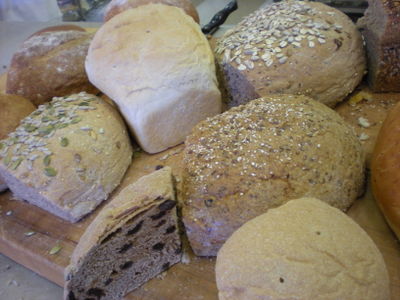 During the normal work-week, by the time the work day is over, I want nothing but to come home as fast as humanly possible so I can relax and put on some PJs.  Since I worked from home today, I took the opportunity to stop by Great Harvest Bread Company to get a nice hearty loaf of bread for tonight's dinner.  Hubby and I decided that we need something on the light side after consuming 4 back-to-back meat-based meals, so veggie soup it is.  For me, nothing goes better with soup than a gigantic hunk of hearty, whole grain bread…yum!  I had two samples from the GHBC sample breads (pictured above) – Flax Oat Bran and Oat Bran. 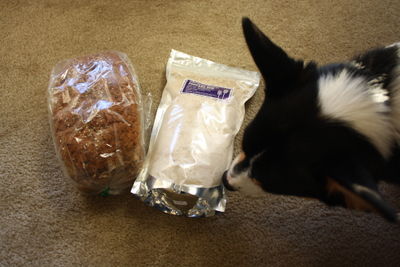 They were both delicious, but I was feeling the Flax Oat Bran for today, so that came home with me, along with some Whole Wheat pancake mix, which I mentally noted to get upon Kath's recommendation awhile back.  I'm hoping to mix this new pancake mix with the Buckwheat stuff, since hubby didn't like it as much as I hoped.  Bailey made sure to inspect everything and gave the ok to keep it. 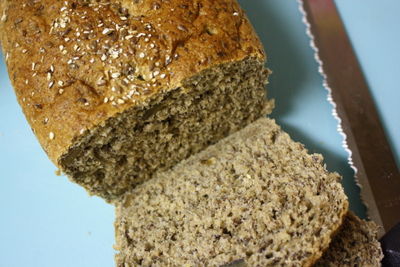 Once Bailey ok'ed it, I couldn't help but dig into the Flax Oat Bran bread for a little snacky-snack.  I sliced a piece, toasted it, buttered it, and enjoyed it with a cup of vanilla soy milk leftover from that rice pudding a couple days ago.  Just look at all that whole grain goodness in there!  That should hold me over till the soup is ready!

5 thoughts on “Out with the Old, In with the New?”