Whenever I think of donuts, or see donuts, or hear the word "donut," I can’t help but see an image of Homer Simpson in my head.  Not just any Homer, but the one you probably know, with his eyes half-way open, saying, "Mmm…donut…"  And, every once in awhile, I am compelled to sound out the voice in my head by, yes, actually saying out loud, "Mmm…donut."  See, I have these strange triggers.  Things I see or hear that make me think of something else, and very often, there’s a verbal action associated to this trigger, much like an inside joke that way back when someone thought was funny, so when you said it out loud, at least one person in the room laughed.  But now, I’m usually the only one giggling about it.  When I was in college, I worked at an Italian restaurant that played a how-to speak Italian tape in the restooms.  They explained common phrases and had some interesting dialogues, but the one I remember the most was an Italian conversation.  I don’t remember the conversation, but I do remember a woman saying, "Hmm…Interesante!" (in-tare-eh-sahn-tay)  To this day, I can’t just say, "Hey, that’s interesting."  No…first thing that pops into my head is, "Hmm…interesante."  You’ll be happy to know I’ve gotten a little better about keeping that one to myself, though…otherwise, it’s just too random.

Anywhosier, back to the donuts…awhile back, I had a pretty bad case of food poisoning, and for a few days there, I didn’t want to eat anything…nothing at all.  I had no appetite, in fact.  But, the funny thing with being sick and not being able to or wanting to eat is that when you finally want to eat, there’s usually one strange thing that you really want, and you simply aren’t satisfied until you have it.  Maybe that’s just me, though? 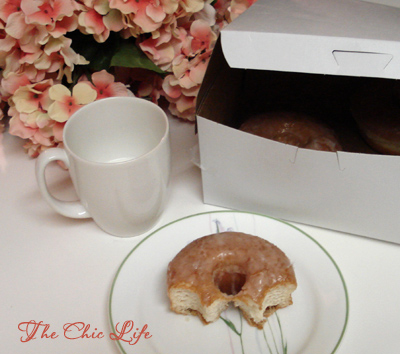 For me, all I wanted was a glazed donut from a local bakery.  It’s all of 65 cents, but for a working woman, the place is ridiculously hard to get to.  Their hours are the same as my work hours, so it was nearly impossible for to stop by.  So, I hinted to my SO, "All I’ve wanted to eat since I started feeling better is a donut from the bakery, but it’s so hard for me to get there."  Yea, hints and men are not a good combo.  They just don’t get it (sorry to any guys reading).  So, I tried getting more and more obvious, but after nearly two months, I finally just laid it all out on the line…in a nice way, of course.  And look what I got the other day – a whole box of the donuts I wanted.  Woohoo!  I downed three donuts in one night…oh yea.  They were delicious.  I love getting goodies from local bakeries…I guess I feel like they’re more special when they’re handmade and not mass-produced.  I also love how this bakery puts just a touch of lemon juice in their glaze…it gives the donuts this extra oomph of flavor I find irresistable.  Hmm…maybe I’ll try to leave work early and grab one today?