Do you ever hear something, like the name of an entree, or even just the type of side, and think…hmm…that sounds really good?  I swear, I heard the word "risotto" more times than I can count when I was watching Hell’s Kitchen, and every time I heard it, I swear it sounded more enticing (yea, through all of Chef Ramsey’s cursing and what not).

Last Friday, my SO and I went to Olive Garden for dinner, and since I cannot eat meat during Lent, we couldn’t enjoy our usual: an appetizer (usually the cheese fonduta or bruschetta) and the chicken parmesan sub fettuccine alfredo – split.  We were stuck with the task of picking out something different to eat at Olive Garden for the first time in years.  Something interesting caught my attention from the corner of my eye: Shrimp & Asparagus Risotto.  Wow!  That sounds great, I thought!  I somehow managed to talk my SO into splitting it with me and boy was it good.  I mean, they had completely over-salted it to the point it was burning my tongue, but I could tell that underneath all that salt, there was something really great.  I knew I’d have to figure out how to make it on my own since the chances of us ordering it again were slim to none (not b/c of the over-salting but b/c my SO really likes his chick parm).

Anywho, on Sunday, with my new March budget, I was feeling generous and decided to try the recipe out on my own…sans recipe, that is.  I looked up the Basic Risotto recipe (kinda like this one, but without the mushrooms and peas – I recommend the book version, though) in my Everyday Italian cookbook and figured out the extra ingredients I’d need: shrimp, asparagus, heavy cream, and parsley for good measure. 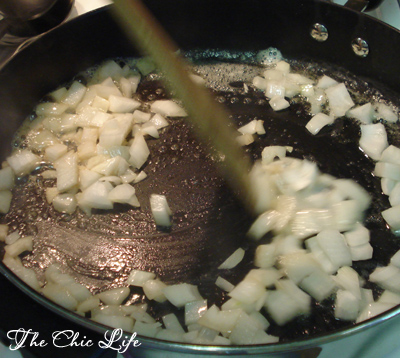 I started per Giada’s recipe and melted the butter over medium heat, then sauteed the onions till tender, about 3 minutes.  Meanwhile, a box of chicken stock was coming to a simmer in a pot behind this pan. 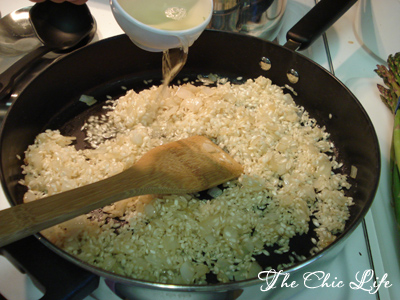 Next, I added the rice, tossed to coat, then added the wine and stirred till absorbed. 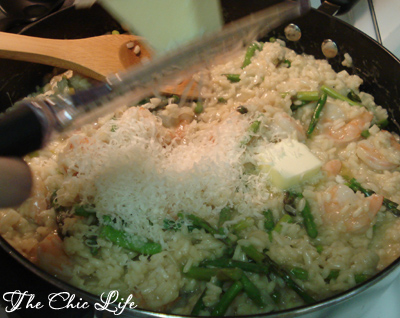 The rest of the recipe is pretty simple in concept, but quite a workout on the arms.  Add 1/2 cup of simmering chicken broth to the rice, stir till absorbed…about 2 minutes.  Continue adding broth and stirring continuously until rice is tender…about 20 minutes.  At about 6 minutes till complete, I added the asparagus.  At about 4 minutes till complete, I added the shrimp.  As I couldn’t quite tell if the shrimp were done, and I tend to freak out over undercooked food, I added about a cup of hot water to my pot of broth and ended up cooking the whole thing for a few minutes more.  When I thought everything was done, I turned the heat off, added an additional tablespoon of butter, about 2 tablespoons of grated parmesan cheese, and about two tablespoons of heavy cream and stirred till combined.  Just added cream until the mixture is the consistency you like…I ended up using about 2 tablespoons. 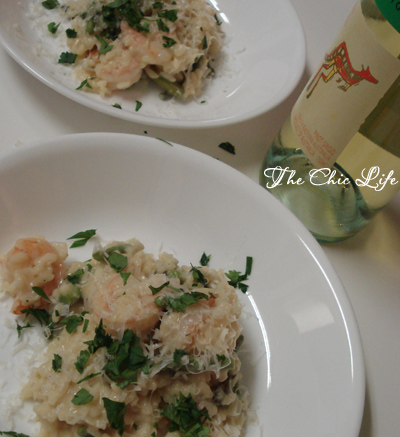 I served my shrimp & asparagus risotto in shallow bowls and topped with more, yummy parmesan cheese grated over the piping hot risotto, then topped the dish with chopped Italian parsley.

I was surprised at how good it turned out, but I guess the recipe is pretty simple.  If you try it, be sure you add salt and pepper along the way, but don’t over-salt it – apparently that’s easy to do with risotto, which I can attest to.  lol.  Anywho, this was a winner in my house…I’ll definitely be making this one again!  Yum!