Today was a looooooong day.  I am having such a hard time getting used to the time change.  It's not the difference in wake-up or bed time…it's having to leave work in the dark, walking three scary blocks through downtown without a lot of people around, and hoping I get there safely that really bothers me.

Anywho, I've been trying to see the upside of the time change by using it in an attempt to both go to bed earlier and wake up earlier.  Today, I work up at 6:30am, got to work by 8:15am, took an hour lunch (which I don't usually do…I usually eat at my desk) and got Chick-Fil-A with a co-worker from my previous project and didn't leave work until 6:30pm.  I got some good OT in, which is good b/c my company's quarterly meeting is this Friday morning, and I'll probably have to make up the time I miss from my project.  See, I'm a consultant and we bill in 15 minute increments when we're assigned to a project.  I'm currently assigned to a project at a major bank, and I always try to get 40 hours a week…even if I have appointments or whatever else.  I'm not sure if we have to get 40 hours on a quarterly meeting week, buuuut…I like to try to always bill a minimum of 40 hours.  A lot of clients don't want you to work more than 40 hours, but that's something I like to talk to them up front. 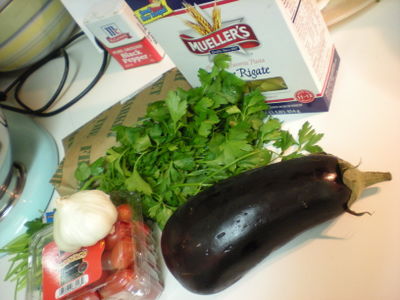 Anywho, I only had a quick couple of minutes to try to look up recipes for the swordfish I bought at the grocery store yesterday, and I found two that looked interesting in the short time I had to research.  One was by Ina Garten and one was by Giada DeLaurentiis.  Of course, on my way home, at 6:45PM, I was reconsidering those recipes and really thinking of just ordering pizza. 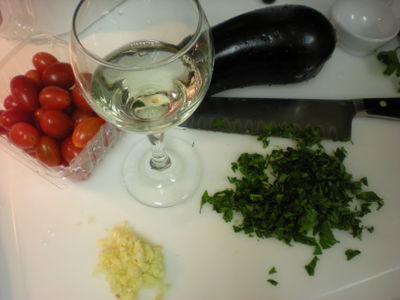 I called my parents to ask them how long the swordfish would be good in the fridge because I am super-sensitive to the idea of eating expired foods.  I mean, milk a couple days after the expiration is one thing, but fish?  I didn't want to risk it.  My dad suggested I cook the swordfish tonight or freeze it (since I bought it yesterday), so I decided to suck it up and cook the fish.  I chose the Giada recipe – Sicilian Penne with Swordfish and Eggplant b/c it had less ingredients and picked up all the groceries on my way home. 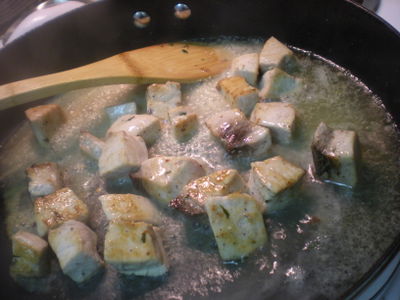 I decided that even though I didn't really feel like cooking, I was consciously going to use making tonight's meal as a way to wind down from the long work day.  I think there really is something to having the right attitude with things, ya know?  So, I poured myself a glass of wine, turned on the radio, and enjoyed my cooking. 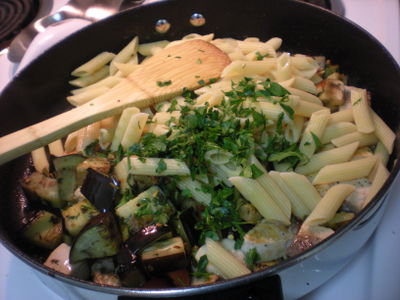 The meal came out just okay, but at no fault of Giada.  See…I'm actually not a fan of seafood.  We hardly ever ate seafood when I was growing up, so I think I'm just not used to it.  My mother is a bit of a seafood-snob.  She grew up on the coast of the Philippines where they had fresh fish all the time.  Apparently, when she saw fish in the Americas (in-land), she called them "nasty fishies."  lol.  You have to see my mom saying that…She's a tiny 4'10" tall Filipina lady and you can't hardly judge her for saying that because she looks so darn cute saying it.  She doesn't ever really say it around us anyways…apparently, that's just something she said to my dad back in the day, but he likes to tell us the story and make her say it for us so we all get a good laugh. 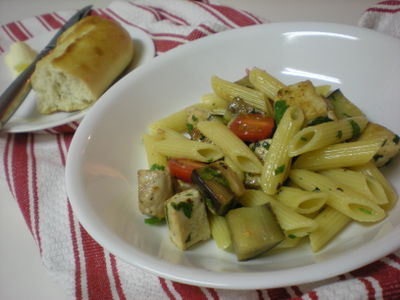 Oh, and did I mention I'm not all that in to eggplant?  Yea, my mom used to make some weird Asian eggplant dish when I was younger, and I always thought it smelled funny.  I think today is one of the first times I've eaten eggplant…that I can remember, at least.  Anywho, I'm still quite happy with tonight's meal.  We tried two new things – swordfish and eggplant.  You know, I sometimes wonder if I'll get stuck in food-ruts, sticking only to things I know I like, etc.  I hope that is not the case, and I hope our occasional experimenting gives our eating nice variety.
Is there anything you're afraid of or not used to eating?
Pin
Tweet
Share
WhatsApp
Email
0 Shares