I had plans to wake up at 6:30am, get ready for work, and have a slow morning actually enjoying breakfast in the house for once. Instead, I was bad again today and snoozed for an hour. I really need to work on that…it’s becoming quite the bad habit! By the time I finally got up, I turned the TV on, around 7:30am, to hear that we had snow. This used to be happy news when I was a kid because classes were cancelled and you had a free, fun day. This is no longer happy news as it means that now, I have to brave horrendous traffic dodging the idiots who think they can drive the same way in snow/ice as they do any other day.

To top things, the newscasters announced that the snow had already turned into black ice and that the roads were extremely dangerous. To put things in perspective, they went on to say that there were 5 wrecks on Monday, 10 wrecks on Tuesday, and so far (at 7:30am) there were 40 wrecks today!! 40!! Hubby told me that I should take a personal day, but I knew we couldn’t. We are working on a project with an extremely aggressive schedule, and there is no time for personal days. 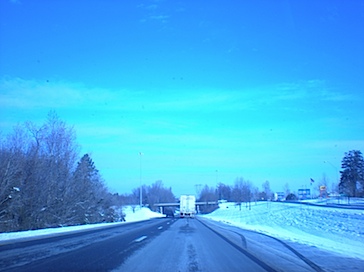 After trying to figure out a way to get out of going into the office, I came to the conclusion that it simply wasn’t do-able and that I should just head in and hope for the best on the roads. I should add that I’m terrified of driving in inclement weather. All you need to do is hit one patch of black ice and who knows what could happen. Oh, and for the people who get snow all the time scoffing at me right now, snow is one thing, but black ice is another, much more dangerous creature. Not to mention that people down here don’t know how to drive in either and are likely to take you out with their terrible snow/ice driving skills. Sorry southern peeps! Nothing personal, we really just don’t see this weather much.

Anywho, I took my camera out on my commute to work and tried to grab a couple photos of the icy roads. Before you say anything, I really didn’t aim with the camera, I kept my eyes on the road, held the camera up in a general forward direction and hoped at least a couple shots would come through. The first few were taken with a tweaked white balance setting that cast a strange blue hue making things look even more icy than they were. 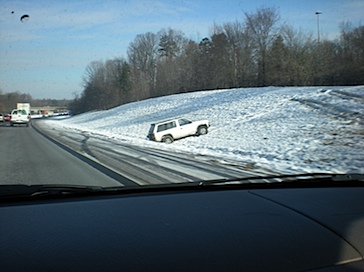 Here’s more what it really looked like. There were plenty of cars on the sides of the roads.

Anywho, thankfully, I made it to work safely and convinced my co-worker that we could finish a document we were working on remotely, so I am already home too. Phew! Better get ready for her to call. Let’s hope for better weather tomorrow!