I’ve really been enjoying my book, The 150 Healthiest Foods on Earth, by Jonny Bowden. In the Intro section, Bowden highlighted a few foods, including salmon, which reminded me that I need to eat more fish. Bowden also mentioned that Omega-3’s (found in salmon and other foods) can actually help improve your mood, and I can always use a pick-me-up, so I decided to make salmon last night. 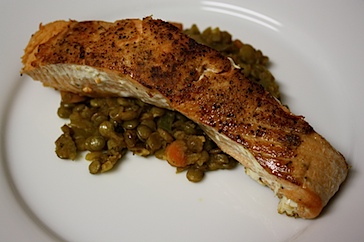 However, when I got to the Fresh Market, they only had farm-raised salmon on hand. I’ve read before that “wild” is far better than “farm-raised”, so I asked if they had any in the back. They said it was frozen, but they could have some ready for me today, so I went with that quick-fix dinner last night and planned to have salmon tonight. They told me to stop by the next day (today now) after work.

So why “wild” over “farm-raised”? There is a lot of information, but I’ll try to summarize. According to Bowden, wild salmon feeds off of krill (and shrimp), which gives them their rich color and results in a “fish filled with wonderful omega-3 fats.” Farm-raised salmon are fed grain and can be given antibiotics to help prevent disease from spreading since they are kept in tighter space. Besides the farm-raised salmon possibly containing antibiotics, they have higher levels of inflammatory omega-6 fats and are typically dyed, using the SalmoFan, to get that salmon color you expect. Here’s another article on the topic (click). 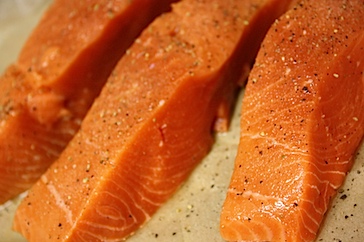 Anywho, so I head to Fresh Market, as promised, to pick up my salmon today after work. The nice man helping me goes to the back to cut my pieces. He says he can’t cut exactly 2 8-ounce fillets (what I asked for), so I say an estimate is ok. He comes out with a piece to weigh and as he’s doing his thing, I ask him if he’s heard about wild salmon being better than farm-raised thing. The salmon hits the scale. I see it’s about 1.5 lbs. It’s probably twice as much as we need for the two of us (I know I asked for 8-ounce, but that’s just for a general guideline), but he’s already gone to so much trouble, I can’t ask him to put it back…how can he, he just cut it off of a gigantic whole piece of fish. The man answers my question as he removes the salmon from the scale, saying, “Well, at $19.99 a pound, not many people can afford the wild.” $19.99. per. pound? If I were on Ally McBeal, you’d see a cartoon of me with my jaw touching the floor…gaping…wide. I was shocked. I didn’t think it would be that much. I guess I never thought to ask the price. I kept thinking…hubby is going to kill me!

But, on the other hand, you can’t really put a price tag on health (at least that’s what I’ll keep telling myself) and to be honest, if we pair wild salmon with other less expensive meals throughout the week, I really think things will average out. 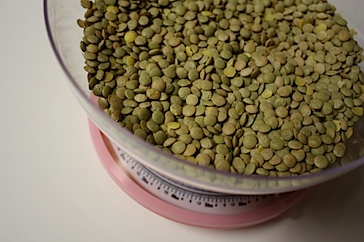 Anywho, meal prep started by weighing out the lentils and getting them set in boiling water. 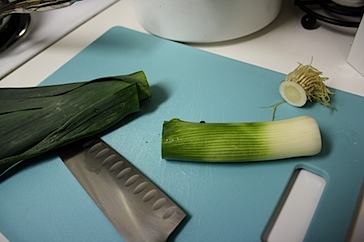 Next, I wanted to get the leek soaking in water to get all the grit & dirt out. I wonder if people cook with leek often. It doesn’t strike me as one of the popular veggies. Perhaps because people don’t know how to cook it or prep it? 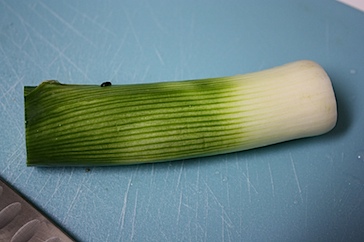 For those less experienced, you want this part – the white and light green. Trim the end of the root off and take off those green leaves near the base. They are apparently not at all tasty to eat (though I wonder if you could use them in a broth recipe? Hmmm). Be sure to get these really clean. Oddly enough, Alton Brown did a Good Eats tonight on leeks and suggested cutting the leek lengthwise (so you have 2 long halves with semi-circles at the ends), swishing the leeks in water (think a pot or large bowl filled high with water so the dirt has room to fall to the bottom), and letting them soak. I did that and it worked just fine. 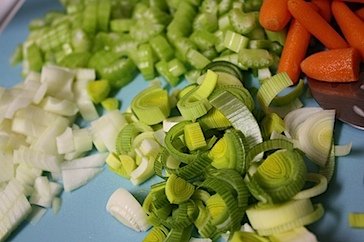 The dish used lots of other fresh veggies. Don’t the leeks look cool all sliced up? 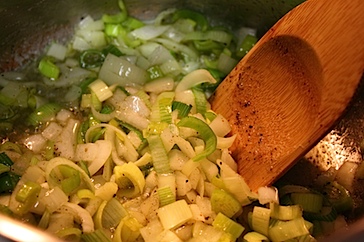 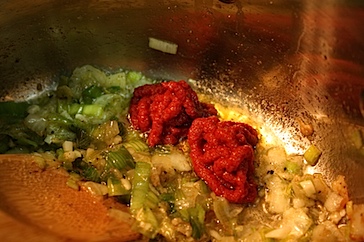 See the two red blobs? I finally got my first tube of tomato paste. I feel so professional! lol 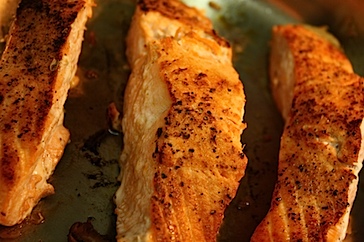 Salmon after a stint in the oven. They smoked up pretty good when I sauteed them on the stove, so that freaked me out for a minute, but once they got in the oven, they were ok. The salmon is a little bland in and of itself (it’s only seasoned with olive oil, salt, and pepper), but if you eat bites of it with the lentils, it all comes together nicely. 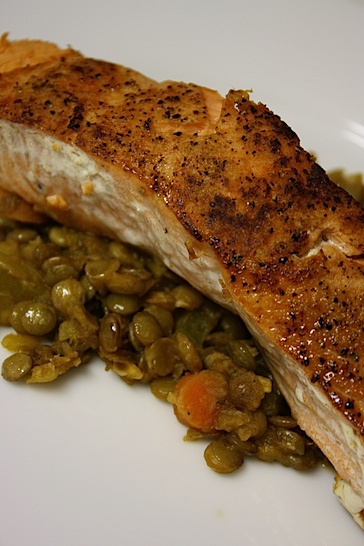 My Notes: The pan may smoke when you sear the salmon – be prepared for that. You may want to drop a tsp or so of olive oil in the saute pan before adding the salmon. I covered my salmon with a lot of oil, and it still seemed to stick. I also changed the proportions of the veggies based on what I had on hand. See her original recipe for original ingredient list. Also, be sure to ask your fish guy to take the skin off…I did it myself tonight and it was a pain. Worth the work, though.

Place the lentils in a heat-proof bowl and cover with boiling water. Set aside for 15 minutes, then drain.

Meanwhile, heat the oil in a saute pan, add the onions, leeks, thyme, salt, and pepper and cook over medium heat for 10 minutes, until the onions are translucent. Add the garlic and cook for 2 more minutes. Add the drained lentils, celery, carrots, chicken stock, and tomato paste. Cover and simmer over low heat for 20-25 minutes, until the lentils are tender. Add the vinegar and season, to taste.

Preheat the oven to 450 degrees F.