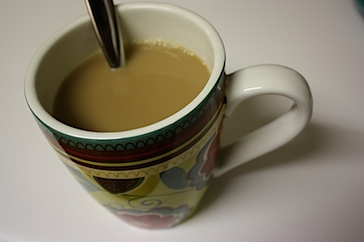 I started today more awake than normal and with my usual FM Breakfast Blend with sugar and 2% milk. 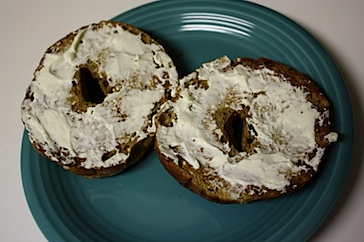 I also had a Perfect 10 Western Bagel from the swap – I think I like this better with cream cheese. I used about 1 tbsp. I don’t like a lot of cream cheese on my bagels (nor mayo on my sammies…something about a big bite of creamy goo turns my stomach, but a little is quite tasty). 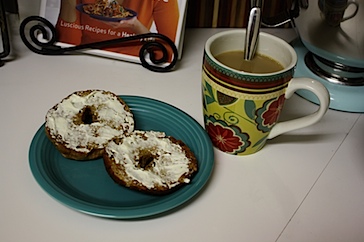 What a great way to start a Friday?! 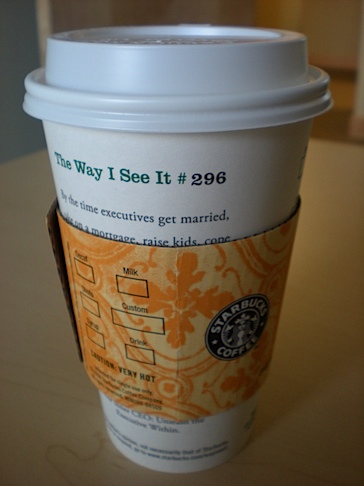 Today was my Starbucks Friday (my little way to spend less on coffee since I’m watching my expenses), so I got a Grande Hazelnut Nonfat Latte. I started drinking the nonfat lattes because I couldn’t taste much difference in the milk and I figured if it tasted about the same, I may as well choose the healthier option. 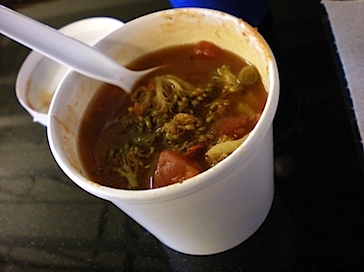 For lunch, I picked up one of those $1.99 soups from a local grocery store. I got Tomato Vegetable and it was great with a hint of heat (as in spiciness). 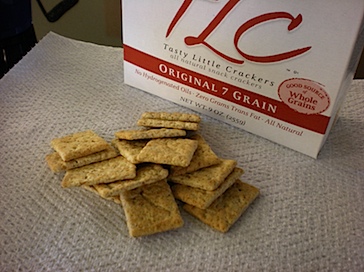 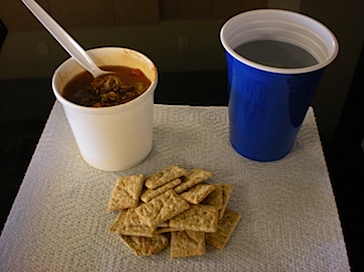 I had a big glass of water with lunch, but it was still pretty light and left me a wee bit hungry. 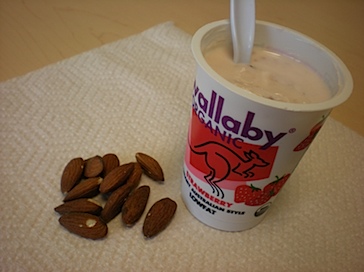 Shortly after lunch, I was noticing that I was still pretty hungry, so I grabbed a yogurt from the fridge along with a small handfull of salted almonds. Wish I had some more wheat germ on hand! 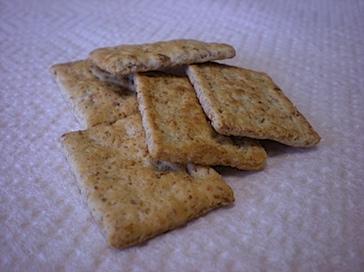 I also had 5 more Kashi crackers to tide me through our big meeting today, which was scheduled to last 2 hours. 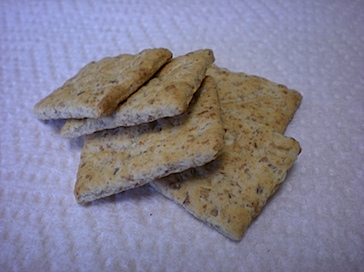 After the meeting, I was still craving food, so I had 5 more Kashi crackers. 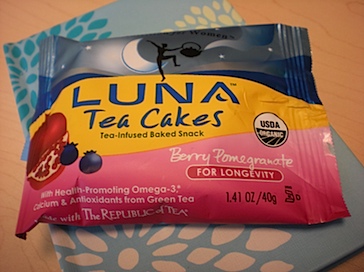 Since I was planning on going to my DanceOut class after work, I decided to add another snack to the mix and had a carbalicious, low-protein (at least compared to the other bars in my stash) Luna Tea Cake in Berry Pomegranate. 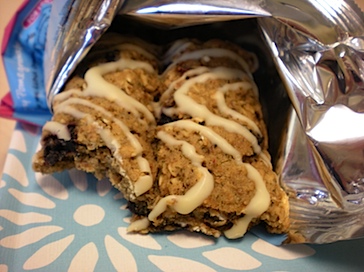 The bar was delicious! It reminded me a lot of a muffin or scone. It kinda tasted like a nutragrain bar, but without the jelly-like filling. The icing on top was a nice touch. I liked the chewy pieces of dried fruit, too, and the size was nice and small. I will definitely be getting more of these.

After our meeting today, the whole office was gathering at a local restaurant for drinks. As much as I wanted to join in on the festivities, I really wanted to make my DanceOut class. I should have left straight from the office to go home, but I wanted to be social, so I headed over to hang out with every one. I had an interesting interaction with the bartender when I sat down at the bar with my co-workers. It went something like this:

Since when did “I’m not drinking” mean “I want wine”? lol. I thought that was pretty funny. Anywho, I stayed for about 30 minutes chit-chating and stayed too long. I missed class by a mere 5 or 10 minutes. I could have frantically changed and sped over, but I would have been late and I hate to be late for things. Not to mention I’d be stuck in the back of the class where I couldn’t see what was going on. 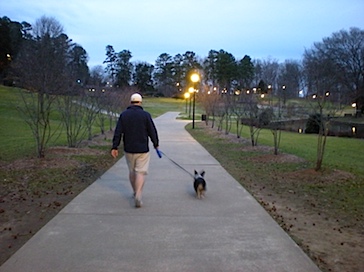 Hubby and I made the best of it and took a long walk with Bailey – about 45 minutes. I have 1 more work-out I need to complete tomorrow to round out my week, so I’ll have to come up with something good to make up for my slack-ass-ness tonight. lol. 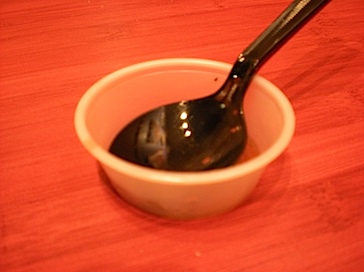 As we walked home during our exercise, hubby talked me into going to Panera for dinner. I think he just wanted us to go there to delay the inevitable, which is me making sweet potato fries. Hubby says he doesn’t like sweet potatoes, but he did admit to liking sweet potato casserole, so there’s still a chance!

I got a sample of the French Onion soup at Panera and decided to get that for dinner. 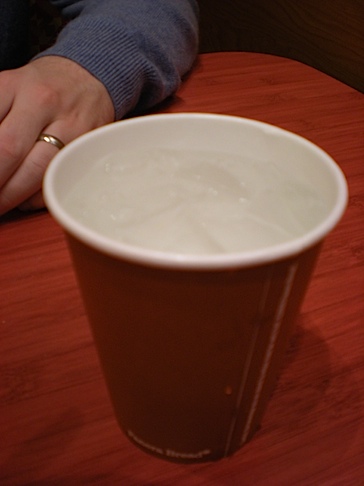 I also had a small glass of ice water with dinner. 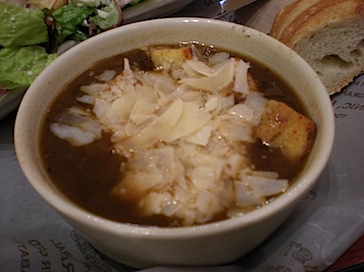 For my meal, I got the You Pick Two (I like variety in my eats) with the French Onion soup, which was quite good but a bit on the salty side. 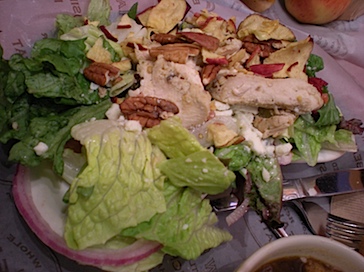 I also got the Fuji Apple Chicken salad. Fuji apples used to be my fave till I fell in love with Gala. 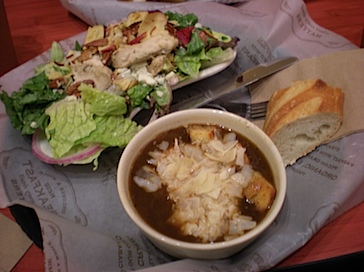 I also got a piece of white baguette, which I shared with hubby. I’ve been trying to get myself to eat the wheat, but the white version here is so much better. The texture just isn’t right to me in the whole wheat version. I think I’d like the whole wheat version if it were just a “roll” and not “baguette.” With baguettes, I expect the hard crust and soft inside, which is hard to do with wheat, ya know?

I ended up eating most of the salad (left some for hubby) and half the soup (hubby didn’t want the soup). Everything was good, but it was just too much food. Good thing hubby was there to help! 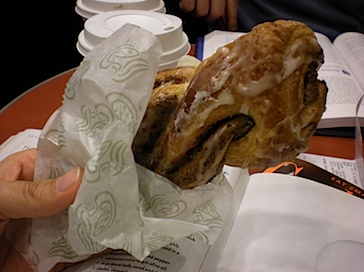 Hubby likes to claim that I am the bad influence with the sweets, but I think it is him. He talked me into getting this pecan twist from Panera to take to Barnes & Noble where we could read magazines. We first stopped by Dick’s Sporting Goods where I almost bought new sneakers and a pedometer, but hubby said I should wait. Since I’m trying to be responsible with my money, I think this is fair…but I’m probably going to buy them both sooner or later anyways. I haven’t gotten new sneakers in about 4 or 5 years!

After Dick’s, we made our way to Barnes & Noble where we perused magazines and hubby studied. I ate about 3/4 of this pecan twist, which was quite good, though I think it had cinnamon in it (I’m allergic, but not too badly). 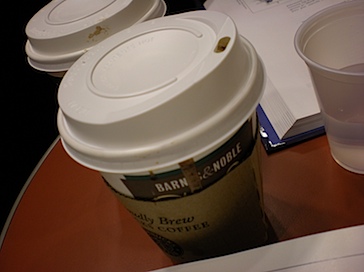 I also got a soy hot cocoa. Love these things! I ordered a kid’s but got a tall, so I couldn’t quite finish it.

It was everything I could do to not buy all the magazines I liked tonight. I love books and I love magazines and I find it hard to resist either. Since I’ve been trying to de-clutter, though, I’m seeing a trend…well, two, really:

I’d also like to work on clipping useful articles, photos, and recipes from magazines rather than keeping everything. Anywho, I still have to finish reading the magazines I already got last month, so I ended up only buying 1 new magazine, rather than the 3 or 4 I was eyeing. This isn’t a big deal to most people reading right now, but it’s a step in the right direction for me, and I’m proud. 🙂

Lots to do tomorrow:

Guess I better hit the sack and rest up! Gnight!