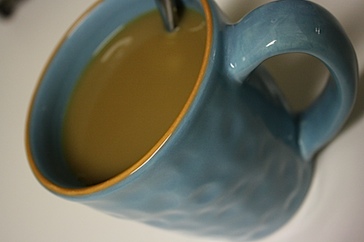 Since I’ve been going to bed later and not been as good about doing my bedtime rituals (reading, etc), coffee has been even more necessary than normal. This morning’s brew was 1/2 Fresh Market Breakfast Blend + 1/2 Hazelnut. 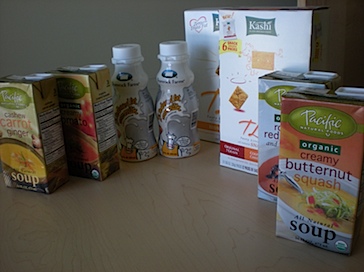 I had to stop by the grocery store on my way to work today and they have a Starbucks inside. Pair the convenience with my later bedtimes, not to mention I could really use more carbs on Friday when I have my dance workout, and you can see why I’m thinking of switching Bagel Day Monday with Starbucks Friday. I think Mondays are going to become coffee days and Fridays bagel days.

Anywho, there were some good sales at the grocery store so I stocked up on some Pacific soups (2 for $3) and Kashi crackers (they were $1 off!). I also got a couple milks for the morning oats. 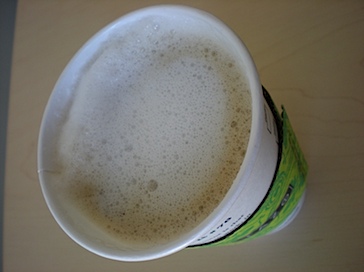 Since the weather had most things closed yesterday, I got coffee today. I had a grande hazelnut nonfat latte. Yum! 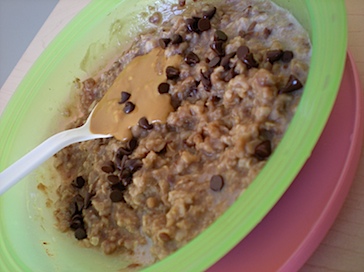 For breakfast I made Almond Butter Chocolate Chip oatmeal, but I forgot to bring any nuts to work to top the bowl off. Good thing I at least had the Barney Butter!

So good! I let a co-worker sample today’s oats and he said this was his fave so far. I really think he’s going to get some stuff to start making some breakfast oats. As for moi, I think I really need to bring a canister or oats and some measuring cups so I don’t have to pack as many tupperware! 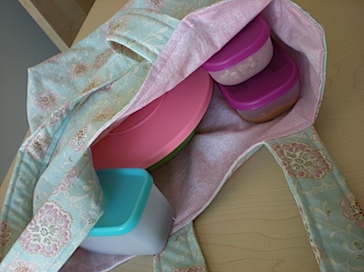 Speaking of tupperware, my new bag was multi-tasking as my lunch bag today! 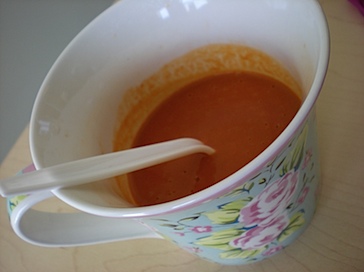 I was going to hit up the health food store to get some soup today, but ended up just breaking into one of my new Pacific soups – roasted red pepper and tomato. It was quite tasty, but I think it would have been better with some rice or beans stirred in to make it more substantial. I had half a container, which is 1 cup. 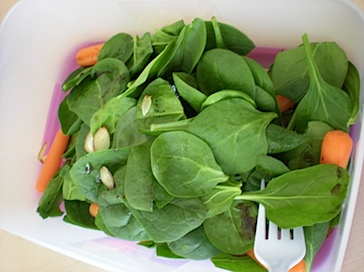 I also had another spinach salad, but twice as big as yesterday’s! Spinach is delish, but I’m craving some arugula right now! In the salad, I also added 6 baby carrots and 1 tbsp of sliced almonds. I topped the salad off with some Newman’s Own Light Balsamic Vinaigrette. 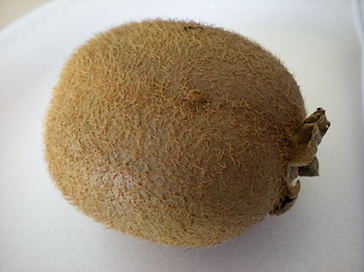 I was actually home this morning when our organic produce delivery arrived, so I quickly grabbed a kiwi to take to work. I was really excited about eating one! 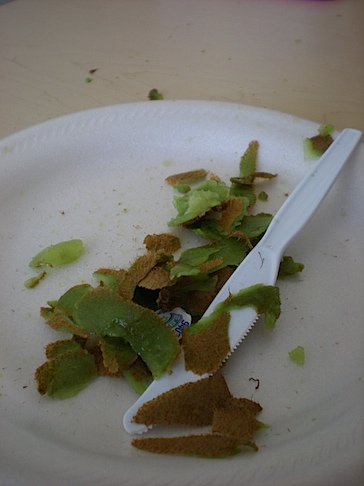 I brought a veggie peeler to take the skin off my kiwi, even though I read it was edible. Peeling the kiwi was quite the ordeal…it made a huge mess! Note green splattering in background that got all over my desk! I read, after peeling my kiwi, that you can cut it in half and scoop the flesh out. I’ll have to try something different next time. 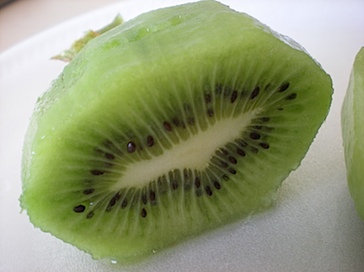 The kiwi was fabulous! It was so juicy and the vibrant green color was so pretty just to look at. 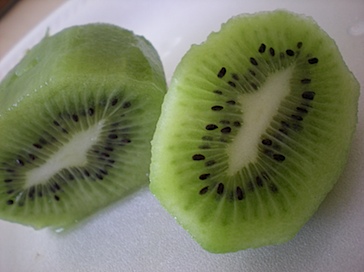 I gobbled my kiwi up in no time. It was so juicy and sweet! Now, I’m sad I only have 1 left! 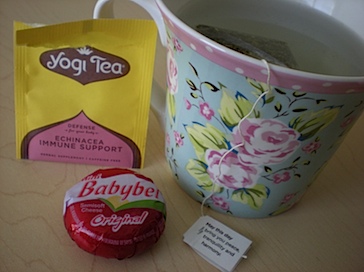 For my post-snack snack, I had a nice mug of Yogi Tea in Echinacea Immune Support to defend myself in this frigid weather. I also grabbed one of those yummy Babybels…they are just so good! 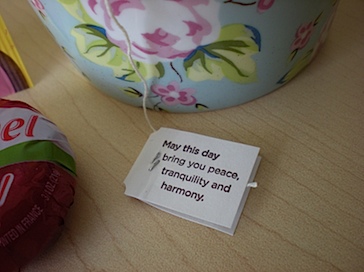 Yogi Tea quote of the day – “May this day bring you peace, tranquility and harmony.” 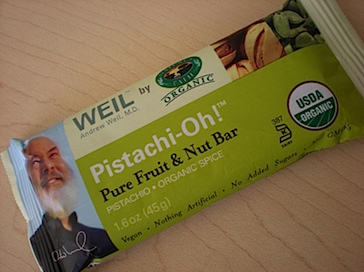 Since lunch was pretty light, I knew I was low on calories and again calculated that I was around 700. I decided to have yet another snack – a WEIL by Nature’s Path bar in Pistachi-Oh! 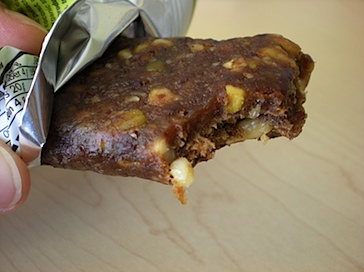 The bar was really good, but I think I like the Goji Berry flavor better. This one had a similar texture that sorta reminded me of a Clif Nectar bar (at least like the Clif Nectar Cherry Pomegranate bar). The flavor was kind of “spicy” – not hot, but more spicy like a chai tea would be considered spicy. 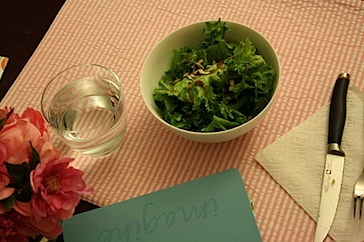 I guess hubby really wanted that pizza he didn’t get Sunday night because when I called on my way home, I could tell her really wanted pizza for dinner tonight. I was planning on roasting some chicken breasts so we could have roast chicken one night and use leftovers to make quesadillas – this is what Robin Miller did on a recent TV show and I thought both meals looked fab!

Anywho, hubby has been really good about going along with my healthy eating, so I gave in and pizza it was. I wish he would have told me wanted pizza before I had that Weil bar, though! 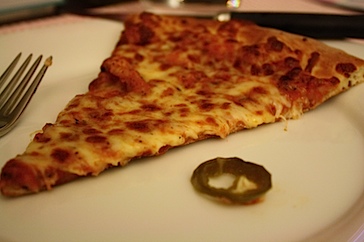 I had two pieces – one plain cheese… 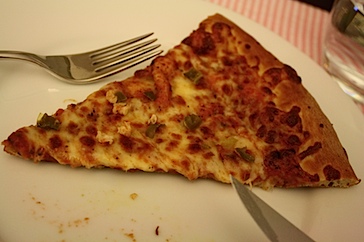 …and one cheese with a single jalapeno ring chopped into itty-bitty pieces and spread over the top. I never ate much spicy food growing up, but hubby loves spicy food so I’m learning to like it. I just can’t handle much at one time.

I normally eat 3 pieces of pizza but held back tonight at 2 to keep my calories low. I did feel a wee-bit hungry, but I wonder if I didn’t eat enough pizza or if maybe I’ve just been eating too much when I hate 3? Hmm… 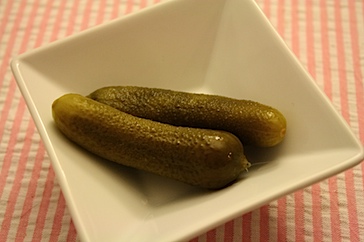 I had planned to eat an apple after dinner, but since I was already over my calories, I decided not to. I did however still kinda want something salty and when I figured out my TJ’s pickles had 0 calories, I got 2 out. It seems like cheating and probably is in some way, but I don’t care. They were good. 🙂

I didn’t work out today, so there were no calories burned. I probably did a few just from shopping and walking around, but I won’t add those in. I’m over my calorie intake goal of 1437, but it’s all good. I still getting the hang of things in calorie-counting land. I’m even thinking about busting out my scale to weigh some of my food to be more accurate.

I’m off to catch the end of the Duke game and get a foot massage! 🙂