Yay…I’m so excited about getting to use bigger photos for tonight’s post and all those going forward! 🙂 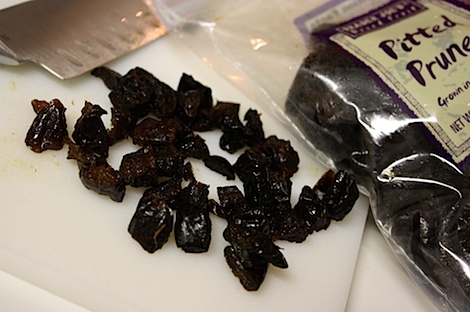 Hubby let me sleep in today, which was great because I found out yesterday a co-worker has the flu! Yikes! I hope I don’t get it. I did feel a bit groggy and achy today, but I wrote it off as being groggy from sleeping in too long and achy from my kick-a$$ zumba workout yesterday.

I decided to use some of those prunes I bought for my challenge this week to make some oatmeal. 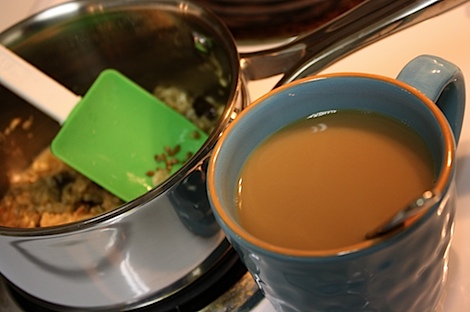 I sipped on some Breakfast Blend coffee with 2% milk and sugar while I cooked my oats stovetop. 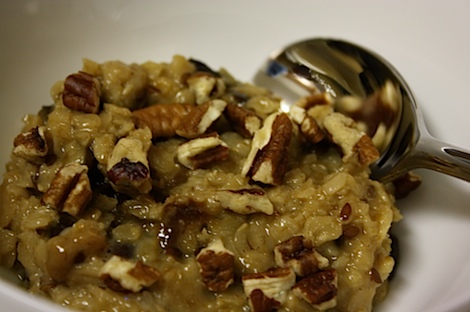 The mixture was pretty good, though I think I’m not as big a fan of the prunes as I originally hoped. Next time, I’ll try dried apricots or something.

The oats were so filling today! I only had about 1/2 the bowl! 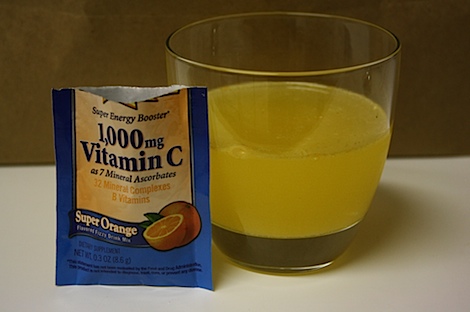 A friend of mine from zumba class gave me this EmergenC (free samples available on their site) to try after a conversation about it we had last week. Turns out, I’ve had the stuff before (she couldn’t remember the name when we talked about it the first time), but what great timing! I’m taking precautionary measures today to try to stay well, so I went ahead had had the EmergenC when I got home from runny errands with hubby.

This isn’t the best-tasting stuff, but it’s packed with vitamins and minerals and is supposed to help boost your immune system…at least that’s why I use it. 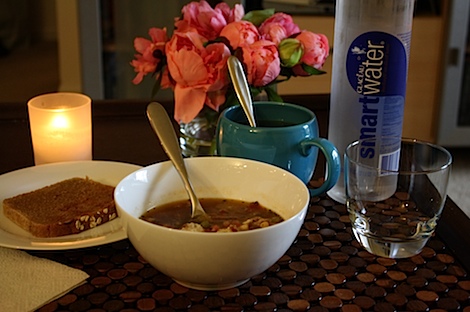 I tried to make lunch as comforting as possible to fight against the potential sicky-feelings I noticed earlier. 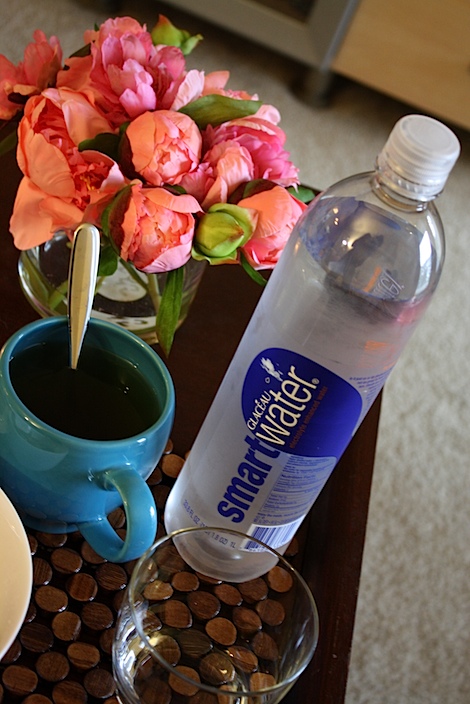 Pretty flowers, nice hot tea with honey, and smart water with helpful electrolytes (which I hear are good to drink when you’re sick). 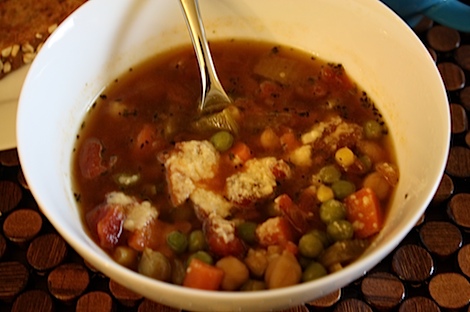 The veggie soup I didn’t eat last night (with some extra grated Parm/Regg on top). 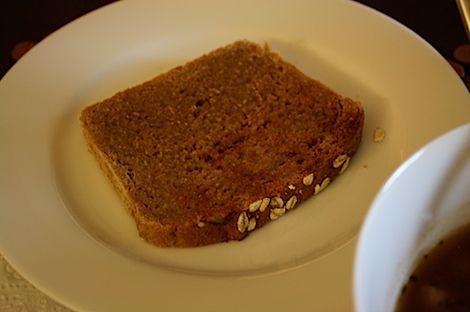 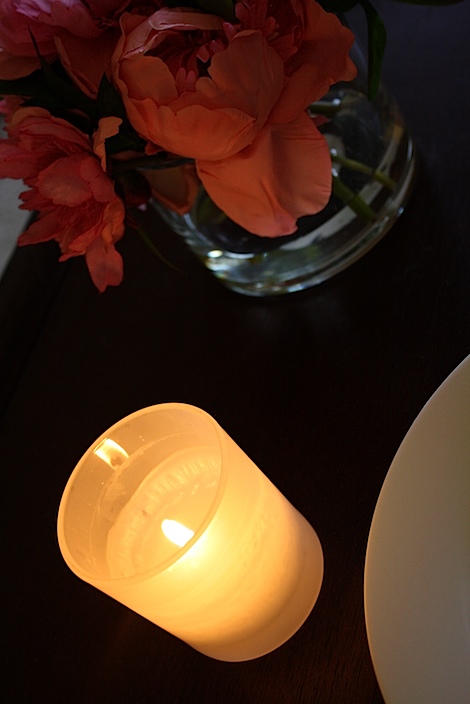 A candle to enhance the mood of relaxation and comfort. 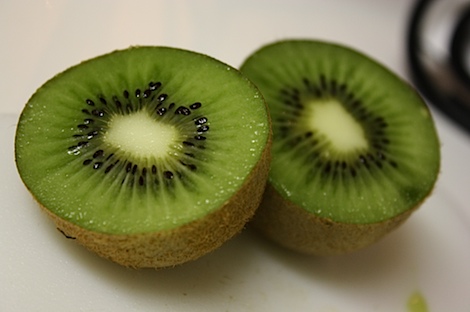 I had a kiwi for dessert…the first kiwi I’ve purchased in the store. I’m hooked on these since having them delivered via our organic produce delivery service. 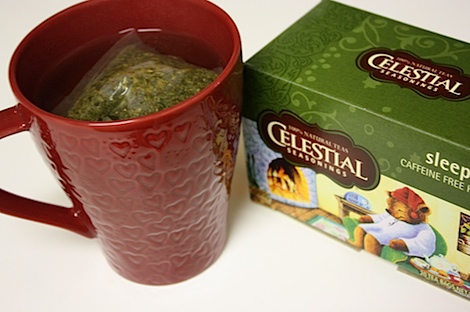 I realized over lunch I had a couple more errands to run in the icky, rainy, chilly weather outside (not good if you think you may be getting sick!), so I ran them as fast as possible and hurried back to make some more hot tea. I made some Celestial Seasonings Sleepytime – a favorite of mine since childhood and one that always makes me feel more cozy. I had my tea with some honey. 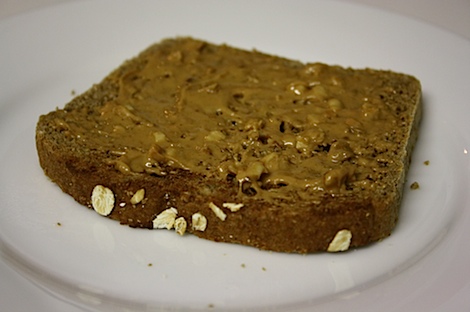 Hubby went to a friend’s place to watch the bball games this afternoon and I wasn’t sure when he’d return, so I had a piece of GH Oat Bran toast with TJ’s Valencia PB with Roasted Flaxseed. A combo made in heaven! I just need to try bananas on top some time like Kath does. 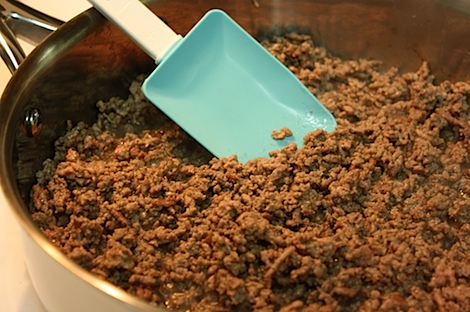 I saw some no-boil lasagna noodles at Trader Joe’s a few weeks ago and vowed to make some soon. This past week, I passed them again while shopping for groceries and decided to get ingredients to make lasagna for dinner this week. Tonight was the night. I’ve tried a couple lasagna recipes and they’ve always seemed harder than need be, so tonight, I winged it and made up my own recipe. I checked the box from the pasta to see the recommended cooking temp and time and went from there. 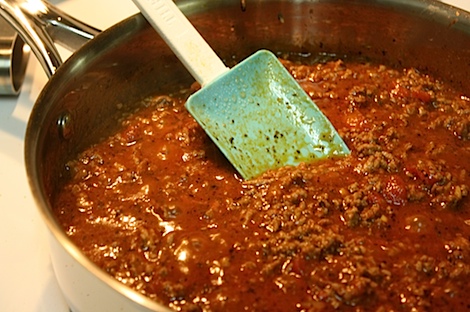 I started by making a simple meat sauce. 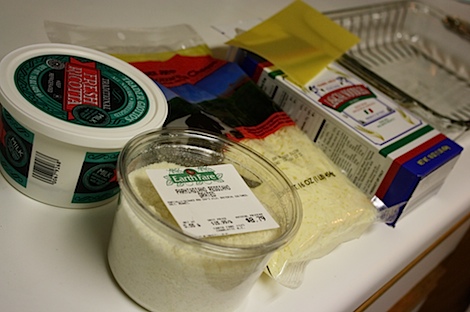 While the sauce cooked, I gathered my other ingredients. Once the sauce was done, I got to assembling – meat sauce on the bottom of the pan, then pasta, meat sauce, 3 cheeses, repeat. 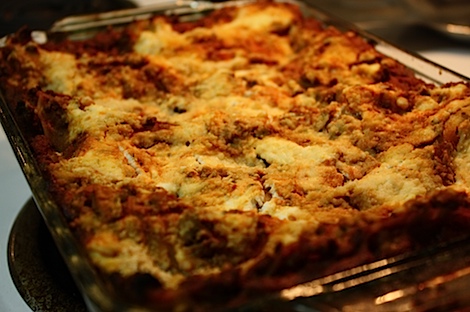 I cooked the lasagna with only ricotta and parm on top for the recommended length of time, then topped the pasta with a handful or two of mozzarella and baked for another 5. 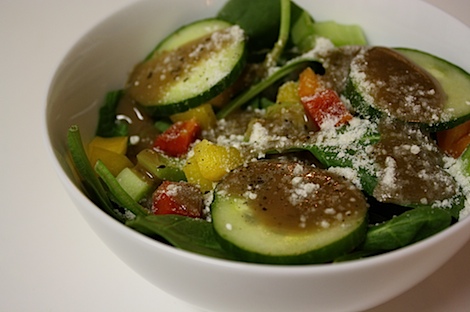 The timer went off while I was prepping the salads, so I checked to verify the cheese was nicely melted, closed the door with the lasagna inside, and turned off the oven. The oven kept the lasagna nice and hot while we enjoyed our salads. 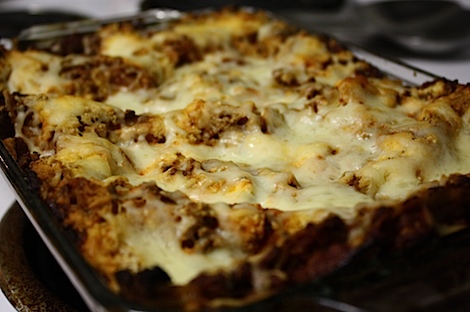 When the salads were done, I brought the yummy, gooey lasagna out so I could serve it up. 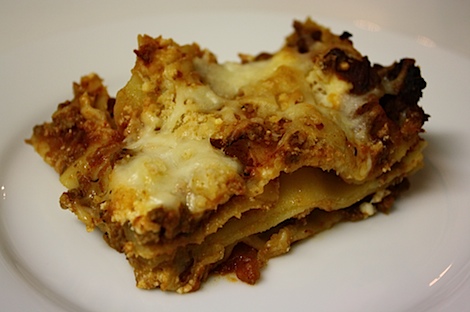 I had a pretty small piece and hubby ate about 3 times this much. All in all, I’d say my recipe was a success! 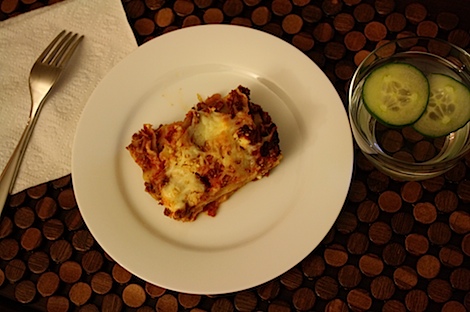 Dinner was simple, but quite tasty. Hubby loved it! 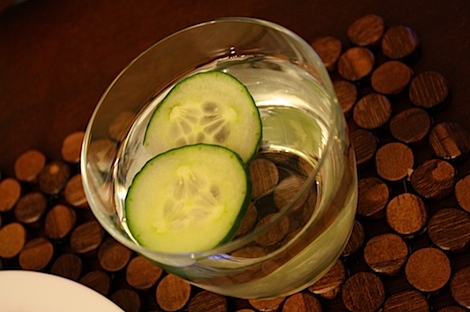 I had some spa water a la Ellie Krieger to drink – just smart water with 2 cucumber slices – it was very refreshing-tasting. 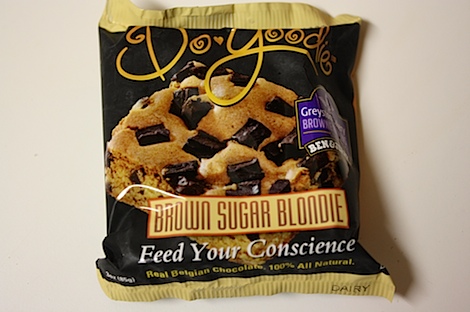 I was still craving something sweet, so I grabbed this Brown Sugar Blondie by Do Goodie and halved it with hubby. Thank goodness I halved it because the nutrition info on the back was for only 1/2!! 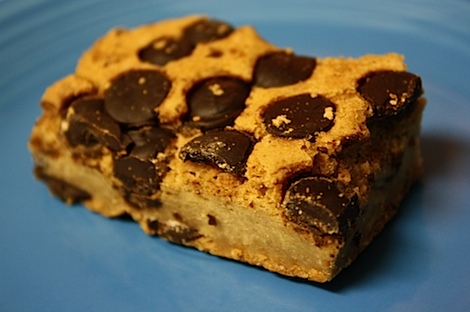 The brownie is half-eaten as I type and pretty darn tasty. Hubby wanted to know if we had more in the fridge (we didn’t) because he liked it so much. I liked that the company supports charity and that the ingredients were touted as “all natural” and I could understand what pretty much all the ingredients were (no strange chemicals here!). 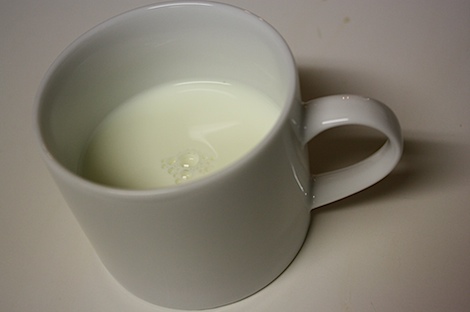 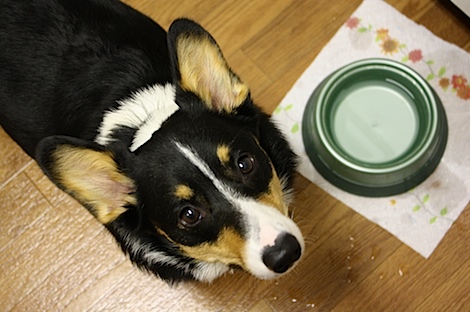 Bailey was very curious as to what I was doing when I halved the dessert bar. Too bad for him his puppy eyes don’t work on me!

Much better than yesterday! Guess I should have eaten my half of the bar a day sooner! I am a bit over my goal of 1437, but I figure it balances out with yesterday’s unusually low calorie count. Let’s hope I feel better tomorrow…I so don’t want to get the flu!