I realized the other day that I never posted the rest of the photos from my Orlando trip that I promised, so here is Day#2 of our vacation, when we went to the most magical place on earth – The Magic Kingdom:

Before you reach the park, you must first pass the parking toll where you pay $11 (yes, $11!) just to park in a big flat lot with hundreds of thousands of other cars who also paid $11 a pop. 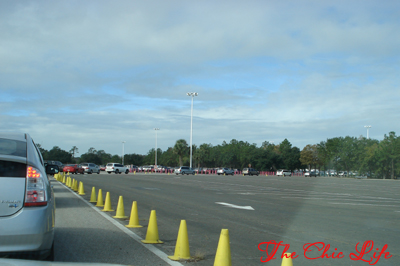 Then, you are corralled into the aforementioned large, flat, parking lot where your car and its contents will bake in the sun all day (don’t leave anything that could melt in your car). 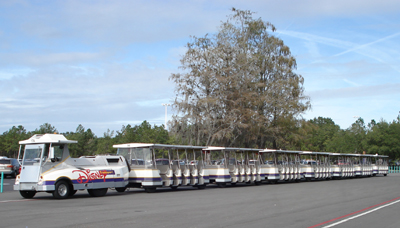 If you park far enough away from the park (we were at least one mile, possibly five…can’t remember), you are picked up by a little bus-like car-thingy, so you can save your feet up a bit for all the walking you’ll do in the park. 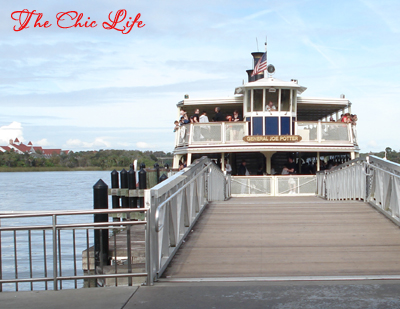 After you are dropped off by the bus/car thingy, you have the option to ride the monorail or the ferry.  One of the things I remember most from my childhood trips to Disney was the ferry ride to the park, so we, of course, chose that. 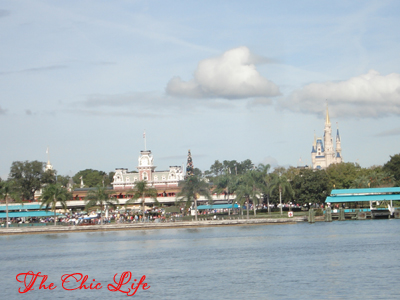 There!  See in the background!?  It’s Cinderalla’s castle!  Now you know you’re almost there! 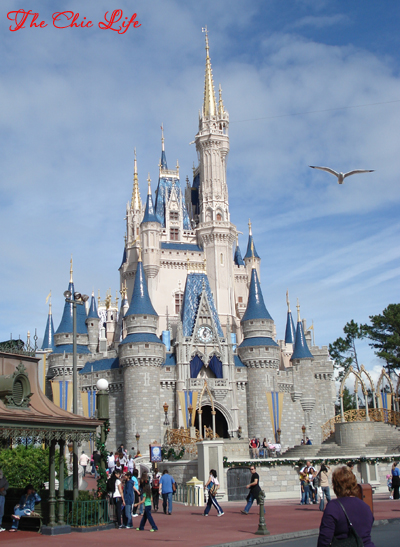 A quick trip through baggage check and the ticket gate and the next thing you know, you are there!  The castle is right in front of you!  Can you believe that seagull flew right into my photo?  I didn’t photoshop that in there – I swear! 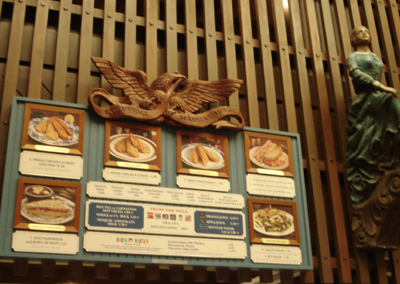 You may expect this to be the part where I tell you about the first, fabulous ride we get on, but we had a timeshare presentation to sit through in the AM back at our hotel, so once we got to the park, it was time to get some food.  We headed straight for Liberty Square so we could go towards the area with my favorite rides.  We ate at Columbia Harbour House which featured fish and chicken fingers – a great lunch place – I recommend it. 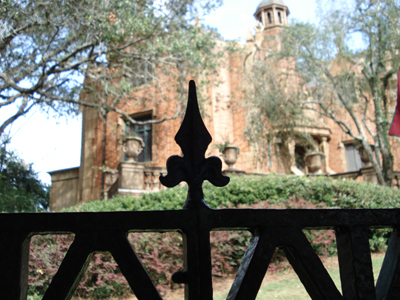 Next, it was on to possibly my favorite MK ride (and a very thrilling one at that), The Haunted Mansion, which boasted only a 30 minute wait.  The wait when you get close to the door is the best – just read the tombstones – you’ll see. 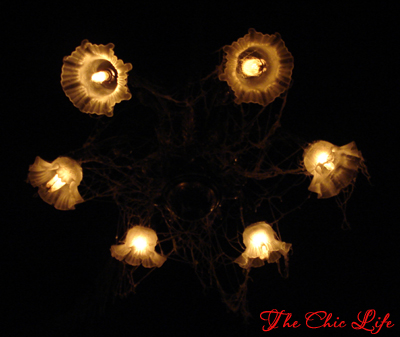 It was too dark to take photos inside, but I did manage to snap this cool photo of a chandelier above.  The ride was just as good as I remembered it to be with all my favorite scenes – especially the ballroom – such cool special effects.  I should have gone on this one twice, but there was so much more to see in the park. 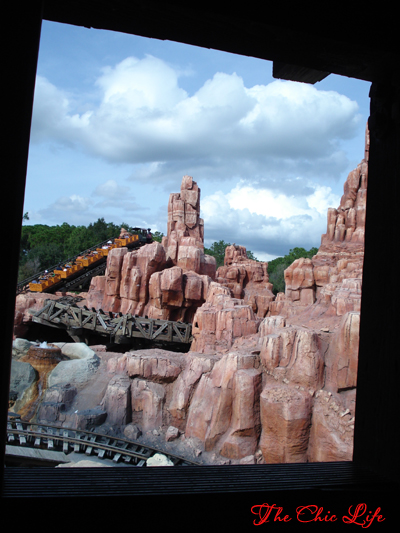 Next we headed to Frontierland to hit up coaster Thunder Mountain, which also boasted a 30 minute wait, but ended up taking more like an hour and 30 minutes. 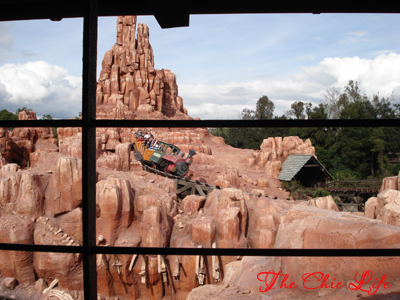 Oh well, at least you get a good view of the ride from line. 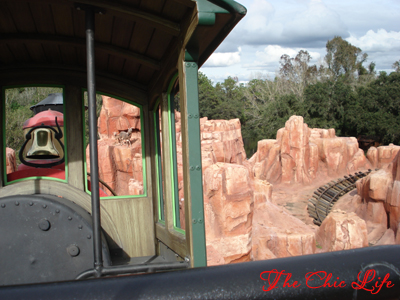 We also lucked out and got to sit in the front!  Woohoo! 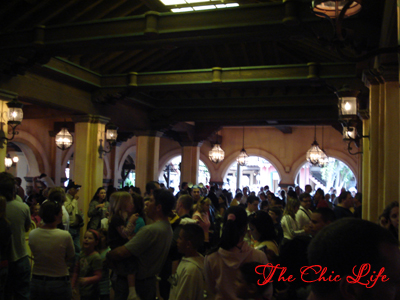 Would have hit up Splash Mountain next, but it was closed.  Waa!  Instead, we headed over to Adventureland to visit the Pirates of the Caribbean ride.  We waited in a super long line as you can see from the photo – we weren’t even to the "inside line" yet.  They don’t show these kinds of photos much, do they? 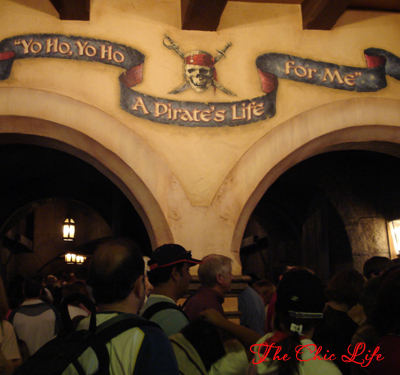 At least the line was in the shade, right? 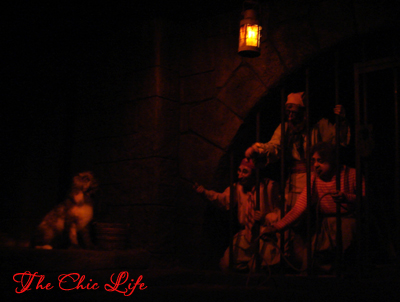 I managed to take one clear photo from the ride.  This is the scene I remember most from my childhood trips on the ride – they included it in the movie when they filmed.  Sorry it’s so dark!

After the pirates ride, we hit up the bakery on main street and got a gigantic cinnamon roll and some other sweet treat I can’t remember.  They were both excellent, but we really should have just split one snack.  After our snack, we went to Tomorrowland and went on the racecar ride – I’d suggest skipping this one if you’re not with kids – I thought it was the TestTrack ride, which is actually at Epcot.  Anywho, while we were on the racecar ride, it started sprinkling, so we made a quick trip to Fantasyland to visit a one more of my childhood faves, before heading off for dinner. 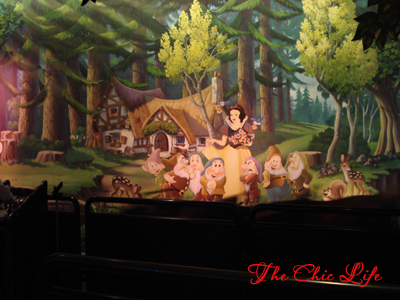 Yup – Snow White!  My mom still tells me to this day how scared I was on this ride as a child – apparently, I was very frightened by the evil queen. 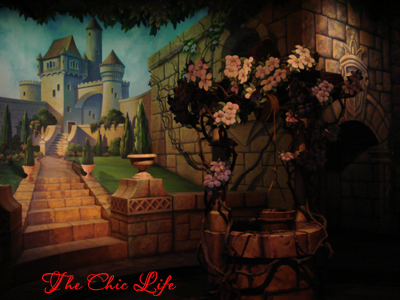 Isn’t the theming wonderful?  You almost can’t tell what’s real and not.  The ride actually circles that little flower-covered well, although from this photo, it almost appears to be painted on the wall behind it.  I suppose it was a bit silly to make my SO ride this with me considering we don’t have any children and this is, afterall, a child’s ride, but there’s something special to visiting something so sentimental, no matter your age. 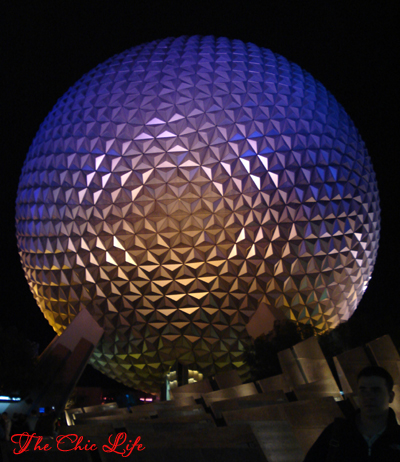 Since we had park hopping passes, we left the Magic Kingdom and headed to Epcot for dinner.  When I was younger, we actually lived in Orlando, and we had season passes, so, we would often go to Epcot for dinner.  Not an every night of the week kinda thing, but for special occasions.  Anywho, I love eating at Epcot because they have all the different Pavilions for different countries and it’s an awesome opportunity to sample cuisines from different parts of the world.  I’m not sure how authentic they are, but they can be closer than what you may have back home. 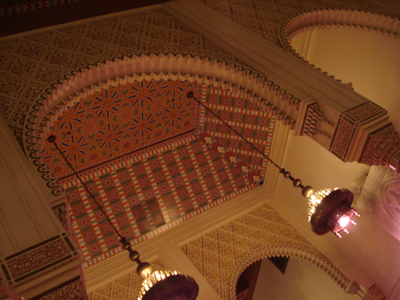 We went to a little hidden gem called, Restaurant Marrakesh, in the Morocco Pavilion.  It’s an often overlooked restaurant, which means you can usually get in with little to no wait.  The food is delicious and it’s really not too "different."  Honestly, this may just be my favorite restaurant of all the Epcot options. 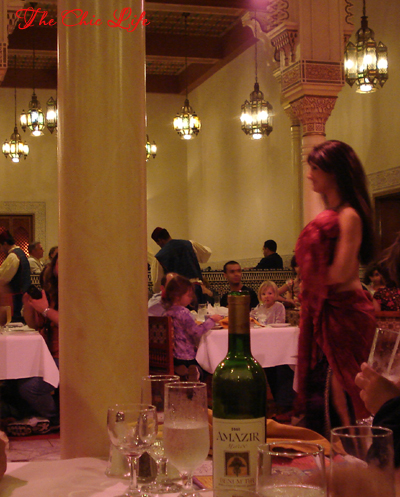 They even have belly dancers.  If you have kids, you may like to know that the belly dancer lady will let the children come onto the dance area and dance with her – they love it! 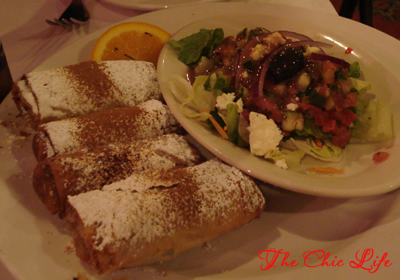 For our meal, we started with a glass of wine and a beer and a sample appetizer.  The sample appetizer has two chicken and two beef springroll-type rolls and a small salad with chopped veggies and a vinaigrette dressing.  All three were delicious, but I highly recommend you try one of the spring roll appetizers at a bare minimum.  They are filled with savory chicken or beef, fried, and topped with powdered sugar and cinnamon – it sounds weird, but trust me, they are sooo good! 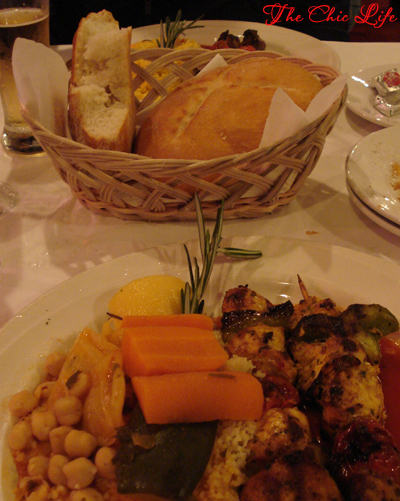 I don’t know why people don’t seem to like this restaurant as much as others.  Perhaps they think the food will be bizarre?  I dunno…but I love the food!  For my entree, I got chicken kebabs with couscous.  They were so much better than any kabobs I’ve had anywhere else and were served with a light tomato based sauce.  Even the couscous was filled with flavor and was served with an assortment of veggies and chickpeas.  Even the bread was good! 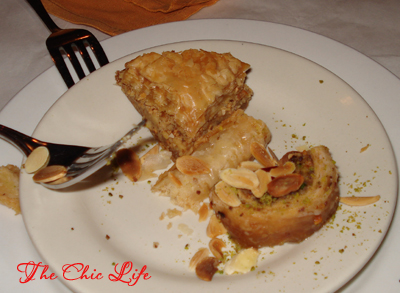 For dessert, I got a baklava sampler plate – yummy! 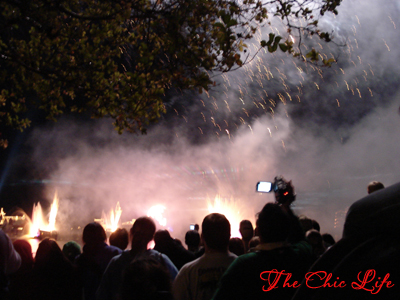 After dinner, we were just in time to catch a fireworks show. 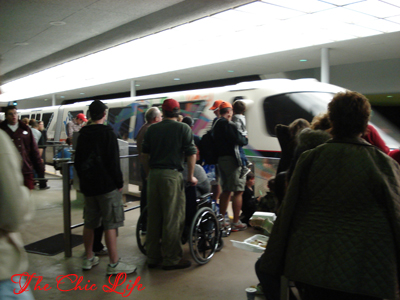 After the fireworks, we caught the monorail (two actually – one to the MK monorail and one to the parking lot), back to the long bus-things, and back to our car.  We had planned to head back to the Magic Kingdom as it was a Saturday and the park was open till 11PM, but were just too tired and decided to save our energy for the next day.  Phew!