I started off today in a bit of rush, trying to get some stuff pulled together for hubby while he slept in, so I rushed out of the house without food or coffee. It all worked out ok because I was able to smoothly pull off his breakfast in bed V-day treat, so the lack of caffeine was worth it. 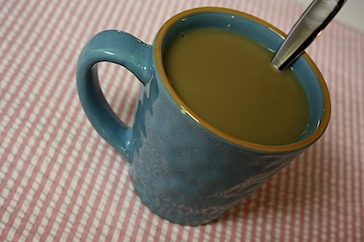 After delivering hubby’s breakfast, I was ready to get some caffeine and food. I had a cup of the usual – FM Breakfast Blend with sugar and 2% milk. 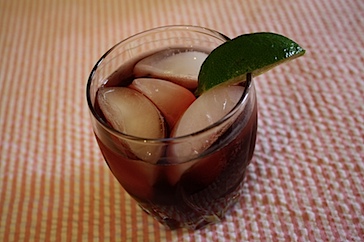 I also made myself one of those pomegranate juice mocktails, which was quite tasty. 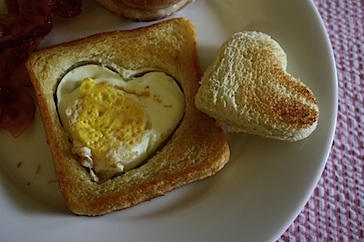 I went ahead and made myself the same thing hubby was having…I was curious to see how it tasted and it wasn’t too much trouble to put together a second time. Here’s the egg and Texas toast… 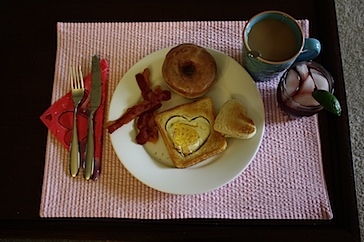 I also had 2 pieces of bacon and a donut. I really shouldn’t have had the donut since I ate so much Thursday and had the pastry last night, but it’s Valentine’s…the weekend to indulge in all things sweet…at least that’s what it is for me. 🙂 Everything was quite tasty! 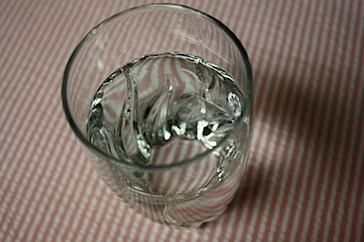 I was so busy doing hubby’s treat and baking cupcakes that I totally lost track of time. I did go ahead and have some water… 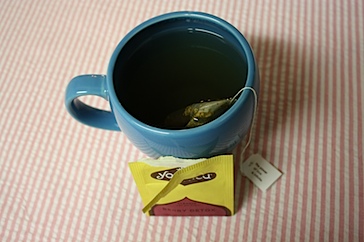 …and some Yogi Tea – Berry detox. 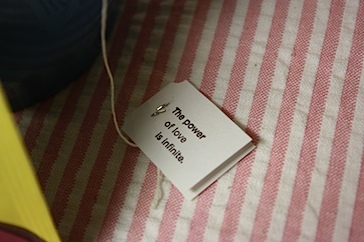 Yogi quote of the day – “The power of love is infinite.” How appropriate!?

I was hoping to do a more rigorous workout, but totally ran out of time today. Normally, I would shrug off working out complete, but ended up doing a quick walk with hubby. We went for about 30 minutes with Bailey, who loved every minute. I liked the walk, too…it was quite energizing and a nice break from all my errands. 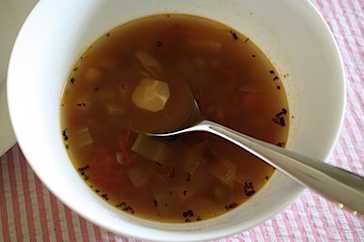 I can’t believe I let myself wait so long to eat something again. I really should have had a snack, but was so busy doing things that I totally forgot! I finally had some leftover veggie soup, which we defrosted from the freezer. 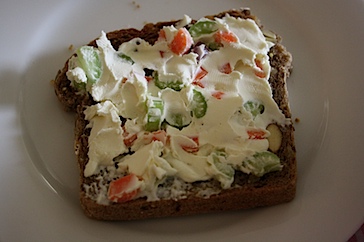 And, I whipped up a quick veggie cream cheese using veggies from the fridge (red onion, carrots, and celery), which we spread on toasted GHBC bread. Yum! I love how hearty their breads are – especially since they grind their own wheat.

I am going to have to work on not letting myself go for so long without any food, busy or no-busy!

I did have a bite of a cupcake (sans frosting), which hubby was taste-testing for me, and one of the cut-out hearts smeared with frosting. 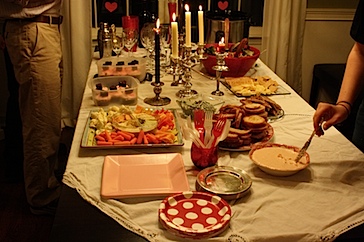 For dinner, we had plans to head over to Kath and Matt’s place for a Valentine-themed potluck party. 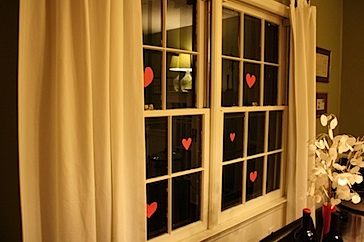 Their place looked so cute with little hearts everywhere. 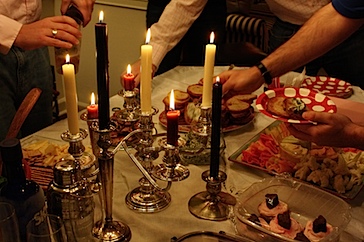 There were plenty of good eats, including Amanda’s mushroom risotto and Nate’s assortment of Trade Joe’s goodness. 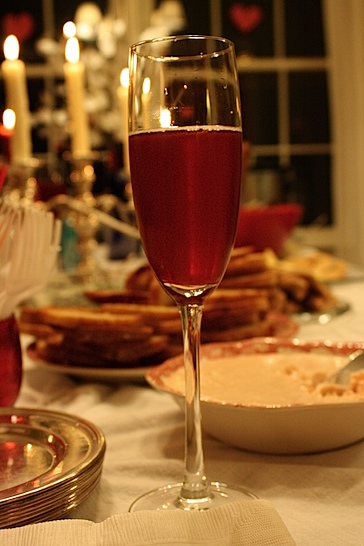 I kicked off the night with a pom-tini. It was so fruity and delicious…a great cocktail to start things off. 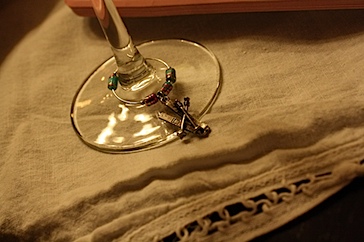 I had the ski wine charm with cute turquoise-y beads. 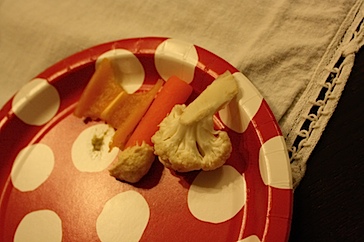 I nibbled here and there throughout the night and did my best to capture everything, though I I know I missed a few things. I had a few bites of veggies with various hummus-type dips. 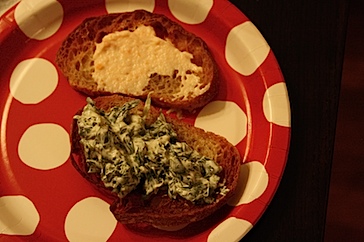 Then a couple pieces of toasted bread with Kath’s Smoked Salmon dip and Nate’s Spinach Artichoke dip. I love dips and these two were fab! 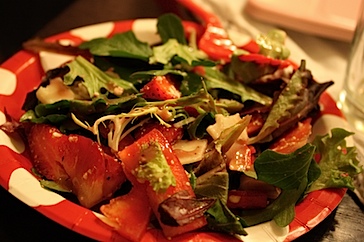 Next, I moved on to Kath’s salad, which featured mixed greens and all red/white ingredients – red pepper, strawberries, cranberries, and cheese. I drizzled my salad with some Annie’s raspberry vinaigrette. The berries were so fresh and the salad combo was divine! 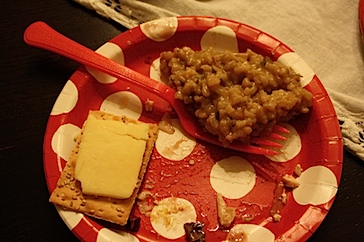 Next, a cracker with some fab Vermont white cheddar and some mushroom risotto. I normally don’t like mushrooms, but I do like some mushroom dishes, and this risotto was one of them. I should have gotten a little more of both of these! They were good! 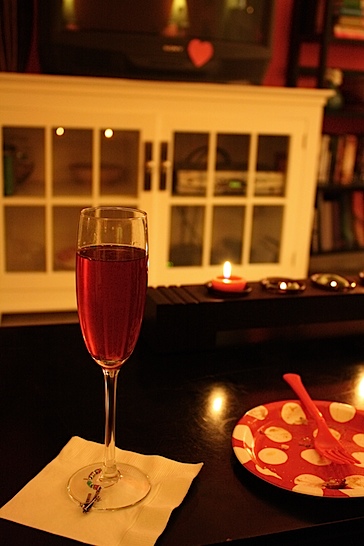 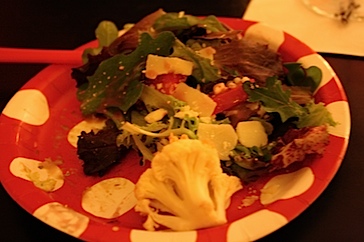 Then, salad and veggies #2. I ate some of the veggies before taking the picture. I also sampled 2 kashi crackers (honey sesame and 7 grain), which I didn’t photograph. 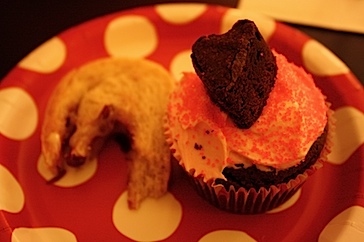 And last but not least – dessert! I had a half piece of some white-chocolate cherry dessert bread (yum!) and one of my brownie cupcakes.

We had a blast at the potluck! It was so nice spending the night with friends instead of bothering with the fuss of long waits, etc on one of the busiest restaurant nights of the year. I can’t wait for the March potluck!! 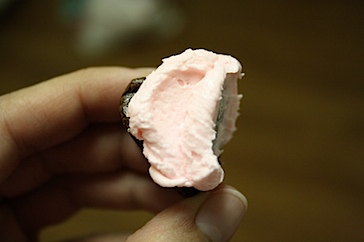 When we got back from the party, I couldn’t resist having 2 more of those mini hearts smeared with more yummy frosting. 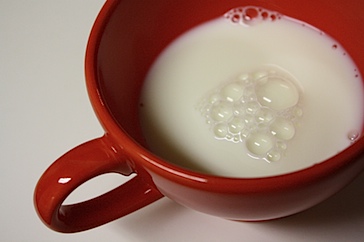 I washed the sweets down with a tiny mug of milk – about 1/4 cup.

Not the best day of eating for me what with the huge gap of no food in the middle of the day and all the sweets, but I did pretty good getting lots of veggies at the pot luck at least. 🙂