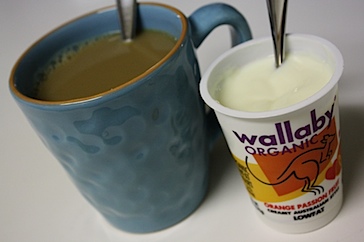 I had early brunch plans with some girlfriends today, but I knew I had to eat something beforehand. I was hoping my usual breakfast brew with some yogurt wouldn't spoil my appetite, but it kinda did. I guess it was good because it kept me from eating too much at brunch? 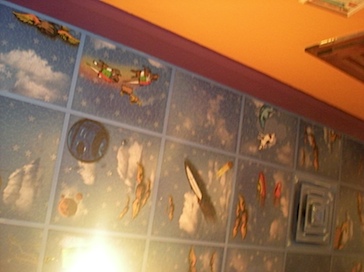 I met up with Kath and Kelsey for an amazing brunch at The Flying Biscuit, a restaurant suggested by Kath. Check out their cool ceiling! The inside of TFB was super bright and fun. From the ceilings… 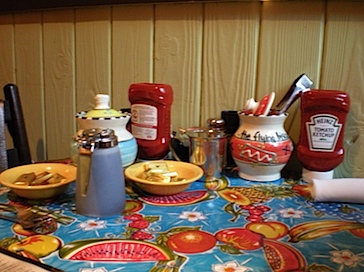 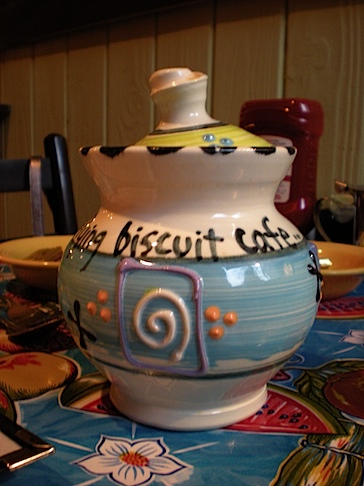 They had some nifty pottery. I asked if this had pickles in it, but it didn't… 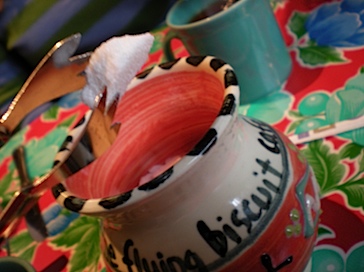 …it had sugar! Two please! 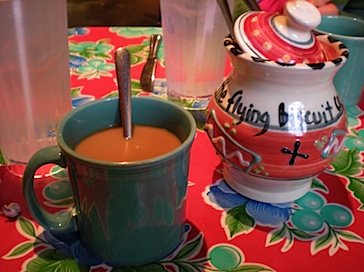 I ordered a coffee to go with my meal and added about 2 or 3 sugar cubes and a bit of cream. 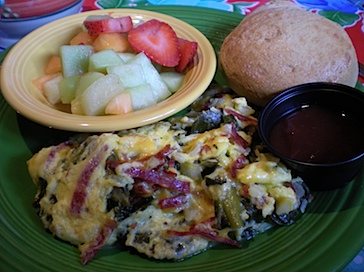 I ordered the Southern Scramble with a regular biscuit and fresh fruit. The scramble was made with 3 farm-fresh eggs, collard greens, turkey bacon, onion, and cheddar cheese. 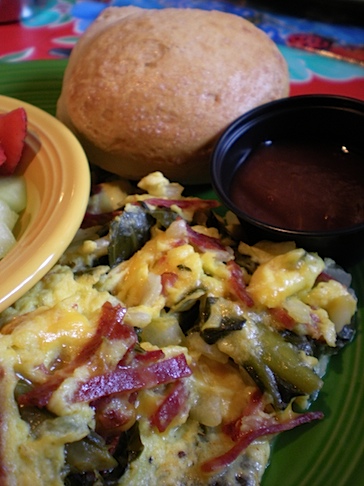 It was sooooo good! I think we're getting collard greens in this week's produce delivery, so I may try to re-create the dish at home. I doubt I'll be able to do their delicious biscuits, though! 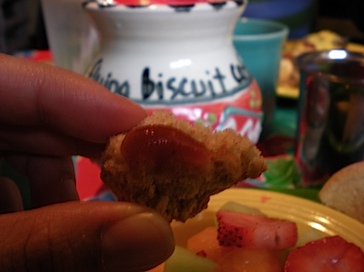 I got a couple samples from the girls. I had a piece of Kath's whole wheat biscuit… 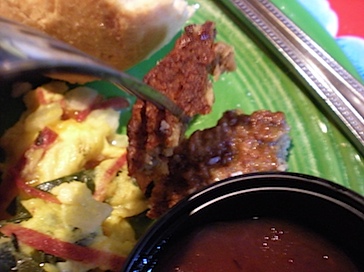 …and a bite of Kelsey's Soy-sage, which was my first taste of a vegetarian sausage. Me likey! Kelsey said she likes these on English muffins…I think they would make an amazing addition to my breakfast rotation. Gotta find some! 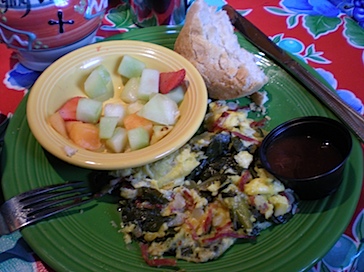 I did what I could with lunch, but I guess that yogurt filled me up more than I thought it would. I had probably 1/3 of the eggs, 1/2 the biscuit, 1/2 the fruit, and 1 cup of coffee, plus some water. I packed up the leftovers to bring home to hubby.

After brunch, it was movie-time! We saw The Reader, which was a really great movie. I thought the whole thing was sad, but quite beautiful at the same time. The scenes were set nicely and all the filming of the old buildings reminded me of when I stayed in a small downtown area of a city in France – Besancon. 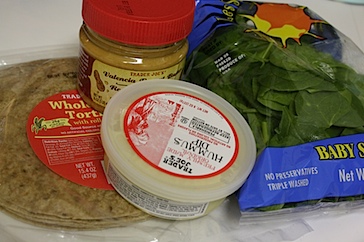 After the movie, us girls hit up TJ's and sampled a couple goodies – some chicken tenders in a tomato chutney, cheese, wine, and sunflower butter. The sunflower butter was better than I thought it would be – sort of sweet but distinctively sunflower-y. I'll have to think about getting some. I did end up getting the Valencia Peanut Butter with Roasted Flaxseeds, some TJ's hummus, baby spinach, and whole wheat tortillas. I feel like I got a pretty good deal since all this was just under $10! 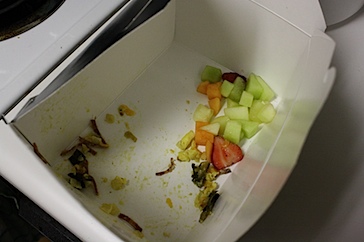 After TJ's, I headed home with my new food goodies and brought back my brunch leftovers for hubby, who prompted ate them right up! 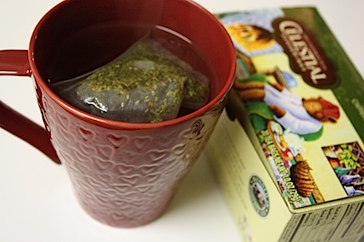 Once home, I brewed some nice, hot tea since I was so glad to be inside from the cold, drizzly weather. I had some comforting Celestial Seasonings Sleepytime with some honey. 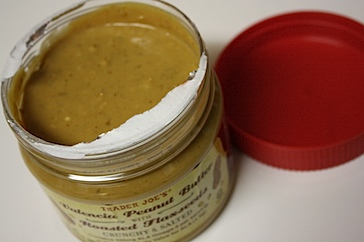 I also was ready to dive into my new PB. I love getting new things and can't wait to try them out! 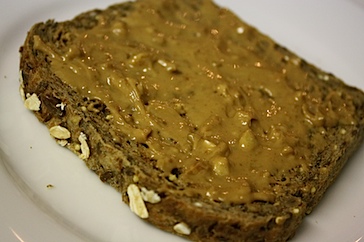 I thought the new PB was quite tasty! I was so glad I got it. 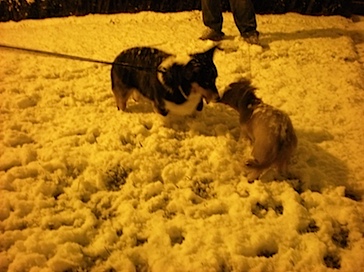 Hubby wanted to order pizza tonight. I was working on a project, post to go up tomorrow since it's so late already, and he kept dropping hints all night that he wanted pizza. He even tried to lure me into his pizza trap by offering to get Pizza Hut – my fave and his least fave. Sneaky, sneaky.

Luckily, while we were playing with Bailey in the snow (yup we got some!), he changed his mind. 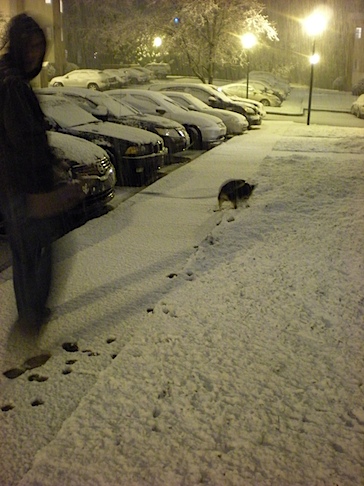 Bailey was going crazy in the snow…he kept trying to eat as much as he could…it was pretty funny. 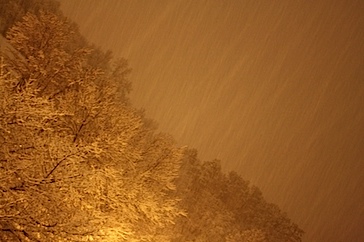 The snow was coming down pretty heavy for awhile there, but we'll have to see how things look tomorrow. I hope they let us work from home tomorrow. People don't know how to drive in snow/ice around here, myself included. 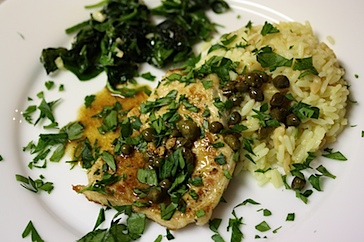 I cooked up some boneless pork in a lemon butter sauce that I made up with some capers, which I served with some of that baby spinach sauteed with garlic and a bit of rice pilaf (thanks Kath!). 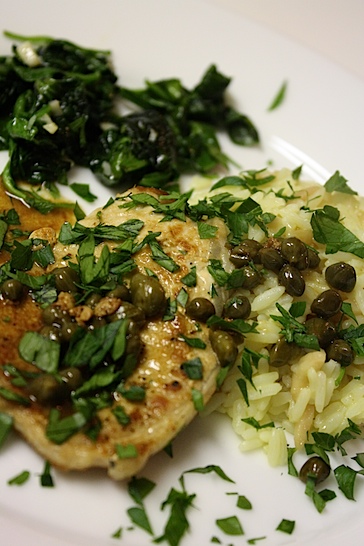 Dinner was fab, especially considering I threw it together last minute and got to use up some leftover lemon and some capers that had been hanging out in my fridge for awhile. 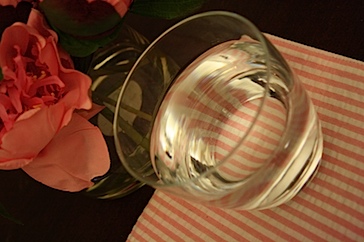 I just had some water with tonight's dinner. 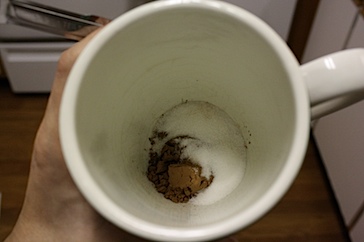 I got pretty caught up in tonight's project and totally lost track of time, but still really wanted to have some hot chocolate to celebrate the snow. 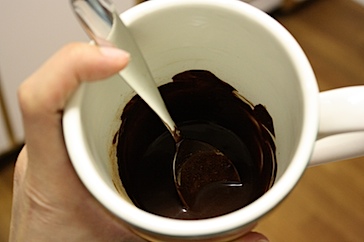 I whipped up this hot chocolate recipe from Ellie Krieger (click) that comes together pretty fast. 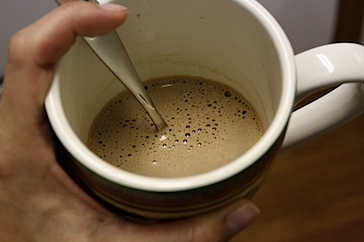 It doesn't make much, but it sure hits the spot! I just wish I had some whipped cream!

Since I got lost in my project tonight, I didn't have the chance to enter my calorie info for today, but I'm guessing it's not terrible since I did pretty good on portioning and stuff. Who knows, though…I'm not good at estimating yet.

I'm also posting my challenge stuff tomorrow. Wow…lots to do tomorrow already! *crossing fingers I can work from home* Wish me luck with the weather/commuting! G'night! 🙂