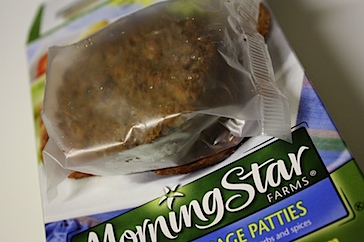 I broke into my Morning Star “sausage” patties and decided to test hubby while sweetly making him breakfast at the same time. 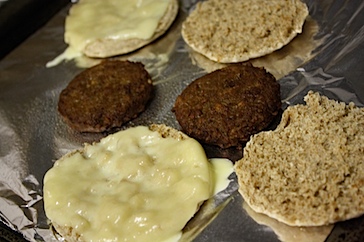 I cooked the sausage patties in the oven so I wouldn’t have to watch them (stovetop) while I got ready. When the sausages were wrapping up, I toasted the english muffins (whole wheat, mind you…I had to practically force myself to get the “good” ones over the more tasty regular ones), then added the muffins to the baking sheet, topped with havarti cheese, then back into the oven so the cheese would melt. The English muffins were a suggestion by Kelsey and a good one, too!

The pieces of havarti I had were gigantic, so I broke off about 1/3 of each slice and saved them for later. Little did I know how soon I’d be eating them. 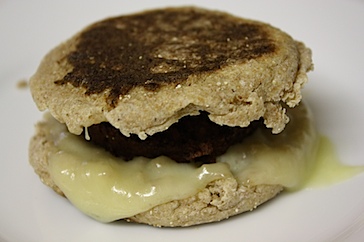 I gave hubby the muffin sandwich and asked him what he thought of it. He liked it! Neither of us like sausage all the much, so this was a pretty good fit for us. I swear they had “soy-sages” at the Flying Biscuit for brunch this past weekend. I feel like the ones today were more veggie-based? Not sure if they’re really the same thing just being called different, though. 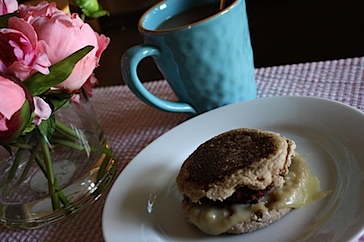 The morning was bright and I was thankful for lots of sun to help wake me up. I had a blend of 1/2 caramel macchiato and 1/2 breakfast blend for my morning brew with sugar and 2% milk. So good! 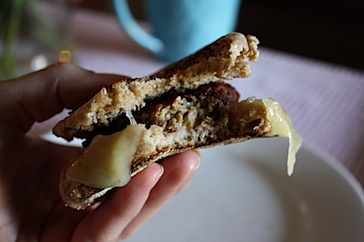 The sausage breakfast was surprisingly good (for hubby) and surprisingly filling, too! I probably shouldn’t have finished the whole thing when I started feeling full, but it looked so small. I’ll try to listen to my body better next time. 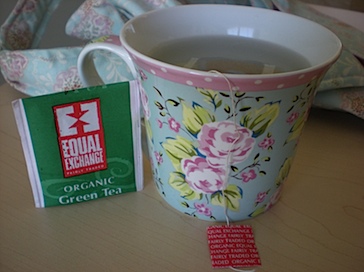 I made some tea at work this AM to wake up and get warm. I even had the tea without honey! I first started drinking tea without honey at the dim sum restaurants where they don’t even put sugar on the table. It tastes pretty darn good without honey, though I think I do prefer with. 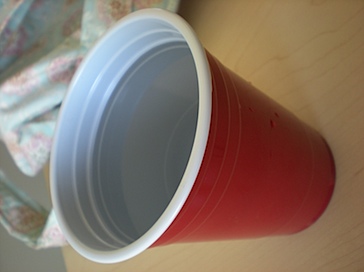 I also made an effort to try to consume liquids early in the day with this big cup of water. 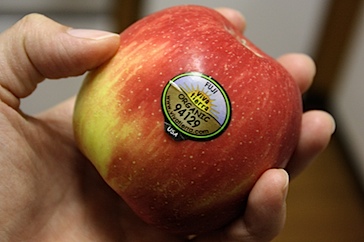 I also had a nice, organic fuji apple from our delivery as a snack…mmm…so good! 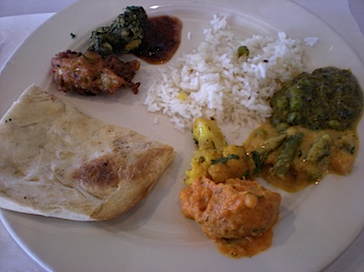 Round 1: I went with a couple co-workers to an Indian buffet. I don’t know about you, but I fell into a bit of an eating run a couple years ago where I was starting to get bored with the foods I was eating. I felt like I’d tried all I could try. At least, I did till I tried Indian for the first time. It was like a foodie’s dream come true with a whole new world of flavor bursting from the dish I selected that day (Tikka Masala). The spices were so delicious and different. I was ready to try more, but didn’t have the opportunity till recently.

Today, we hit up the buffet and I tried a little bit of almost everything. 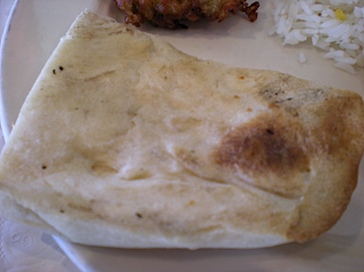 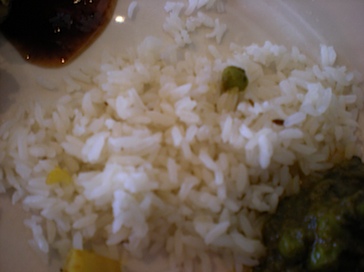 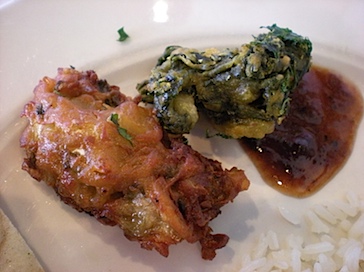 some deep fried vegetable apps with a sweet chutney sauce, and 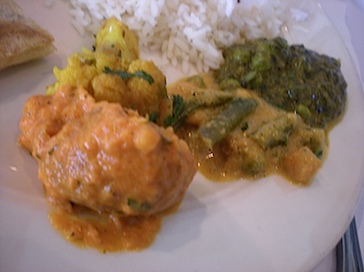 some vegetarian dishes. I really wanted to write down all the dish names, but I ran out of time. I’ll do better next time…promise! 🙂 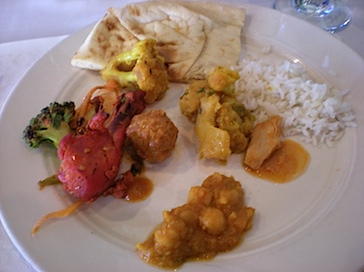 Round 2: I probably shouldn’t have had the second plate of food, but I was so curious about the foods and everything was tasting so darn good! I couldn’t help myself and totally ate my way up to an 8 on the Hunger Continuum, which I haven’t hit in a long time. Tsk, tsk… 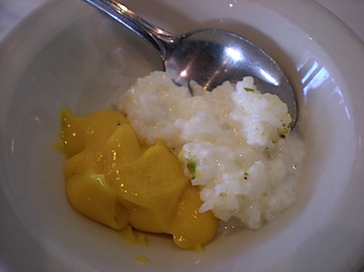 Dessert: The best part of the meal was, of course, dessert! I had a wee bit of mango pudding and rice pudding. Next time, I’ll have to eat less food so I can have more dessert! And so I can be more responsible with my food-intake, of course.

Lunch was delish, though, and I’m already looking forward to the next time we go…even though we don’t have any plans made yet. 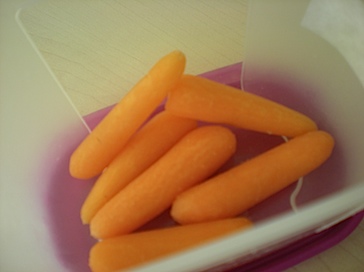 I knew yesterday we were getting Indian today, so I was sure to pack an extra light snack – baby carrots. I had that TJ’s hummus on hand, but knew I wouldn’t want any. Just the pure, sweet, and natural flavor of the baby carrots…so refreshing! 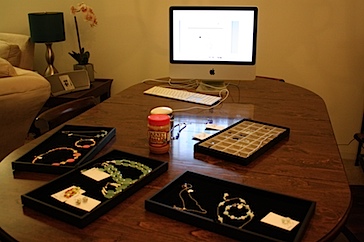 As soon as I got home, I had to prepare for my friend Emily to come over to do some jewelry design work. Since my place is a bit of a wreck and I haven’t quite gotten my hands around my mess, I had quite the time doing speed cleaning, which meant moving a lot of things into other rooms and out of the living room/dining room area. heehee. I’ll get to it later.

I set up the dining room area so we could look at my jewelry web site for my jewelry biz, D Celestine, and have lots of space to look at jewelry designs and beads.

And the Barney Butter? I decided to pay-forward the sample Kath gave me awhile back when we went to her place for dinner by giving my friend Emily a taste. I think she liked it…kinda. 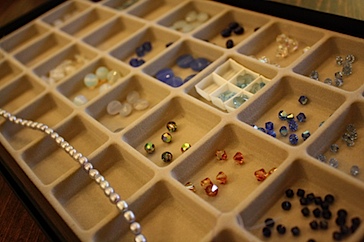 Anywho, Emily is having me design and make the jewelry for her wedding party, which is one of my fave projects to do! Weddings are so fun!

I busted out all my blue beads of various shapes and sizes and even broke out a couple non-blue beads to show her some sizes and shapes that were available in the blue color she wanted. 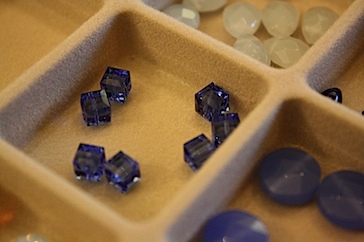 We settled on Swarovski crystals in the “sapphire” color, but instead of these cubes, we’ll go round. We talked through the various designs she wanted, so I’ve got it all in my head and just need to order some supplies so I can put them together. Yay! 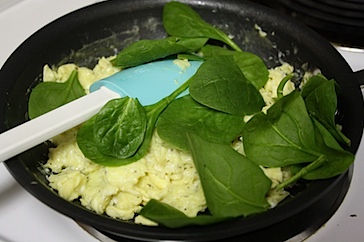 Emily and I had such a good time looking at beads, bridesmaid dresses, and just catching up on life, we hardly knew 9:30 pm had snuck up on us.

Luckily, I had supplies on hand to make a quick dinner – egg wraps and water. 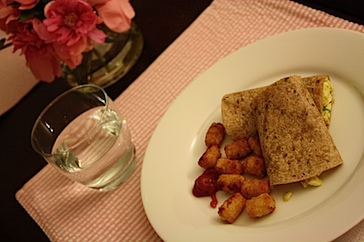 I used to have a terrible habit of late-night snacking that caused me to gain weight, so I ended up giving myself a hard-stop to eating of 9PM. That was a long time ago and I don’t late-night snack like I used to, so I wasn’t upset at all about eating so late…especially since dinner was pretty light. 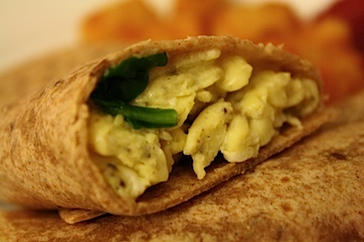 The wraps were quite tasty and I’m definitely going to have to try one for breakfast some time soon. The wraps were by TJ’s and were the whole grain kind that has 26 g of whole grains per serving/tortilla…nice!

I got the tater tots going in the oven and near the end of the cooking time, started scrambling the eggs. When the eggs were near done, I added a handful of spinach to the pan and tossed till the spinach wilted. When the tater tots were done, those came out of the oven, the oven went off, and I put the tortillas laid flat, topped with cheese down the middle until the cheese melted.

The meal was super simple and surprisingly satisfying. Hubby even tried dropping hints that he wants this again for breakfast. Not sure if I can do 2 meals of egg wraps back to back, but we’ll see. I’m kinda feeling oatmeal already!

Not doing so hot on the bedtime rituals for SCBR again…I’m supposed to be asleep right now! I’m hoping to get in bed by 10pm so I can read like I did last week. Maybe tomorrow is the day!

No exercise again today unless you count frantically picking up around the house, which I’m not going to add into my fitday.

I had a really hard time adding in the calories for the Indian buffet, partially because they weren’t really in fitday and not so easy to find via google but also because I had so many different dishes! I tried…I think I’m kinda close.

Ooh, and as for exercise, I think I’m getting new running shoes tomorrow! Yay!