Spiders and menu plan success? Yes, they are both in this post…

Today started off with a creepy scare. The coffee was brewing as I headed out my front door to take Bailey out to do his morning business. As I was walking out the door, I suddenly noticed a spider right in front of my face. I backed up just in time, which was lucky because I literally would have walked right into it had I kept going. I brought Bailey back inside, got a large envelope and swept (ok, threw the envelope at) the spider to the right of me and quickly withdrew. I was standing there trying to figure out where the spider went when I felt something fall on my head. It was rainy out, so I assumed it was a drop of water because that’s what it felt like.

I got a second envelope and swept around at the open air in front of me to ensure I had removed all traces of spider web…and hopefully, all traces of the spider, too. For some reason, I decided to look up at the bottom of my front porch to see if there was a lot of water accumulated and if I may get hit with another droplet. To my dismay, I realized that there, in fact, no water above me. So what the heck just fell on my head anyways?! I shrieked and ran to the bathroom in a panic. I pictured a large, hairy spider crawling around on my head and frantically checked myself in the mirror. I didn’t see any spiders, but I was still flipping out. I bent over, took my hair out of the clip that was holding it up, and shook out my hair. No spiders.

To make a long story short, it’s now the end of the day, and I haven’t seen any spiders. Let’s hope that it was water that fell on me earlier…that’s what I’m telling myself at least since I haven’t seen any indication it was something else.

But, enough about today, let’s backtrack…I wanted to tell you how I did with my meal plan from Monday. I know a lot of you guys are good with meal plans, but I am not. I was pretty worried I wouldn’t be able to stick to the plan hubby and I came up with.

Here’s how we actually did…

We did have those burgers like we planned on Tuesday. I decided to not take a picture of it, but it was good. 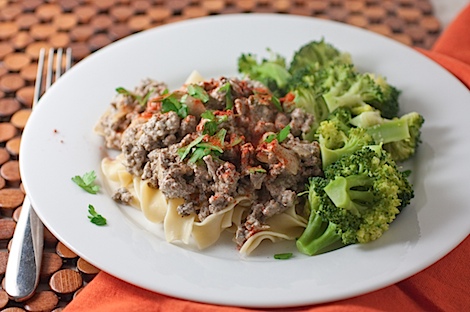 On Wednesday, I made my mom’s beef stroganoff. Someone requested this recipe once, so I think I’ll post it. *Update – the recipe has been posted – click here to view* I’ve been eating this dish since I can remember, so it’s definitely a winner. We had steamed broccoli for our veg. 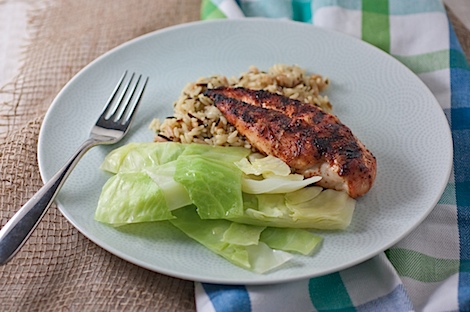 On Thursday, I cheated on Eat in Month. My company invited me to small lunch get-together. I forgot to mention in my original list of rules, but I decided to make exceptions for work-related events. It’s one thing to challenge yourself…it’s another to be unprofessional or miss out on an opportunity with your team. We ended up going to a restaurant that specializes in Southern cooking, so I got the fried chicken, macaroni and cheese, collard greens, and beets. Since that was pretty much what we were planning to do for dinner, we decided to change plans. Hubby grilled chicken breasts, and I made a rice pilaf (from the box) with some steamed cabbage. It was simple, affordable, and it tasted great. I was pretty happy with Thursday.

On Friday, I fell off the wagon again. This time I don’t have a good excuse. I actually just decided to cheat (on Eat in Month and the meal plan). I left home in the morning in a rush and got to work a little later than I wanted. I ended up leaving work in a rush, too, thanks to a phone conference that ran over by 20 minutes. I drove through rainy, rush-hour traffic to get to an important event – Zumba instructor auditions. Two years ago, it was my turn on stage. Tonight, it was my friend Shamecia’s. She did fantastic, but she hasn’t found out yet if she made it. Whether she makes it or not, we headed out after auditions to celebrate her hard work. We each got beer flights and shared 3 different things: chicken fingers & fries, a Philly cheesesteak and sweet potato fries, and Margherita pizza (no picture again). 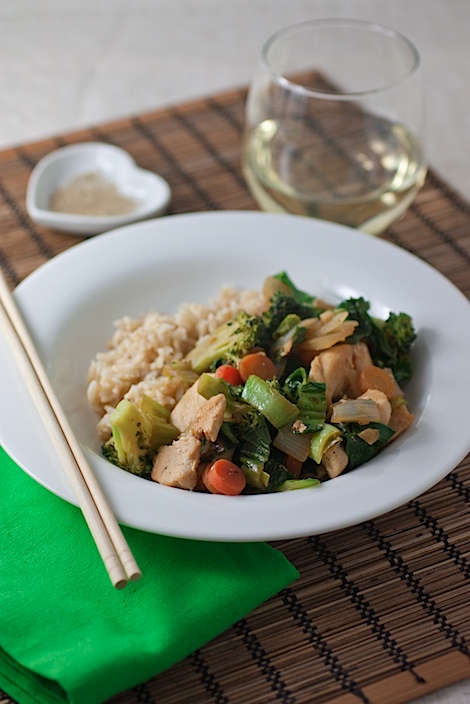 And as for tonight…dinner was inspired by Chinese New Year’s. My friend and I were hoping to find something fun to do for the holiday. I considered going to get dim sum, but I think I’ve cheated on EIM enough so far. I had heard about some events going on this weekend to celebrate the upcoming Chinese New Year’s, but when I searched for them, I didn’t find anything. So, I just invited her over for a simple stir fry. It’s not authentic, but it tasted good.

Anywho, I hope everyone else doing Eat in Month is doing better than I am!

I have quite a few recipes queued up now, so I just need to figure out which one to post first. Any requests?

Reader question: Did/will you celebrate Chinese New Year’s? What did/will you do?