I woke up at my parent’s house to this awesomeness… 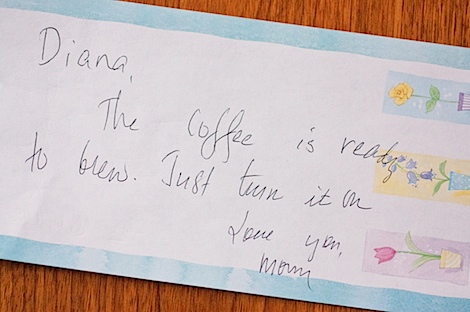 a handwritten note from my mom. She woke up before 5 am this morning to get ready for work and still prepared a pot of coffee for the family. I didn’t care as much about the coffee, but I did love the note. She used to write us notes all the time growing up, and I miss them. 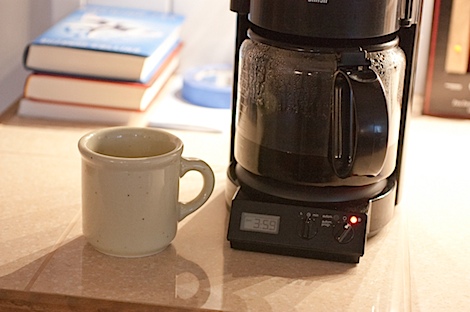 Mom got some samples of the new Starbucks Blonde coffee, so we had that with breakfast. 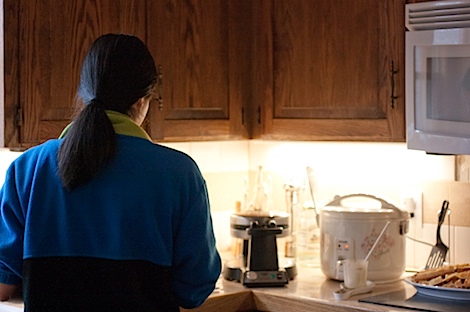 Sis woke up in the mood for cooking. She made us waffles using the waffle iron she got for Christmas two year ago. 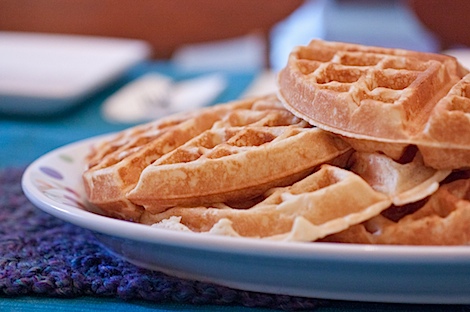 She found a special recipe online for extra-fluffy waffles. The trick is whipping egg whites and then folding them into the rest of the waffle batter. From the looks of the waffles, I think she’s onto something. 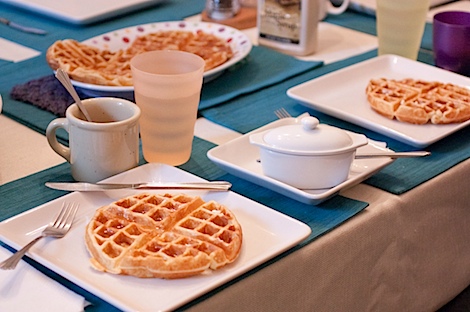 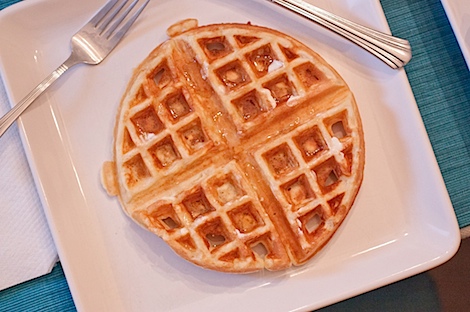 It’s been awhile since I’ve had from-scratch waffles. Actually, I don’t think I’ve had them since the last time Sis made them.

I asked my dad to tell me about his early life again over breakfast. He’s told us the stories hundreds of times over the years, but they never get old. I guess part of the reason is because I never really knew my grandparents, and they’ve all passed, so I like to get to know them through my parent’s stories. And every time dad tells a story, I learn another gem of information. For example, recently, I learned that my grandmother’s favorite color was light turquoise (like TCL-blue!) and that she studied fashion design at the Moore College of Art & Design. She even designed and sewed her own clothing. I wish she was around still so we could have sewing sessions together and talk fashion. 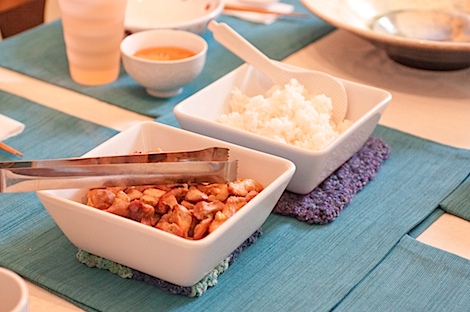 My sister decide to make lunch for us, too. 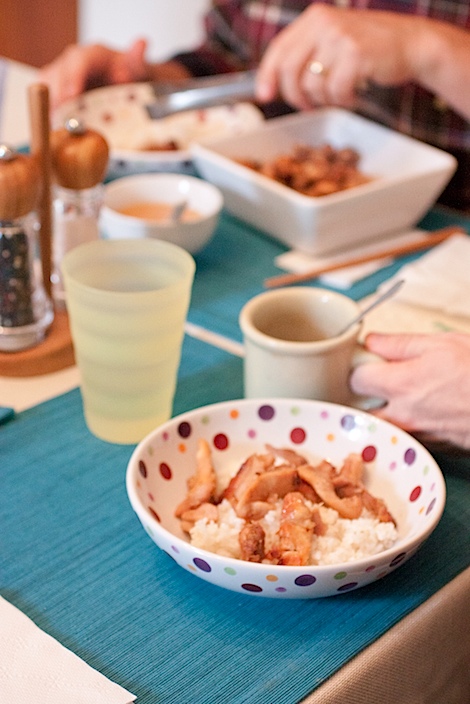 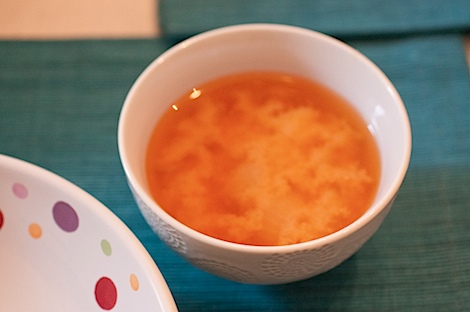 Miso soup {with onions and potatoes}. 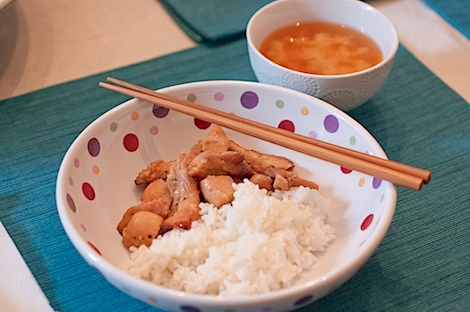 It was all delicious, and I ended up eating too much. But, I did save room for dessert. 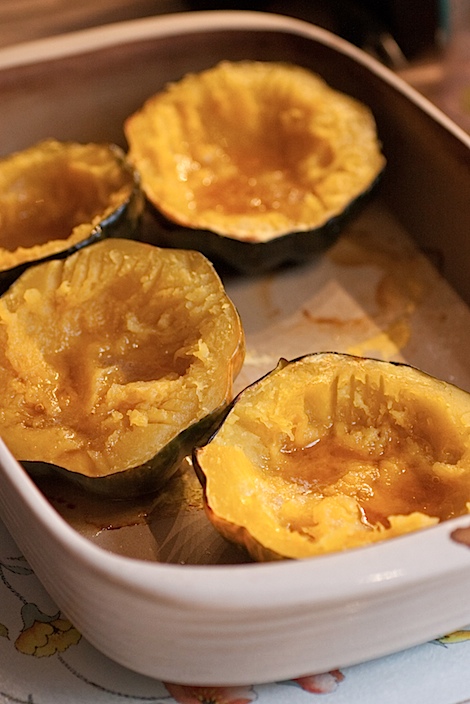 My sister {who actually hates most vegetables} has recently fallen in love with winter squash. She made us roasted acorn squash with maple syrup and butter for dessert.

I know it sounds a little odd, but it was actually good and made for a great dessert. I told her she could save any leftovers to make a squash oatmeal for breakfast like this one I made awhile ago. Sounds weird, tastes great!

As for all that menu planning talk from yesterday…interestingly enough, hubby suggested we work on a meal plan on our car ride home. I don’t think he actually read yesterday’s blog post, but maybe he did. Either way, I agreed it was a good idea, so we worked on a draft on our way home. 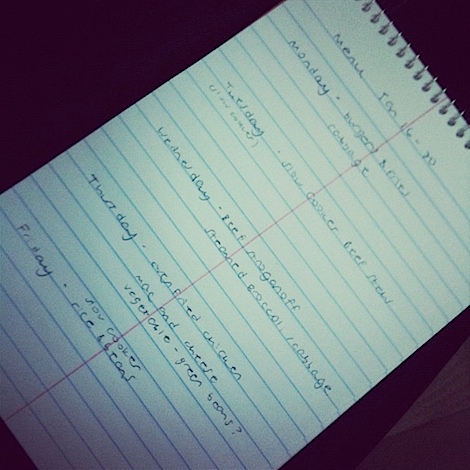 I don’t love it, but it’s a start. I’ve realized that sometimes I don’t menu plan because I don’t think I’ll do a good enough job…so, I just do nothing at all. But, I suppose a so-so menu plan is better than none at all, right? Plus, perhaps menu planning is like most things – it gets better with practice? I like to think so.

What are your menu/meal planning tips? I loved the one Jackie left the other day saying to use categories or themes. My family (mom, dad, sis) actually likes to do that when they menu plan, and it definitely seems like a great idea. And reader Dione suggested having lazy/easy dinners and freezing batches of food. Hubby and I were actually just talking today about how we used to eat easier meals back in the day and that we should start doing so again. And I’m a big believer in freezing food – especially soup! Any other ideas, guys? Share your meal planning tips in a comment.

10 thoughts on “Meal Plan in Action”