When Alex Guarnaschelli says to go to Husk, you go to Husk. 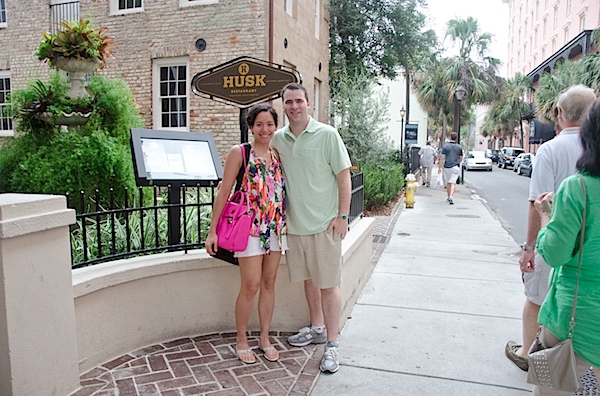 So, that’s where we ended up on Sunday for brunch, our last meal of my Charleston birthday vacation.

In researching restaurants prior to the trip, Husk was on my list of places to visit. A couple different friends and co-workers had recommended it, plus they had great online reviews. I actually had a really short list of restaurants I wanted to visit. I knew I wanted to see Husk and Poogan’s Porch…Kickin’ Chicken if it worked with the trip and then I had a couple other places in mind if any of the others didn’t work out. We had already booked reservations for Circa 1886 for Friday and then Poogan’s Porch for Saturday, so I was thinking we wouldn’t be able to make Husk this trip. But then this happened… 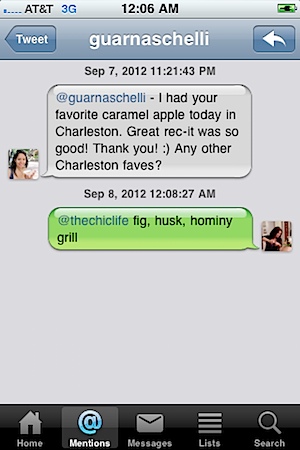 I tweeted Alex Guarnaschelli to thank her for the delicious caramel apple recommendation and then asked if she had any other faves. And she actually replied! How cool is she? Her response? “Fig, Husk, Hominy Grill.” I’d seen Fig online during my research and the place looked great. And my friend Erica had suggested Hominy Grill, which also sounded fab. But considering I had Husk picked out as somewhere I really wanted to try and then to have Alex recommend it, too…I knew it was meant to be. 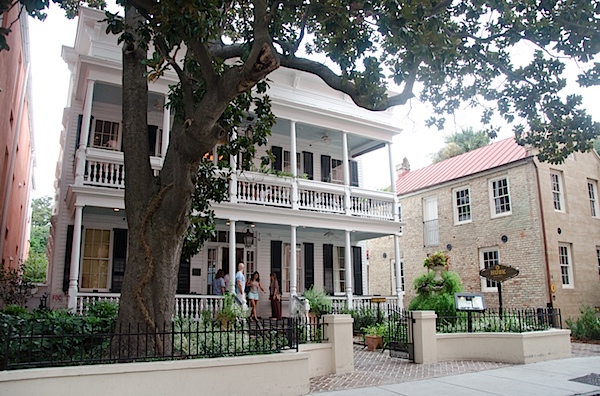 Since Husk was right next to Poogan’s Porch, we stopped by on our way home from dinner the night before to inquire about brunch. They did serve brunch, but they were also booked for reservations that Sunday. The hostess did say we could show up and they could see if they could accommodate us. On Sunday morning, we decided to go for that and skipped breakfast at the hotel to walk over to Husk. We arrived just at 10am (when they open) and were told by a friendly hostess that they could seat us in 5 minutes. She shoots…she scooooooores!

Like Poogan’s Porch, Husk is located in a beautiful, historic home on Queen Street. 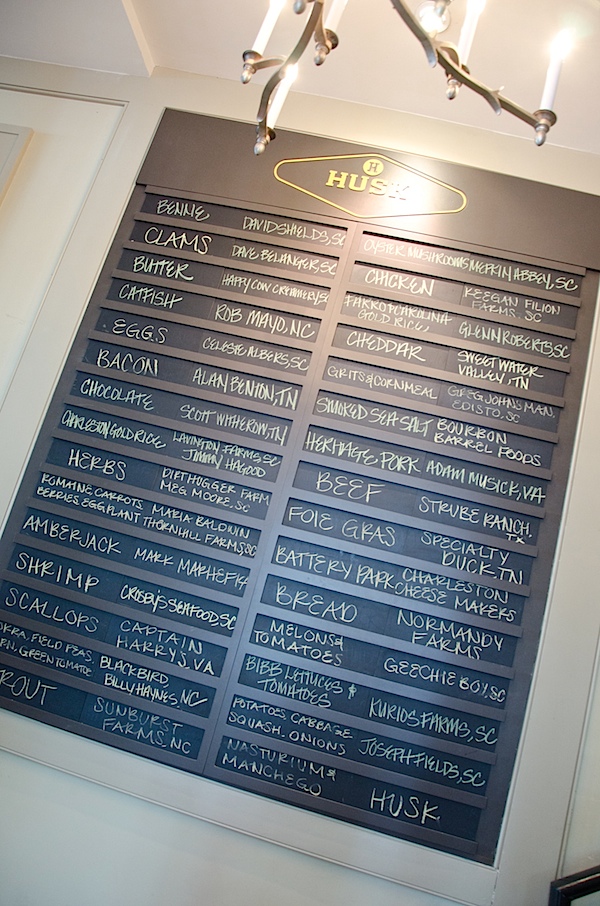 {The ingredient board that greets you when you enter the house}

I think if I could design and develop the perfect restaurant, it would be something very close to Husk. They feature ingredient-driven food and have the strongest local-ingredient policy I’ve ever heard of, using only local purveyors from the South when they can’t grow it (yup, they have a garden) or make it themselves.

From the web site:

Brock and Grimes exhaustively research Southern food—its history and provenance—and in the process reconstitute flavors and ingredients lost to time. They grow much of their own produce on the restaurant’s garden, and concentrate on heirloom grains and vegetables that once flourished in the region, but were lost to 20th-century industrial agriculture. Then they take what is fresh and available today, or even this hour, and transform it into an evolving menu. Seasonal bounty comes in waves, however, and what they can’t use immediately is preserved, pickled, smoked, and saved.

And did I mention they change up the menu daily? I love that. If I ever had my own restaurant (a pipe dream from childhood), I would do the same thing. 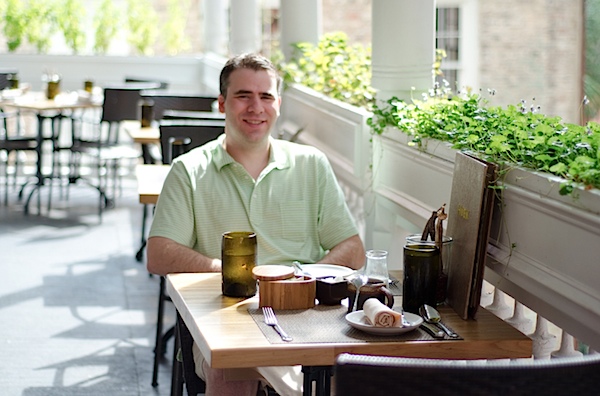 We enjoyed a seat on the large, upstairs porch. It was supposed to rain that morning, but the weather was actually really nice. Besides not raining, the temps were pretty cool and the humidity was relatively low. It felt great out! 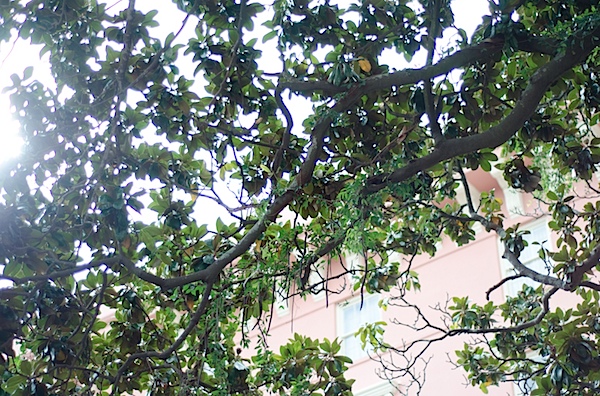 It was cloudy, but we got a couple streaks of sunlight peeking through the clouds and magnolia tree above. 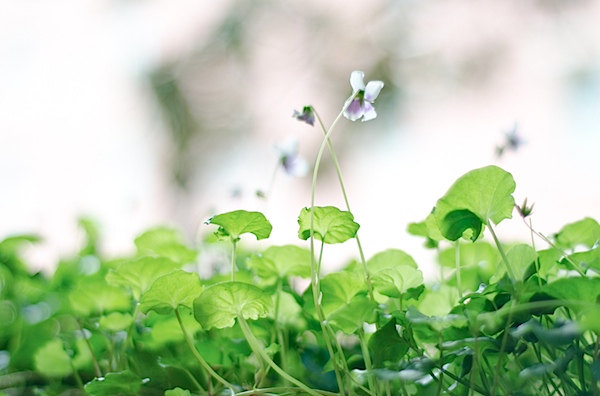 I enjoyed the greenery all around on the patio. These cute little leaves and flowers were in window boxes next to our table. 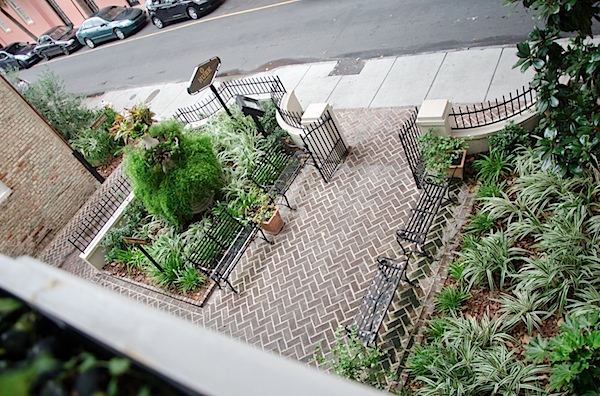 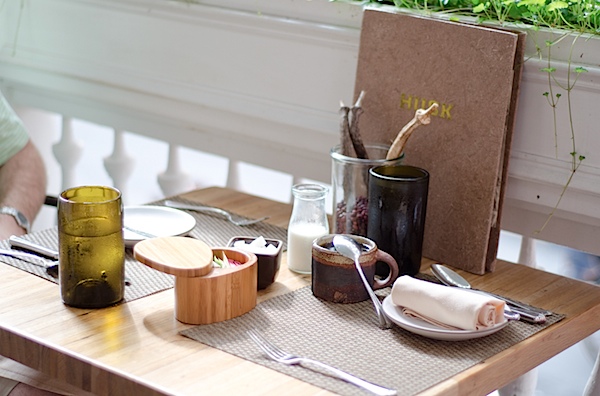 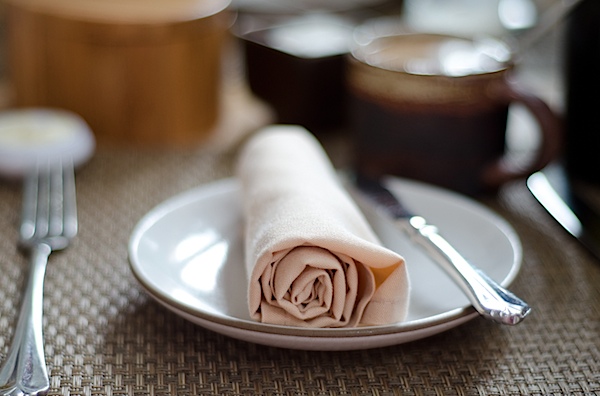 I thought the modern-rustic place settings set a nice tone. 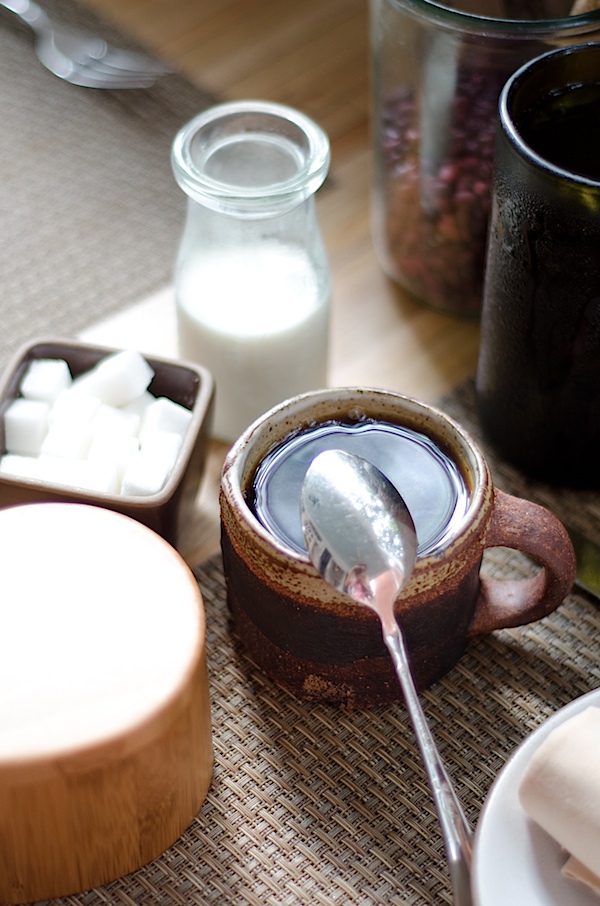 I especially liked the coffee mug. This photo is possibly my favorite of the group. 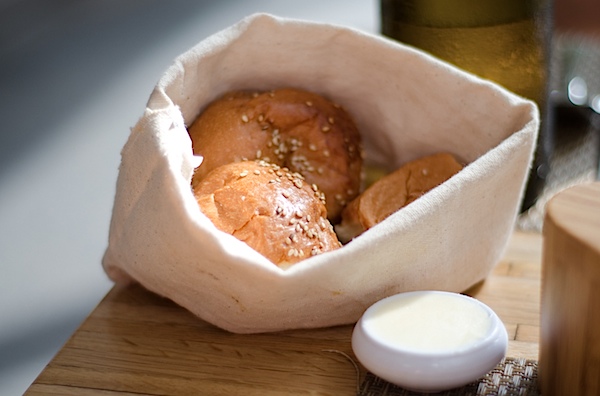 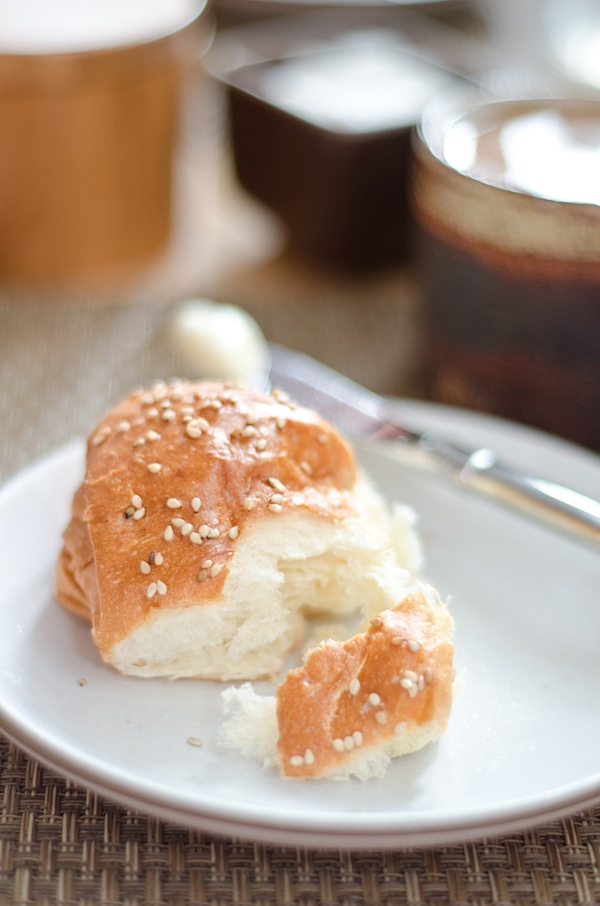 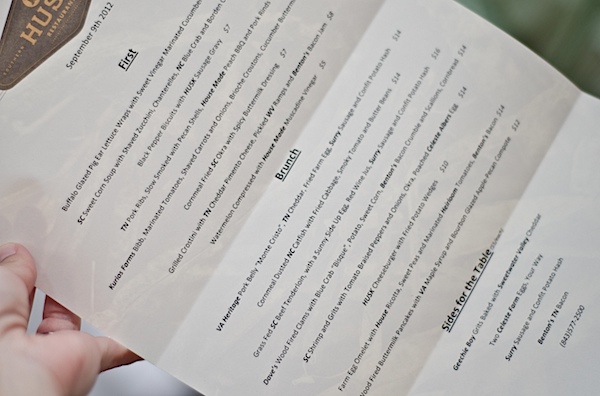 {The brunch menu of the day} 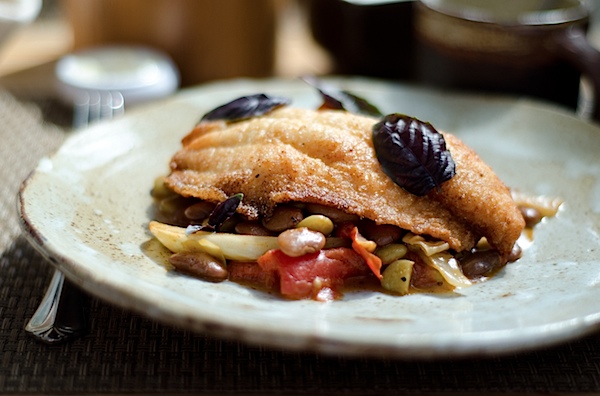 Even though it was well before lunch time, my gut reaction was to order the catfish in lieu of a more breakfast-like dish. From the menu – “Cornmeal Dusted NC Catfish with Fried Cabbage, Smoky Tomato and Butter Beans.” 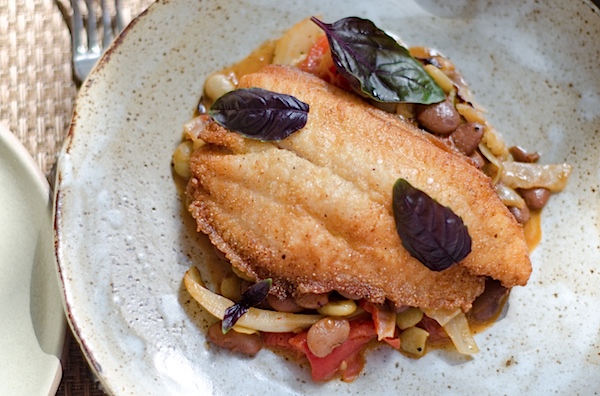 Though I’m not a big seafood person, I thought this sounded really interesting, and I figured if you’re going to get seafood anywhere, why not get it when you know where it came from? 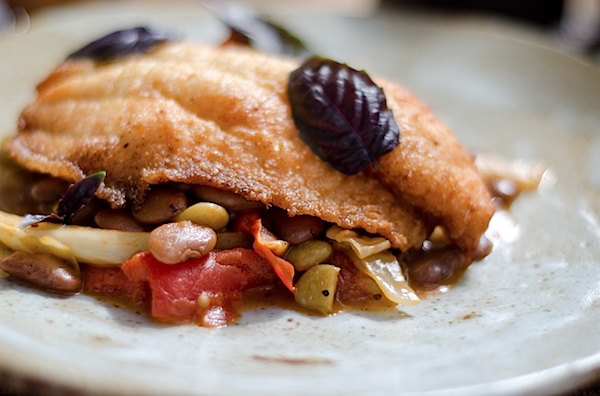 The fish was fantastic – lightly coated and perfectly cooked. The thing I loved most about the dish was how everything on it went together so perfectly. I tend to like to eat the components of my meals separately, but this one almost seemed like it was meant to be eaten with a little piece of each component in one bite. The flavors were so simple and yet so magical. I know that sounds dramatic, but it was like eating something you’d never tasted before and experiencing the flavors for the first time. I think you get that from fresh ingredients, carefully thought-out dishes, and talented chefs. 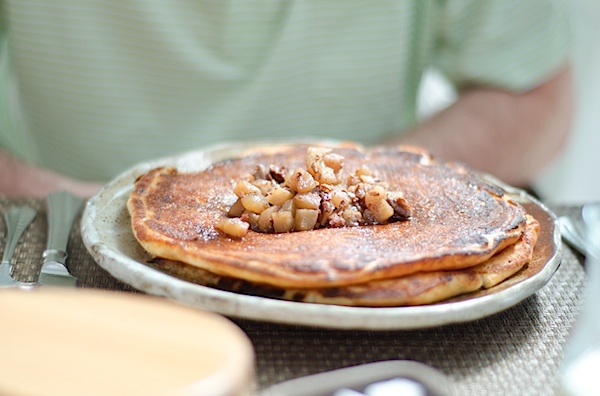 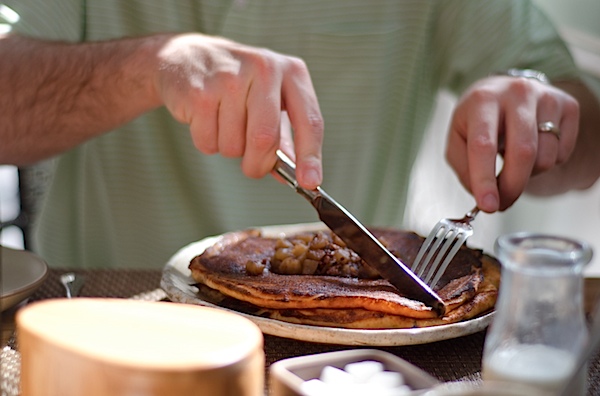 Since we usually share food, we debated on whether or not to order something as simple as pancakes. But, I had just seen the episode of “The Best Thing I’ve Ever Ate – Cakes” and Alton Brown selected pancakes for his best cake. I figured if Alton Brown could make pancakes his favorite cake, then there was a chance that something as simple as pancakes could turn out to be extraordinary. 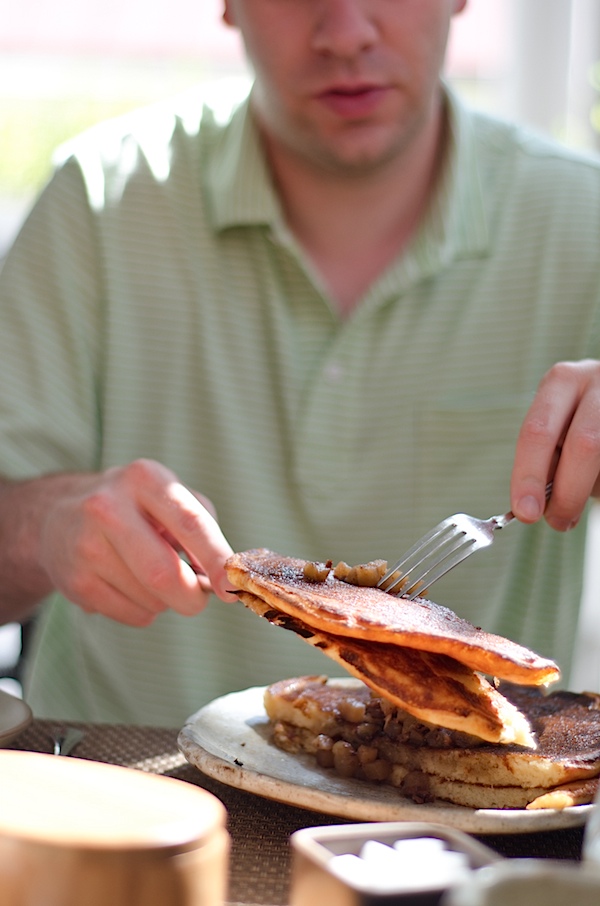 It was a good choice. 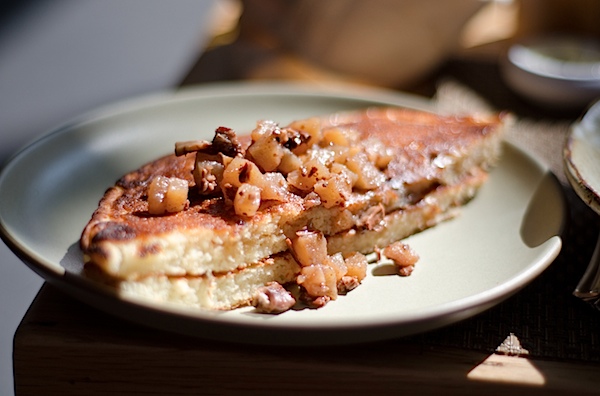 I know you’re sick of me saying stuff like this, but these were truly the best pancakes I’ve ever had. 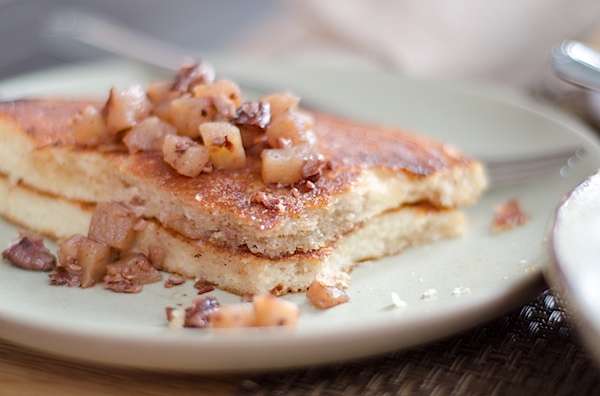 They had a really unique texture from being cooked in the wood-burning oven. I think they used a wood-burning pizza oven perhaps? The pancakes were fluffy on the inside but had a slightly crisp bite on the outside from the cooking method. Instead of being served with a side of maple syrup, they were served already doused in some VA maple syrup with a topping of apple pecan compote. The syrup was just the right amount, and it went splendidly with the compote and the pancakes, themselves. Even though there were a lot of sweet components on the plate, I never really felt overwhelmed by the sugar, which was nice. I liked how the apples were chopped so small and how the pecans gave some great texture to the dish. It’s only too bad that I don’t have a wood-burning pizza oven at the house so I can try to re-create this one. Though, perhaps I could get creative with the oven and a pizza stone? 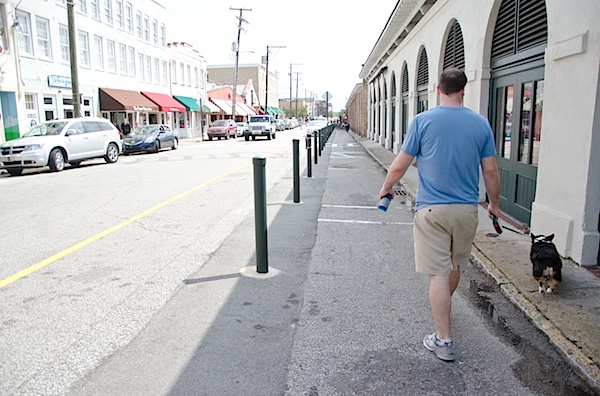 After brunch, we took a quick trip to the market with Bailey to pick up some sweets to bring back home. Then, it was time to hit the road to head home.

We did another Starbucks stop on the way back in Columbia, SC. I must say, Starbucks is turning into my favorite road trip pit stop. I had drafted a post in the car earlier and managed to publish it while I was waiting for my drink (iced green tea). Where else will I find pretty clean restrooms, delicious refreshments, and free wi-fi on the road?

I’m sure if you’re still reading that you’re probably sick of all these Charleston posts, but I do have one more left. I don’t think I’m going to post it right away because I want to make a video to go with it (and that may take eternity). It’s going to be a post about the hotel where we stayed. Other than that, I have some food and fashion posts that will be coming your way soon! Stay tuned!

And thank you for reading!

Reader question #1: In what city have you enjoyed your best eats? I’d have to say I’d have a tie between Charleston, SC and San Francisco, CA!

Reader question #2: Have you been to Husk? How did you like it and what did you order?

Reader question #3 (because why not have 3?): Is it important to you that the restaurant you visit use local ingredients?