Any 80’s fans out there? Last month, I hosted one of my favorite theme classes to date. I wanted to post that I recently hosted an 80s-themed Zumba class. But, seeing as how most classic 80s songs are pop, and Zumba classes should be at least 70% Latin, that wouldn’t be accurate. We only had one Latin song on the playlist, and that was a samba remix of Take On Me. So yes, I co-hosted an 80s themed night of dance fitness with my friend Ashley – two back-to-back classes. And we had SO much fun at our Totally 80s Dance Fitness Party! 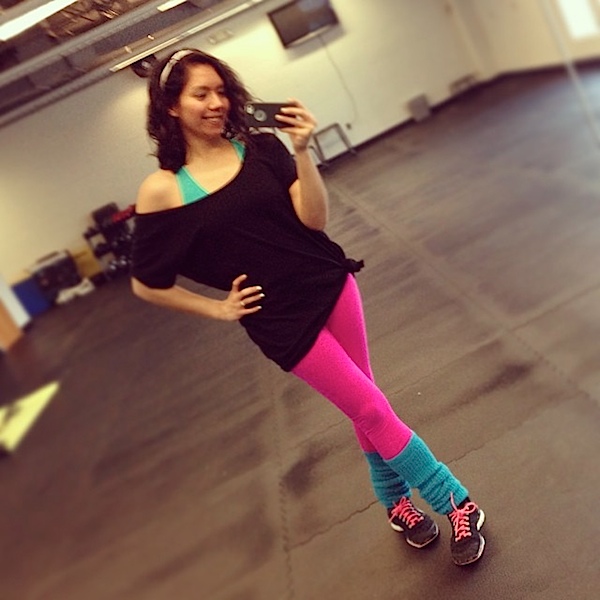 I started class with the above outfit. I wanted to go with a Madonna lacy skirt look, but I couldn’t find the ruffle skirt I wanted to wear, so I opted for leggings and leg warmers and an off-the-shoulder shirt instead. My hair wasn’t exactly done in an 80s style, but I had reason behind it… 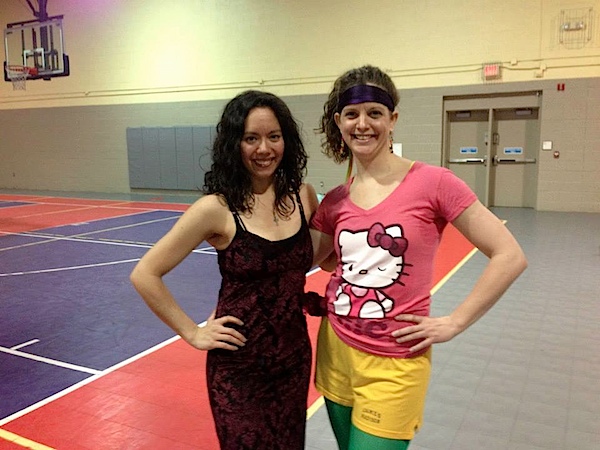 {Cool down outfit for the Totally 80s Dance Fitness Party – don’t worry, there are shorts under there!}

…I did a costume change! I realized late the night before class that a) I had a dress, necklace, and hair style that semi-resembled Madonna’s from her Like a Prayer video and b) I already had a cool down choreographed to the song. It was too perfect…and silly. But, I figured if I could make my class laugh a little, it was worth it. I was fortunate enough to have some guest instructors attend the class, so they were able to lead the song right before the cool down so I could run out quickly and change. 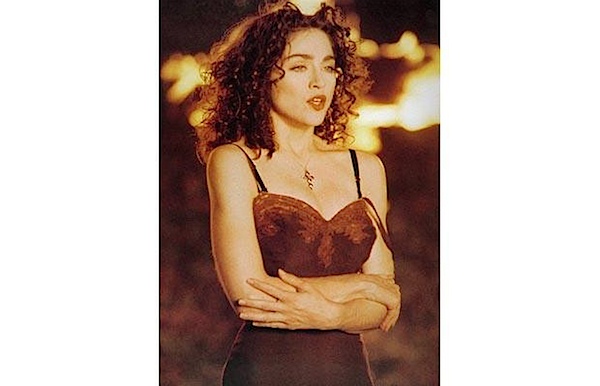 {Like a Prayer music video in case you want to watch} 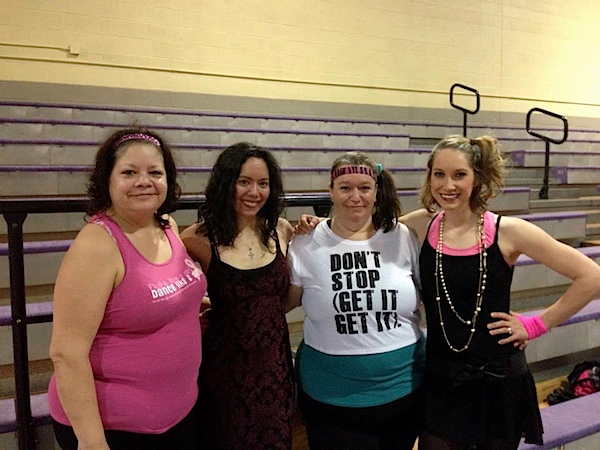 We didn’t have enough 80s songs to make a full playlist, so we used a couple 90s songs, too. And we had four new songs (see *) on the playlist with three that I choreographed. I wrapped up a couple just before class, so they were finished in the nick of time. Phew! I had a couple others that were almost done, but I guess I’ll have to save those for next time! Till then, I’ve been using Maniac and Let’s Go Crazy quite a bit in my other classes. Of the new songs, I think Maniac is especially fun. I took a lot of inspiration from the Maniac music video, so it’s like a dance fitness version of that. Wheeee!

Ashley did some fantastic new toning choreo to some of my favorite 80s songs in the second class (like I Think We’re Alone Now!), which made the tough workouts strangely and happily enjoyable. Gotta love that!

The Totally 80s Dance Fitness party was a blast! I had so much dancing with class and the guest instructors. The energy in the room was so high and lively. I definitely want to do another one of these one day!

Have you done a fun dance fitness theme class recently?