Tis the season for all things pumpkin. Since I love my Healthier Baked Pumpkin Doughnuts so much, I thought it would be fun to try it with a chocolate twist. I present a Healthier Chocolate Pumpkin Doughnuts Recipe with Chocolate Glaze. This recipe is also baked like the non-pumpkin version.

I actually drafted this recipe last year but never got around to blogging it. I had the photographs done and everything. I considered using the recipe and photos from last year. But, I decided to test out the recipe one more time just to be sure it would come out okay. It did! And since I had some cute mini pumpkins, I decided to re-shoot the donuts, too. Read on for the recipe… 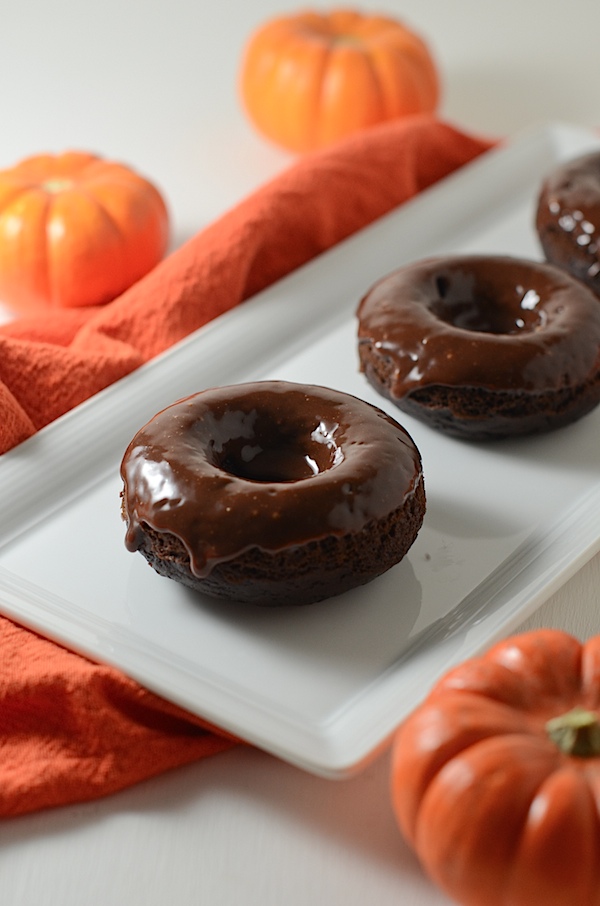 Normally, I like to roll my baked doughnuts in a cinnamon sugar mixture. Because I’m lazy like that. When you can have dessert in under 20 minutes, the extra few minutes it takes to make the glaze can add up. 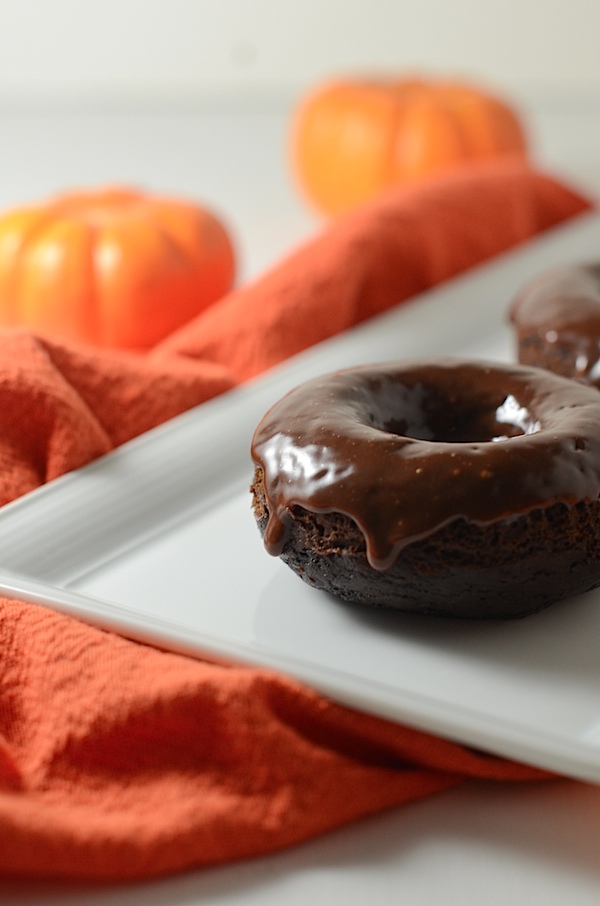 So, if you’re looking to shave off a couple minutes from this recipe, these Healthier (baked) Chocolate Pumpkin Doughnuts would also be delicious rolled in cinnamon sugar. If you’re looking for as much chocolate-y goodness as possible, then definitely set aside a couple extra minutes to whip up the chocolate glaze recipe. 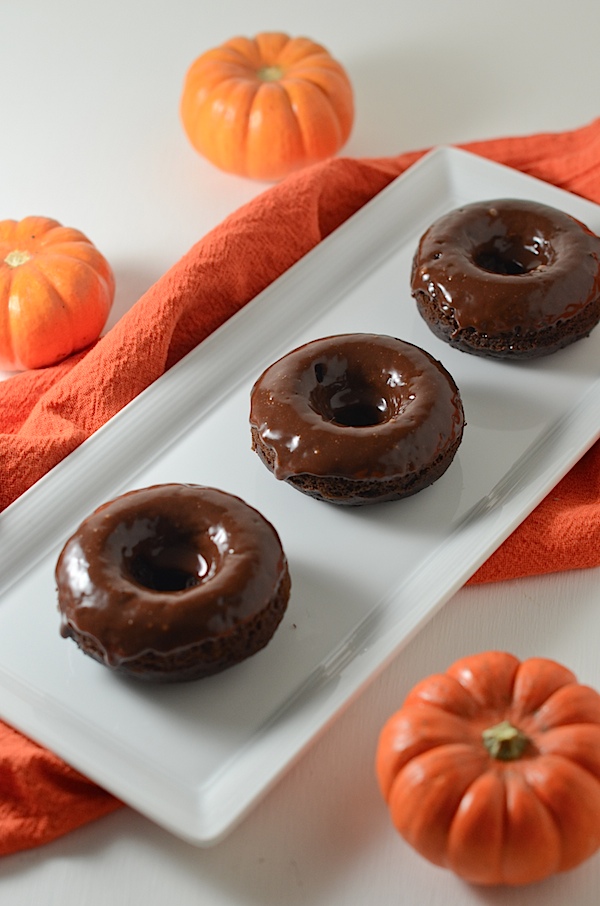 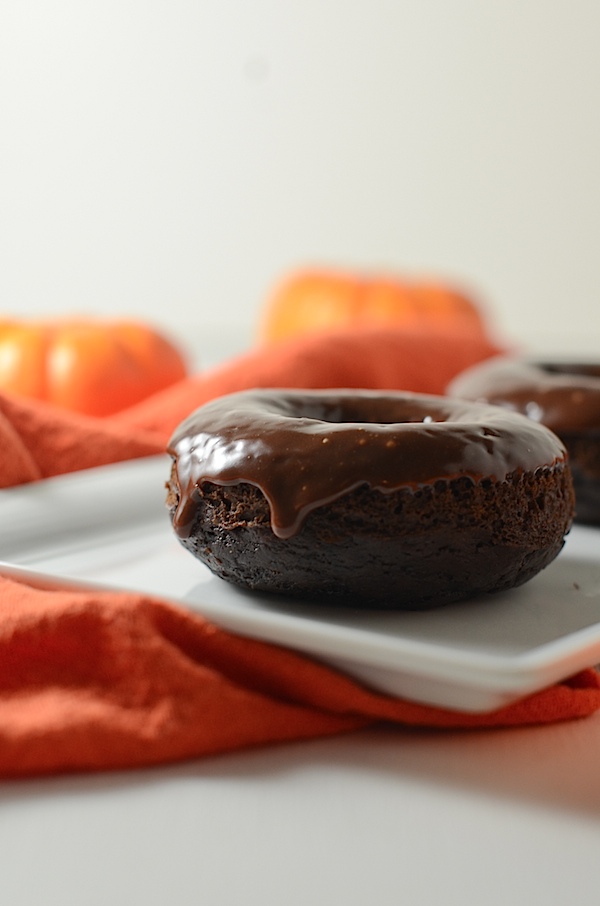 It was difficult to not eat all six of these Healthier Chocolate Pumpkin Doughnuts. But, I managed to share them with hubby and save one for the next day. It was pretty good cold, straight out of the fridge. But, I think they’re best when they’re eaten with that fresh-baked warmth still in them. Mmm! 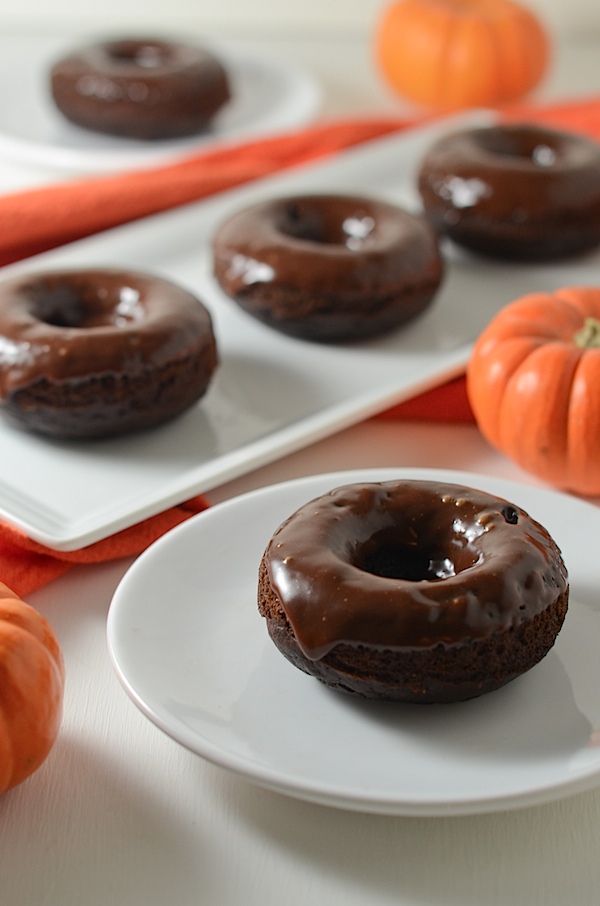 Here’s a quick & easy dessert that’s a perfect use of leftover canned pumpkin – Healthier Chocolate Pumpkin Doughnuts Recipe with Chocolate Glaze. I’m loving baked doughnuts because I can make them so quickly and they’re just so darned good. One batch never lasts long in our house. We gobble them right up and you can, too, with this recipe.
*Vegetarian, Vegan options*

Note: You can use cinnamon sugar instead of the chocolate glaze if you want to save some time or prefer the different flavor/topping. Stir 1/4 cup granulated sugar with 1/2 teaspoon ground cinnamon with a fork and dip warm doughnuts into the sugar mixture.

By the way, what is your favorite brand of canned pumpkin? Though I prefer using organic canned pumpkin, I must say Libby’s is probably the best. Libby’s canned pumpkin is not only a beautiful, vibrant orange color, it has a great texture and flavor, too!