I hosted a dumpling making team building party for my dance fitness assistant team this fall. You may remember I went to my friend Briana’s dumpling making party on Chinese New Year. She had the great idea to do one for our team. Yup, she’s a team member. 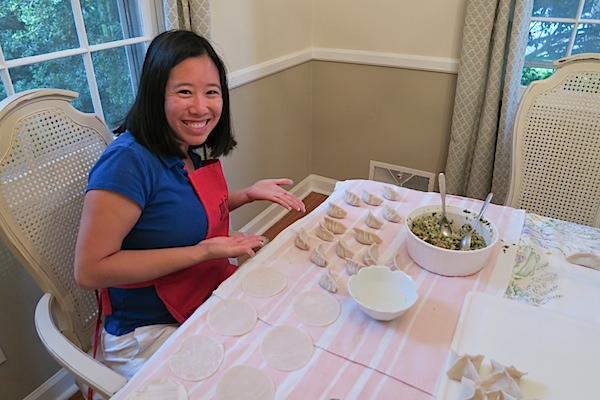 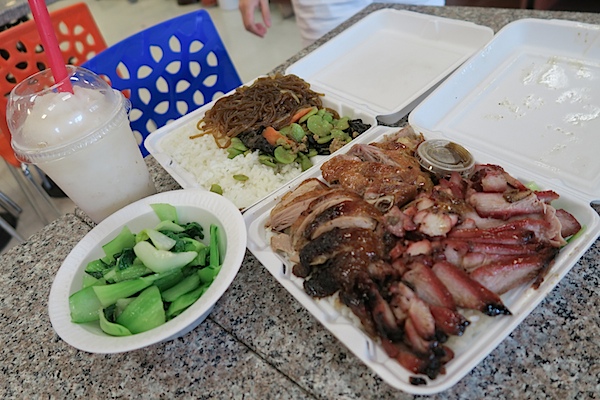 She also suggested we first take a trip to one of our local Asian markets to get lunch and groceries. Another great idea!

We got a large plate and shared that. We each got to pick one thing to share with the others. I think we had duck, pork, rice, fava beans, noodles, and bok choy. It was a really delicious and well-rounded mix. 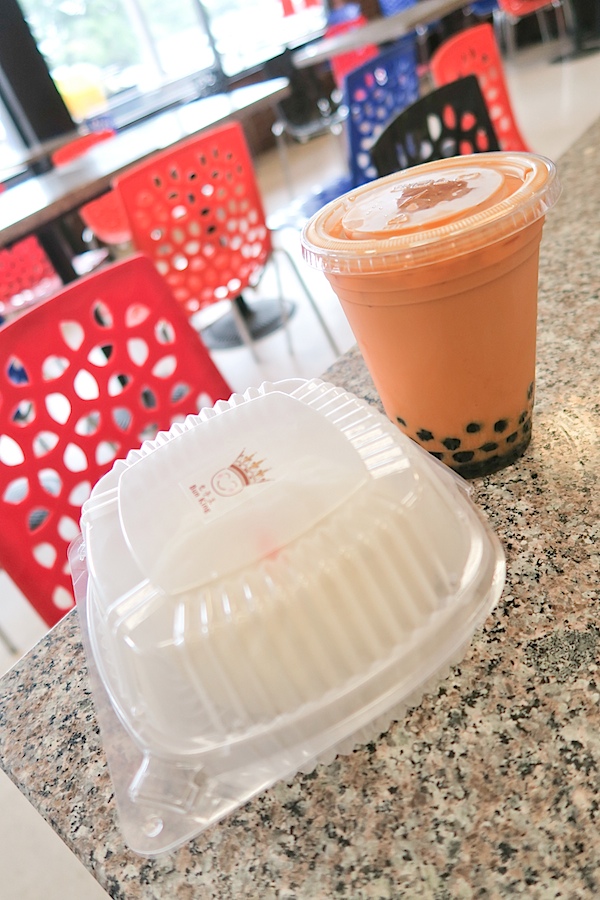 The Grand Asia Market also has really good bubble tea. I love their Thai tea bubble tea especially. But they have several flavors. 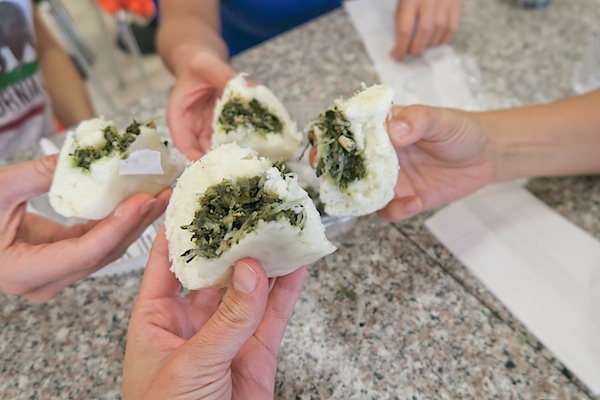 We also got a steamed bun to share. This thing was huge, so I’m glad we didn’t each get our own. 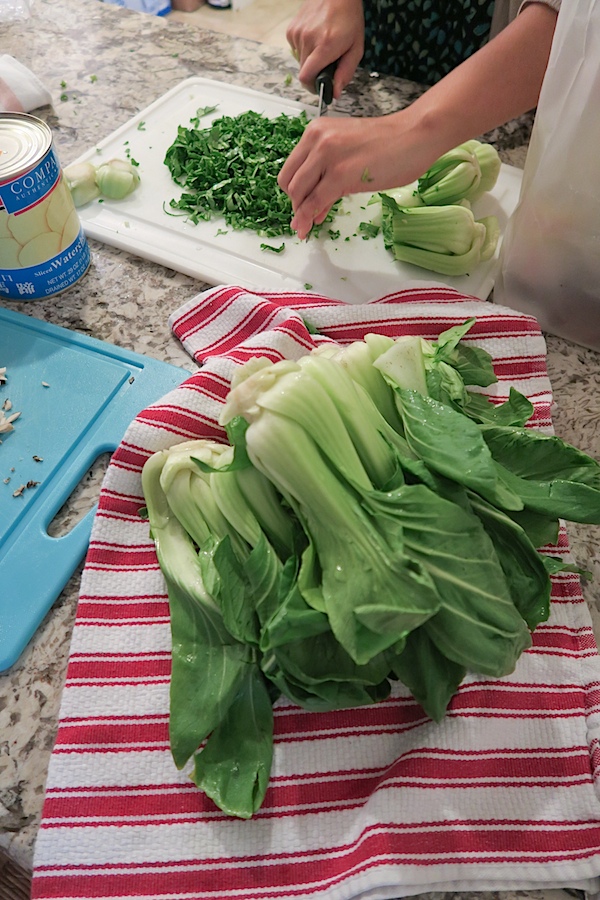 After picking up the needed groceries, we headed back to my house to get to prepping. We ended up with lots of bok choy, which was totally cool with me. We think we ended up with extra dumplings because of all the extra veg. 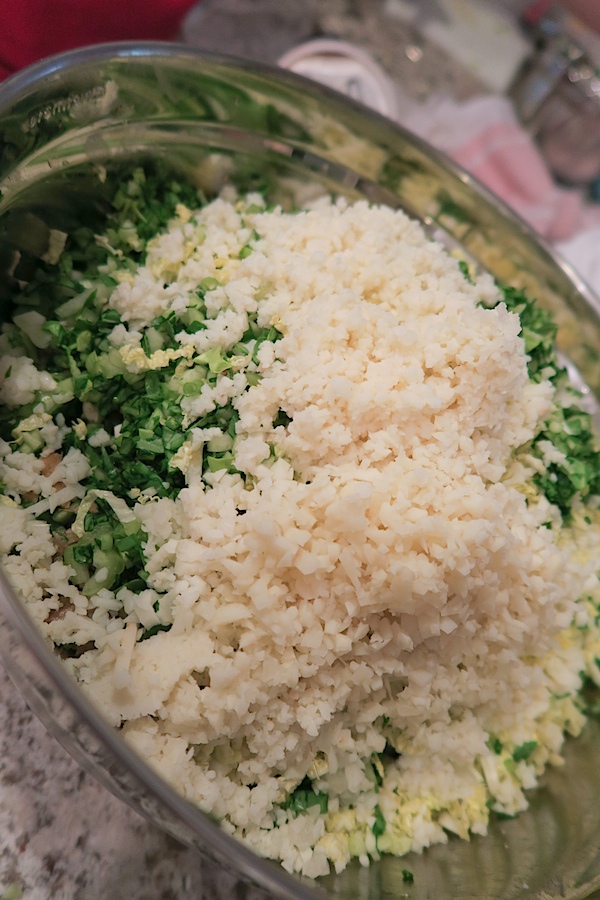 We used our team skills to divide and conquer. Some of us washed the produce. Some of us got to chopping. I think we prepped garlic, ginger, mushrooms, and bok choy.

Briana helped us mix together her family’s recipe for dumpling filling. Having enjoyed this a couple times before, I was already looking forward to the finished product. 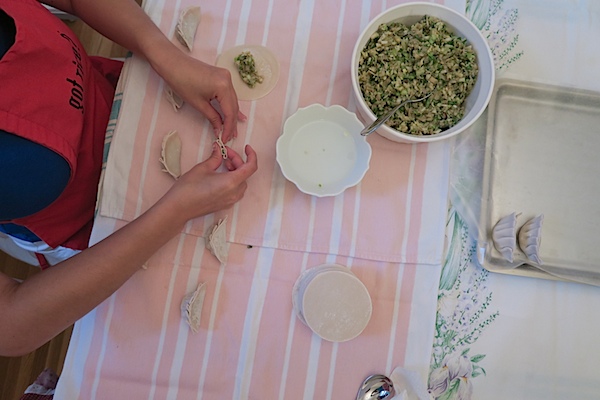 And then it was time for Briana to show us all how to fold the dumplings. 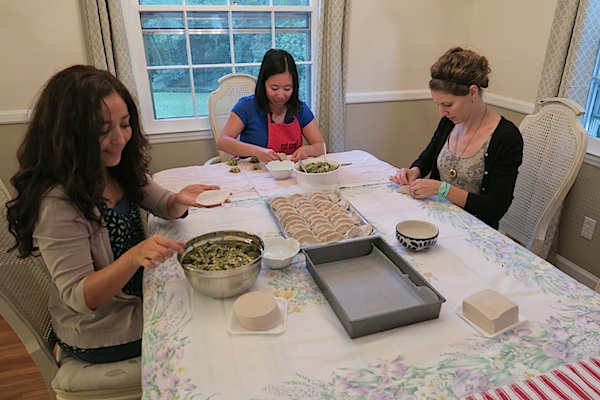 After her quick and helpful tutorial, we were off, folding our little hearts away. 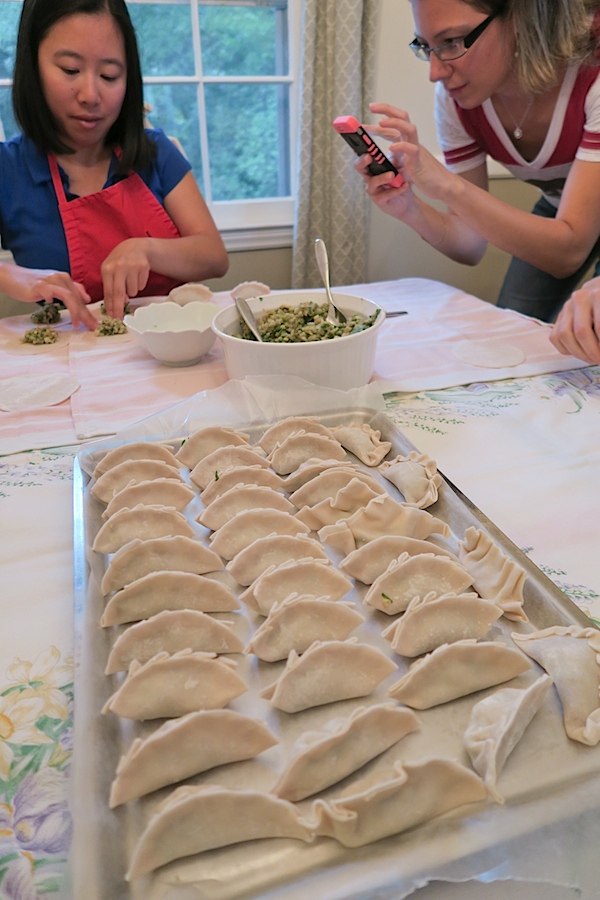 Many dumplings were folded the traditional way. Some were folded with a square bottom and pointy top. My one friend, Paola, folded some like empanadas, They were so cute! (See the lower right dumpling in the photo above) 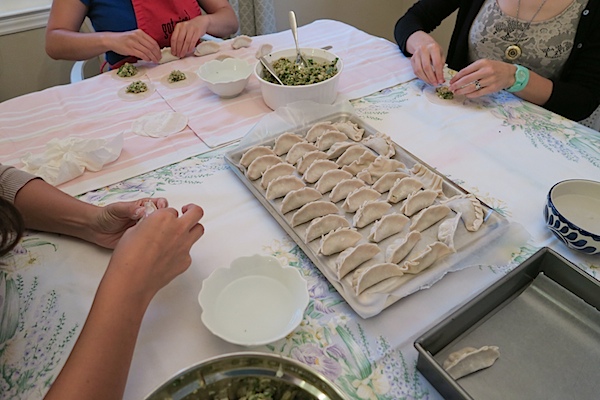 We filled many trays full of dumplings, which we put in the freezer. 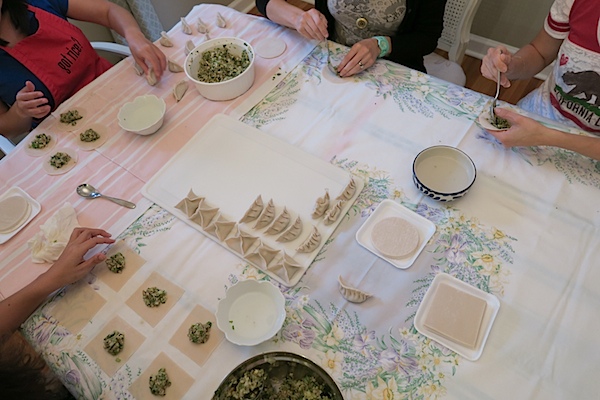 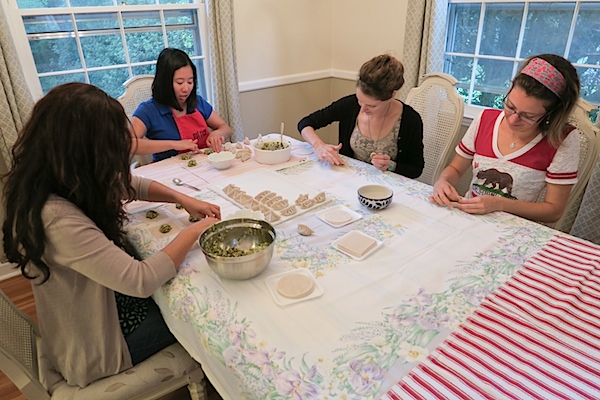 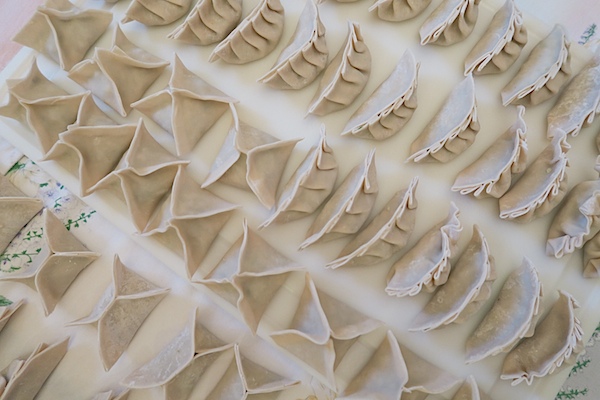 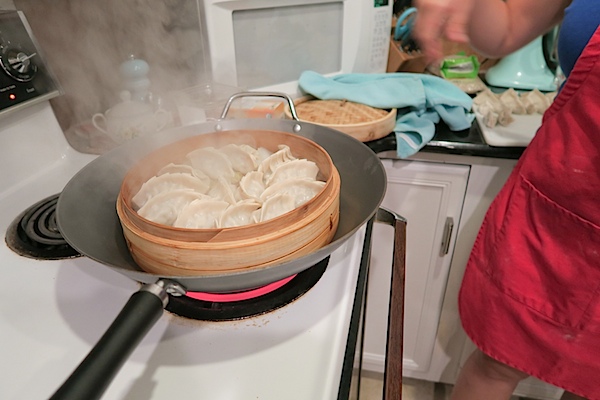 And while most of the dumplings were put in the freezer to save for later, we reserved a good number to cook fresh that day. You didn’t think we were just going to make all these dumplings and not eat them, right? 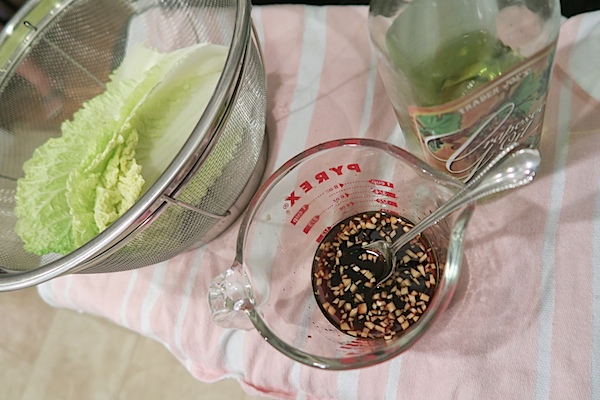 Briana whipped up a delicious dipping sauce for us. I believe it was made with soy sauce, rice vinegar, fresh garlic, fresh ginger, and green onions. 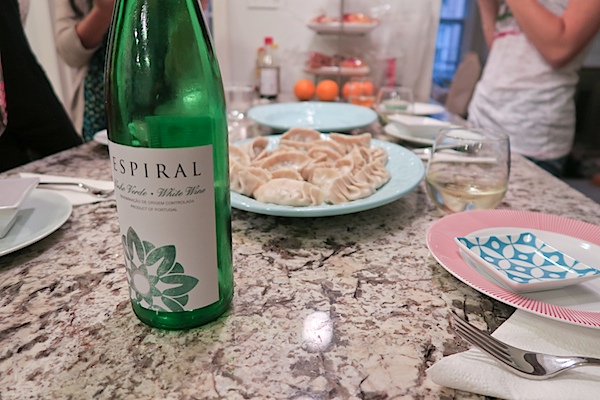 I set up little plates on the island. We each got a flat plate with a tiny sauce dish. 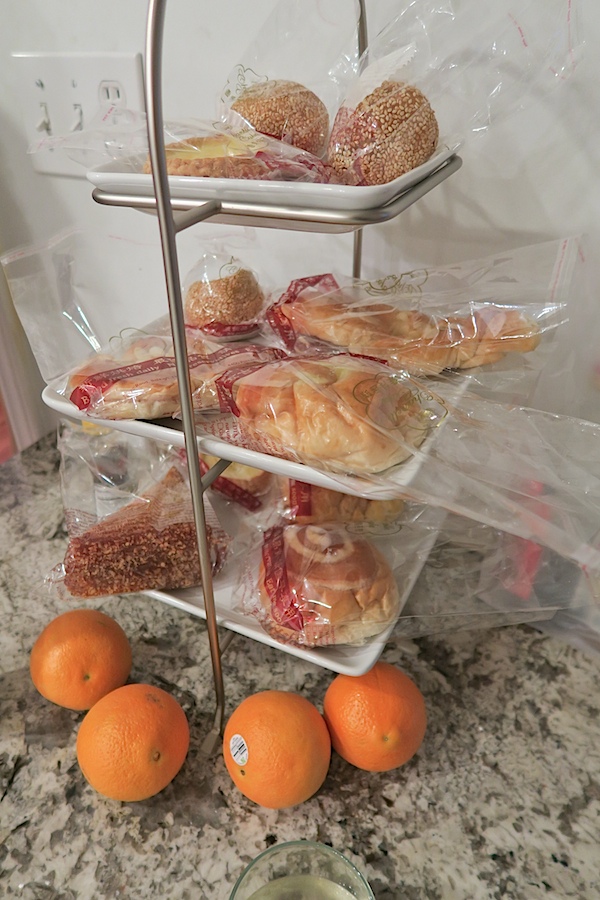 And we all got to pick out an assortment of baked goods from the asian market for dessert. 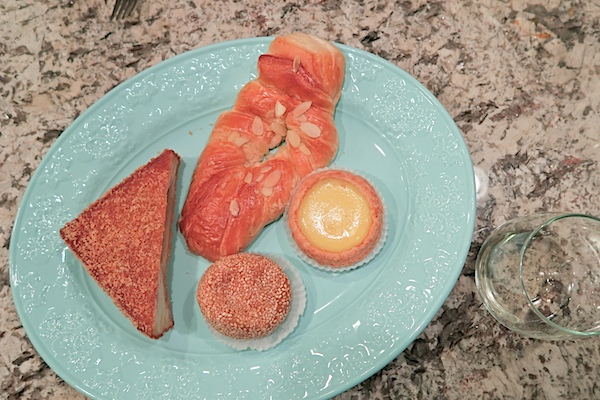 We cut most of them into small enough pieces so we could each try a bite.

We portioned off the frozen dumplings into plastic bags so everyone could take some home to cook later. I think I happily ate dumplings for almost a week. But, I’m running low now! Hmm…When’s the next dumpling making party?

Seriously though, this was a really fun and delicious way to do team building. I love my dance team. They do such a great job taking care of class, and I’m lucky to call them friends too.

Reader question: Have you ever done team building that you liked? What did you do?