The forecast: snow. And lots of it. Winter Storm Jonas was coming.

I went to bed on Friday, January 22, 2016 expecting a lazy weekend of being snowed in. This Southerner was prepared for snow but not interested in dealing with it very much. I figured I’d go out, if needed. My hope was for some nice R&R. But, something interesting happened Saturday morning.

I woke up, had breakfast, and started scrolling through Instagram. Jonas arrived overnight. I wondered how things were looking around the city, so I started checking NYC hashtags. And something caught my eye. The pictures from Central Park were stunning. As I looked at more photos, I realized I wanted to be taking the photos, not just looking at them. Oh, if only I was actually in New Yo…wait a second.

I realized the only thing stopping me from taking photos in Central Park was my concern of it being safe. But this was NYC. They’re used to dealing with snow, right? It may be best to not to go alone. Plus, it would be much more fun to do with someone. I figured it would be a long shot, but I texted my friend, Dana. “Do you want to go to Central Park to take pictures?” I waited for the cry-laughing emoji, but instead I received a yes! Game on! 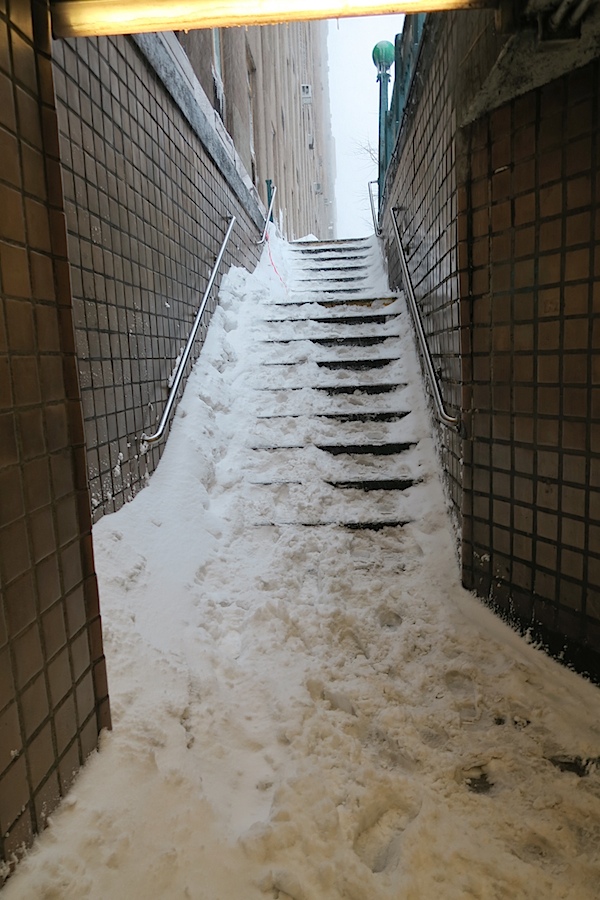 I put my snow boots, multiple layers of clothes, and my big winter coat on and met Dana on the subway platform. 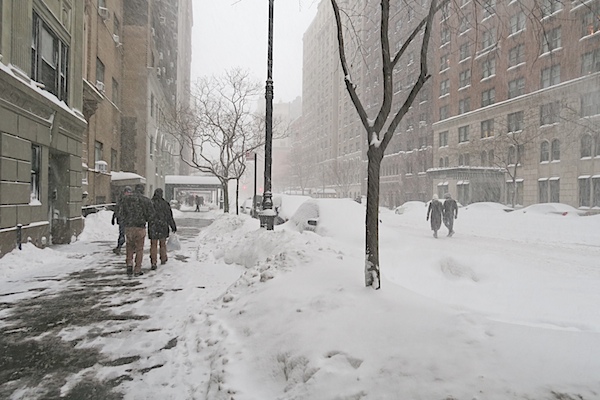 At this point, I figured the snow was a normal NYC thing. Just part of being further north. 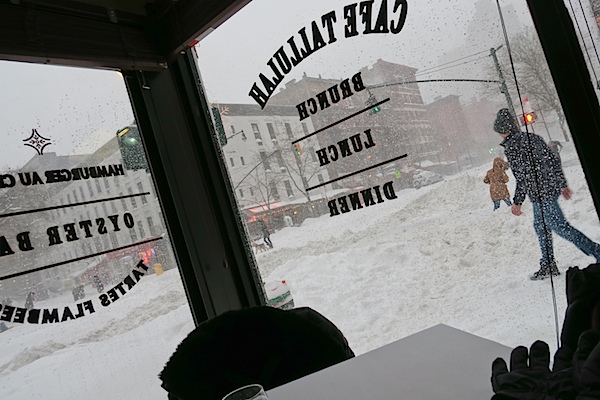 Most restaurants started the day saying they were open, but by the time we headed to the Upper West Side, many were closed. We found one open to get a couple drinks and some food. Cafe Tallulah had big, beautiful windows that made for interesting people watching. There were almost no cars in sight. Even the ones on the road were covered in thick blankets of snow. People walked down the middle of the road. Every once in awhile, a huge gust of wind would blow quickly down the street. It looked so strong, people in the restaurant were verbally reacting collectively. One big, “Whoaaaa!” every few minutes. 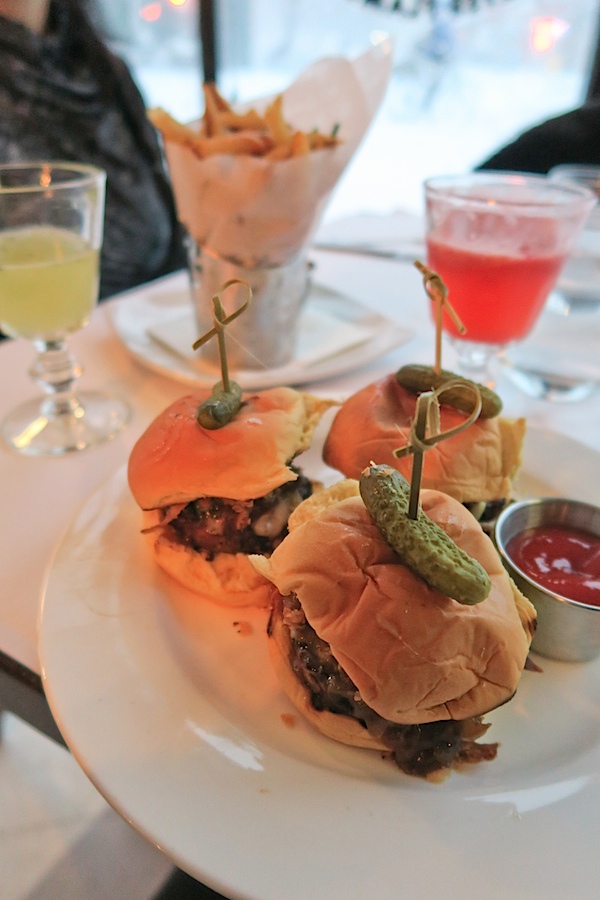 The menu was limited, but we got a couple cocktails, sliders, and some fries. As we were sitting in the restaurant, my dad texted:

Diana, Looks like you managed to be in New York during one of the five worst storms in its history. How are you doing? They say everything will be shut down soon including all the restaurants. Is that true? Love you. Dad

Ruh roh. So, this wasn’t a regular snowstorm. And here I was, getting lunch, and walking around taking pictures. Before this, we hadn’t realized how bad the storm had gotten. We did our best to wrap up lunch as quickly as possible. 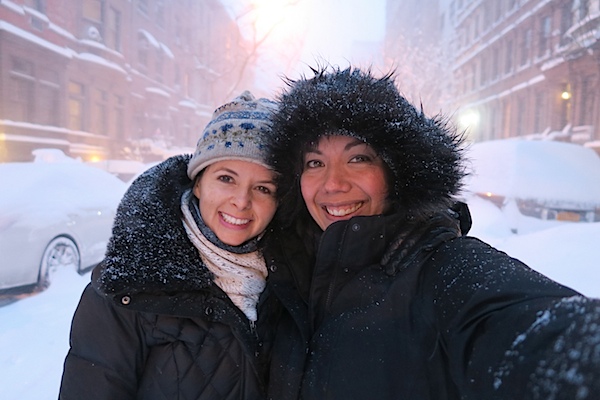 We decided to press on to Central Park. 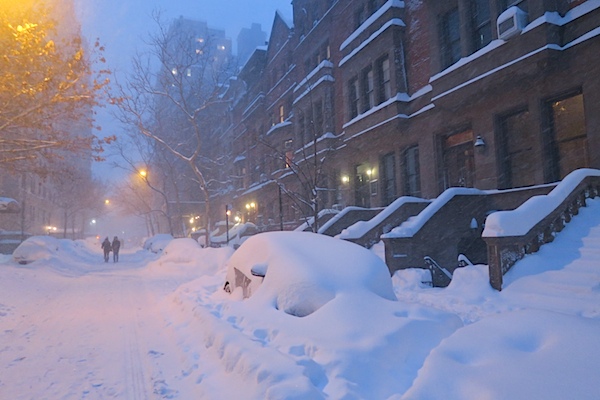 We were just a couple blocks away anyway.

The snow was blowing like crazy. You couldn’t really look straight ahead while you were walking. The flakes were actually a little sharp and hard. I was a little worried the snow flakes would blow into my camera lens and ruin it. But, this was now a once-in-a-lifetime opportunity to take photos of a historical event. It’s not every day you’re in Central Park during a storm like this. I tried to be as careful as possible with my picture taking. 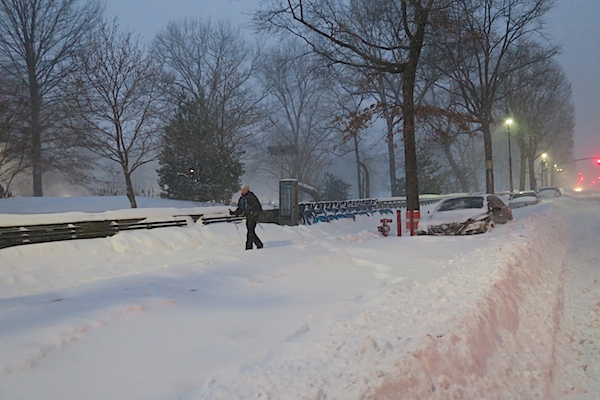 We saw a couple people skiing around the city, including this guy just outside of Central Park.

I almost lost my glove as we walked into the park. I had taken my hand out of it to snap this photo and somehow managed to drop it. Noooo! It was so cold, my hands felt like they were freezing every time they were exposed to the air. But, I had to take my right hand out each time I took a photo. Luckily, I retraced my steps and found it several feet behind. 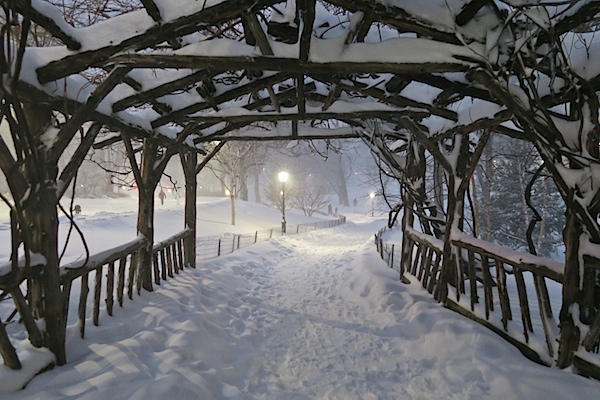 Central Park was everything I’d hoped for. It was a magical experience to be there when it was looking like something from a movie. 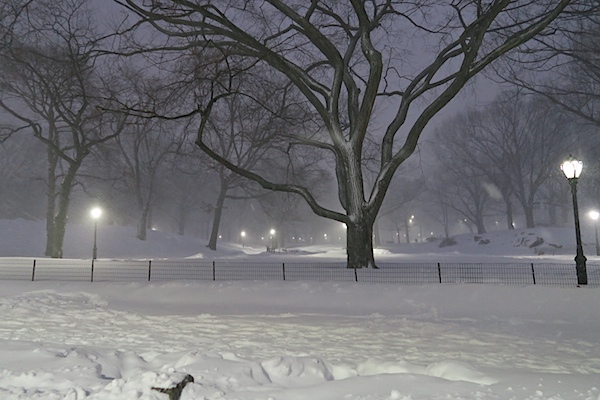 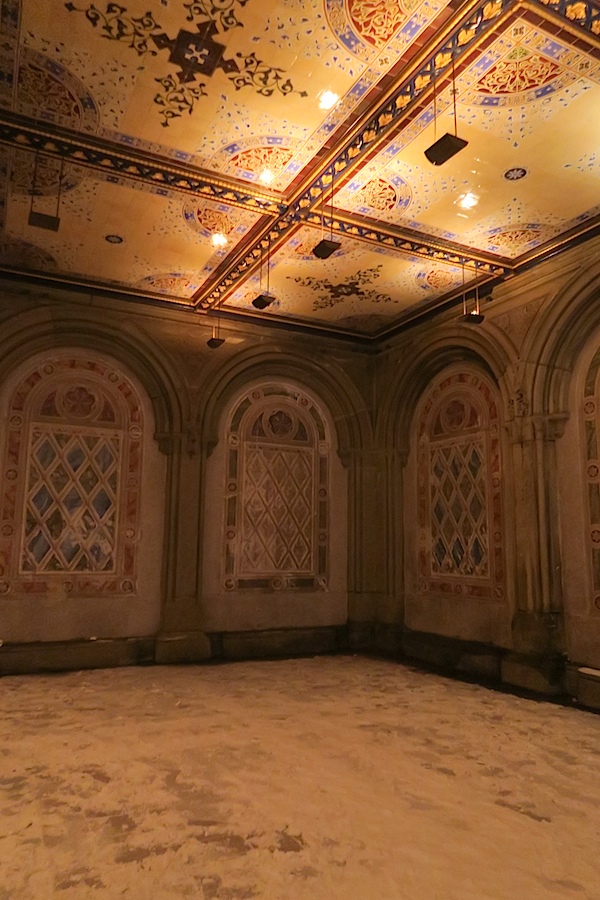 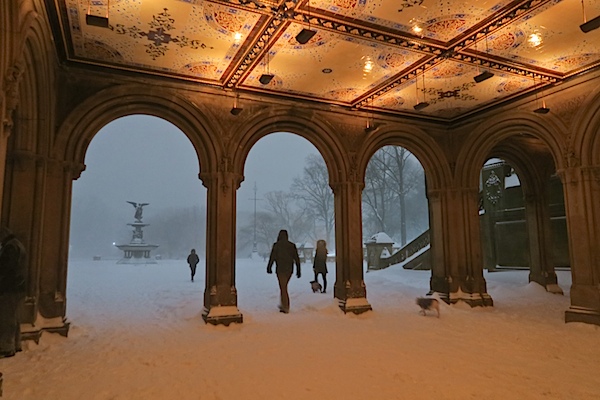 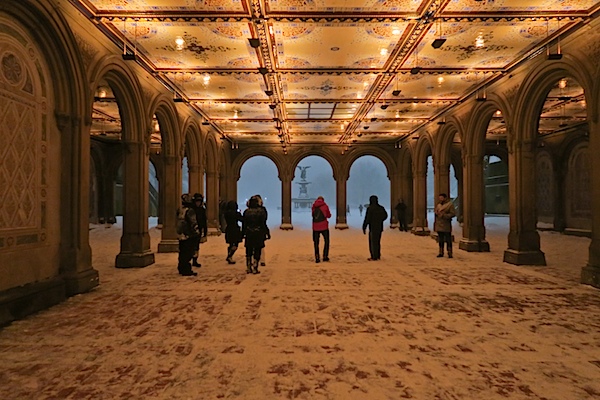 The park wasn’t exactly bustling, but there were quite a few people walking around. Some were sledding down the steps at Bethesda Terrace. I actually even saw some people exercising. That’s dedication. 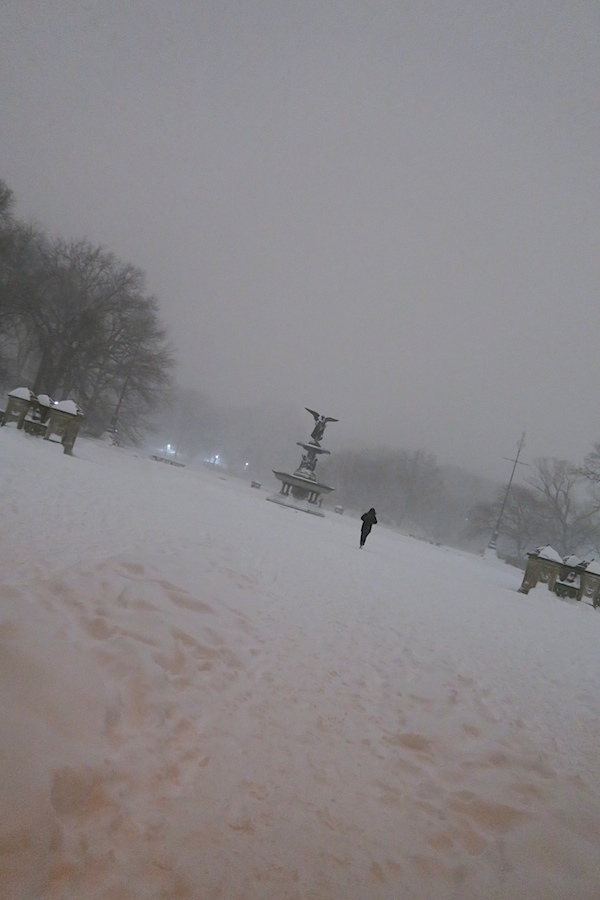 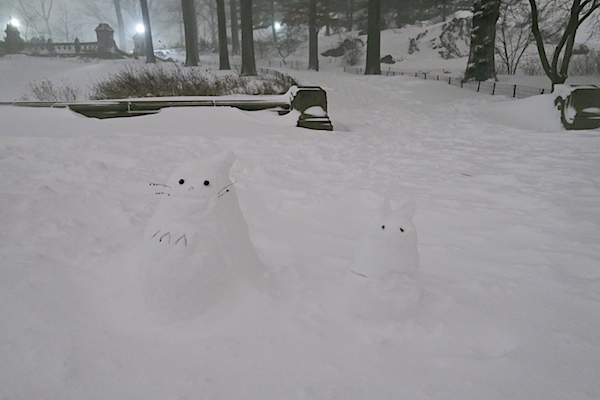 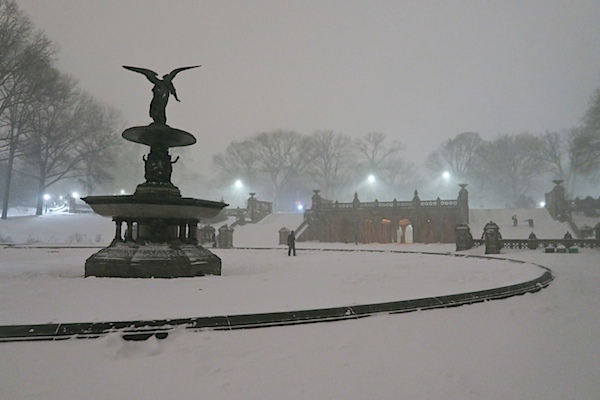 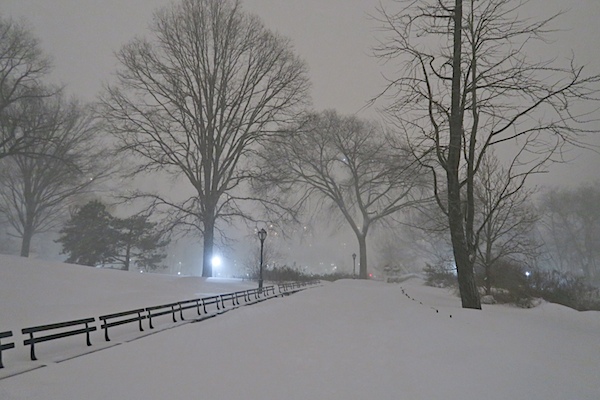 We actually weren’t in the park for long when we started to run into a little trouble. Both of our phones died. We think it was from the cold. We noticed some bright lights near Bethesda Terrace, so we followed them to the Loeb Boathouse. 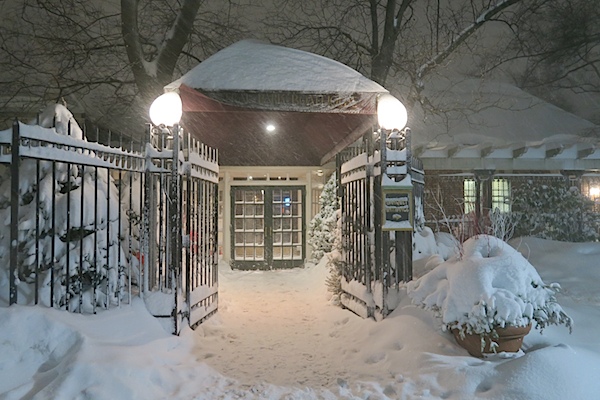 We were surprised to see the Loeb Boathouse was not only open, but the bar was full of people hanging out having cocktails. We found an outlet in the bathroom, and luckily I had my phone charger with me. After a quick zap, we got them both turned back on. We thought about staying at Loeb Boathouse to support them as a thank you for helping us with our phones. But, we knew at this point that most restaurants were trying to wrap up so their staff could safely get home. Don’t worry, Loeb Boathouse, we’ll be back!

We were really lucky we were able to get our phones back on because we needed them to get back out of the park and to a subway station. Not to mention, the subway lines were starting to shut down. Yikes! It was time to get back.

We actually almost got lost at one point leaving Central Park. As we were standing there trying to figure out the right direction, a woman approached us asking which way east was. We were pretty lost ourselves, but used our phones to determine the direction. She was headed the opposite direction from us. From there, we started towards the way out but it seemed wrong. So, we went back to the Loeb Boathouse and retraced our steps, exiting Central Park the way we came in. 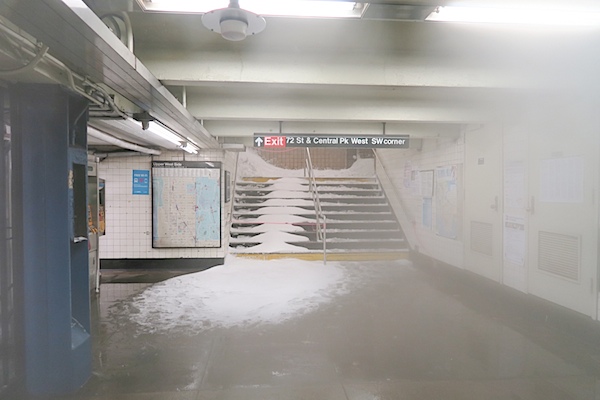 The subway ride was a little scary, just because all of the cars were so empty. 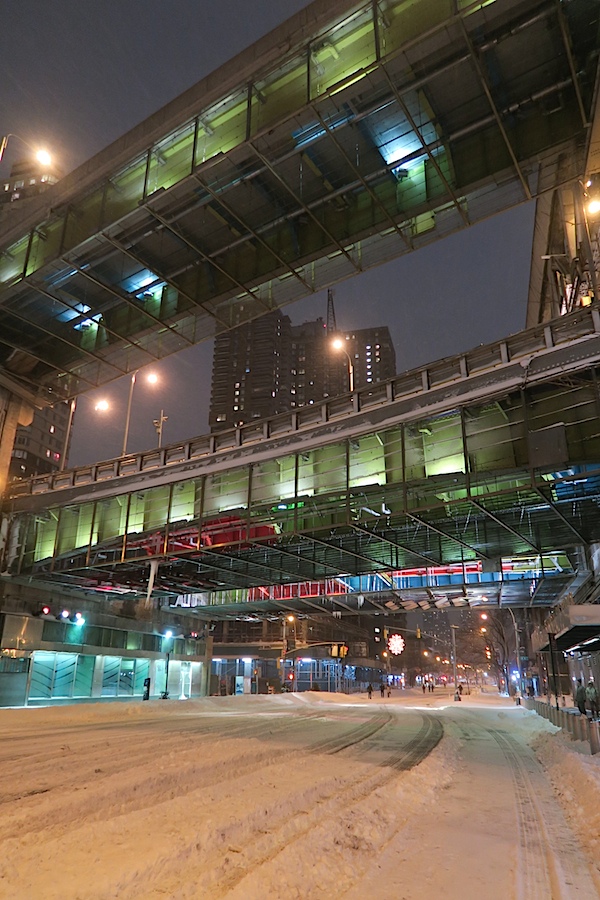 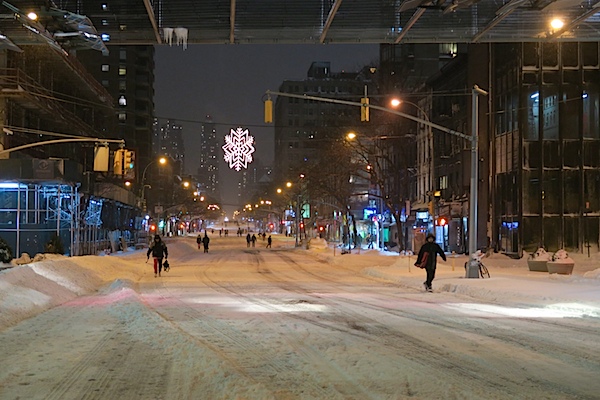 I snapped a couple more photos before calling it a day. It’s not every day you see people casually walking down the middle of the streets of NYC.

Wow, what an amazing adventure. I was so close to staying in that day. Instead, I had a really cool adventure with one of my best friends. It’s something I’ll surely look back on with fond memories. Plus, I get to share all of my NYC Blizzard Photos 2016 with you!

Sorry this is so late, but I really did still want to share them with you. Hope you enjoyed these NYC Blizzard Photos 2016.

Were you in NYC during Winter Storm Jonas? Did you stay in or go out?