Zumba with the Bobcats (and Conquering Stage Fright)

When I was invited to zumba with the Bobcats a couple months ago, I thought, hey, why not? Sounds like FUN! I love zumba, so why not zumba at a basketball game. No biggee, right?

Though such an event is probably not a biggee for most people, it was actually a sort of challenge for someone like me – someone with stage fright. That’s right! I HATE doing most things in front of people. There are definitely situations that terrify me and others that don’t bother me as much. For example, I can sometimes freak out over public speaking but I actually LOVE dancing in front of the zumba class with the instructor. I think maybe I’ve gotten better with this over time, allowing me to not worry so much in certain situations, but things were different when I was kid/teen.

When I was younger, I used to train as a figure skater. I LOVED to skate. I HATED to compete. In fact, I hated competing so much that I rarely did it. I remember dreading going to skating competitions as a kid. I could barely sleep the night before the competition and the day of, I could barely eat. I remember just before taking the ice how my legs would feel like rubber – like I couldn’t control them. It was not exactly a good feeling for someone trying to do complex moves in front of a rink full of people and judges. I didn’t really care about winning or the judges. I was too busy wondering if I would trip, forget my choreography (which I did one time), or otherwise embarrass myself. I was worried the people in the audience would think I was terrible. It was so NOT fun for me! 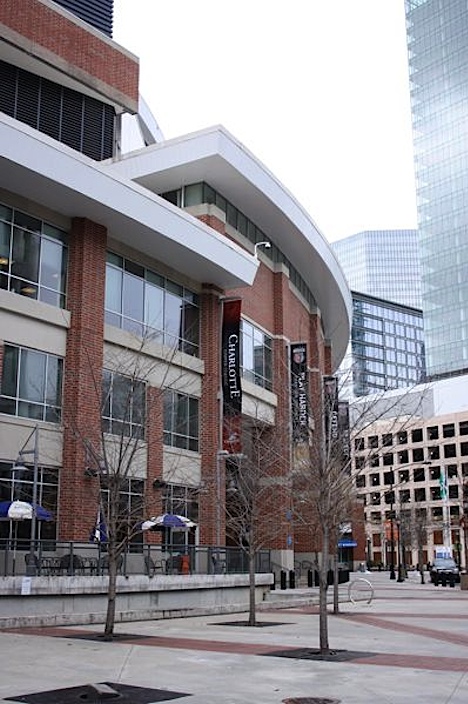 Anywho, flash forward to Saturday. I’ve met hours before the game with 230 fellow zumba lovers (most instructors) for a practice and dress rehearsal. 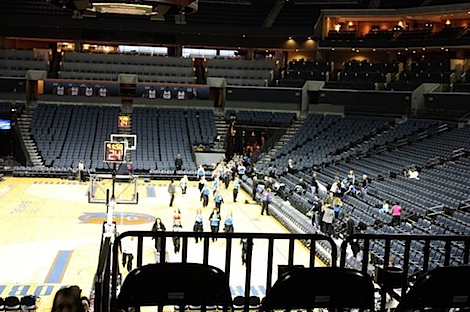 Suddenly I find myself standing in the center of an NBA team basketball court with seats EVERYWHERE! 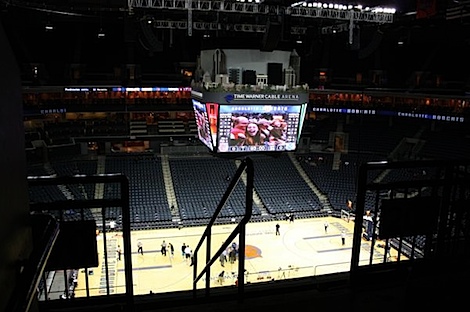 There are 20, maybe 30 times the number of seats as you’d see in a typical ice rink. In just a few hours, these seats would be filled with people all over!

Practice began with placement. They had the first two rows of people selected (because they know the choreography well) and they got those rows laid out and people in their places. Then, they told the rest of us to fill in and get in windowed-lines. If I didn’t make the second line, I had hoped to be sort of third of fourth row in the middle-right. Niiiiice and safe and well-blended-in. But, as I tried to make that way, there were people all over to my right and behind me. I couldn’t move. Somehow, I ended up in the middle. And when I say middle…do you know that line that goes straight down the middle of the court? I was standing on that line. I was in the third row, just behind my friend Sara who was one of the girls who planned and organized this whole sch-bang. She was front and center.

I stood thinking through the choreography while they worked on placing all the rows behind me. Several minutes passed. Next thing I know, the rows have been rearranged and they’re telling my row to step up one. *gulp* I am now in the second row in THE MIDDLE. How did I get here? Why am I here? Can I do this? As the stage fright demons started to creep out, I started to second guess my spot. I could move somewhere else, but where? I checked around, and it was looking pretty filled-out everywhere I looked. And yet, all the while as my mind was racing, in my gut I had the sense I was in the right place and that I should stay put.

Once we were all placed, we practiced the song two times and practiced our running on and off the court (230 people are a lot to funnel through one of those side court exits). We ended practice right after 4pm and had 3 hours to kill before the game, which started at 7pm. 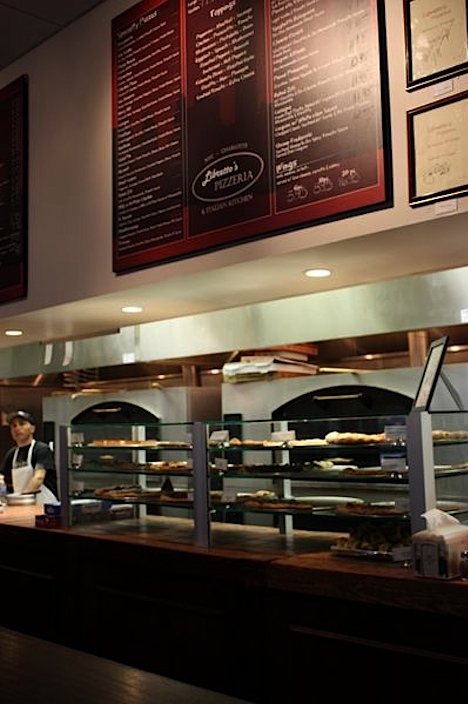 I headed out with my friends to get some food. They chose a nearby pizza place. I was glad to get away from the arena to let my nerves calm down. 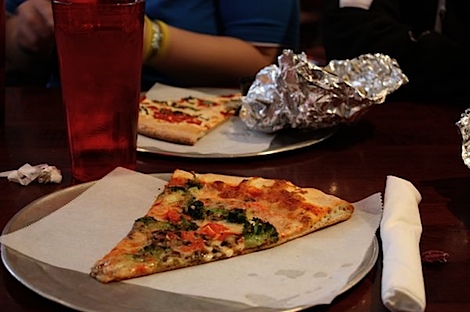 I wasn’t going to eat at first but decided to go ahead and get a piece of veggie pizza and water. 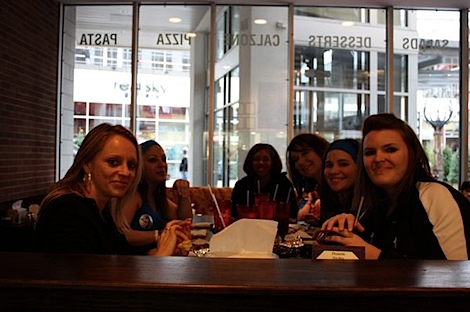 After eating, we all headed back to the arena. I split up with the girls and met up with hubby who was there to watch the game. As soon as we were back in the arena my nervousness slowly started to build. My mind started wandering again with worrisome thoughts. As I wondered whether I may mess up the choreography, I realized that if I did, it would be extra obvious because of where I was standing – one row back from front and center. Eek! I read over the choreography print out and had hubby quiz me a little. I practiced the choreo in the hall one time with my back to the people walking around who were probably like “what the heck is she doing?”

The stage fright demons were back. 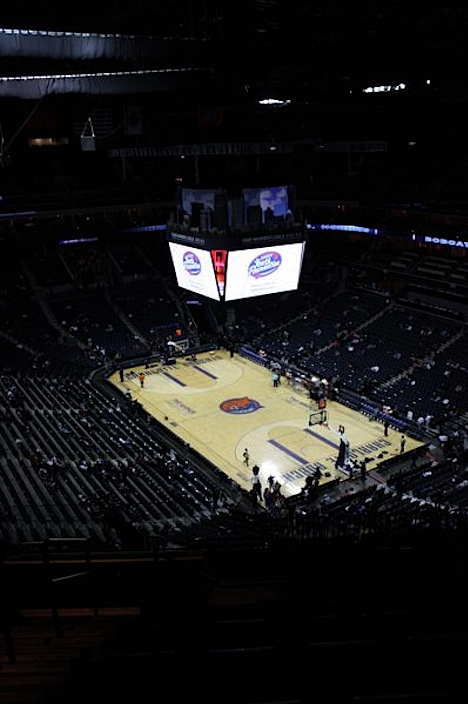 Hubby and I took our seats extra early. We were waaaaay high up. 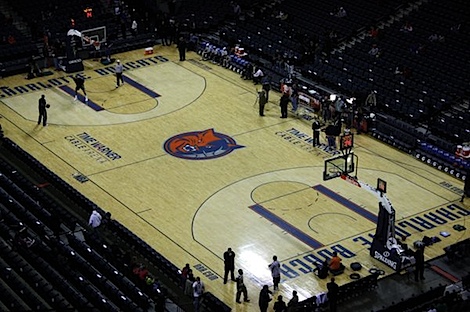 I took some practice shots of the court to see how close the camera could get. 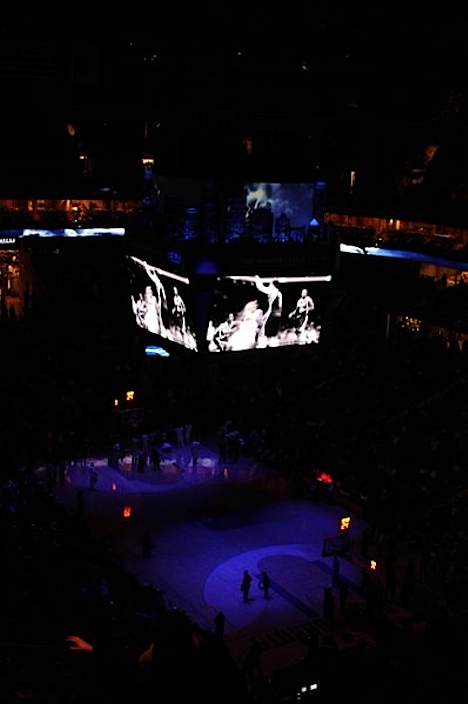 And then it was game time! 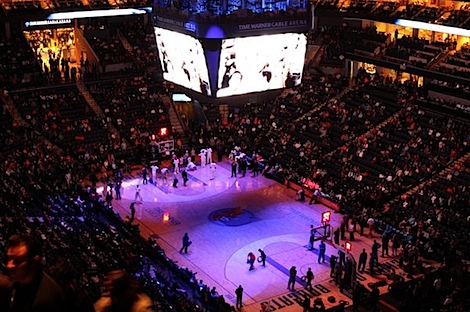 It’s amazing what a production an NBA basketball game is. I was starting to feel excited (albeit still nervous) about getting to be part of it. 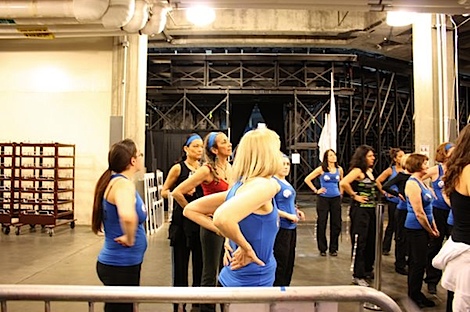 We had to head down to court level waaay before halftime. I only really saw the first 5 minutes of the game. We took a freight elevator to a holding area to wait before the halftime show. 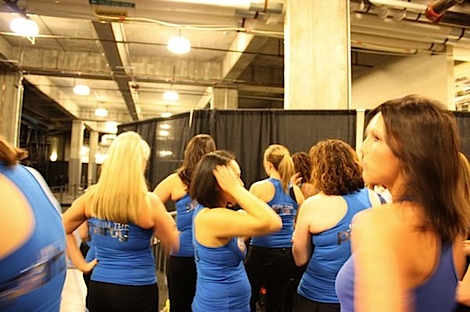 As I waited for halftime, I practiced the choreography a bit and talked with my zumba friends. I started to feel a peace with performing with my zumba group that I never felt when I was doing figure skating competitions. Though I was nervous, I was excited and happy to be there. The thought of trading my spot with someone last minute crossed my mind but only for a split second. I smashed that negative thought and realized that I WANTED to be second row front and center. I brought on some positive thoughts and reminded myself that I knew the choreography well and told myself that I would be fabulous.

I told those stage fright demons who was boss!

As we waited to go on, waves of cheers rose from our energetic group of zumba lovers. I felt lucky to be part of such an amazing group of people. Their excitement and confidence was like electricity in the air charging each of us with positive energy. 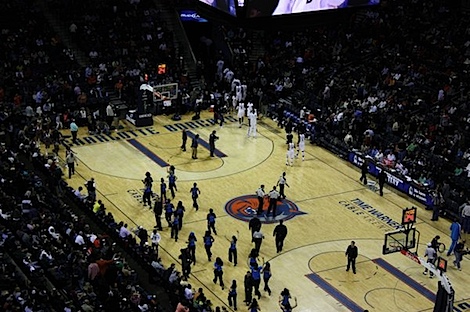 Soon enough, it was half time and we were running onto the court. This was IT! 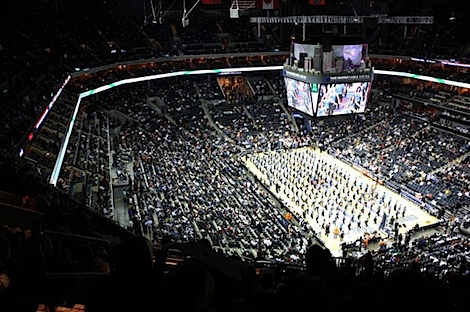 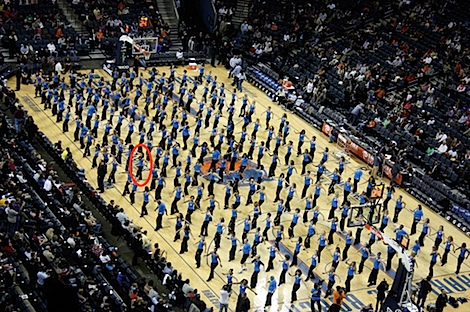 (That’s me circled in red) 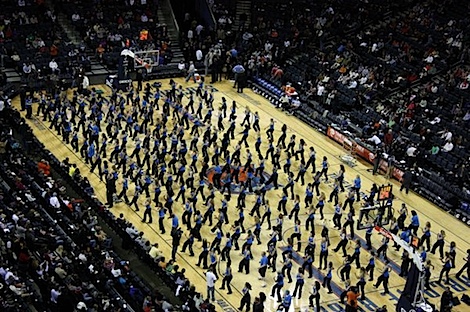 As soon as the music started, all my hard practice kicked in. I was so full of energy I wasn’t methodically thinking about the choreography. I was just feeling the music, the dancing, and the moment.

Gone was the stage fright – I was having FUN! 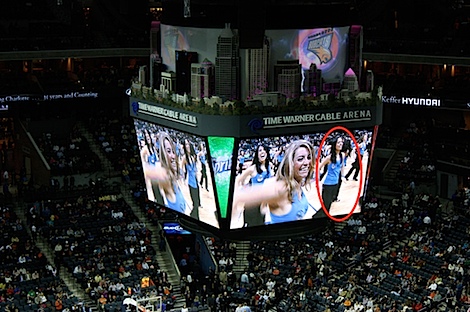 I even tried making eye contact with some different people in the audience. 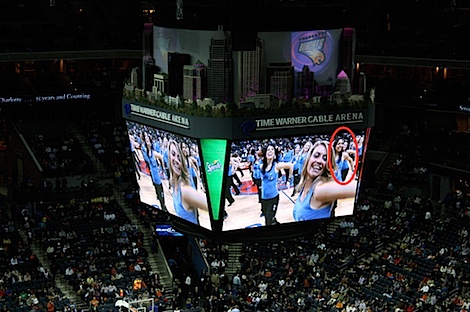 Hubby caught some photos of me on the main screen of the scoreboard. 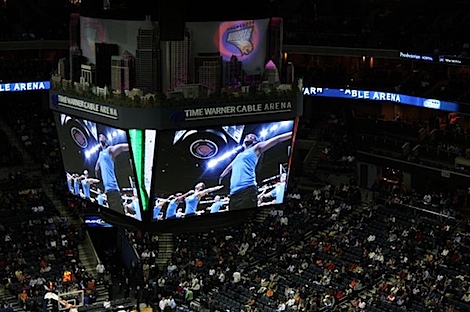 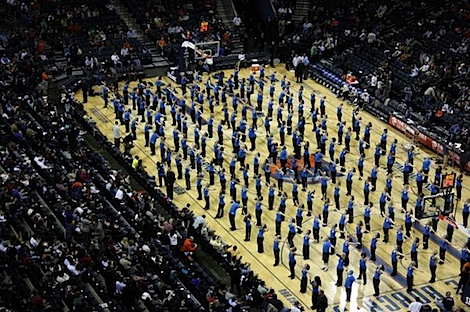 And seemingly in the blink of an eye it was over! Phew! I DID IT! 🙂

At the end, we all stopped with our arms extended and our face towards the ceiling. In that moment, looking up at the lights, I felt a high like never before. The bright show lights were on us, and the audience was cheering and clapping for US. No wonder rock stars love to do concerts. If this is what it feels like to perform without stage fright, then I can’t wait to do it again. 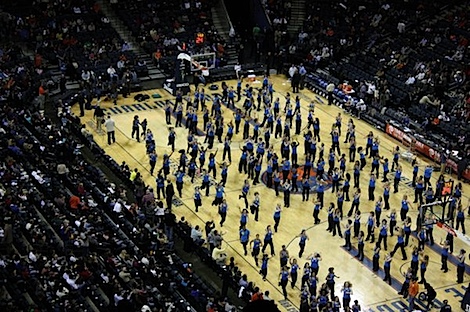 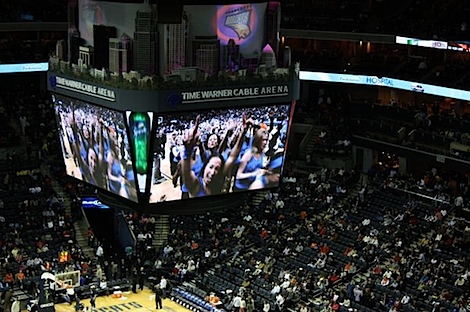 With the clapping and cheering still going, we all ran off the court and hugged each other and let what we had just pulled off sink in. Squuuuueeeeeeeee!!!!!!!

And then, a random performance of sorts. 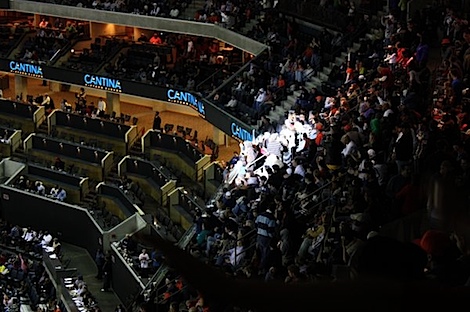 As we were making our way back to our seats, my head instructor and I were asked to dance with Miguel from Bobcats TV during a timeout in the last quarter. 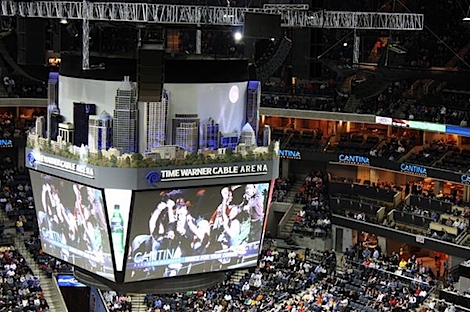 Yup – made it on the scoreboard again. lol 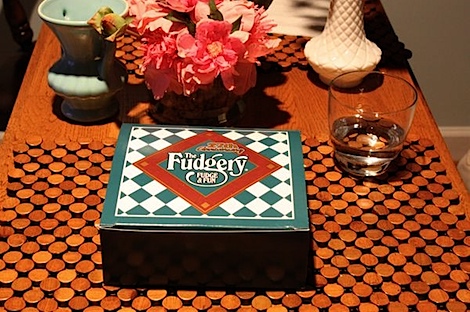 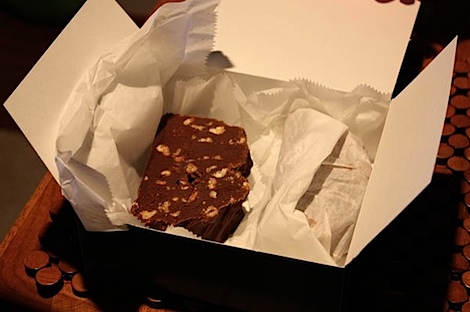 In celebration of my accomplishment, hubby and I got some The Fudgery fudge! Nom. I got dark chocolate with nuts and he got caramel chocolate.

Up for a challenge? Think of something you’re afraid of and face your fear. As Pink asks in Glitter in the Air, “Have you ever looked fear in the face and said I just don’t care?” I did that with the Bobcat performance and it was awesome! If I can do it, you can do it.

Take this quote and print it out to help give you motivation. Put it up somewhere you’ll see it often. This is one of my favorites:

“You gain strength, courage, and confidence by every experience in which you really stop to look fear in the face. You must do the thing which you think you cannot do.” ~ Eleanor Roosevelt

I think Eleanor is absolutely right. I really do feel more empowered and more confident in myself after having done this Bobcats zumba performance. What an amazing experience! I learned not only that I can perform in front of people but that I can have fun with it. Take THAT stage fright demons! Hi-yah!

16 thoughts on “Zumba with the Bobcats (and Conquering Stage Fright)”