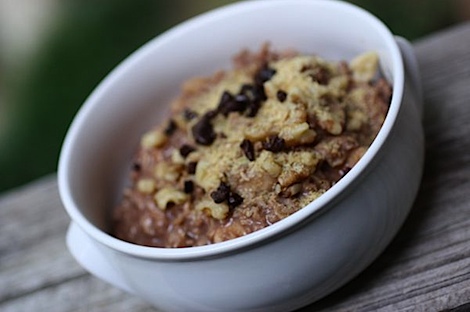 Breakfast was an amazing bowl of oats! 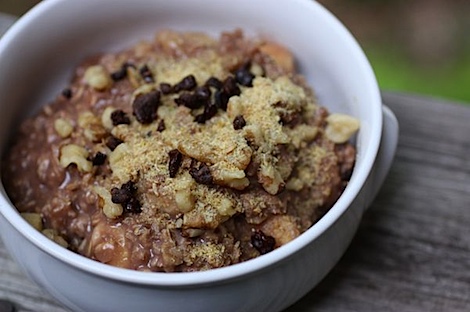 I swear when I haven’t had my oat fix in awhile I start craving it! 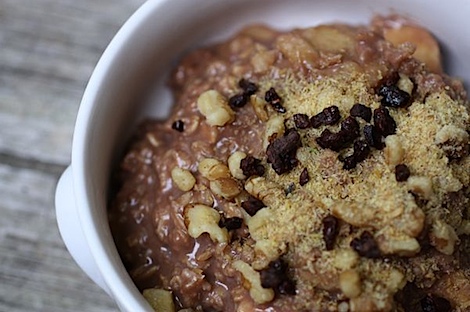 Today I made oatmeal for me and hubby: Banana Chocolate Oats.

Sounds decadent but the bananas were my only sweetener. I did sprinkle a lil sugar in hubby’s because he likes his sweeter. 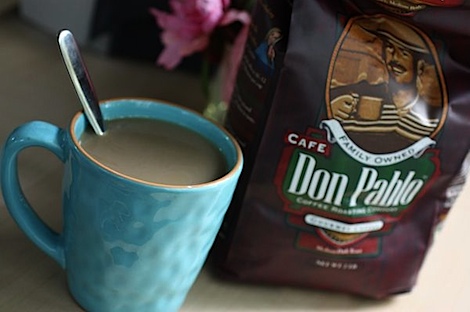 Breakfast was enhanced by today’s brew: the Don Pablo coffee we picked up at Costco over the weekend. I really enjoyed the smooth coffee flavor – it’s just the way I like my breakfast coffee (kind of reminds me of Fresh Market Breakfast Blend). Glad we picked this up! (and remember to stay tuned for a free coffee contest! I’ll let you know once I hear back from Don Pablo himself!) 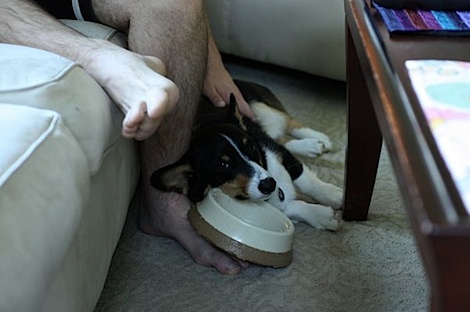 Bailey tried to tell hubby when he was ready for breakfast today by placing his food bowl on hubby’s foot. Subtle, Bailey…subtle. 😆 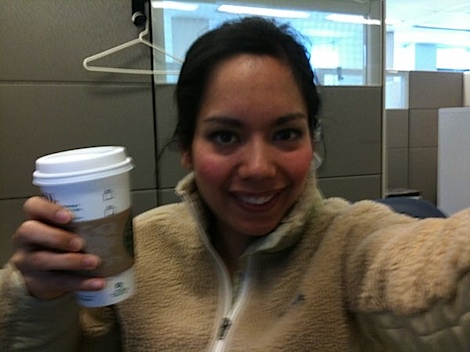 Did anyone celebrate Starbucks Monday with me?!

I had a grande vanilla soy latte! 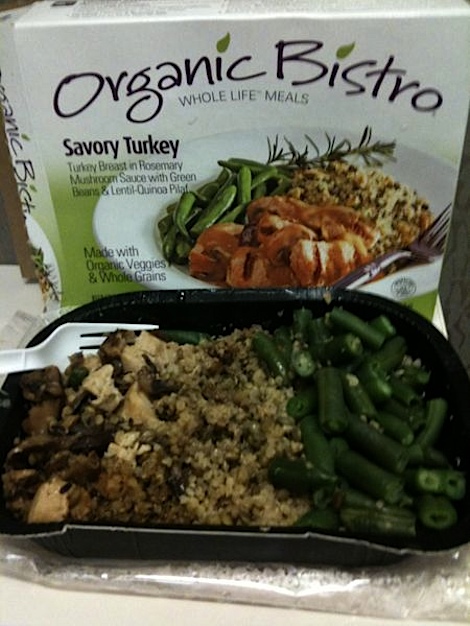 I depended on the freezer for my eats today. 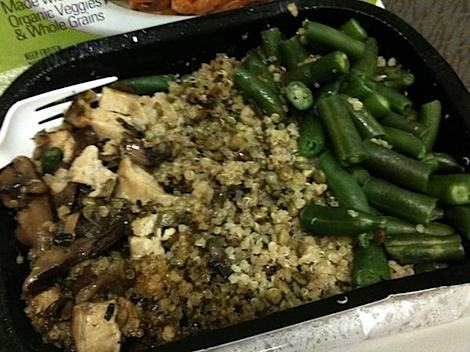 You guys know I don’t really like frozen meals, but if I’m going to have one, the Organic Bistro ones are pretty good. I enjoyed this savory turkey flavor – esp the mushroom sauce. The green beans weren’t too mushy either. Not to mention it came with quinoa (I’m a big fan of quinoa)! Neat, no?! 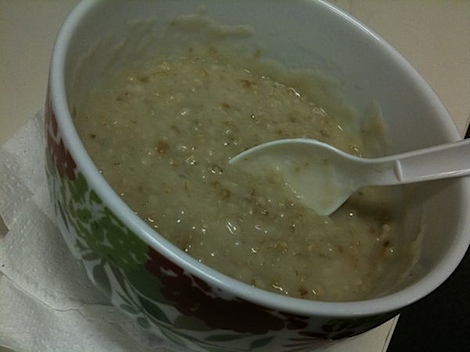 Snack = TJ’s frozen steel cut oats. Kind of weird to 1. have oatmeal twice in one day and 2. have oatmeal without toppings. It was pretty good as is. 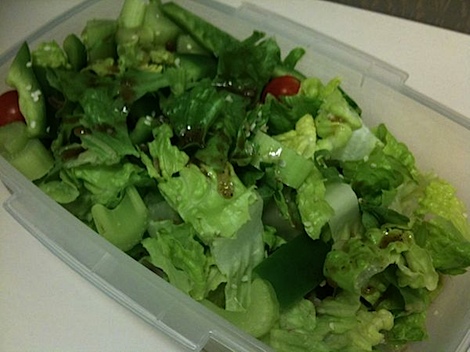 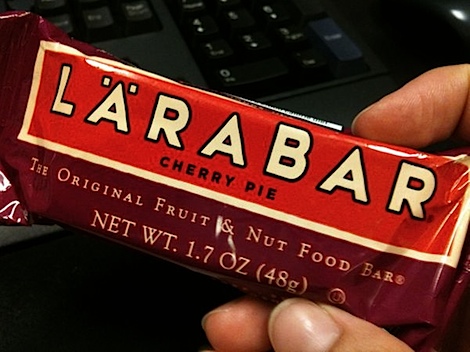 Pre-workout snack = Cherry Pie Larabar. Well…just half. I ate the other half post-workout today.

Post work I had a double header of ZUMBA!

I struggled a bit energy wise in class one. 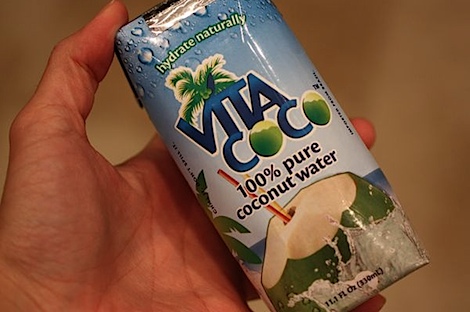 Between classes I downed this Vita Coco coconut water.

I think the coconut water really gave me an energy boost! I felt more energized during the second class (yes! after I already worked out for an hour!). 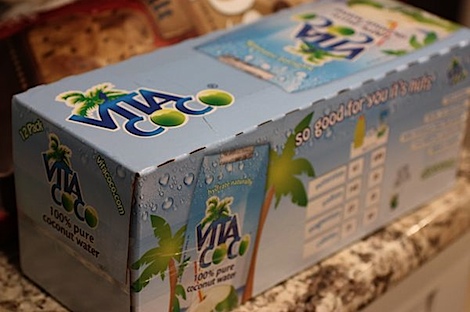 Hubby actually signed up for our Costco account today (yay!) so I had him pick up more coconut water. It’s such a good deal there and I think I’m only going to be drinking more and more of this stuff! 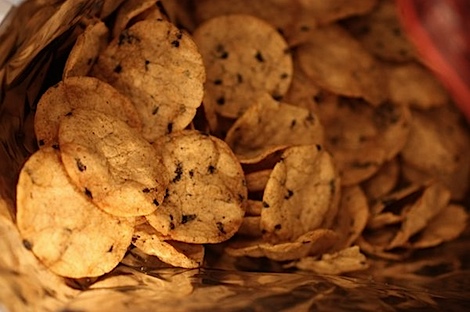 He also got me some rice milk and some of those brown rice chips (addicting!), which I munched on pre-dinner. 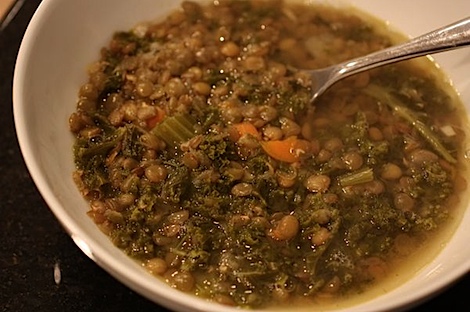 And since I didn’t get home till close to 9pm (I’m such a chatty Cathy post workout!), I opted for some Lemony Lentil soup (heated stovetop from frozen).

What’s your favorite way to hydrate during your workouts?