I let hubby make plans for our last dinner in Asheville for this trip. After some time relaxing on the porch, we got ready for dinner. 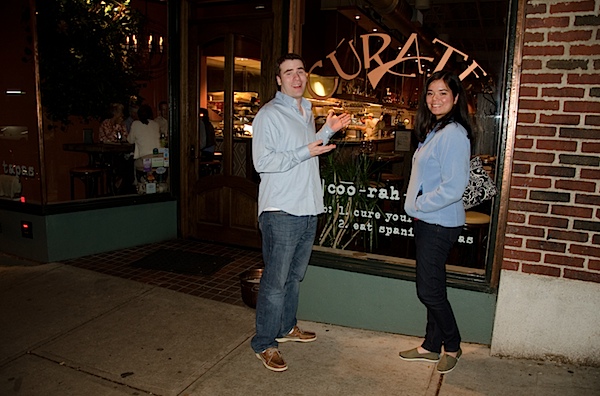 Cúrate had been on my list (of restaurants I’d researched before the trip), but after a high recommendation from one of the guys working at the B&B, hubby was ready to make reservations. 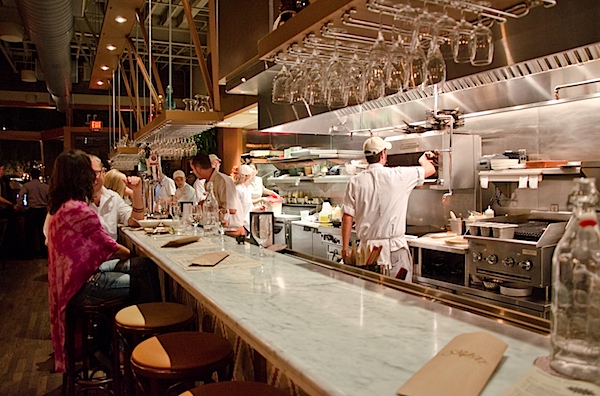 All the Yelp reviews I’d read said to sit at the bar (or “tapas bar” or “cooking line”) if you could. I wasn’t sure exactly what they meant (like a traditional bar?), but as it turns out, there really is a long “tapas bar” in the middle of the restaurant. On one side are bar stools and a long counter, on the other, a dozen chefs prepare various tapas plates. 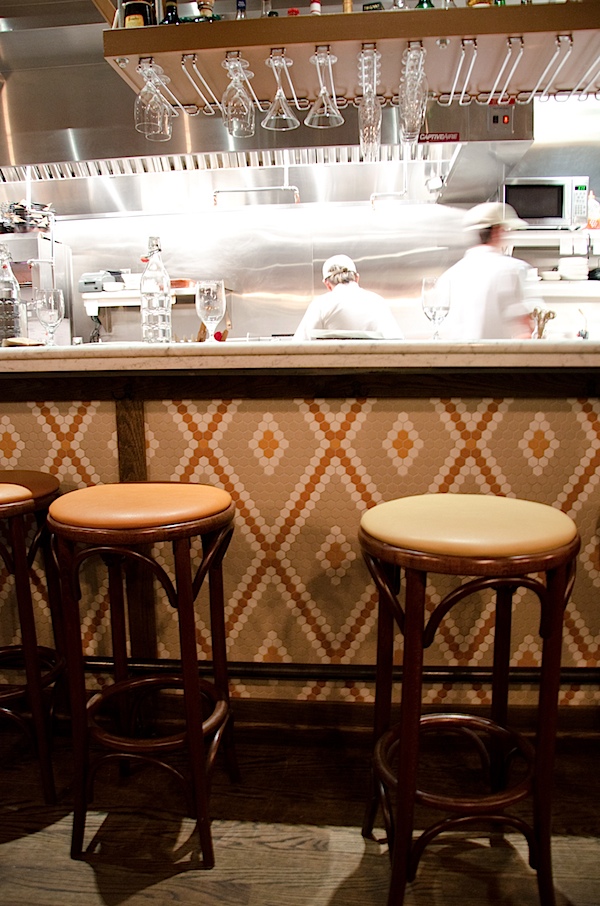 {The view to my left from our table}

Hubby had tried to indicate that we wanted to sit at the “cooking line” in his OpenTable reservation, but they must not have had any availability there because they sat us at a four-top next to the bar. We figured it was better for our party of 3 anyways. 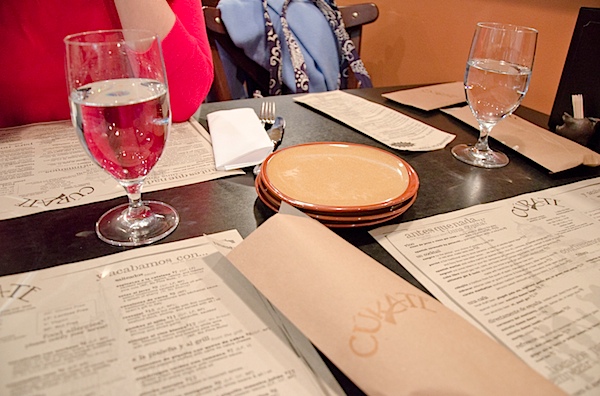 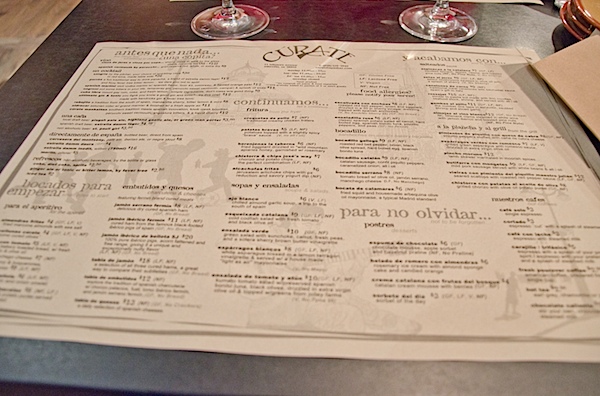 {The menu – it was quite large} 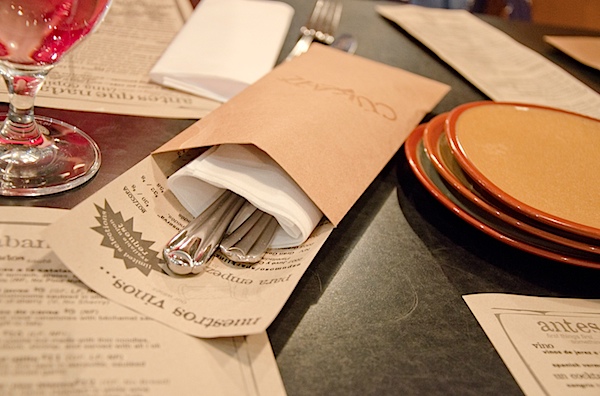 I thought the silverware/napkin/wine list had an interesting presentation. 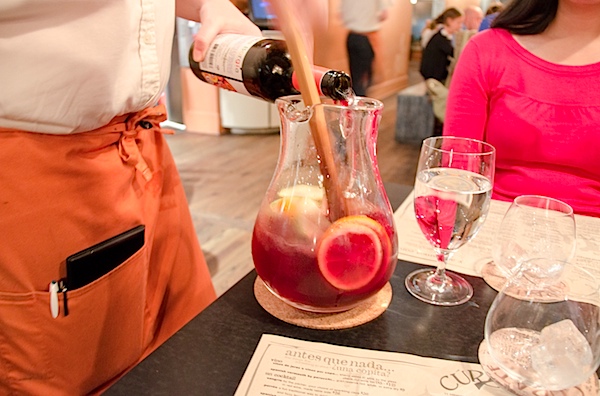 Even though we read on Yelp that the sangria wasn’t very good, we tried it. I love sangria! 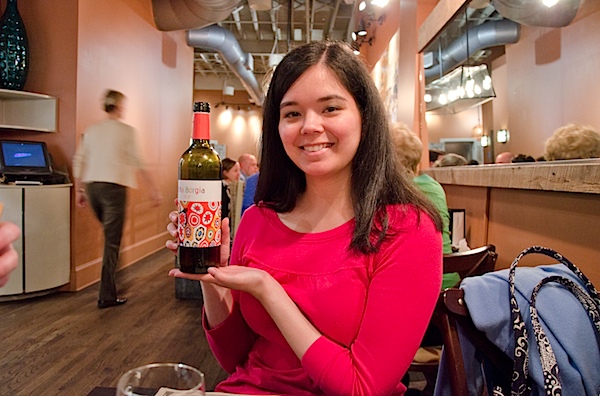 The sangria is prepared table-side with a whole bottle of wine. 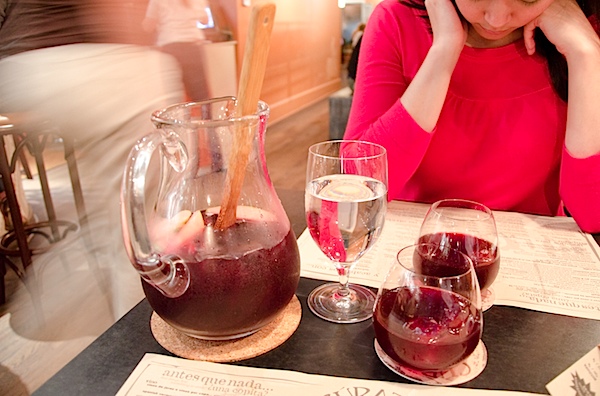 The sangria wasn’t really our cup of tea. I know Cúrate is known for serving authentic Spanish tapas, so maybe the sweeter, fruitier sangria I’m used to (and was more what I was expecting) isn’t how sangria is actually supposed to taste? This one tasted like red wine with a splash of fruit juice. I wouldn’t say it wasn’t good…just that it wasn’t what we expected. It did grow on me as we continued with dinner. 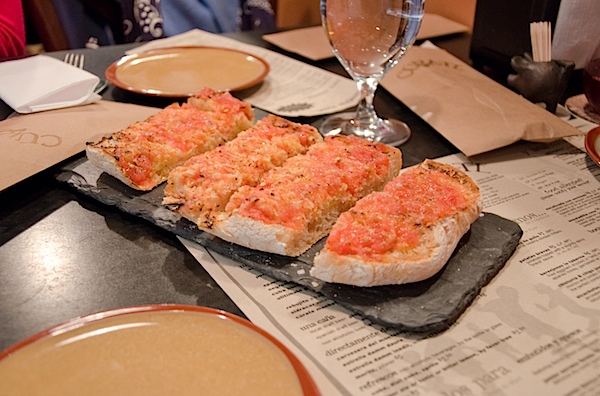 We each selected a couple tapas to try. On our first order, we requested three – the bread with olive oil and fresh tomato was one of them. Hubby and Sis really liked this one. I have an aversion to bread when it gets soggy (with the exception of French Toast), so this one wasn’t my favorite. The bread was nice and crispy on the bottom but not so much on top. 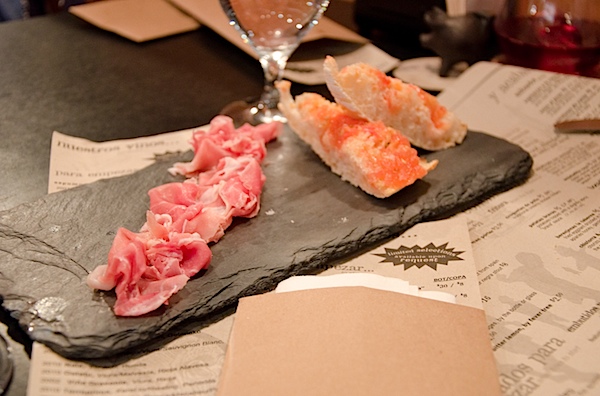 Also ordered on round 1 was the cured Spanish ham, which came out with what appeared to be more of the tomato-bread. The ham had a great flavor and was really tender. 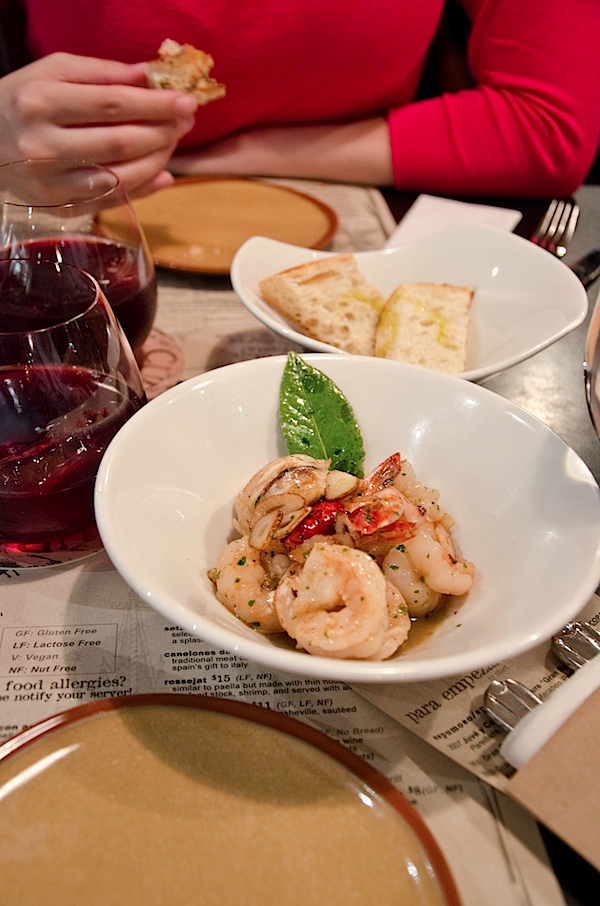 I read mixed reviews on the garlic shrimp on Yelp – some people said it was the best tapas on the menu while others said it wasn’t good. We decided to order it anyways in our first order. Personally, I really liked the shrimp. They were very tender, and the garlic slices were really tasty. 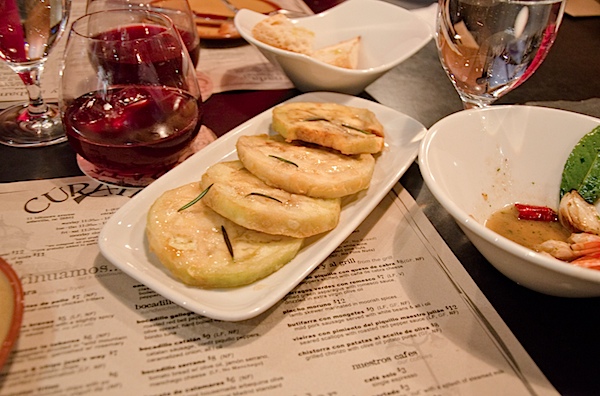 Everyone seemed to love the eggplant on Yelp, so even though none of us at the table particularly liked eggplant, we decided to try it. I would have liked it more if it had been more crispy. But, the flavor was really good – fresh rosemary and honey. Oddly enough, it tasted a bit like French toast (doused with honey instead of maple syrup). 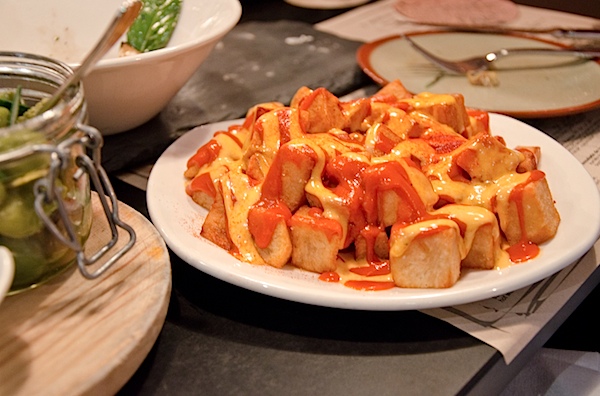 We also tried the potatoes bravas, which we all really liked. 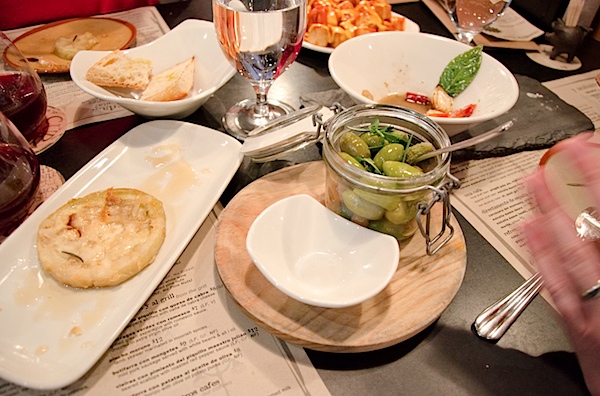 And for the first time in my life, I ordered olives at a restaurant. Thank you, Chez Panisse for converting me to an olive fan. There were 3 types of olives in the jar. I thought they had great flavor, and I really liked the presentation, too. 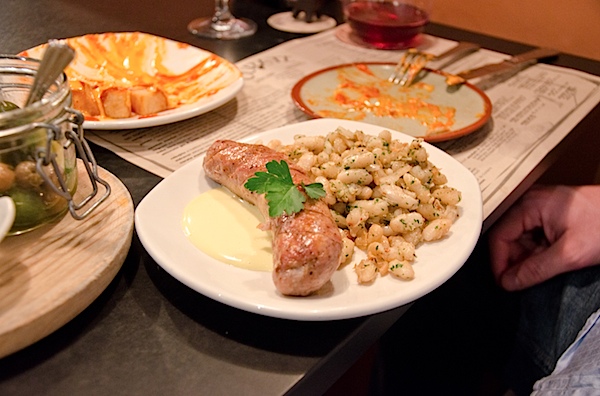 Sis and hubby really wanted to try the sausage with white beans. I’m not normally a sausage fan, but I really liked this one. The sausage had great texture and flavor, and I really liked how the beans were slightly crispy. 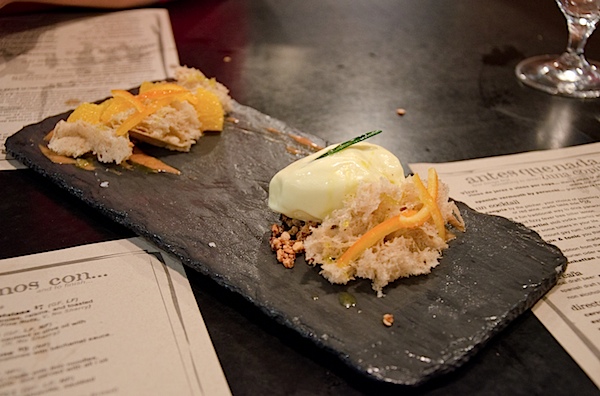 All of the desserts on the menu were cold – ice cream, mousse, sorbet. I’m more of a cake, tart, pie and other warm or room temperature dessert type of girl, but the rosemary ice cream with almond sponge cake and candied orange sounded really good. And it was. The cake was really light and airy, but it went well with the ice cream. I especially liked the candied orange peel.

There were a couple other dishes that we wanted to try, but we ran out of room in stomachs. We’ll have to try those dishes next time!