I went to the local bowling alley last night. Why? The obvious answer is that I was there for… 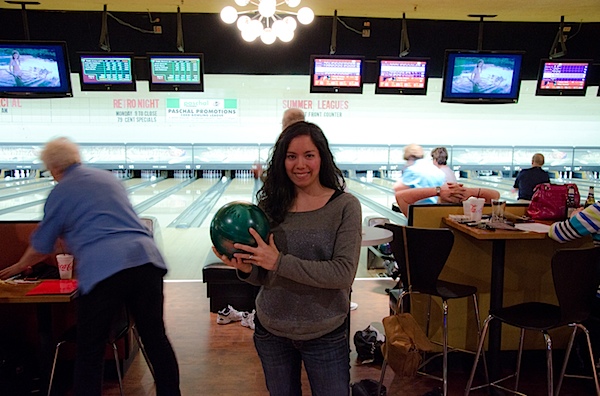 …dinner! Yup, you read that right. I went to a bowling alley for dinner. 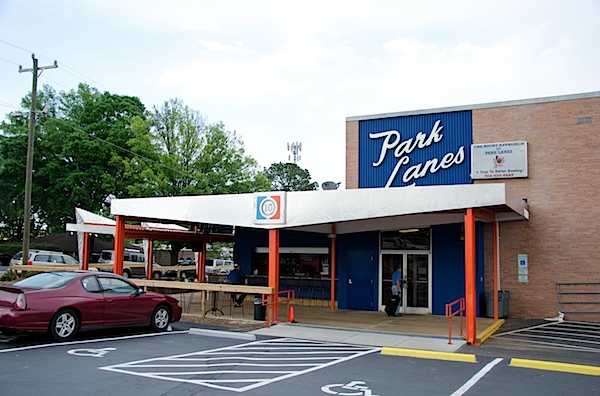 Last night, I had the opportunity to serve as quasi-press at a special preview event for the recently revamped George Pappas’ Park Lanes, now known as Ten at Park Lanes, in Charlotte, NC.

From their press release:

“The popular George Pappas’ Park Lanes is undergoing a renaissance. In addition to a new name – Ten at Park Lanes, the Montford institution will feature a restaurant featuring scratch-made comfort food and expanded entertainment areas.”

I was invited, along with other local food fans, to try out some of the restaurant’s new menu offerings. (The event was free, and I wasn’t paid to blog about this. I just thought I’d share my photos and thoughts from the evening.) 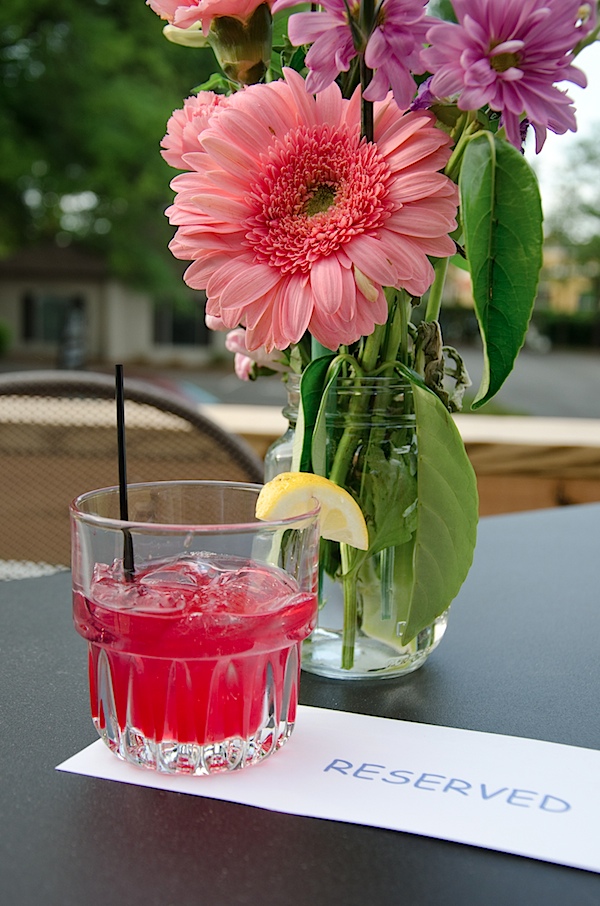 We started with a fruity cocktail on their newly renovated porch, and then headed to a covered section for more foodie-fun. 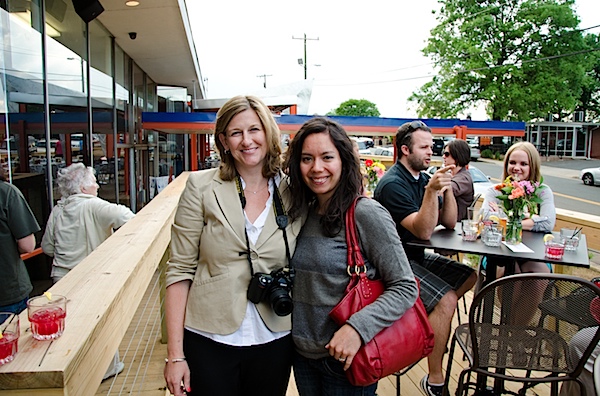 I ran into Gwen at the cocktail portion of the night. 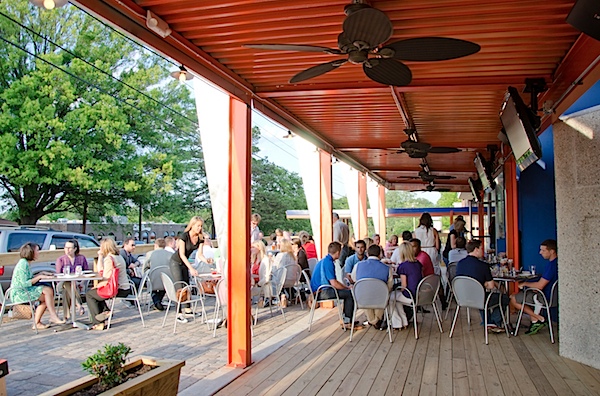 {The covered area of the new porch} 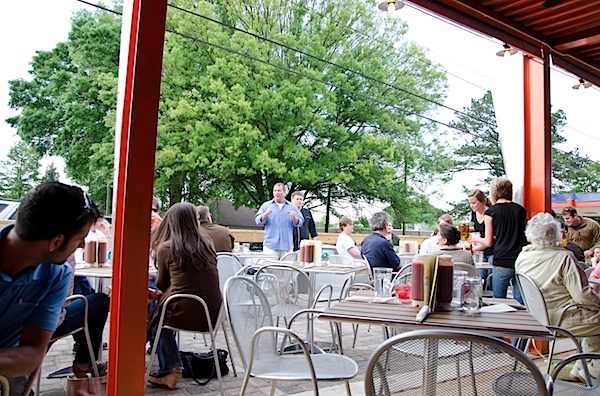 After a quick intro and walk-through of the menu, we were off the races. 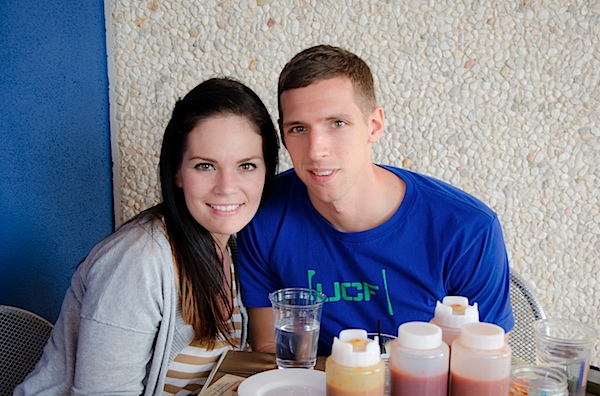 {Our new friends – Carly and Tony} 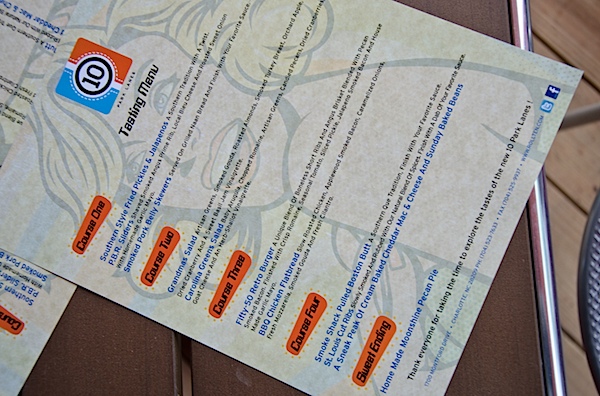 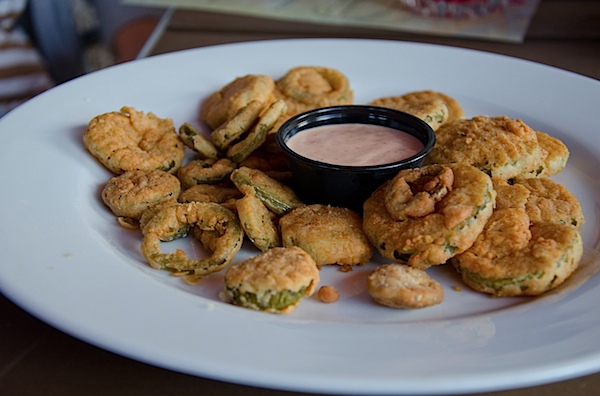 Everything was served family-style to the various tables of four.

The first course that arrived was the fried pickles & jalapenos. My spice-tolerance isn’t very high, so I normally shy away from jalapenos, but these were really good. Admittedly, I only had the ring-shaped ones, sans seeds, but I enjoyed them. I always love a fried pickle, too. I liked that the ones here are chip shaped. 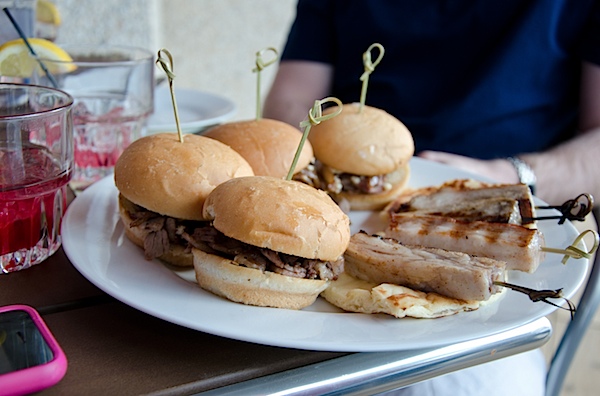 Next up, we had the PBR Sliders and Smoked Pork Belly Skewers. The sliders actually did not have Pabst Blue Ribbon in them, as they explained in the intro. I believe the PBR in the name represents the key ingredients – prime rib, bleu cheese, and roasted sweet onion. The slider was good, as was the pork belly slider, but some of the other dishes were better, and I’d probably order them first if I came back here for dinner. 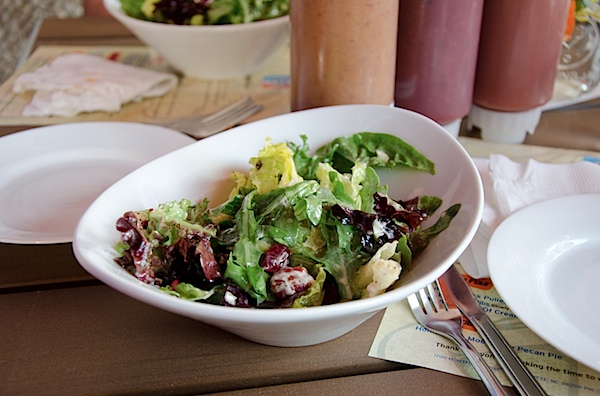 I really loved the Carolina Greens Salad. I thought all the flavors went together nicely, and I really liked the vinaigrette. 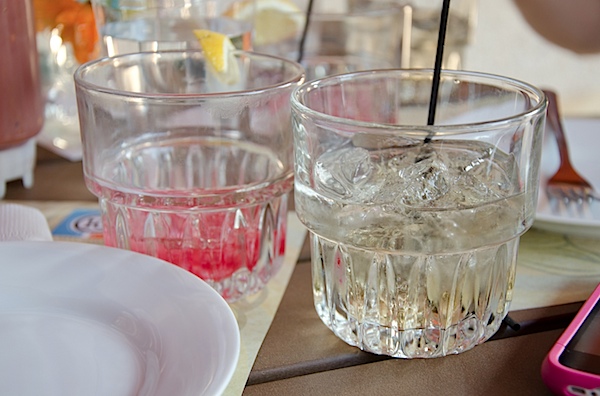 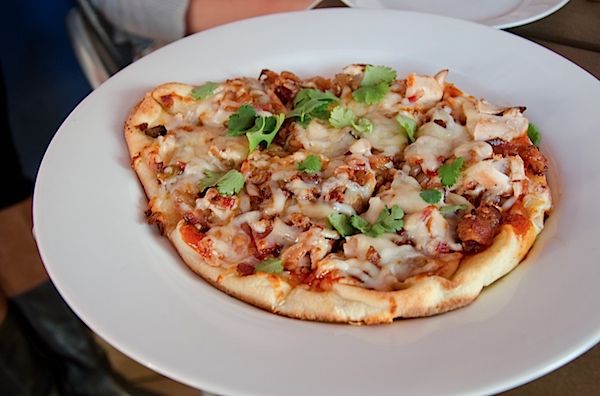 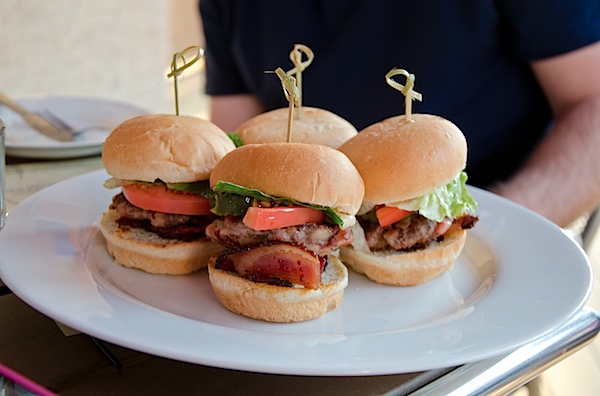 The Fifty-50 Retro Burger was probably my least favorite. This one was touted as the bacon-fanatic’s burger, and I can see why. The patty is basically made with half ground beef (a blend of short ribs and Angus brisket) and half bacon. Plus, there is an additional piece of jalapeno bacon on the slider. I thought the idea was unique, but I’m big on texture when it comes to bacon. I don’t like when it’s soft or chewy. I prefer my bacon crisp for whatever weird reason. The bacon that was mixed with the beef in the patty stayed really soft, so it was just a texture thing for me. The slider well prepared and had a nice presentation. It’s a cool concept – just not for me. 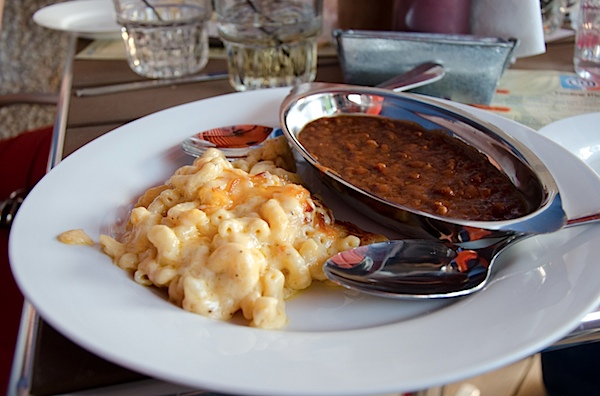 The mac and cheese was awesome and reminded me of my dad’s version. The baked beans were pretty good, but a little saucy for my liking. 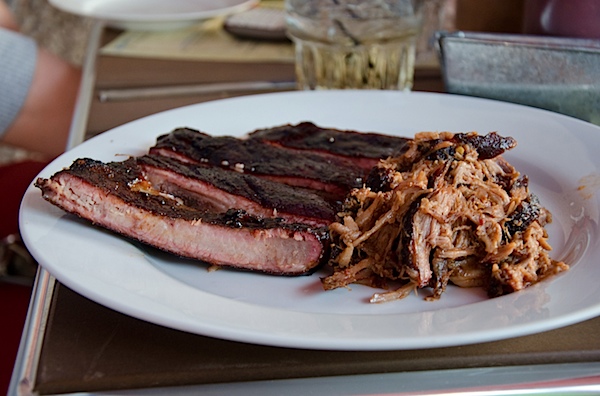 My other favorites were the ribs and pulled pork. This is probably a good thing because, as I understood it, Ten at Park Lanes wanted to be known for BBQ. I thought the ribs were nice and meaty and had a great glaze. Plus, I liked the crisp outside and tender inside. The pulled pork was nice and smokey and went well with the sauces. 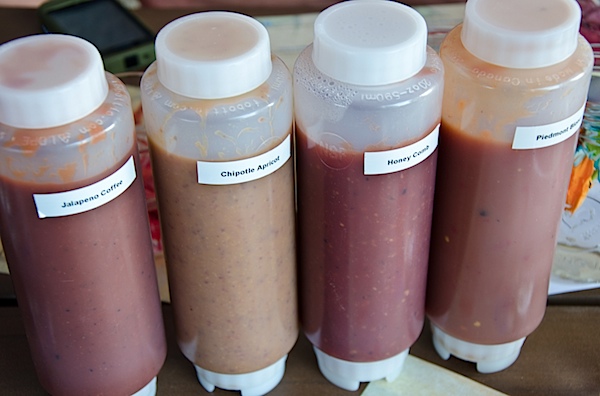 They had four tasty sauces by the way: jalapeno coffee, chipotle apricot, honey comb, and piedmont-something (I can’t remember the exact name of the last one). I thought it was cool that their sauces were all so unique and distinctive. I tried all of them except the chipotle apricot and liked them all. The piedmont was my favorite of the group. 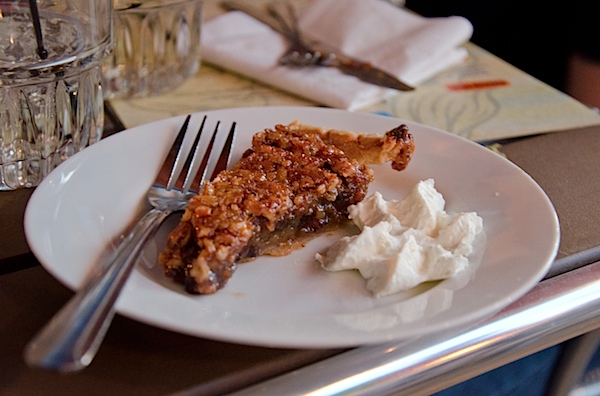 And for the last course – homemade moonshine pecan pie. I could just barely taste hints of the moonshine, which made for an interesting flavor. The inside was very soft and sweet, and the pie had a thin crust, which didn’t stand out as much as the filling. I think this will be a nice addition to their menu, especially since I don’t seem to see a lot of pecan pies around town. 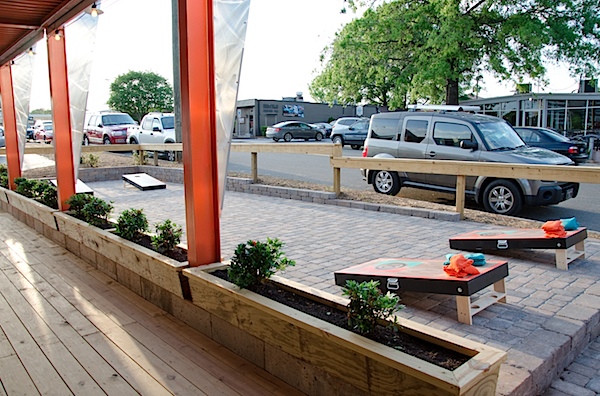 After dinner, we took a quick walk around the revamped bowling alley. I think people are going to love the outdoor area. They have cornhole, plenty of seating, and plans to add bocce ball and ping pong tables. 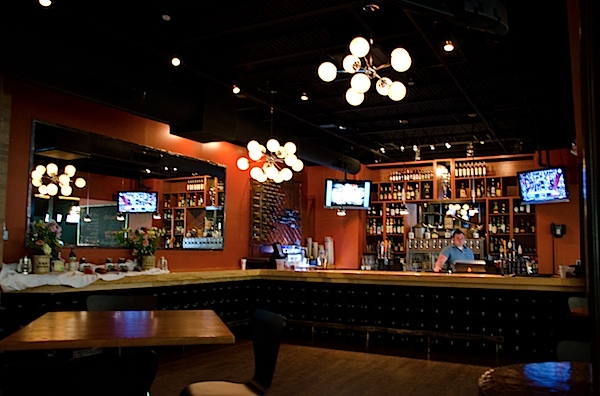 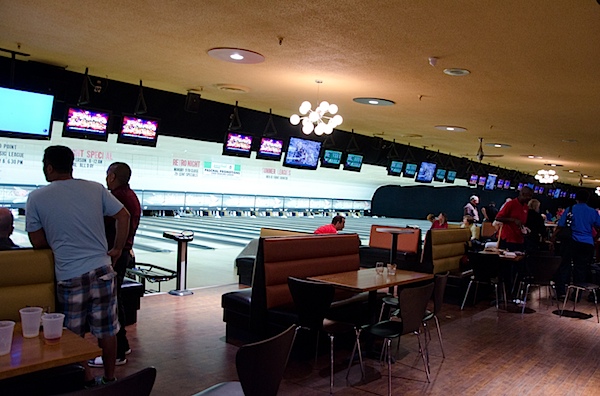 One of the things that I really liked about their remodel is that they strove to stay true to their roots.

From the press release:

“Williams says the bowling alley has been renovated to look more like it did when it was built. “We want to honor the building — the look and the architectural style,” he explains.“ 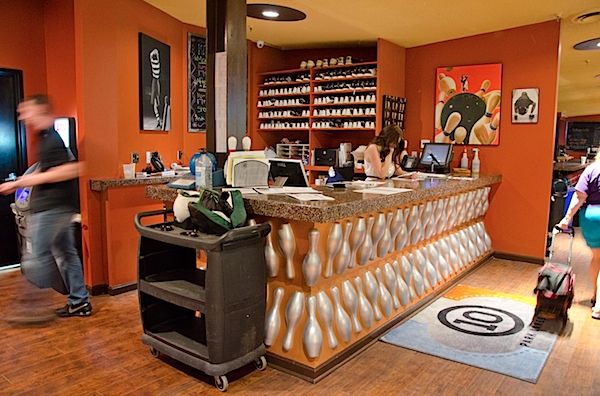 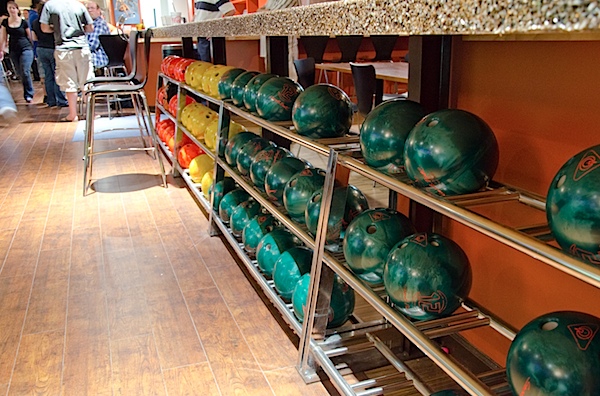 They offered us the chance to test out the bowling alley, but hubby and I decided to call it a night.

I really like what they’ve done with the Park Lanes bowling alley. We have a nice bowling alley uptown, but that one is very modern and swanky. I think I’d probably end up spending more time at Ten at Park Lanes since it has more of a casual, neighborhood atmosphere. Plus, Park Ten has all the from-scratch, comfort food eats!