I’m working on going to bed earlier, so I’ll make this quick. 🙂 At least I’ll try… 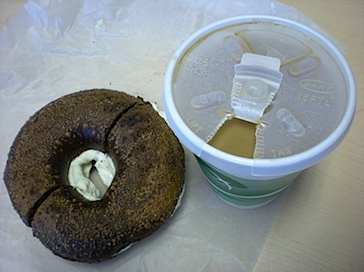 I woke up around 6:30am today, but hit snooze for what seemed like forever. I’d really like to work on getting a regular schedule. I used to think if I went to bed earlier, I’d wake up earlier, but now I’m thinking that I may have to force myself to get up early (and possibly exercise in the AM) and by doing so will be so tired at night and I will have no choice but to go to bed early. (I should add that I sometimes/often have a hard time getting to bed, so being extra tired/sleepy helps me a lot). I had a Fresh Market Breakfast Blend cup of coffee (about 1 1/2 8-ounce cups worth) with 2 tsp sugar, 2 tbsp 2% milk.

Anywho, today was my Monday bagel day, so I got a pumpernickel with plain cream cheese and a small Mocha Java coffee with milk and sugar. Not sure how much the nice ladies at the bagel place add to the coffee, but I estimate I ate about 2 tbsp of cream cheese. Some days I get light, but today, I went for the real thing. 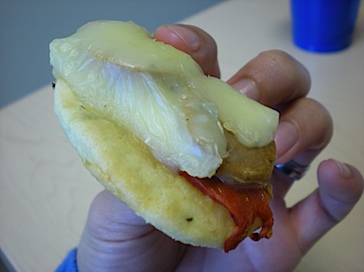 My co-worker brought some yummy samples of apps he made – handmade flatbread (which he saw on smittenkitchen.com), topped with roasted red pepper, 2 small pieces of chicken sausage (I don’t usually like sausage but this stuff, from Trader Joe’s, was surprisingly tasty), and a piece of cheese (not sure what kind…prolly mozz). He handed it to me this way and I didn’t have any plates around, so I just downed it right then and there. It was a nice snack to tide me over till lunch. I also had a cup of water. 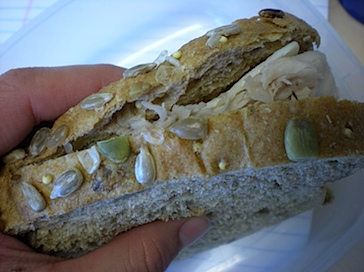 I guess the bagel and snack held me over longer than I expected, because I didn’t end up eating lunch till around 1:45pm. I had some roasted turkey break with white american cheese on Great Harvest Dakota bread. I know…no toppings, no sauce…kinda boring, but I kinda like it like this most days. I also end up eating these when my pantry is running low and I’m not trying to get anything since I’m getting all that produce delivered tomorrow.

I also had some salted almonds and a big cup of water.

Shortly after lunch, I had a craving for something hot, so I made a cup of Yogi Tea in Lemon Ginger with 1 tsp of sugar (since I don’t have honey at the office, which reminds me – mental note – get honey for office). It was so good and helped me stay warm in the cold office.

I ended up staying extra late for work. I worked about 10 hours today and didn’t leave till just after 7PM. Thank goodness I had some snack bars laying around because I was starving! I had my Kind Macadamia + Apricot bar and it was delish! I can see this becoming one of my faves very quickly. It was so nice to have a fruit and not bar that:
1. did not have raisins in it (not obvious ones at least…guess I should have read the label)
2. wasn’t all goopy, heavy, and thick tasting
3. had great texture

This bar reminded me of a jacked up granola bar, but more chewy with nice hints of apricot and coconut. Yum! 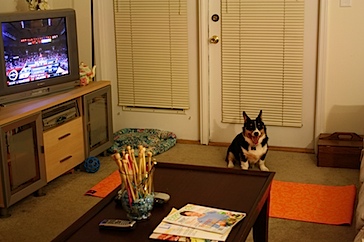 I thought this photo of Bailey yawning was pretty funny, no?

I was so tired after work, mostly mentally, I think, that I didn’t really want to do anything. For sure, I wasn’t going to the grocery store…thank goodness for storing leftovers properly (see below). Anywho, by the time I got home, I felt like I could really use something to de-stress, so I decided that since my wrist wasn’t bugging me as much as it did last week, I’d try out that Namaste Yoga I DVR’ed off of FitTV. The lesson was quite short – about 20 minutes after commercials and stuff. I used to do Power Yoga at the Y and that was quite the experience, so this was a piece of cake. Still, I was surprised at how much the class worked my arms…they are a bit achy as I type (as is my back).

Although I didn’t feel like getting dressed up to go work out somewhere, it was great to be able to do something quick from the comfort of my home. I was so glad I did the Yoga because it put me in a much, much better mood. That is one of my favorite parts of yoga – how uplifting it is. 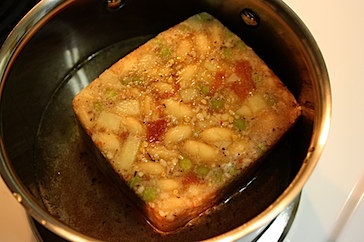 Just before getting started on my yoga, I put a frozen soup into a pot (covered) over low heat, in hopes it would be done by the time my yoga was over.

Would you know, the soup was done (read: defrosted) by the time the class was over! But, hubby was away at class, so I waited till he came home to eat since it could stay warm on the stove. I also made 2 small pieces of toast to go along with the soup. Both the veggie soup and Great Harvest Flax Oat Bran bread were leftovers I put in the freezer earlier. I love having these emergency foods on hand for those nights when you simply don’t have the energy to, or simply don’t want to, cook. 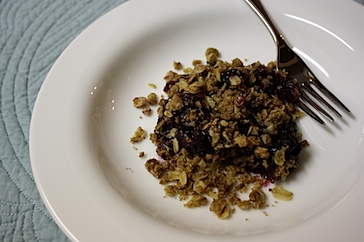 Since dinner was so light, and since my blueberries were getting old, I made a blueberry crisp for dessert tonight. I estimate that I had about, or just over, 1/2 cup. I like to think of this as a slightly healthier version of “dessert”, even though it’s probably not great (not like a piece of raw fruit), but hey, at least I got one fruit serving! 🙂