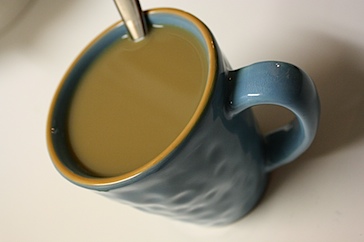 Hubby took care of the dog this AM and let me sleep in till about 9:45 am today. I really needed to catch up, so the extra sleep was more than welcome. Thanks babe! By the time I got up, hubby had already made coffee and was pouring muffin batter for breakfast. I had my usual AM FM Breakfast Blend + 2 tsp sugar + 2 tbsp 2% milk. 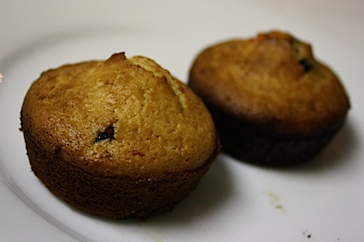 I also had 2 muffins – these are from the Martha White Wildberry mix. We like to keep these on hand because they only require milk, so you can eat in a pinch. 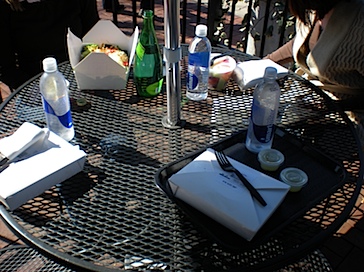 Before I knew it, it was time to get ready for lunch. I met up with Kath, Michelle, and Amanda for a girls’ lunch outing. We grabbed food from Dean & Deluca and ate outside to enjoy the 70(ish) degrees F weather. It was wonderful! 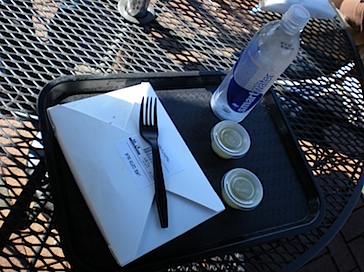 I couldn’t find anywhere to get tap water (sneaky, sneaky, D&D!), so I tried out one of those Smart Waters I’ve been seeing everywhere. 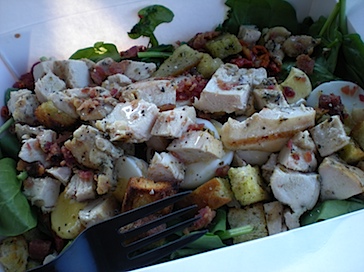 I also had a Chicken-Spinach salad. In the box: spinach, grilled chicken, 1 hard-boiled egg, croutons, sundried tomatoes, bacon, and a feta-vinaigrette. The salad was awesome, but I wish I had gotten their balsamic vinaigrette dressing…this one was kinda tasteless while their BV is delish! 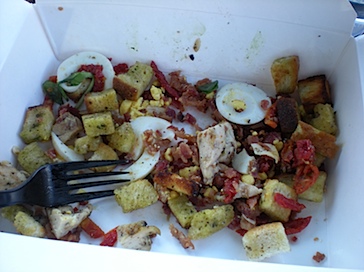 I did my best, but I couldn’t quite finish it. I tried to eat all the meat out of it, though.

After lunch, we headed to see the movie He’s Just Not That Into You. The movie was even better than I thought it would be! I was thinking that I didn’t need to see it since I’m married and don’t need to worry about dating games, but the movie was very entertaining and I’m so glad I saw it. I even got a few jelly beans from Kath and some sour patch kids from Michelle. Yum! Thanks girls for the fun lunch outing!

Next on my movie-list: Confessions of a Shopaholic. 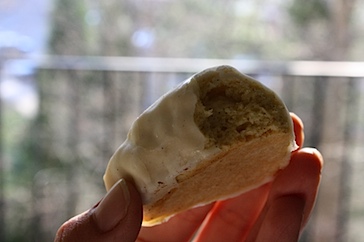 Even though I only ordered one of those mini vanilla scones at S-bucks last night, the chick gave me two (only charged for one). I was so stuffed last night, I couldn’t eat the second one, so I had it today. It tasted really good – especially since it was on its second day. 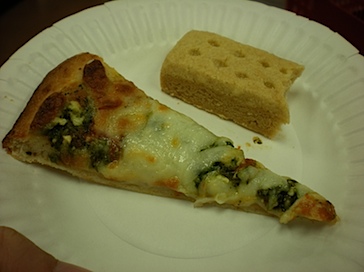 Later in the day, Hubby and I went to Trader Joe’s to get some food for dinner. We got a sample of some of their frozen spinach pizza (so good!) and some shortbread. The pizza sample prompted us to get a box of the BBQ Chicken, which will probably resurface later this week. 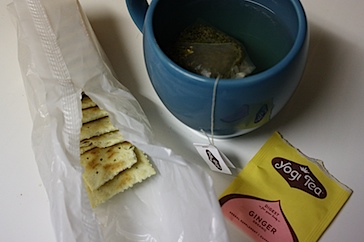 Sometime after getting home from TJ’s, I started feeling bad. My stomach was starting to feel uneasy and my head was hurting. I had some saltines and some Yogi Tea in Ginger. It helped a little, but I still feel bad as I type. 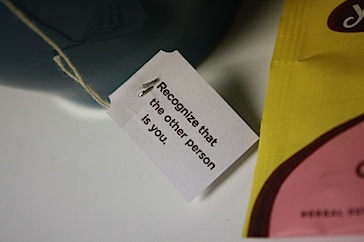 Yogi Tea quote of the day – “Recognize that the other person is you.”

7:45 pm – Chinese Take Out – Still a Little Uneasy, but Satisfied 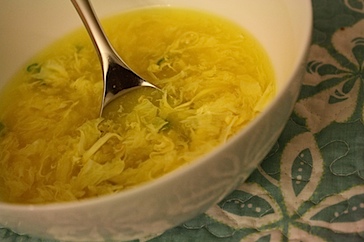 By the evening, I wasn’t feeling much better and definitely did not feel like cooking what we got at TJ’s. I sent hubby out for one of my sick-y day comfort foods – chinese. I got some egg drop soup… 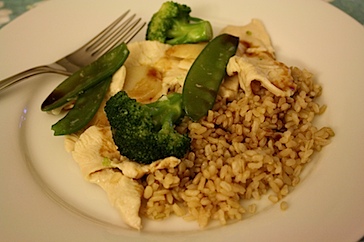 …and some bland Moo Goo Gai Pan drizzled with a wee bit of soy sauce. 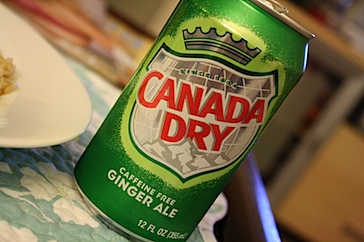 I also had another upset-stomach-go-to: Ginger Ale. I had about half of this can. 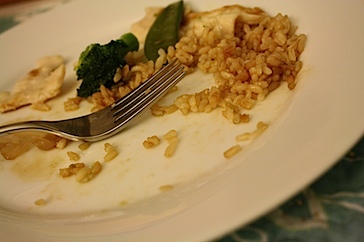 Something must really be up because I couldn’t even finish the portion I set out, which is what I normally eat. Yuck! I hate feeling like this! 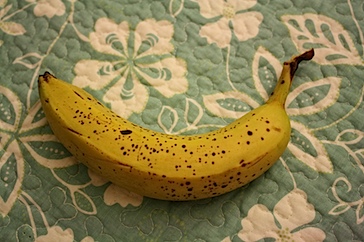 I decided to try one last stomach-settling trick that my mom always directs me to eat in such situations – bananas. Well, I only had 1 to be specific. I do feel a little better, but now all I want is a good night’s sleep.

One last post to do – the weekly food challenge. Almost bed time!