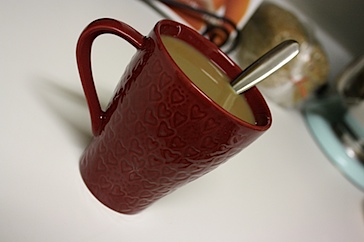 I finally got to use my new mug today! Aren’t those hearts adorable? They make me smile. 🙂 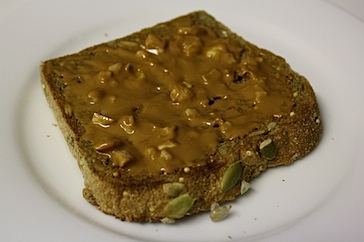 For breakfast, I had a piece of Dakota toast with about 1 tbsp of Barney Butter. I intended to have 2 pieces, but was running late for work and was content with 1. I was pretty hungry by lunch time, so I’ll have to remember to eat 2 next time if I want to go for a later lunch. 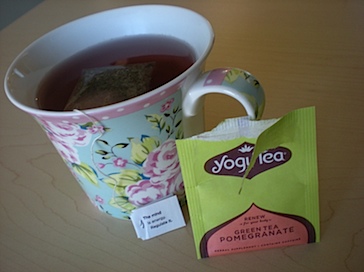 I also got to use my other new mug today with some Yogi Tea. My co-worker shared this Yogi Tea Green Tea Pomegranate, which was quite good and, I think, better than the Republic of Tea version. 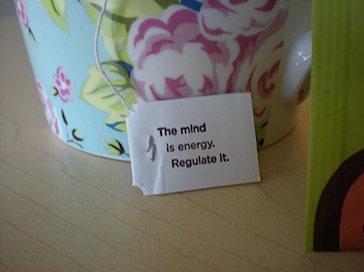 Yogi Tea quote of the day #1: “The Mind is energy. Regulate it.” 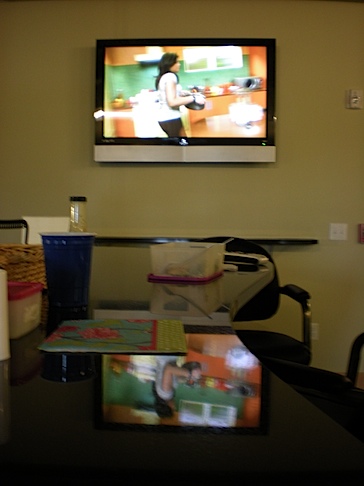 I’ve been spending my lunch breaks in front of the break room TV watching Food TV. It seems to be the only time I watch it any more, even though I have a TON of DVR’ed shows that need to be watched. 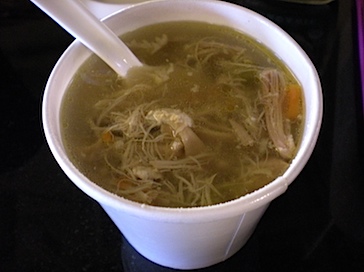 I brought another salad today, but needed to pick up some salad dressing at the store, so I went out with a co-worker and we got soup to combat the uber-chilly weather today…very brisk!

I spoke with the lady at the store who makes their soups and she was saying it should be very healthy. She bakes chicken and then uses the baked meat to create the soup. The chicken is all-natural and the veggies are organic. I just think it tastes good and am glad to find some sort of homemade soup for purchase on the cheap ($1.99 per cup). 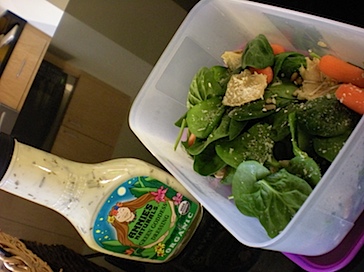 I ended up picking up Annie’s Natural Green Goddess dressing and was so excited to try it on my salad. It may look familiar…it’s the same thing I had yesterday. I made a salad for hubby yesterday and he didn’t eat it, so I ate his today. As for the salad dressing…I didn’t really like it. I think I was in the mood for more of a vinaigrette and this one is pretty creamy. Oh well! 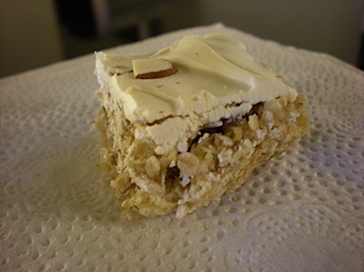 My other co-worker asked me to pick up a granola bar if I saw one so I grabbed one I saw near the cash register. He gave me 1/4 of the bar to sample. I thought it was pretty good, but tasted kinda of “diet-y.” 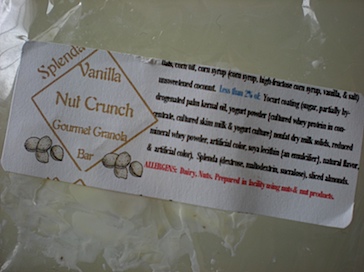 I checked the wrapper and realized it was made with Splenda…Eww! I hate sugar replacements. I totally understand that they work for other people, but I also know they do not work for me. Give me real sugar!

Anywho, I still thought this bar was pretty good, but will look for a non-sugar-substitute version next time. 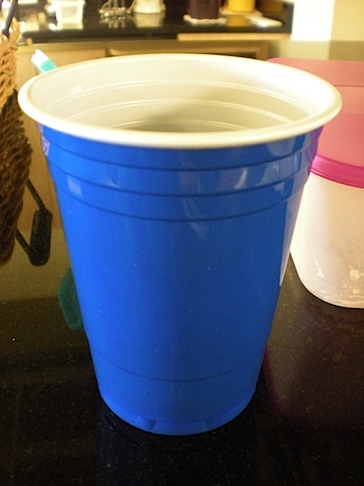 I had a big cup of water with lunch. I was planning on working out after work, so I was trying to get lots of hydration, though I have heard that you’re supposed to get hydration for a workout the day before you want to work out (in addition). Any one know if this is true? 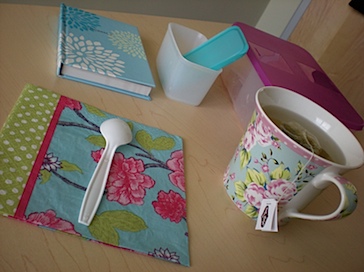 I’ve been looking at houses again now that the credit card is gone. I know we still have a long way to go to save up for a down payment and stuff, but I like to look. Hubby and I have actually been house-hunting for a couple years now, but I guess we weren’t as serious before as we thought. Anywho, I’ve been brainstorming how to decorate our future-house. I know I can’t realistically pick out furniture, etc not knowing the room dimensions, but I can start to think about color-schemes and stuff, right? I really don’t know what color schemes to go with, but I thought it was funny all my stuff was matching today and wanted to share a photo of that. You think hubby will go for this look? haha…jk. 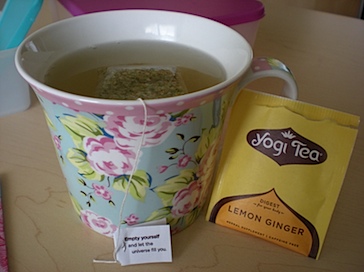 After lunch, I had another tea – Yogi Tea Lemon Ginger – with some honey. I think their Ginger tea is my fave (this one is pretty good, but I like the all-ginger tea the most). 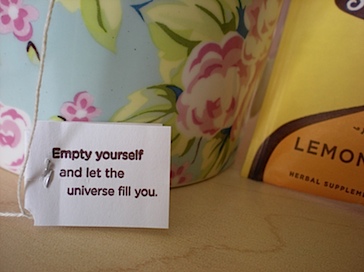 Yogi Tea Quote of the Day #2: “Empty Yourself and Let the Universe Fill You.” 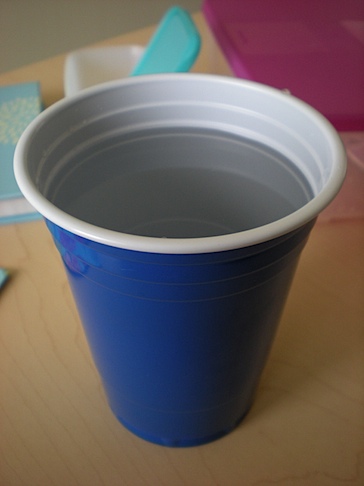 I also had some more water – about 2 cups. 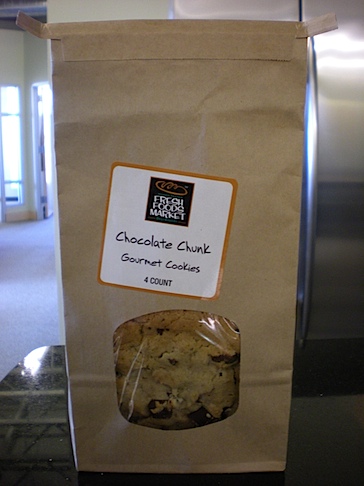 Someone put these gigantic chocolate chunk cookies in the break room to share. They were taunting me all afternoon. I don’t like to restrict myself from eating too much, since I think I eat fairly healthily in general, but I knew I would regret eating any piece of these cookies later since I was planning on a nice workout after work. 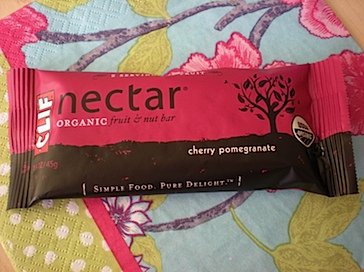 Instead, I grabbed a Clif Nectar bar in Cherry Pomegranate. This bar was fantastic! 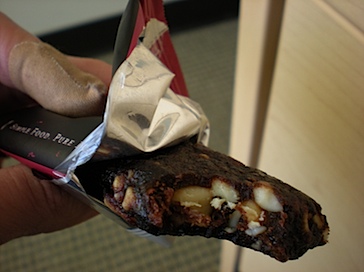 I enjoyed every bite of this bar and was sad when it was gone. This Nectar bar wasn’t as filling as others, but made for a great snack and had an awesome flavor and texture. I will definitely look for more of these!

After work, I changed at the office so I could head straight to a work-out class. Unfortunately, I ran into some unexpected traffic and missed the class by just minutes! Grr…I didn’t want to let anything stop my work out, especially since I need to get 2 more in for this week to meet my SCBR goal, so I decided to take Bailey out for a bit.

I tried something I haven’t done in a long time…running/jogging. I hate it so much. I like to exercise…I hate to run. A good friend of mine in college once said, “You should only run if a scary man or a big dog is chasing you.” I like to try to follow her advice, but I am seeing the positive effects of running on health, in general. I also noticed how worn out I was from skating earlier this week and would like to get in better shape, so a little jogging seems like a good idea.

I’ve done a little running/jogging before, but I never liked it. I totally forced myself to do it.

Bailey was a surprisingly good jogger. He and I went for way longer than I expected before he stopped to do his business. We power-walked for a bit, then jogged, then walked and repeated the whole way home. We were back before I knew it and it wasn’t so terrible afterall. We were gone about 25 minutes total.

I stretched afterwards, per SCBR, and it felt great! 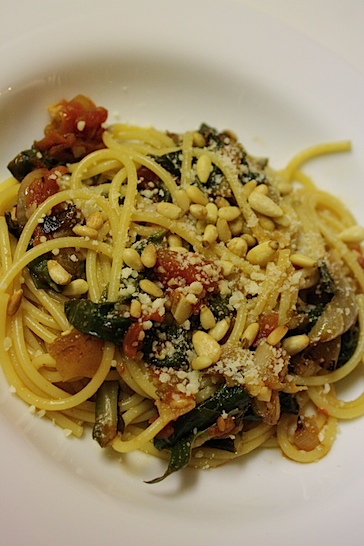 I made a variation of a Giada dish for dinner – Spaghetti with Chard and Parmesan. The meal was simple and quite tasty. I hardly noticed the lack of meat! 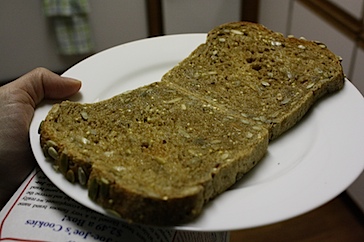 Hubby and I each had a buttered piece of Great Harvest Dakota toast. I snapped this shot while bringing the bread into the living room on top of my Trader Joe’s newsletter. 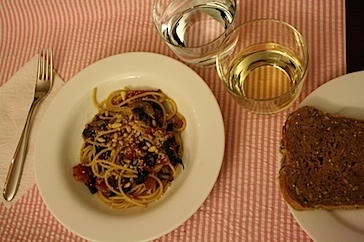 I had some water and Three-Buck-Chuck with dinner. 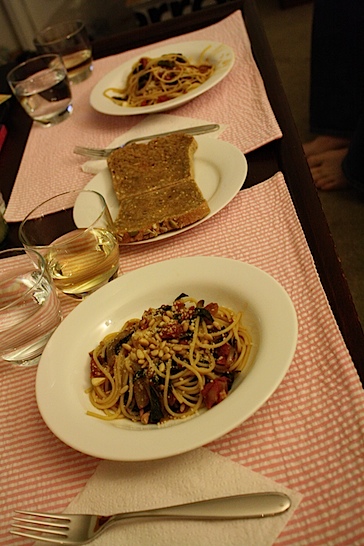 We ate on the coffee table (where we usually eat) and watched Body of Lies, which was pretty good. 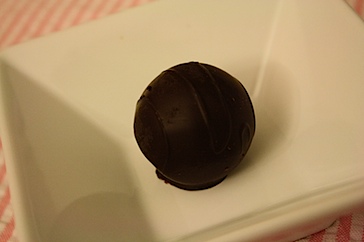 My first piece of Godiva chocolate was a dark chocolate truffle… 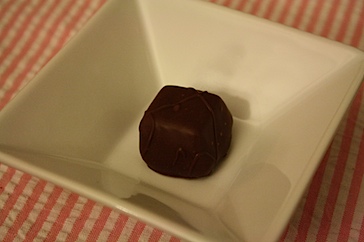 …my second was a milk-chocolate carmel-filled chocolate. So good!

The movie derailed my plans of getting stuff organized around the house, but it was nice to kick back and relax a bit.

I have a workout planned for the AM, so I need to get to bed! G’night!