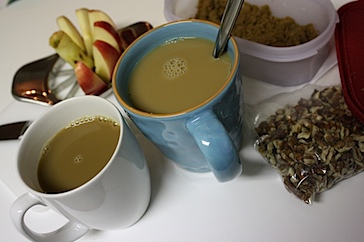 I woke up "early" today around 8:30 am but was slow moving. By 9:30 am I had taken the dog out and brewed coffee for hubby and me. I started drinking my coffee while making breakfast. I neeeeeded some coffee asap! 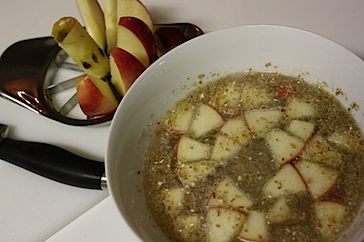 I decided to try something like those Apple Pie Oats, but with some Bob's Red Mill 10 Grain Hot Cereal instead. 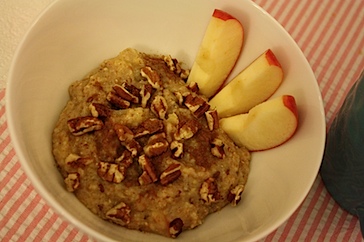 The grain cereal was good, but didn't taste nearly as much like Apple Pie as the oats earlier this week did. I still enjoyed them quite a bit and even hubby seemed to like them! I only used 1/2 the apple to cook, so I served the other half topped in the bowls.

I piddled around this morning while we figured out what to do today. As I mentioned yesterday, my school celebrated Homecoming today, however, the weather was far from cooperative. It was cold, rainy, and just plain icky outside! With plans a bit up in the air, I was glad to at least have a nice, hot breakfast with some steamy coffee. 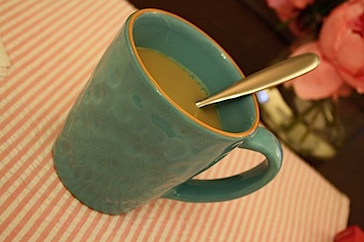 A little more coffee to help wake up. 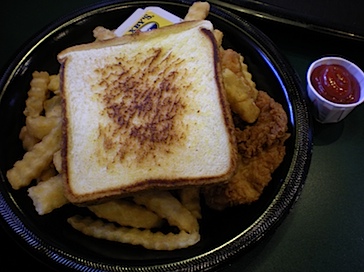 Either I've had a lot more splurges than normal, or I actually eat more fast/junk food than I thought. Hubby wanted to get food at the Homecoming basketball game today, but I talked him into Zaxby's. There are some fast food places that I have no trouble avoiding and some that have a fond place in my heart. Zaxby's falls into the latter category. I checked the nutritional information before we left and it was about what I expected, so I tried especially hard to eat intuitively and to stay under "6" (first signs of feeling full) on the SCBR Hunger Continuum. This was a challenge because everything tasted so good, I just wanted to keep eating and eating. I was able to stop myself at a reasonable point though. 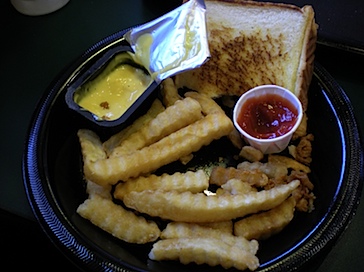 Above is the "after," which hubby happily helped finish. I ended up eating all 3 chicken fingers, about 1/2 the fries, 1/4 of the texas toast, 1/4 of the honey mustard sauce, and about 1 tbsp of ketchup. Since my portion was so small, the calorie count wasn't too ridiculous. The worst part was the complete lack of fruit/veggie servings for this meal. I probably should have brought some fruit to munch on, now that I think of it. Lunch tasted darn good, either way! 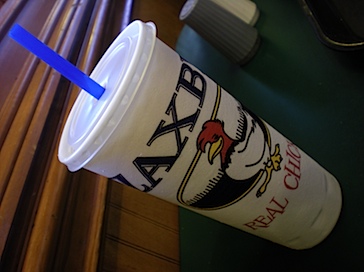 I had coca-cola for my drink, but hardly drank any. I just like a little sweetness. 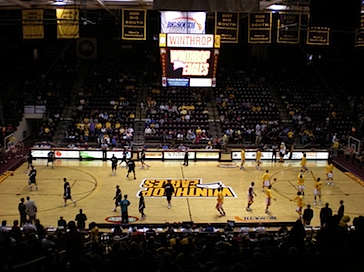 We made it to the game a little late but just before it kicked off. Luckily, Michelle + Ben had saved us some seats. The game was pretty good and we won! Yay! 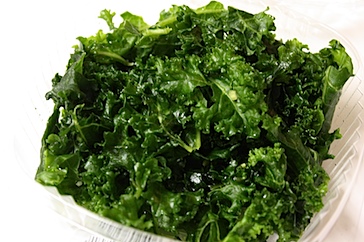 After the game, we came straight home. I checked my email and got a hankering for a snack, so I finished off the rest of the marinated kale from yesterday… 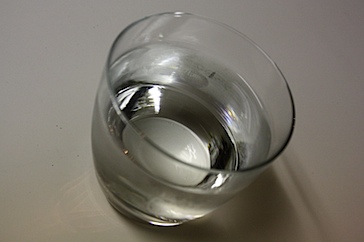 …along with some water. See…I told you I'm not good at drinking water on the weekends! I really should have had more by now! Not only that, but thank goodness I had the kale for a snack. Today's eats were pretty low on fruit and veggies! 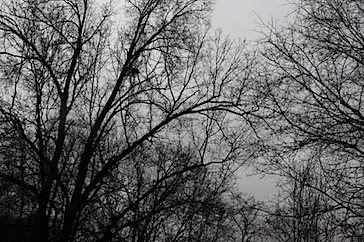 The weather outside was so cold and yucky. 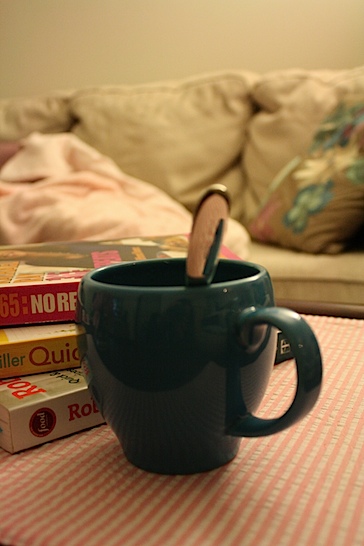 I decided to take a moment to relax and curl up on the couch with some nice, hot, peppermint tea and some cookbooks to try to figure something out for dinner. I also caught a DVR'ed Quick Fix Meals with Robin Miller for extra inspiration. 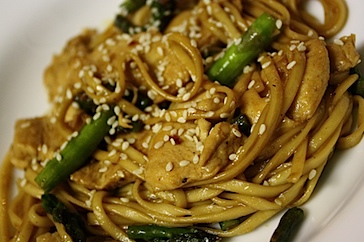 I did end up making a variation of a Robin Miller recipe. I tried to find it online, but it's not there, so I'll post my adapted version in a bit (separate post) since I made a few changes. 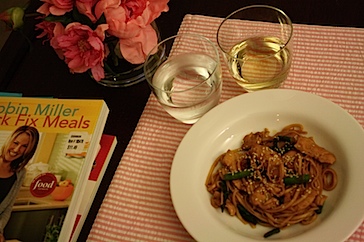 I had a wee bit of wine and some water with dinner. 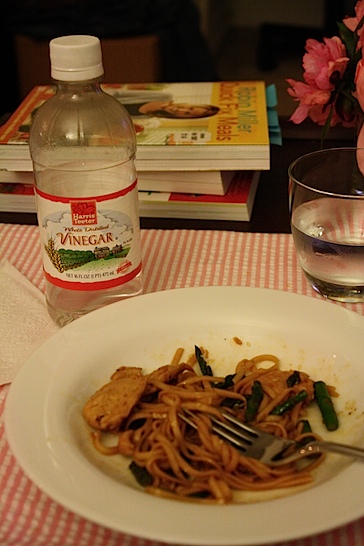 I ended up having to take a PF Changs trick and put some white vinegar on my dinner to cut the heat. It was spicy but delicious. Hubby kept raving how good it was and literally couldn't stop eating. He tried to restrain himself from eating too much but didn't seem to have any trouble polishing off the rest of dinner. I was pleased to see him finally excited about dinner…though he usually enjoys dinner quite a bit, he hasn't had that "5-yr-old-boy-eating-ice-cream" look in awhile.  I bet he doesn't even know he ate whole wheat noodles…hehe. :)  According to the noodle package, they're made from 100% whole wheat flour!  They don't even taste like it!  They just taste good!

The recipe was a good one…definitely a keeper. 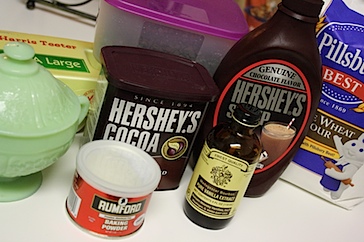 My sweet tooth always comes out after dinner. I crave something, anything sweet. It's a battle every night to not consume something sweet. The other day, I reeeeeeally wanted to make a batch of oatmeal chocolate chip cookies, but it was too late to make any, so I settled on nothing. My dessert stomach (the stomach reserved for all things sweet) was not happy. I started wondering if it was possible to make, perhaps, an individual oatmeal chocolate chip cookie? Could such a thing be possible? Well, it's not a cookie, but enter Jen's Individual Dark Chocolate Cake, which she so graciously shared on her blog, Maple N' Cornbread. Jen has featured her individual chocolate cake several times on her other blog, Glowing From Within.

Hubby and I were both wanting something sweet after dinner tonight, so I decided to give the recipe a go, even though I didn't have sour cream or yogurt. 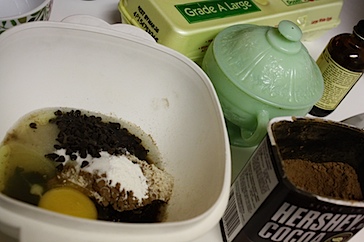 In desperate need of something chocolate-y, I decided to try subbing some canola oil for the sour cream/yogurt. I think it totally messed it up. That, or I overcooked it. 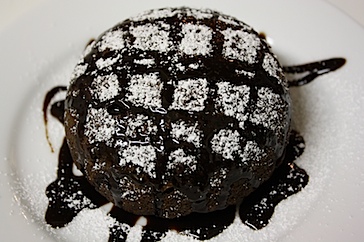 My cake came out dry. *sad face* The flavor was delicious, though! I will have to give the recipe another go. Next time, I'll use the real ingredients and maybe try shortening the cooking time. 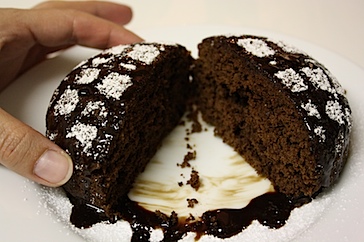 Dry or not, I still ate my half (hubby had the other half). It was sooo tasty (albeit dry) and totally satisfied my sweet tooth. Jen was sweet enough to run the calcs for me and this little baby is a mere 240 calories! Not too shabby, eh? I had to add extra calories into my daily count, though, since I used canola oil. Doh! 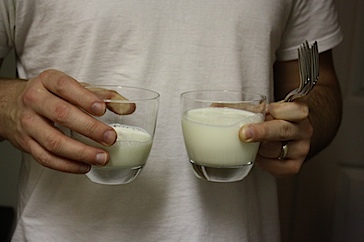 Hubby and I also had some milk with our chocolate goodness. We love milk with desserts! I made him pose as he was walking from the kitchen to the living room.

I didn't burn any calories since I didn't work out today. I totally went over again, but not too shabby considering 1 fast food meal and a decadent chocolate dessert! I think it's going to be awhile before I'm able to balance my foods and snacks calorie wise, but I'm getting there! 🙂