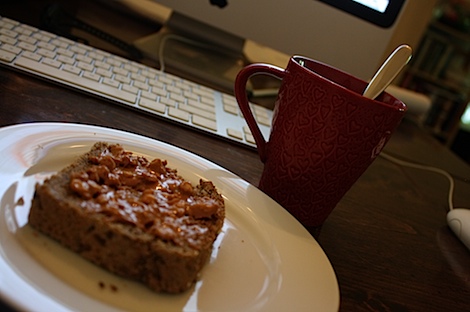 I spent a couple hours (yes hours!) in front of my computer this morning between blogging and researching a most-awesome blog-related idea I have in the works. I would love to tell you more now, but I’ll hold off for now. While researching, I enjoyed a nice cup of 1/2 TJ’s Bolivian Coffee and 1/2 Fresh Market Spring Blend with a slice of Great Harvest Flax Oat Bran toast with Barney Butter . 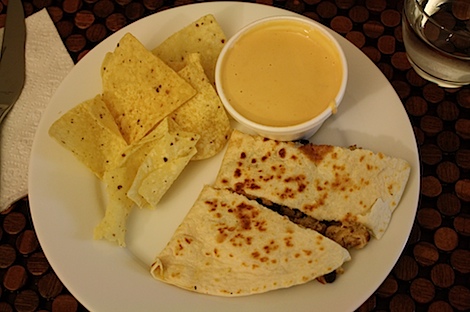 I don’t know why, but I had a craving for nice, salty, crunchy tortilla chips this afternoon. Hubby picked up Moe’s for us and we shared some chips + queso and a chicken quesadilla. I ended up eating only 1/4 of the quesadilla and an extra handful of chips. It was very enjoyable!

Hubby and I spent the afternoon wrapping up our purge of the apartment and though it looks about the same right now, our storage/laundry room looks 10 times better and we also were able to fill his entire trunk and some of his back seat with stuff to donate to Goodwill or Salvation Army. I have a hard time letting go of things, but it’s good to know that my stuff may help someone else out. 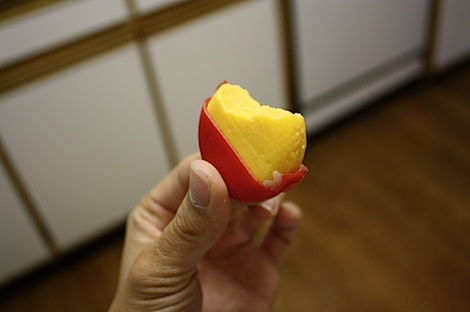 Later this afternoon, I had a hankering for a snack, so I grabbed a Cheddar flavored Babybel cheese… 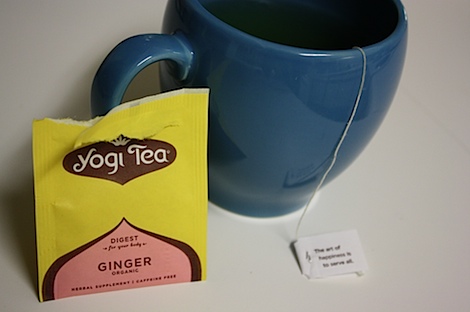 …and brewed some Yogi Tea Ginger Tea , which I sweetened with honey. 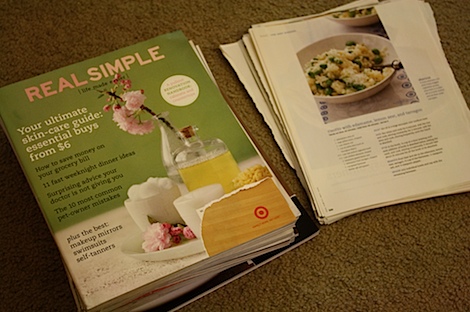 I decided to do a little more purging, but this time on my magazine collection. You see, I love magazines. I love to subscribe to them, read them, and keep them…for reference later, of course. Magazines can take up a lot of space, however, if you have enough of them. I recently heard on the de-clutter show neat a good tip by the host – sometimes you have to know when your inspiration is preventing you from being inspired.

I think that is exactly my current problem – I have so much stuff full of great ideas, recipes, and what-not, but I have so much that it’s overwhelming to go through it. I decided to tackle my Real Simple magazines by pulling all the recipes I wanted to keep. I pulled out many more recipes than I anticipated, but bottom line is I made more space on my bookshelves…yay! 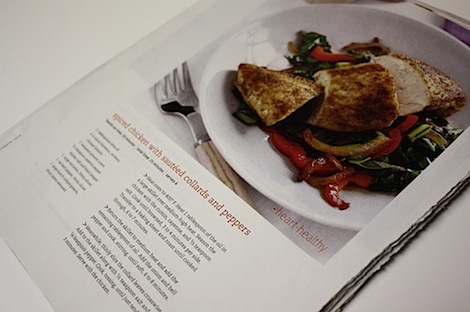 After staring at Real Simple recipes this afternoon, I decided to try out one of the recipes I saved. I had hubby review the pile and he selected the Spiced Chicken with Sauteed Collards and Peppers, which I had to adapt due to missing ingredients. 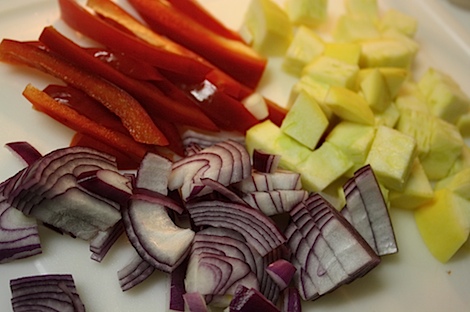 I subbed organic baby spinach for the original recipe’s collard greens and I also added some organic summer squash, since we had it on hand from last week’s organic produce delivery. 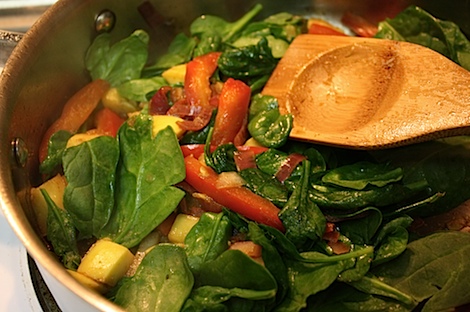 The veggies looked so colorful in the saute pan! 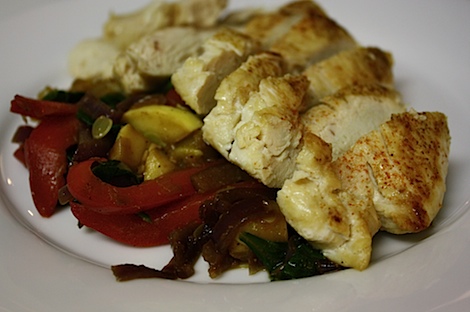 Dinner was so delicious and surprisingly filling. 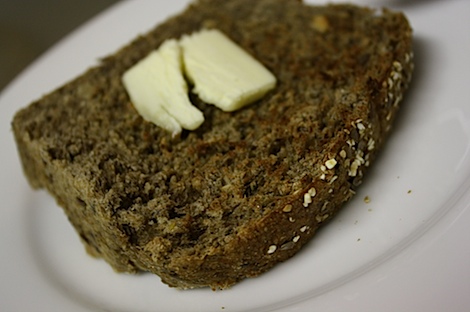 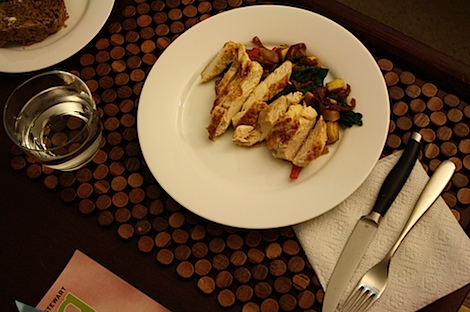 I enjoyed dinner with some water. I also only ended up eating about 1/2 of my 1/2 of the GHBC toast since everything was so filling.

Adapted from the Real Simple recipe 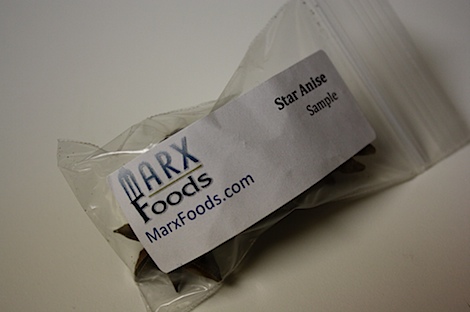 After dinner, I wanted something sweet to finish the day’s eats, so I decided to make a hot chocolate for dessert. 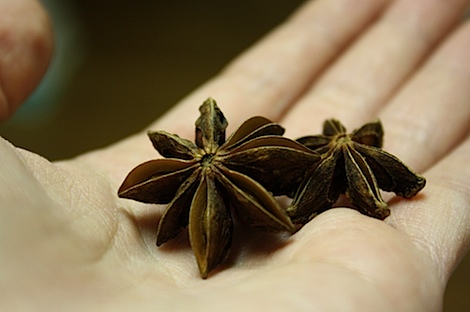 Another spice sample I received from the wonderful MarxFoods.com was Star Anise – a sampling from their bulk whole spice collection . 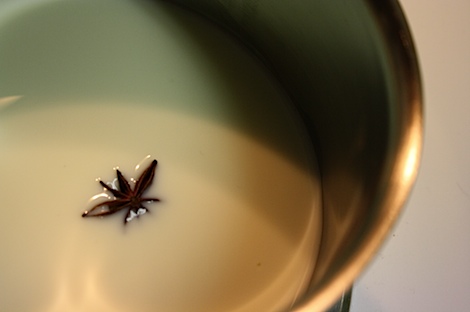 I decided to make some hot chocolate following this Ellie Krieger recipe, but I subbed a star anise for the cinnamon stick in the recipe to make more of a spiced hot chocolate. I also let the star anise steep for a couple minutes after the milk came to a boil in the pot (but I turned the heat off after the milk reached boiling temp). 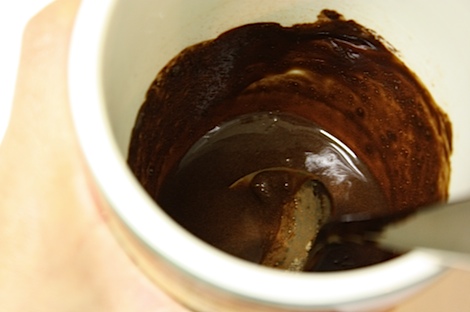 I also added a dash of cinnamon to the paste concoction part of the recipe. 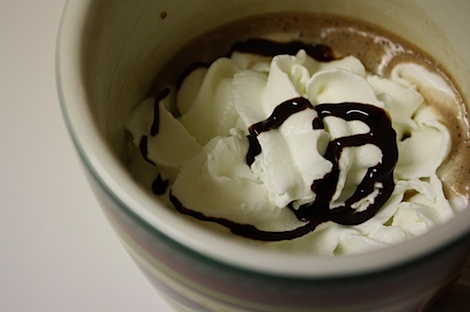 I topped my spiced hot chocolate with some whipped cream and a drizzle of Hershey’s chocolate syrup . So good! 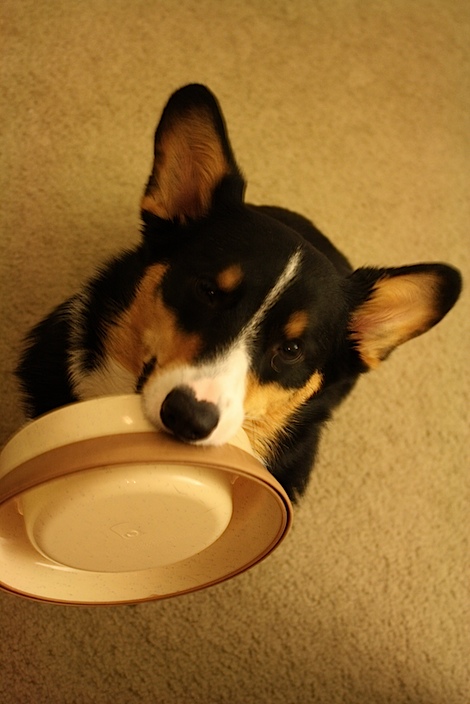 Meanwhile, Bailey has been carrying his food bowl all around the house. We’ve been trying to teach him to bring us his food bowl when he’s hungry, but I think it’s working too well, because he is always trying to give it to us now! 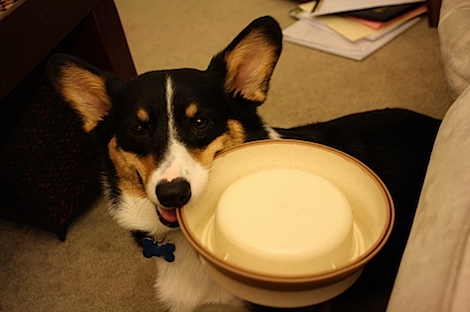 It’s so cute to see him bringing you the food bowl, but we are still minding his portions so we don’t over feed him.

Has any one seen the new Food TV show, Five Ingredient Fix ? It’s awesome! I love it! I tend to be a minimalist when it comes to cooking as I prefer recipes that don’t use too many ingredients (and hubby prefers to go grocery shopping for recipes with smaller ingredient lists). I can’t wait to see what else Claire Robinson comes up with. In fact, I need to go add this show to my DVR record-list! Have a great week everyone!