So much to cover and so sleepy already! I don’t know about you, but I’ve been staying up later and later it seems! I have plans to change this by getting organized and getting on schedule (yes, I’m planning a new challenge!) but in the meantime, I will suffer with lack of sleep. 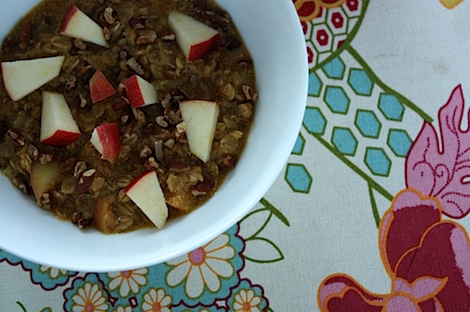 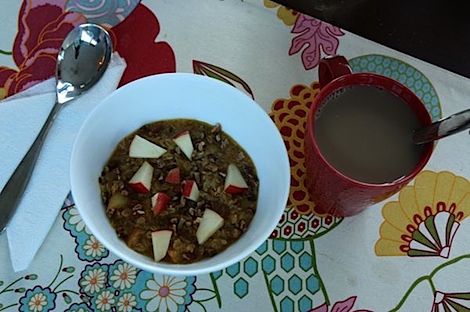 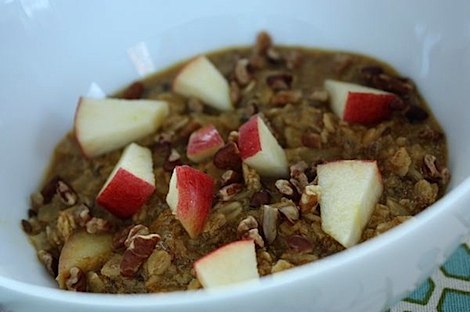 It was pretty good, but I’m still craving more of that coconut milk pumpkin oatmeal! Boy was it good! 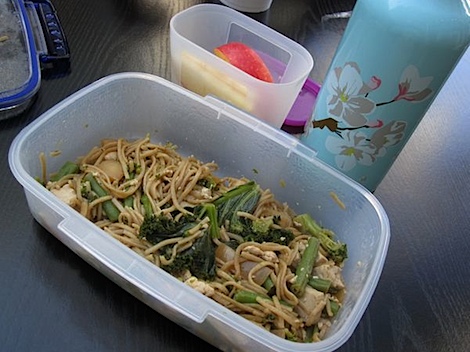 I escaped my desk for 15 minutes to grab a very quick lunch with a co-worker. I saw the sun! (my cubicle is not near a window and the windows seem to be tinted making it always feel a bit dark…which I dislike since I love natural sunlight so much). I had leftover 3, 2, 1 veggie soba noodles, apple (from breakfast) and water. 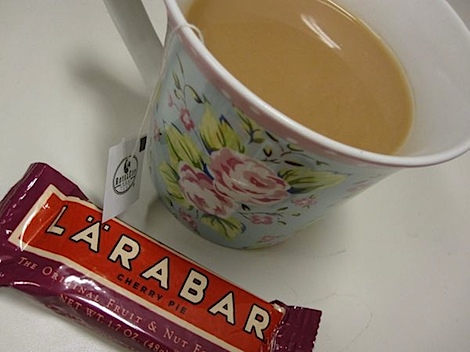 For an afternoon snack, I was craving a blueberry scone from Starbucks but thanks to Eat in Month, I just had a Cherry Pie Larabar with some hot black tea with cream and sugar. 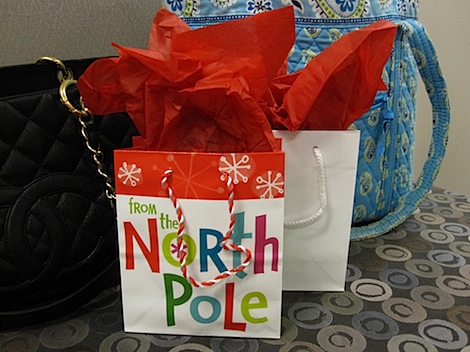 Post work, I played elf and passed out some last-minute Christmas gifts. Two down…two to go! 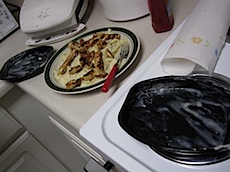 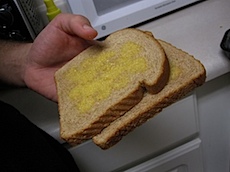 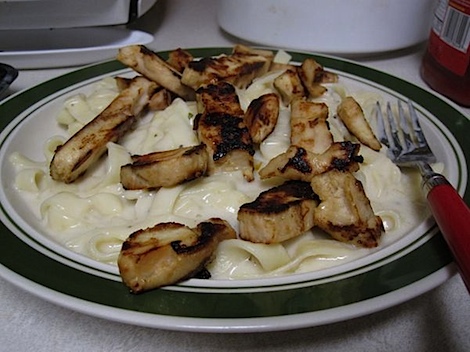 Post-gift-giving, hubby and I stopped by some friends’ apartment – hubby’s bachelor friends’ apt, that is. They were having a true bachelor dinner – 2 lean cuisines topped with some frozen grilled chicken with a side of toast with parkay. 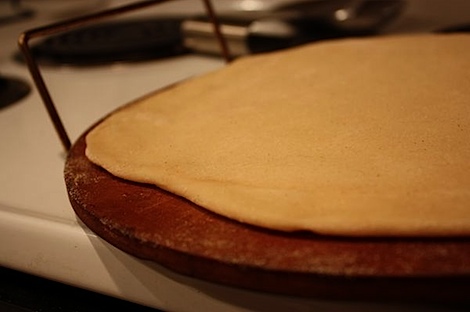 Meanwhile, I went home and prepared a pizza for me and hubby to enjoy. I got another pizza dough from Trader Joe’s (can’t beat 99 cents!) but I got the white dough this time. I love my whole grains but sometimes white is just better. I wanted to test the TJ’s doughs out to see.

Following a reader tip by Biz of Biggest Diabetic Loser, I pre-baked my crust for 5 minutes (I just did it at 350 though since that was the baking temp of the pizza). The tip worked pretty well but probably would have been better if I had followed the complete tip which was to pre-bake the crust for 6 minutes at 425. Thanks for the tip Biz! 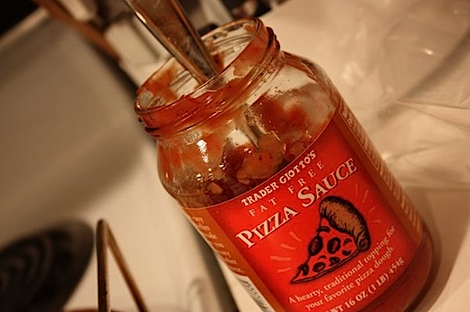 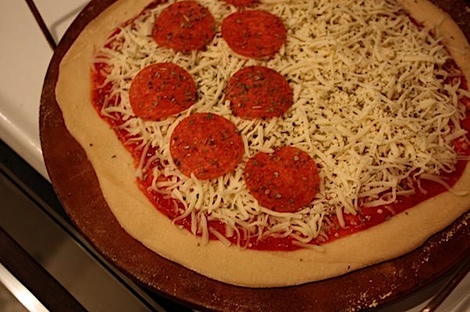 I did our usual toppings – 1/2 cheese and 1/2 pepperoni with pizza seasonings. I added a bit of parmesan to the cheese this time since we had some in the fridge. 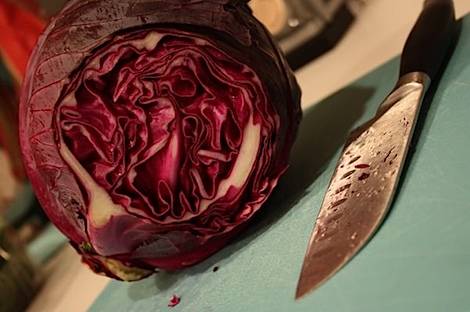 I prepped a salad for me and hubby so we could get a good veggie serving (or two). 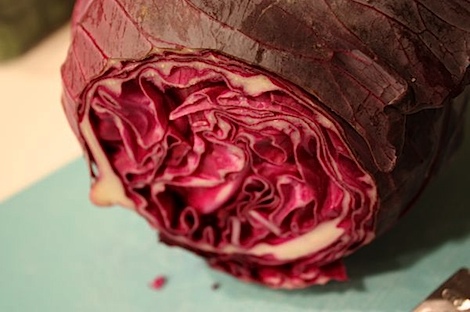 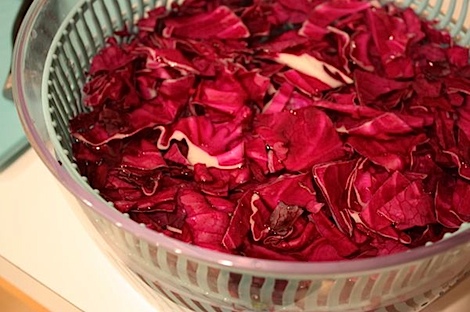 I think purple cabbage is so pretty. 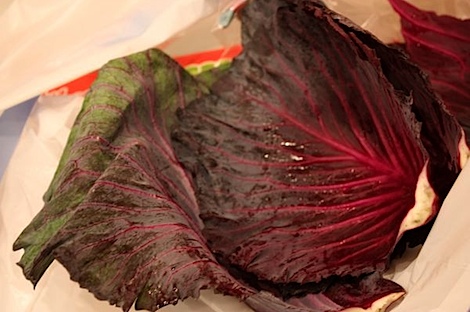 This discarded leaf in my garbage bag (gotta start that compost!) even looks pretty – the way it goes from vibrant purple to green. 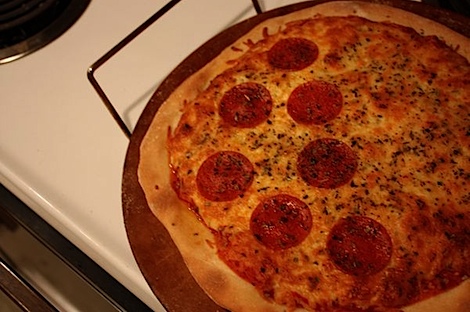 The pizza was done in a snap. 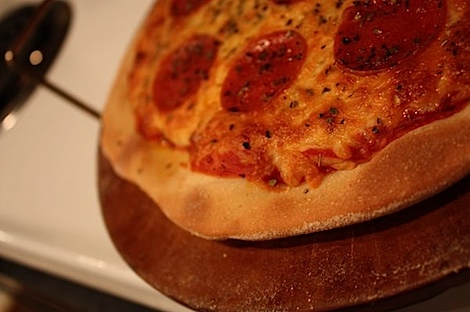 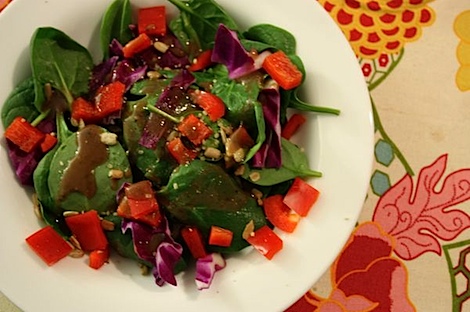 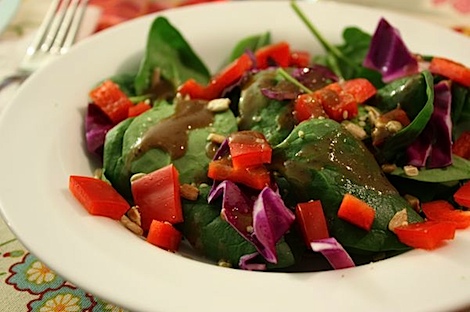 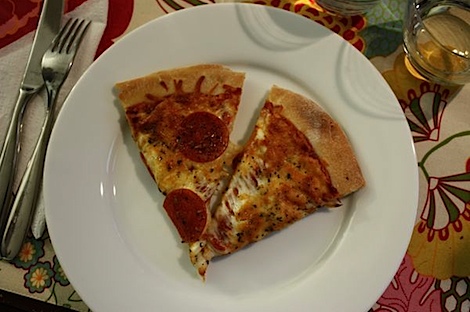 I started with a slice of pepperoni and cheese, each. 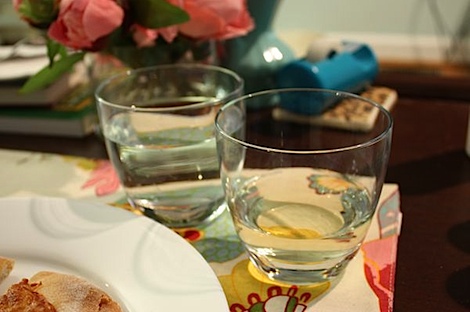 We had a little vino with dinner. 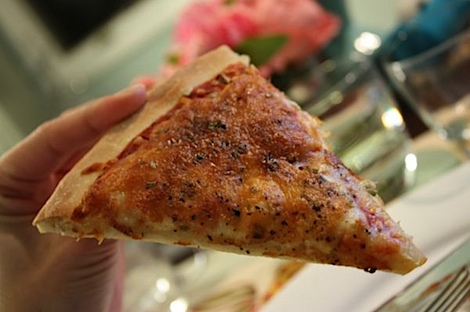 Seconds – another slice of cheese. 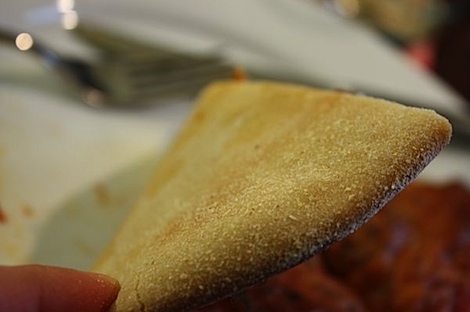 I think the secret to getting that from-your-local-pizza-place taste is the cornmeal on the bottom. I spread cornmeal thinly over my pizza stone and it gave the crust a nice texture and helped prevent it from sticking to the stone. 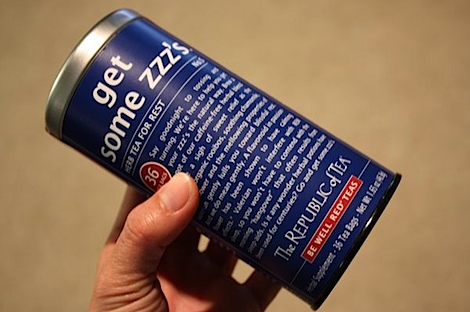 As part of my plan to get on a regular schedule, I’d like to start going to bed and waking up earlier. I know I’ve declared the desire to do this before, but I didn’t really make a concerted effort. I’m hoping to do better this time around. And, I’m hoping this Get Some zzz’s Tea from The Republic of Tea will help. It was a little expensive and I’m not sure if it will actually work, but even if it’s mind over matter and works like a placebo, I don’t care as long as it gets me in bed and asleep faster!

Secret fabric post revealed tomorrow and a giveaway for my DSLR friends!