Most of you know that I gave up meat for Lent this year. But all who participate in Lent must also give up meat every Friday of Lent. With so many going meatless on Fridays, I thought I’d pull together a collection of guest posts with some great meatless food ideas. I thought I’d take it a step further to not only get vegetarian ideas, but some pescatarian and vegan ones, too! If you’re participating in Lent, why not try a vegan dish or two for your meatless days? They’re tasty and fun. 🙂

While reading the latest (February 2009) issue of Vegetarian Times magazine, I stumbled upon a recipe for White Chocolate Blondie Bites – I immediately thought to myself, “How perfectly tantalizing do those sound??” and proceeded to bookmark the recipe.

Wait, no check. I was extremely unpleased to discover that I did not have shredded coconut on-hand (grr!!) – what was I to do about this??

After much thought, I finally came up with a fun, slightly-daring substitute for the shredded coconut: I used a Coconut Cream Pie flavor Larabar instead!! Oh yes, I really did.

Once I gathered all of the necessary ingredients, I set off to my kitchen in order to veganize and “gluten-free-ize” the original recipe.

By the end of my baking adventure, I had created a batch of… 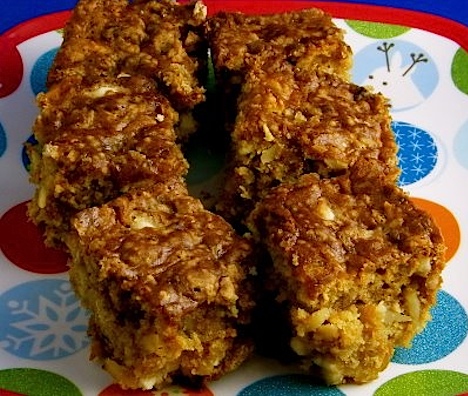 …White Chocolate-Coconut-Almond Blondies. These chewy, luscious, dense blondies were bursting with flavor – especially from the rich white chocolate chips, tender almond slices, and chunks of the Coconut Cream Pie Larabar. Pure bliss in an 8″x8″ pan, if you ask me.

And now for the “taste-tester” reviews:

My parents simply declared that these blondies “must be made again – they are by far the best batch yet!!”; and here is what The Co-Worker thought:

**Here is The Co-Worker’s official review of the White Chocolate-Coconut-Almond Blondies**:

It tastes like all of the prior mentioned “blondie treats.” It doesn’t weigh you down with too much sweetness.

It’s a light, fluffy treat… that you could enjoy with morning coffee, as dessert after a fine meal, or as an afternoon pick me up.

I loved the coconut which really was the exclamation point to a wonderful treat!”

Since these blondies were obviously quite favorable among my “taste-testers” and myself, I feel that the recipe is “share-worthy” – so here you go!! Please let me know what you think/if you try it!!:

In the same bowl, add in the flour, baking soda, white chocolate chips, sliced/slivered almonds, and Larabar chunks. As the mixture starts to thicken up/combine, add as much nondairy “milk” as you need (but not too much) so that the batter is mixable.

Bake for about 32-35 minutes, until a toothpick inserted in the center of the blondies comes out clean.

**Note: If you happen to have shredded coconut on-hand, then feel free to substitute that for the Coconut Cream Pie Larabar.

Considering how much I adore blondies, I really must continue to emphasize just how significant it is that this batch was labeled as “the best one yet.”

Check back for more M4L Guest Posts coming at you for Lent. 🙂