This weekend was such a whirlwind!

After the masquerade party, I stayed up till 1am. Then, I woke up promptly at 7am for a 5 hour Zumba Instructor workshop with my company. Phew! I was pretty zonked after that and promptly re-heated some frozen soup and made toast for a quick lunch. Hubby reminded me via text that our neighbors were having a birthday party, so I went there. Then, I came home, had a quick dinner, and got ready to go out again! I went to a dueling piano bar with some friends to celebrate my friend Megan’s first day of school! She’s getting a second degree, and I’m super proud of her. Happy School Megan! 🙂 Anywho, I stayed up again till about 1am. For whatever reason, I woke up early-ish on Sunday (around 8:30am)…maybe it was Bailey licking my hand? lol I barely had time to make breakfast and get ready for the day before it was time to head out to teach Zumba. I stayed after to work on choreography with some friends from class. Then, it was time to meet another Zumba co-worker to do paperwork. And that brought me to dinner time. After dinner, I finally had the chance to blog my masquerade party post before it was time for bed. Thank goodness I had Monday off from work, because after this weekend, I seriously needed to re-charge. I slept in till 10am! That’s how I know I’m really exhausted…sleeping in that late. Phew!

Anywho, I was off from work today to celebrate Martin Luther King, Jr. Day. In honor of MLK, here’s a great quote by him: 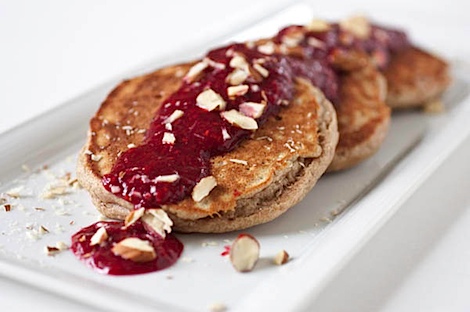 Since I had some time this morning, I decided to make my multigrain pancakes and raspberry sauce (click for recipes). 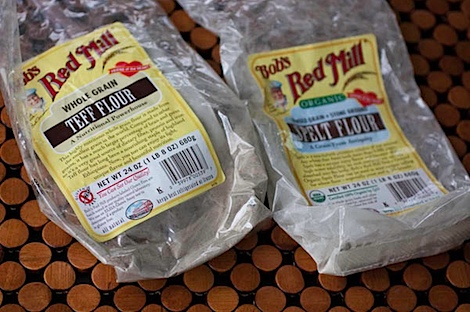 I had 2 bags of flours (teff and spelt) that were almost empty and decided to throw them into the pancake mix. They were extra-multi-grain. lol 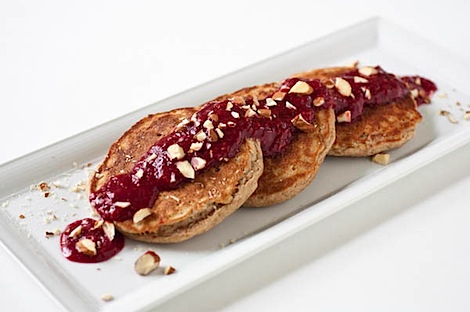 They were also fabulous! 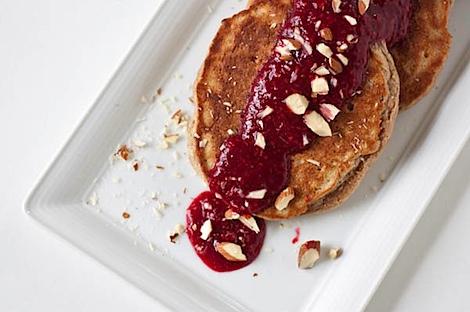 I added chopped almonds on top for extra texture. 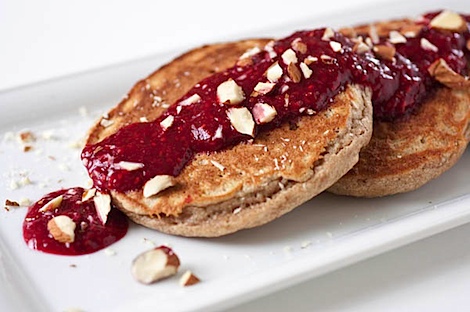 Ooh and I tried making the sauce sans lemon to see how it turned out. It was pretty good, but I liked the tang of the lemon juice in the sauce. 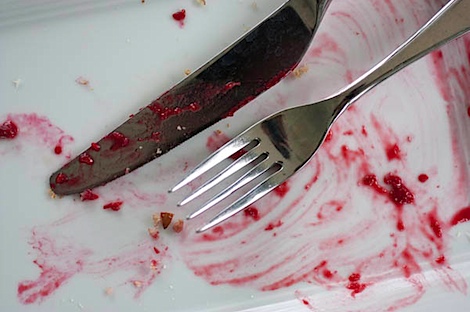 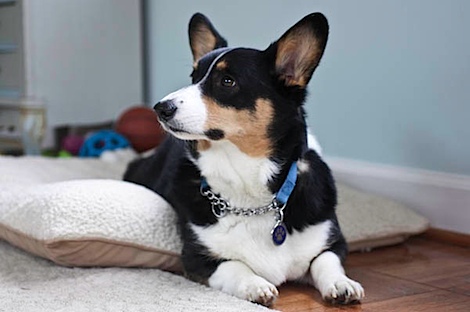 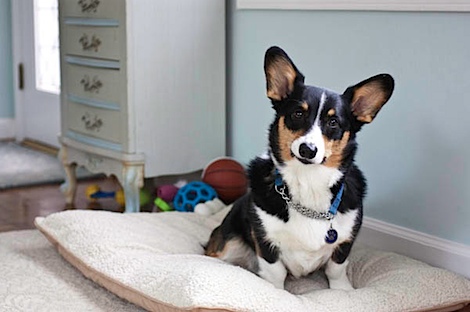 I worked hard to get a head-tilt photo for you guys. lol. 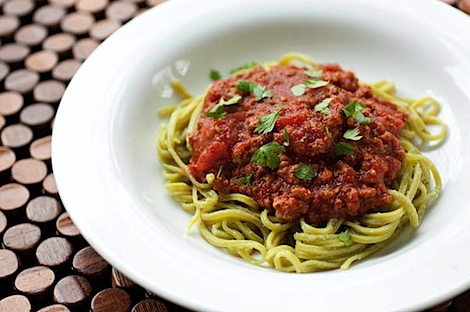 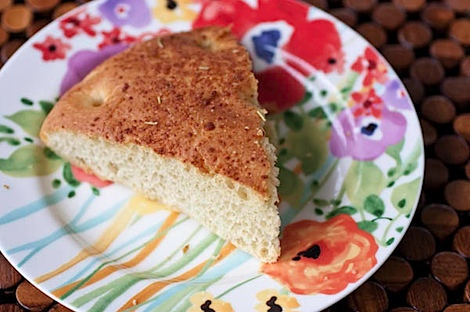 Hubby bought some focaccia at the same place where we got the pasta. I didn’t have time on Sunday to make focaccia from scratch, even though you guys know I luuurve to make it! 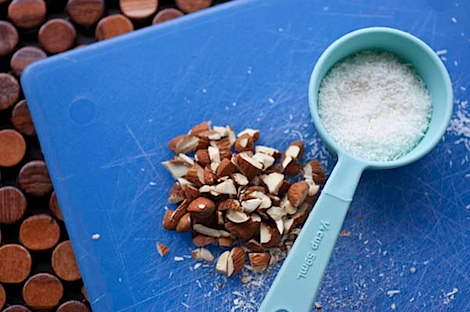 Since I had the afternoon off, even though I was spending most of the day relaxing and re-charging, I decided on doing some baking. 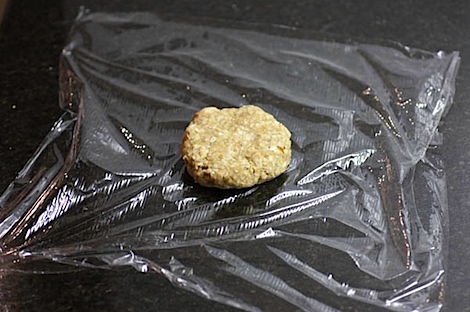 I’m also working on a new recipe for you guys! 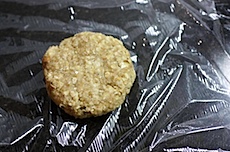 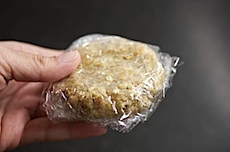 An instant, no-bake granola bar for one!

If you’re like me, you like homemade granola bars, but don’t like how it makes such a big batch, or such a mess, or takes so long. I’m hoping this will be a winner. 🙂 It doesn’t quite have the same rich taste as a baked bar, but it’s also a fraction of the effort. 😉

Even though I was being lazy work-wise all day, I wanted to stay on track fitness-wise. I went to Zumba tonight and had such a good time. At the Master Class with our new ZES, we saw a new dance for How Low Can You Go. The instructor did it tonight and though I liked it the first time I saw it, I reeeally liked it the second. I gotta get the song so I can do it in my class soon! It was so F-U-N! 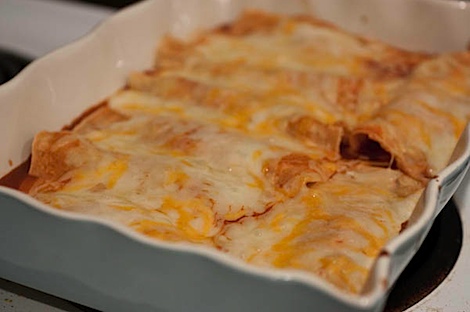 For some reason, I decided to make homemade enchiladas for dinner. Not sure why. The recipe looked really easy and though it was, it wasn’t a weeknight-post-zumba kind of dinner. I should have stuck with something faster. lol. 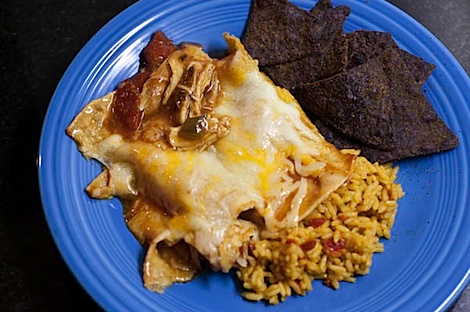 Oh well, it was still delicious. We had Spanish rice pilaf and some spicy blue corn chips. 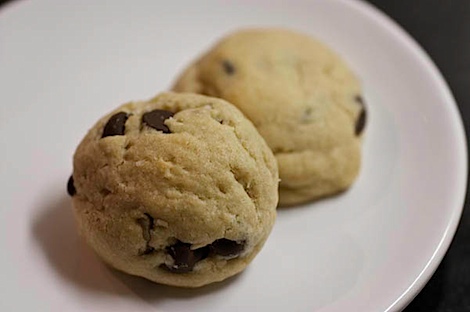 And I got to try my baking experiment – a new dough ball flavor – Chocolate Coconut Almond. Nommmy nom! The recipe needs tweaking before I post it, but it’s gooooood!

Thank goodness I had today off to relax and re-charge. Sometimes I feel like I get so crazy-busy during the week, I need the weekend down time to get back to normal. lol Know what I mean?

Do you use the weekends to relax and re-charge? Do you build time in during the week?