After Thursday and Friday of Zumba Convention 2012 went so fabulously, I was really looking forward to the second half. 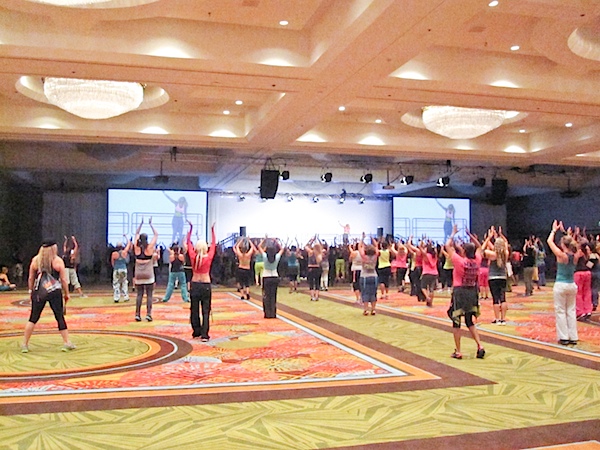 I kicked off Saturday morning with a 90 minute Miami Party master class with Heidy, who I’d first seen at the Caribbean Heat session of last year’s conference. 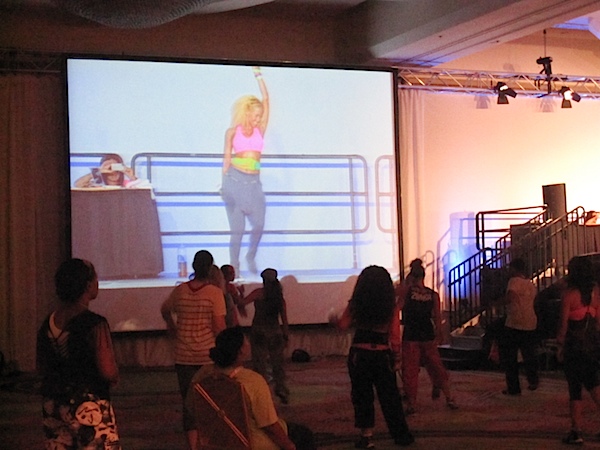 Heidy’s class was so fun and had a great mix of songs. She posted her playlist on her Facebook page here if you’d like to see. I loved that she did some LMFAO and J Lo, but the surprise song I loved the most was Shots. Holla! 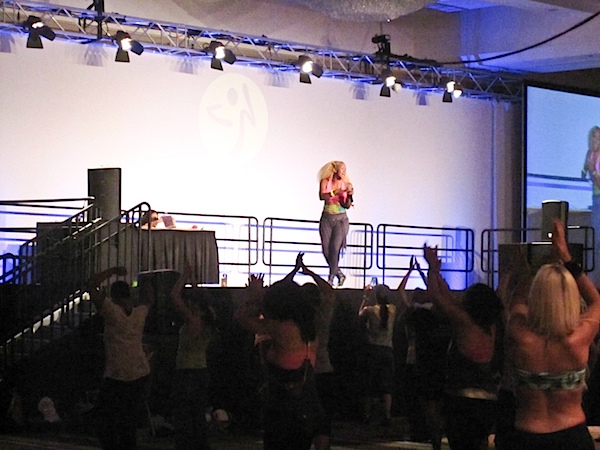 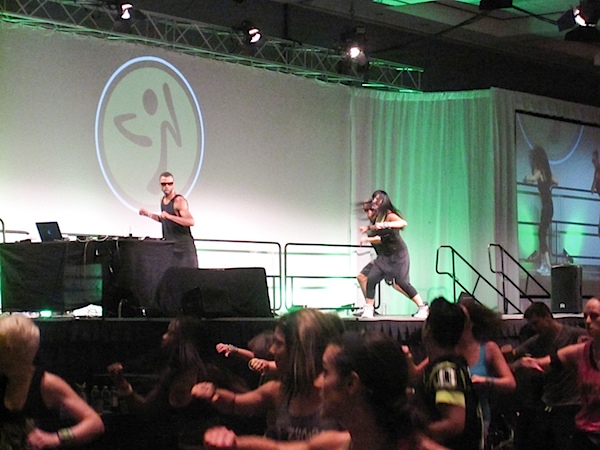 My next session was Latin Pop with Lindsey and the waackers. 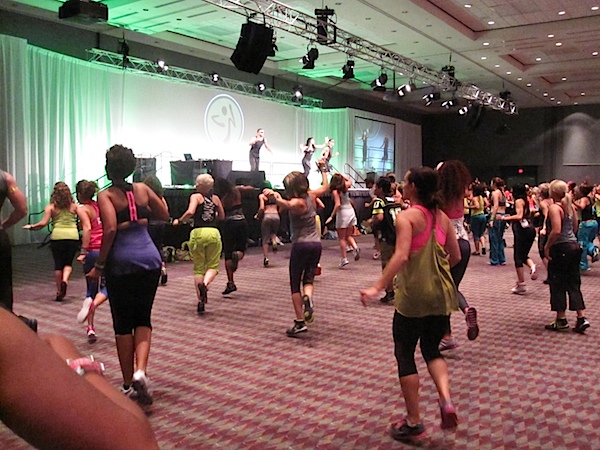 We learned about waacking and vogueing and how to apply related moves into popular pop songs. I loved Lindsey’s song choices and had a lot of fun with the different types of moves. We started with the breakdowns and did the master class last. I think this is my favorite approach to sessions so I know what moves I’m doing when we’re doing the dances – both by actual movement and by name. 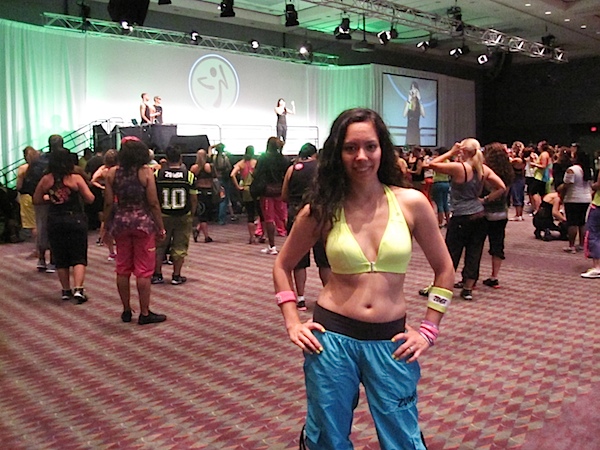 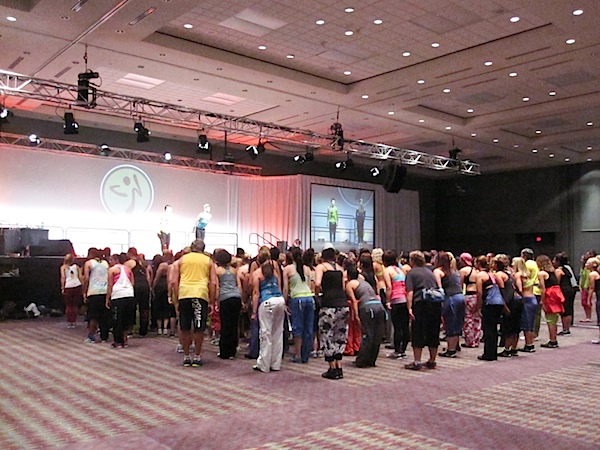 And for my last session of the day, I did the Hip Hop session with George and Michael. 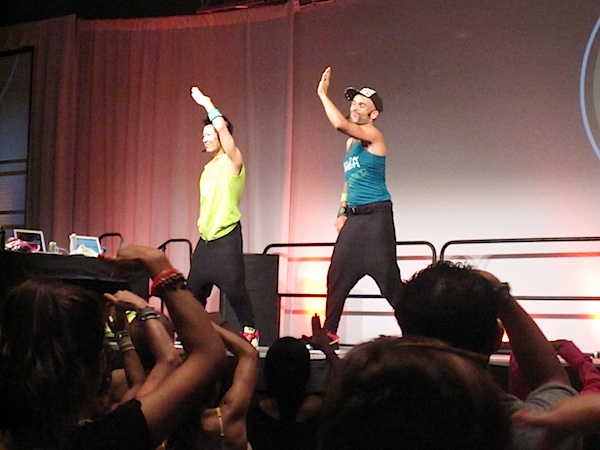 Hip hop isn’t one of my strong areas of dancing, but I had fun trying anyways. The hardest part for me of this session was just learning the choreography. We learned little sections of routines, 8 count by 8 count. Then, we repeated them throughout the session and in a couple different songs. I enjoyed the repetition since it made it easier for me to remember. hehe 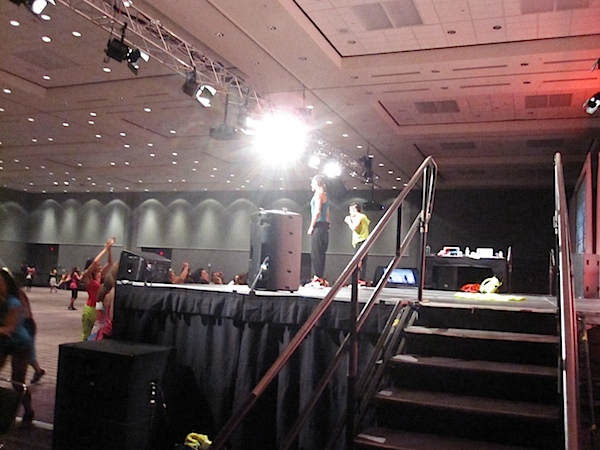 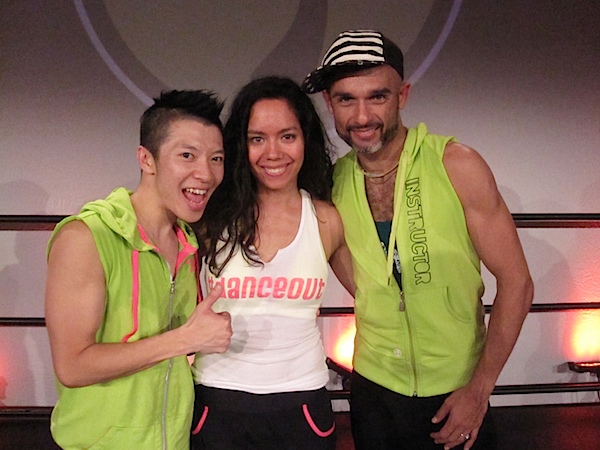 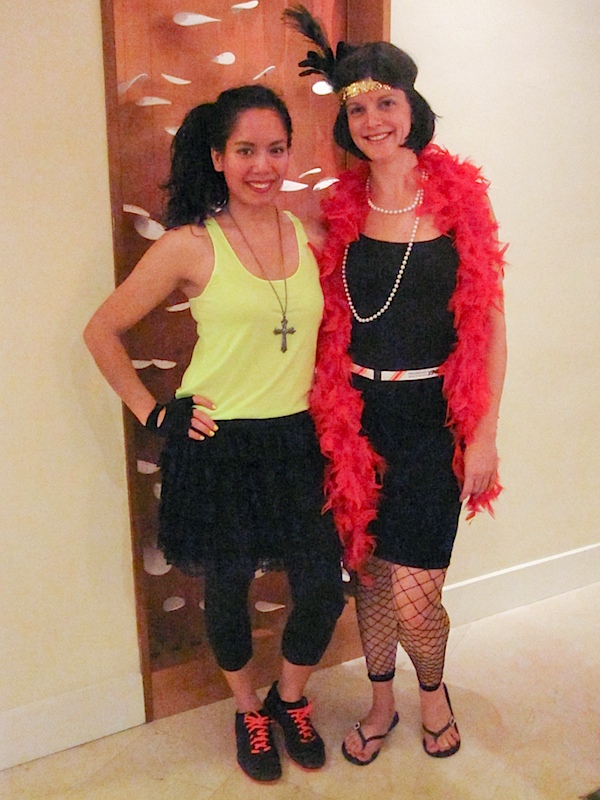 After my longest day of sessions (3 in 1!), we had one more event to go – the Partying through the Decades night. I went as a standard 80’s girl and my friend Sarah went as a flapper. Which decade would you dress up as if you went to this party? 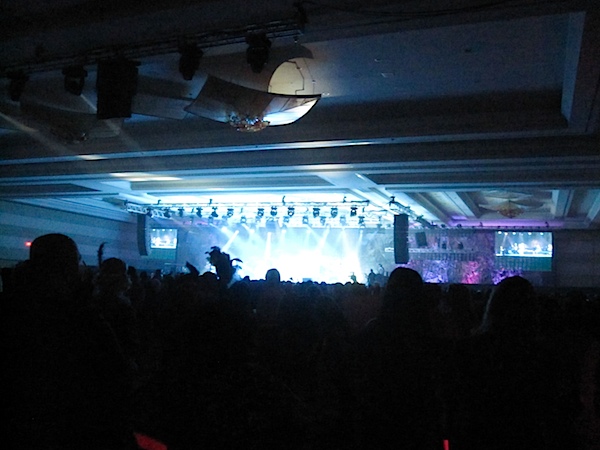 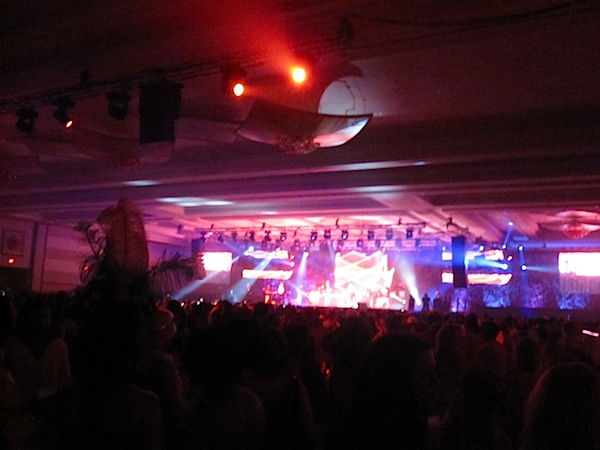 By Sunday, I was pretty tired and forgot to take the battery out of its charger and put it back into the camera…so, I have no photos from the last day of convention.

I started my last day with a favorite from last year – Caribbean Heat! I was a little worried about doing the same session twice, but it was so worth it. I had a hard time remembering most of the moves from last year, so it was a good refresher for the Caribbean Heat moves. Not to mention, it was just fun dancing with the Z305 crew again – they are so talented! I really liked how they do the master class, break downs, and then break everyone into groups to perform some of the moves as they call them out. It really helped me commit some of the moves to memory because they’d call out a move name and the group had to do it. Pairing the moves with the names can be difficult for me since we learn so much in that session, as well as, over the whole weekend.

After Caribbean Heat, I came around to the idea that I had a small window of time to get back to the hotel before check out. We got our check out extended to 1pm, but my session ended at noon. So, I had from noon to 1pm to run by the Zumba shop (to get goodies for my class helpers back home), get to my hotel, take a quick shower, change, and finish packing. Remember that white mile reference the other day? Yea, my session was about 1 mile from my hotel room…it wasn’t looking like I was going to make it on time. Ruh roh.

Just as I realized that I was in pretty big trouble trying to get all these things accomplished, a few girls asked me to take their picture. I quickly snapped their photo, but the actual shutter was on some kind of delay because it took the photo just after I thought it had, so I was moving a little when it went off. I looked at the preview and said the photo looked pretty good, which it did, and then promptly rushed off to get through the next hour of madness. I couldn’t stop thinking about how I wish I would have asked those girls if the photo was okay to them. I was in panic mode, so I was starting to rush around, but it wouldn’t have hurt to take an extra minute or two to ask. Fail on my part. 🙁 Dear girls, in the unlikely event that you’re reading this – I apologize for being so hasty.

Anywho, just after taking the girls’ photo, I realized that in order to make check out, I’d literally have to start running. So, I did. I ran to the Zumba shop, grabbed the gifts I knew I wanted to get (headbands – since I’d already gotten bracelets earlier), checked out, and ran from the Peabody to the Convention Center where I saw some of my friends. After 4 days of Zumba Convention sessions, the running was quickly catching up to me. I walked (quickly) back to the hotel with my friends and raced through my to-dos. Shower – check! Change outfit – check! Pack – check!

After all of that, I still had 1 session left – Be an Inspiration with Steve.

I showed up in jeggings, a t-shirt, and tennis shoes without realizing that there would actually be a master class. Oops. I thought the whole session would be a presentation, but there was a 1 hour master class followed by 1 hour of lecture. I decided to sit it out in the back, which was sad because Steve’s class looked like a lot of fun.

As for the presentation, it was one of my favorites. Steve was very funny and engaging, and I really liked what he had to say. He talked about Sliding Doors, which is a movie about how small decisions/events can impact our whole lives. He asked us to think about who inspired us to start teaching Zumba (our sliding door) and how it has impacted our lives. Then, he told us that we could be sliding doors for other people. Whoa. Pretty deep, right?

One of my favorite parts of the session was how you shouldn’t, as an instructor, dwell on negativity in your class. We’ve all had them, right? The person who stands in the back of the room seemingly bored by your class or apparently talking smack with another participant. Steve explained a story about a participant he thought was doing this once and how when he spoke with her, he actually found out that she wasn’t dancing because she had an injury. The woman explained that she thought he was an awesome instructor, so she came to his class anyways despite her injury just so she could dance with him – even if just for a little bit.. There was more to the story, but that’s the basic gist. Don’t let 1 negative person impact your whole class. You don’t know what’s going on with that person – they probably don’t even know that what they’re doing can be a signal to you of anything negative. And anyways, it’s not worth it to let 1 person ruin your confidence and your energy for all the other people in your class.

The rest of the day was quite stormy, which made me nervous for the flight home. Surprisingly, we left on time and the flight was pretty smooth despite all the storms I kept hearing about on the news, etc., which made me very happy. I sat next to a guy who just got done doing a talent convention for actors and models. I’m thinking I may see him on TV or in a movie one day. How cool would that be?

Well, another successful convention down! And, have you heard the news? They’re going to start doing East and West coast conventions? I’m going to have to think hard about whether I’d go to convention in LA, too. I’d love to do convention twice a year, but I’m not sure if it will work out with limited vacation days and money available. We’ll see!