Zumba Convention 2014 was off to a great start with one day down and three to go! 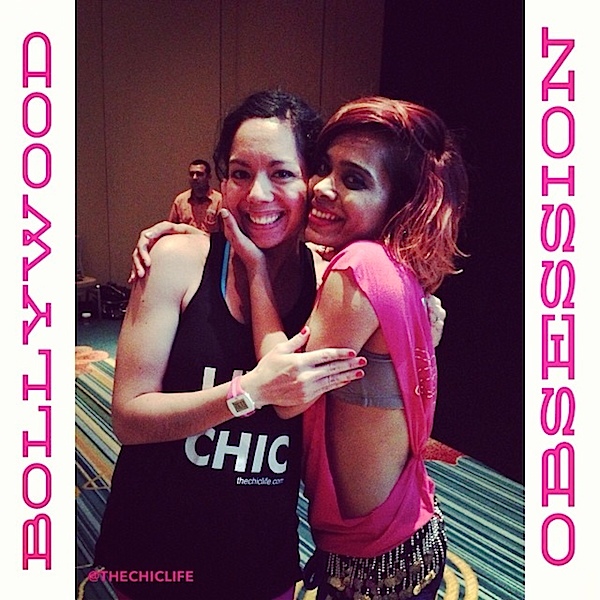 On the agenda for Friday:

Don’t let the long breaks in between the sessions fool you. I’m always surprised at how little time I feel that I have at convention. It seems like I’m always running around from one place to the next. This may be because I usually stay at the Hilton and most of my classes always seem to end up being at the Hyatt. The “white mile” isn’t really a full mile, though it’s closer to it than you may think. It can take awhile to make it from one side of convention to the other, not to mention factoring in time to eat, change, shower…whatever you’re trying to take care of in between sessions. Phew! But, this is still my favorite event of the year. Though it’s quite busy, it’s all for a great purpose since you get to dance, laugh, learn, smile, and dance some more! 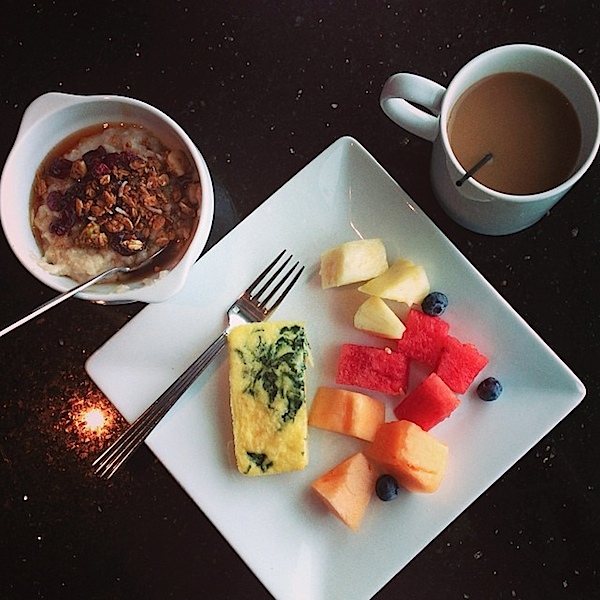 I love to fuel up at the Hilton’s breakfast bar. They switch out a couple different things on the bar every day, but I’m thankful for healthy staples like steel cut oats and fresh fruit. On Friday of Zumba Convention, they also had a yummy spinach frittata. 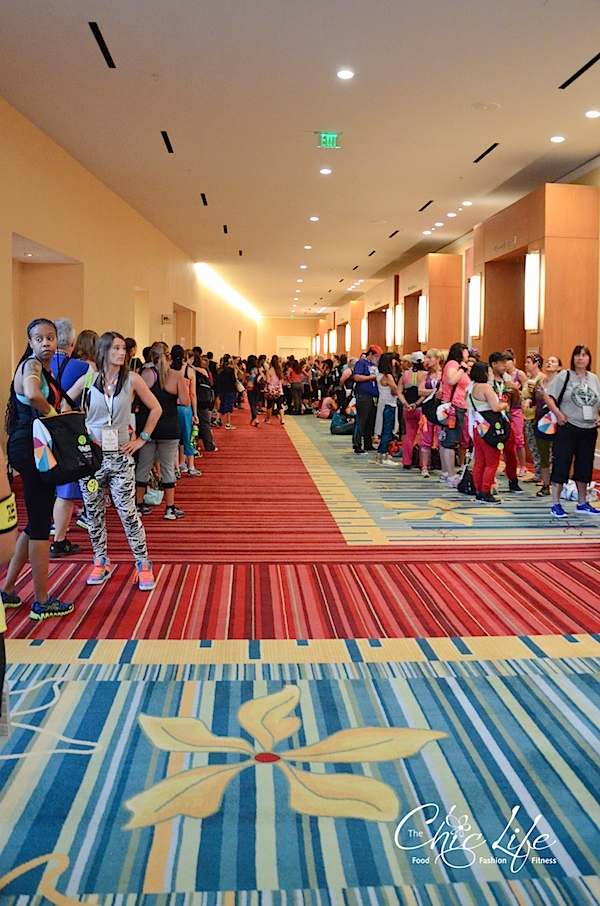 Lucky for me, my first session was at the Hilton, so I didn’t have far to go. The lines were crazy long, though!

My first session of the day was Bollywood Obsession. 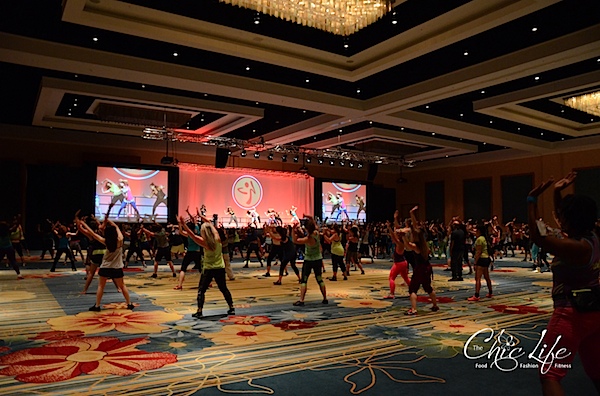 This is another one of my all-time faves. This was actually my fourth year in a row attending a Bollywood session, though this year was with a new presenter, Sucheta Pal. Sucheta was a bundle of energy and led a great session. In the past, the Bollywood session also included a bhangra breakdown, but this one was all Bollywood. 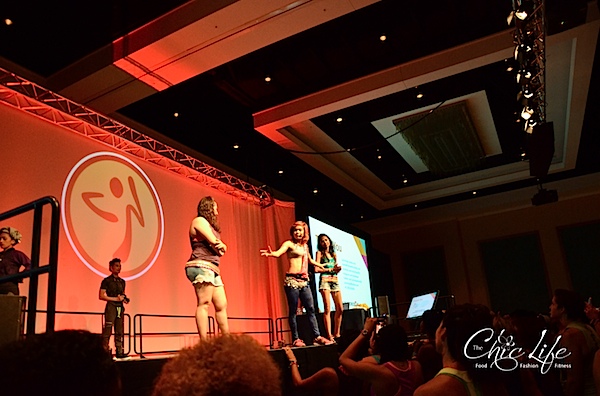 Sucheta did a master class, mini history session, and choreo breakdown. The songs were super fun, though I’ll have to adapt them a little for class back home. My favorite was London Thumakda, which she taught with cute and memorable names for the moves. Sucheta also creatively turned the choreo breakdown into an ice breaker game where you paired up with another person in the room. The moves were great (fun and playful), we just try to limit the number of move groups to an average of 3-4 per song and do things symmetrical. I kind of liked seeing all the different moves for me as a participant. Instructor-me also liked all the moves so I have more ideas for future songs in case I ever try to choreograph another Bollywood song.

I once watched an Indian wedding dance video to choreograph Desi Girl so the moves stayed true to the Bollywood style, and it took forever! I loved that project, though, and would enjoy trying my hand at a couple more. 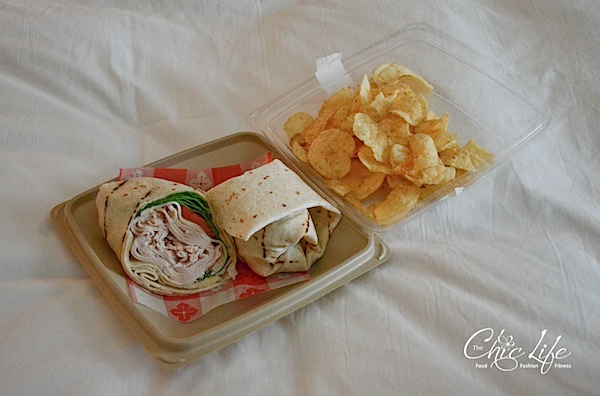 I had half a turkey wrap and some chips back at the hotel before hitting up the Zumbawear store on my way to my next session. Would you believe I had to wait to get in and to pay? I got what I went in there for (gold shoes!), but it made me late for my next session. This year, the discount store was combined with the regular store. I wish they would separate them because I think combining them made the lines extra long. I love seeing all the new gear every convention. This year, since I’ve purchased a lot of The Chic Life apparel, I decided to dial back on the Zumbawear shopping. 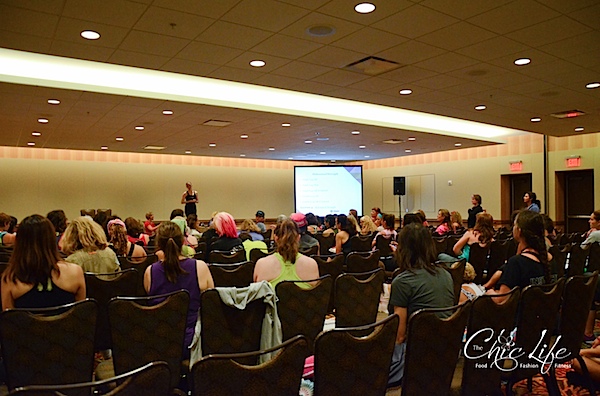 I was really looking forward to my middle session: Rockettes Tested Prevention with Passion. As someone who has experienced injuries in the past, I can tell you one thing: being on the bench sucks. Injuries are no fun. 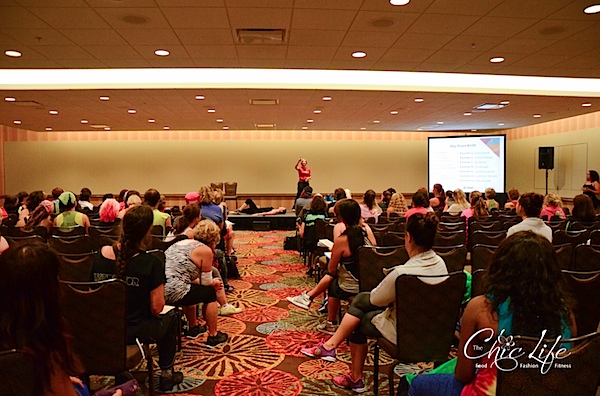 Elaine Winslow, Health Athletic Trainer and Director of Wellness for the Rockettes, and current-Rockette Bailey led us in a session talking about common injuries and how to prevent them with strengthening exercises. We also covered some easy warm up moves (like Elaine’s 5 minute, do-anywhere warm-up) you can do before teaching your Zumba classes.

I was really impressed with how detailed-oriented this session was. Elaine had some volunteers come up to the front of the room to show some strengthening moves and walked them through how to successfully complete the moves. It was all about the detail. From far away, it may look like the volunteer was barely moving, but Elaine talked them through small yet challenging things like keeping their abs engaged while slowly lifting their free leg. The precision of movement reminded me of my old ice skating days and made me want to train. Elaine – want to come to North Carolina? 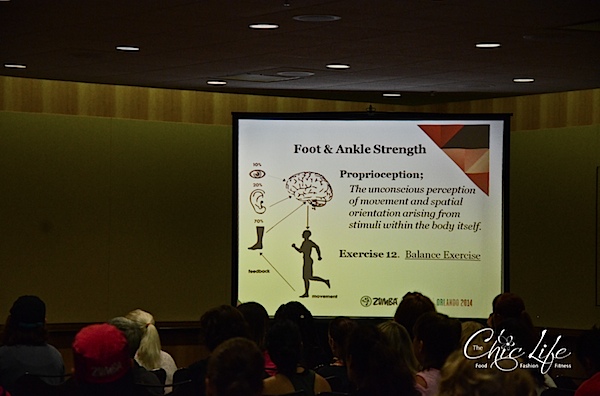 Maybe I just liked this session because I had a spotlight moment? Towards the end, Elaine went over proprioception (which we actually discussed during POUND training!) and then we did Exercise 12: Balance Exercise. Elaine asked the whole room to stand up and participate in this one. The exercise was simple: choose your strongest ankle, stand on the respective foot, lift the other foot and close your eyes. Balance on one foot for as long as possible. If your lifted foot touches the ground, quietly sit down.

I stood on my left foot, lifted my right foot, and closed my eyes. I had been standing at the back of the room so I could easily move around and stand up to see the demos, etc. so I had plenty of room in the back. I was a little wobbly here and there but stayed strong for a long time. Elaine encouraged the room, saying, “Stay with me…just a little longer…stay with me…” Finally, she said, “Okay, look up.” I was surprised to see almost everyone in the room sitting down. Elaine counted those of us still standing and I was one of five. Woohoo! Thank you strong ankle and years of balancing on one foot and thin blades from figure skating! 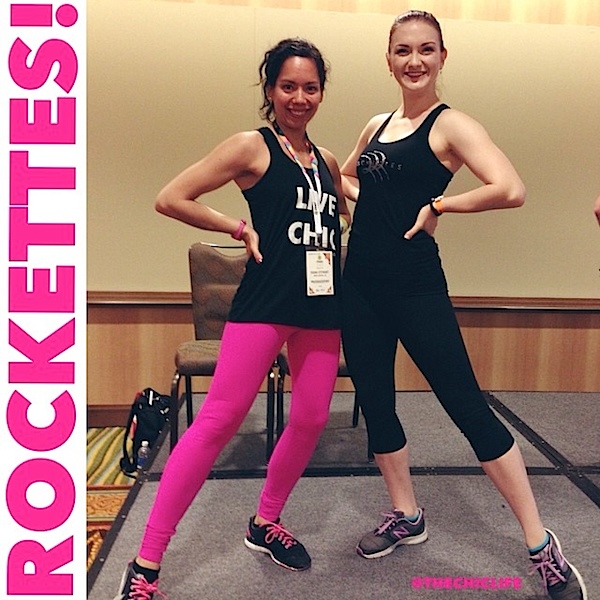 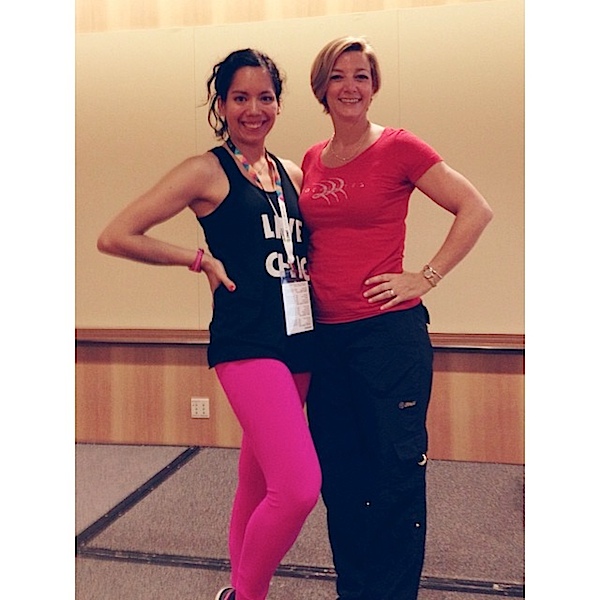 Thank you Elaine and Bailey for the very informative session! Looks like you guys may offer Rockettes fitness classes to the public? Maybe I’ll come work out with you guys if I’m in the area! Till then, I have some great warm-ups and exercises to practice! 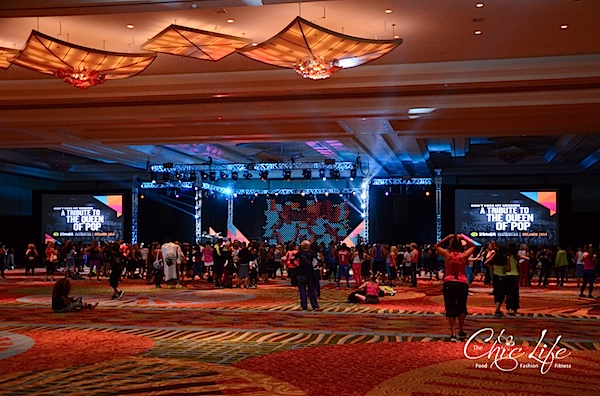 With only one and a half hours in between my second and third sessions of the day, I decided to stay at the Hyatt. 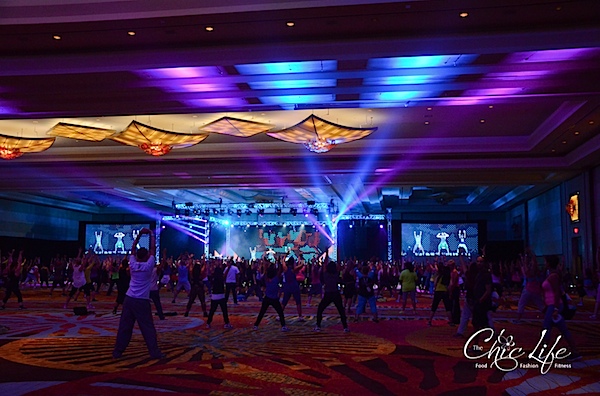 I had another tribute session to do – A Tribute to the Queen of Pop with Steve Boedt. This session was very similar to the King of Pop session, except this one had even less presentation. It was like a giant Madonna dance party. Oh yea! Similar to yesterday, Steve had some unique mixes and even pulled some songs from concert performances. My favorite song was a remix of Like a Prayer. I had a great time getting lost in the music and dance moves. Can I do this every week? 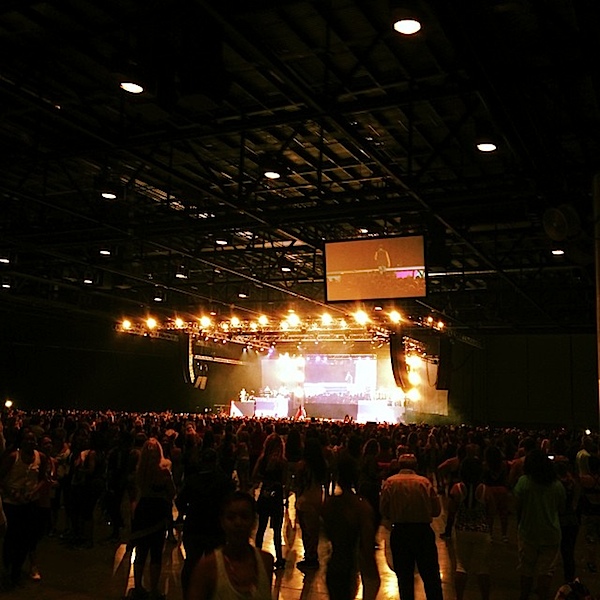 After dinner at the pool, we headed to the Fitness Concert. I was feeling the burn from day one, but I really wanted to attend the Fitness Concert because one of my favorite Reggaeton artists was performing – Wisin! As it turns out, I was the major fan-girl of my group of friends. Of the (seven-ish?) songs Wisin performed, I’d choreographed three with one on my to-do list. What can I say? I love his music! 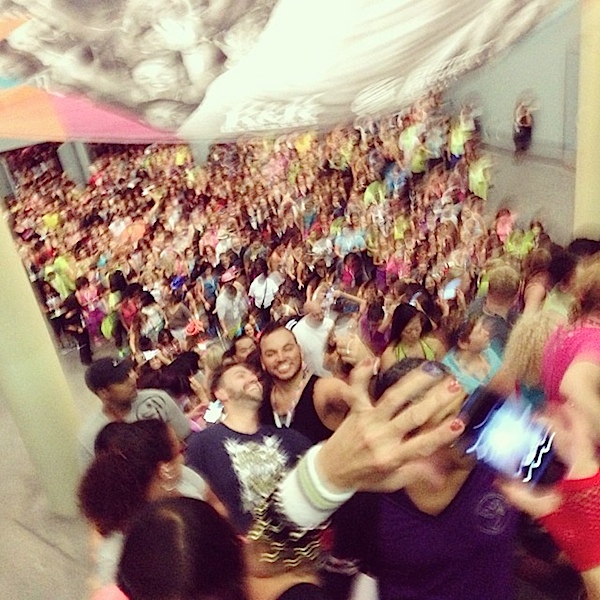 I had planned to leave before the rest of the crowd to avoid the traffic, but we got caught up with the music and fun of the concert. Next thing I know, I’m leaving the Convention Center with thousands of fellow Zumba instructors. The crowd was amped up and so happy. This is one of the things I really love about Zumba. Look at all those smiles! Few workouts leave people feeling this energized! 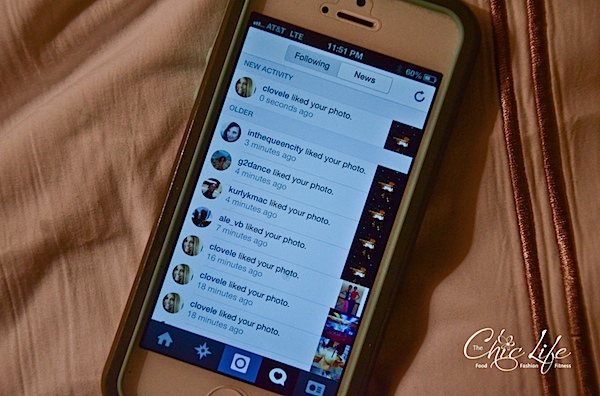 I noticed Gina Grant liked my Fitness Concert photo before calling it quits for the day. Woohoo!

With day two down, I still had two more days of Zumba-liciousness ahead!

Click here to check out my other Zumba Road Trip posts: