Click here to join my FREE 2022 Health Challenge and uplevel your health the fun way!
30 Minutes or Less, Breakfast, Not So Sweet, Oatmeal and Grains, Recipe, Vegan, Vegetarian
Jump to Recipe

Hi friends! If you follow me on Instagram, then you know I LOVE my golden lattes. So, if you’re not familiar, a golden latte is an anti-inflammatory, warm beverage. And, it is typically prepared like a latte but without coffee/espresso. Because it has a no-caffeine energy boost, this has been my go-to afternoon pick-me-up since I’ve been reducing my caffeine intake overall, but especially after around noon since this can mess with your sleep. Anywho, I thought I’d attempt to apply the flavors of a golden latte to oatmeal. And it worked very nicely! So today I’m sharing my Golden Oatmeal Recipe with Turmeric and Sunbutter. Let’s discuss! 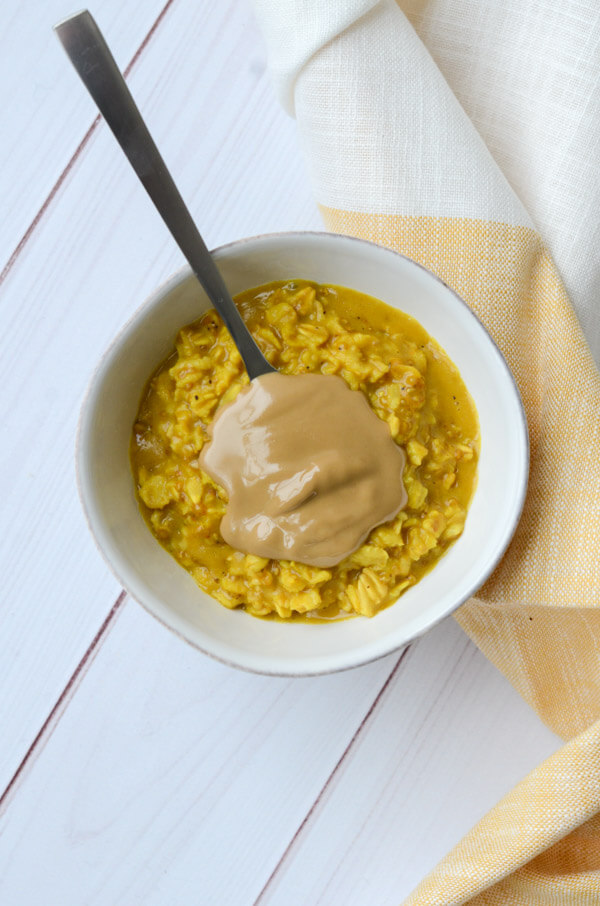 Isn’t this a gorgeous yellow color? While this photo is edited, the oatmeal is naturally yellow from the turmeric.

Why are natural colors important?

One thing that shocked me as I started getting into clean eating was how toxic many food colors can be. And, without going into detail now, I’ll just say – do yourself a favor and google them. Also, some notes online about artificial food colors are questionable. But, the fact that so many are banned in other countries was a big driver for me avoiding them.

I mean…entire countries can’t eat something, but major brands here are throwing it into packaged food like crazy? Hmm…moving on! 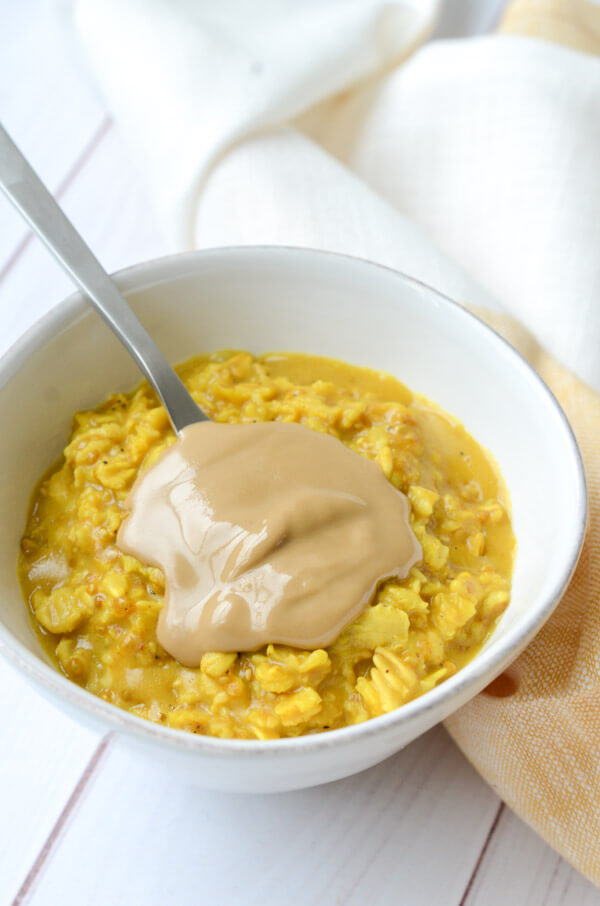 About This Anti-Inflammatory Golden Oatmeal Recipe

Turmeric is a root that has been used for medicinal purposes for at least 4,000 years according to this article over at PBS. And turmeric has many beneficial health benefits, though it seems like it’s recently been most known for its anti-inflammatory properties. Or at least that was my initial pull to try it.

Why You Shouldn’t Skip the Pepper

In my research about golden lattes, they need to include black pepper for it to be effective. According to this article at Mind Body Green:

One problem with curcumin is its low level of bioavailability, as much of it gets metabolized before it can be absorbed. But combining turmeric with black pepper (whose active ingredient is piperine) increases curcumin’s bioavailability in the body by 2,000 percent—pretty amazing.

As a result, you may want to re-read that quote before skipping the pepper. Psst…plus, you really can’t taste it. It’s just a dash. 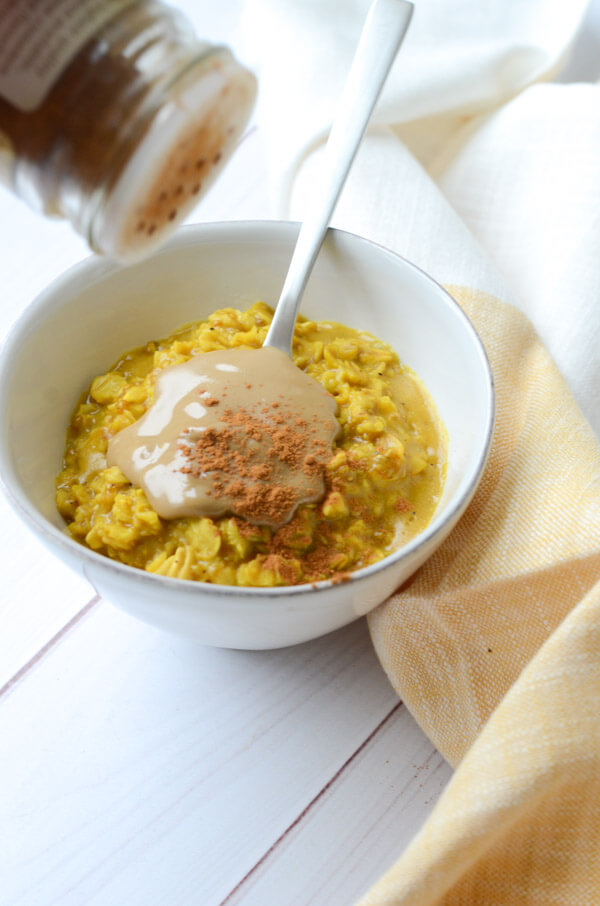 By the way, cinnamon is also a common Golden Latte ingredient and is also anti-inflammatory. 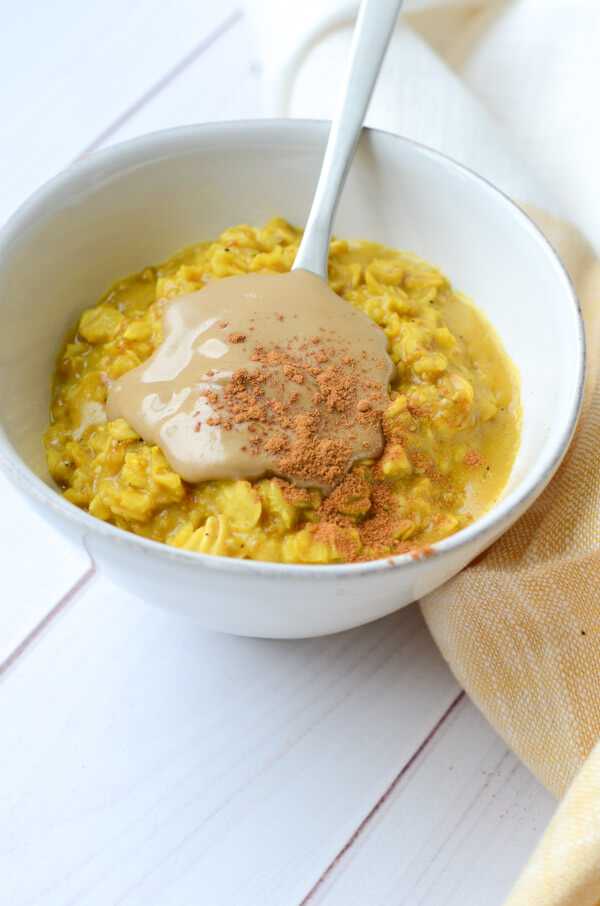 And I included cinnamon in the cooked oats, plus an extra sprinkle on the cooked Golden Oatmeal is nice too. 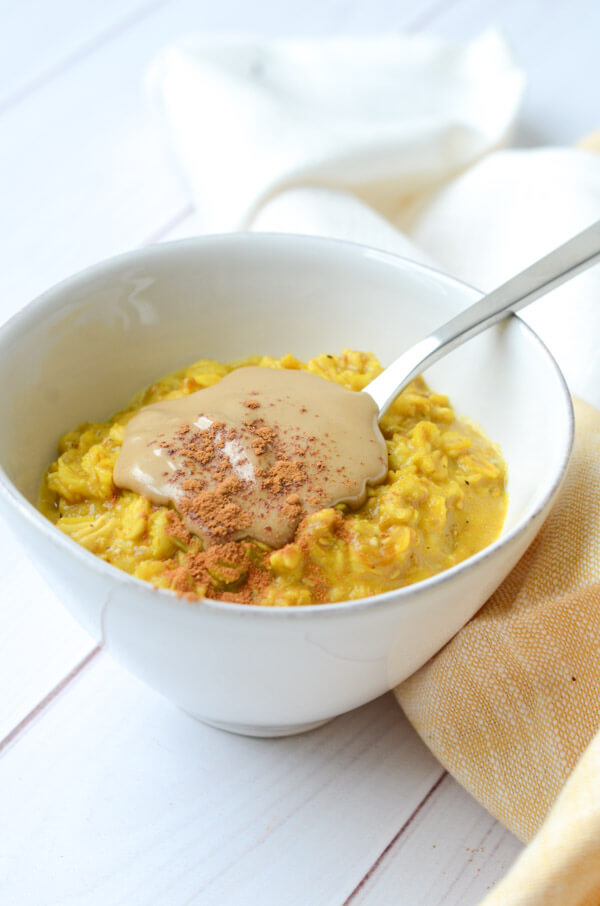 And as for the sunbutter, I added this on top to make this bowl of oatmeal a bit more filling. Yum!

If you like Golden lattes, you’ll love this Golden Oatmeal Recipe with Turmeric and Sunbutter. This anti-inflammatory clean eating recipe is easy and fast for a quick, delicious breakfast.

Make this vegan by using vegan milk. I used coconut milk, but almost any milk should work.

While I always encourage you to adjust my recipes to your taste and needs, I did want to point out that as noted in the blog post details, the black pepper is critical in making the turmeric effective.

Thanks for stopping by! I hope you enjoy this Golden Oatmeal Recipe with Turmeric and Sunbutter. Such a delicious combo! 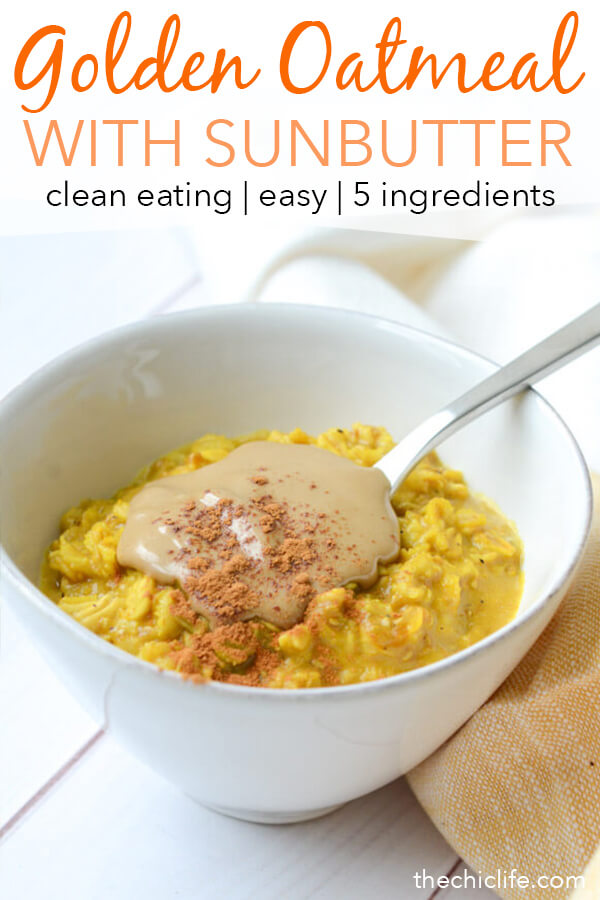 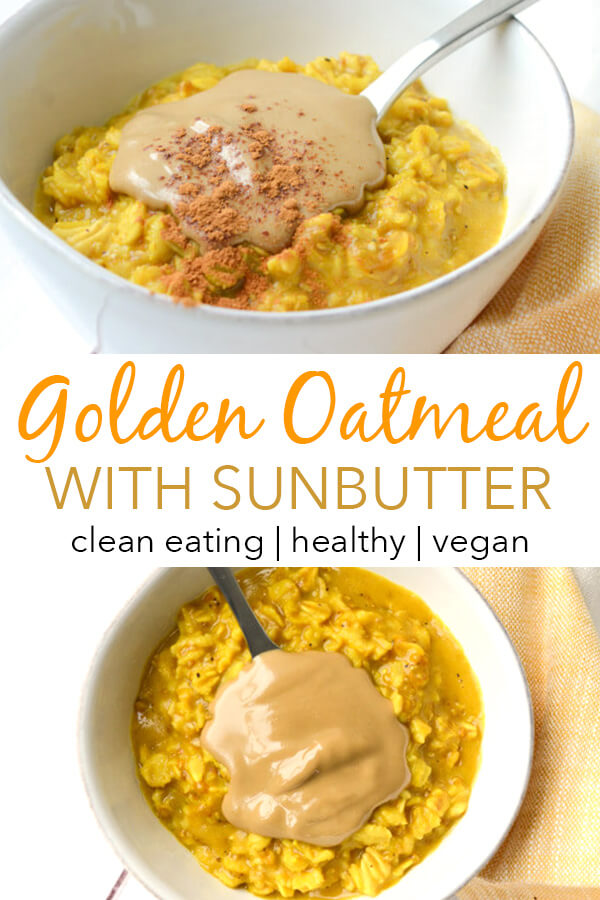 2 Comments on Golden Oatmeal Recipe with Turmeric and Sunbutter