I realized I forgot a couple resolutions and added them to my New Year's Resolutions post (click).  My two new resolutions are related to using money and leftovers more efficiently.  I decided to try out a quiche recipe in an effort to kill two birds with one stone and tackle two resolutions at once.  In some ways, I really tackled three resolutions because I planned to make this meal as early as two weeks ago when I picked up refrigerated pie crusts on major markdown for the holiday season.  I even bought cheese and broccoli earlier this week, planning to make a broccoli cheese quiche, even though I didn't really have a recipe.  This was to be my first quiche attempt ever! 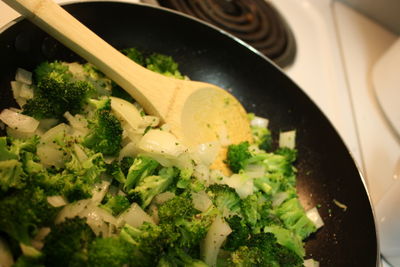 Luckily, a google search quickly yielded several options, though the only recipe that really jumped out at me was this Easy Broccoli Quiche recipe, which I found on allrecipes.com with 4 1/2 stars out of 404 comments.  At first, I was put off that nearly everyone who reviewed the recipe had made major alterations to the recipe, but then I accepted that they knew what they were talking about and I'd just have to pick someone to side with.  I copied the recipe to a word document, added 3 of the reviews complete with their takes on the recipe, and printed out the doc for when I was ready to cook.

When I was finally ready, I decided to go with Marim's comments, which read, "I made this recipe per the direction of previous reviewers, and that's what my rating is for, not the original recipe here. I used 3 eggs, 3/4 cup milk, 1 cup broccoli, 1/2 of an onion, and sharp white cheddar. Mixed all ingredients together before putting in pie crust. Cooked for about 45 minutes, until cheese turned golden brown on top. This was delicious and easy." 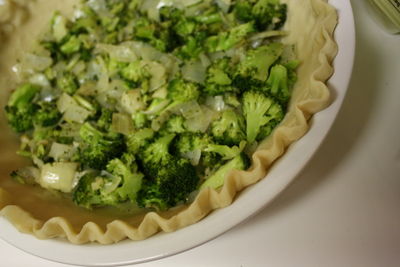 I followed the main recipe primarily, using Marim's portion suggestions and some cooking instructions.  I got to use a half onion leftover from yesterday's meal, and I added one minced clove of garlic.  I was planning to mix all the ingredients together, per Marim's suggestion, but I forgot to mix the broccoli into the egg/milk mixture, and I put the cooked onion/broccoli/garlic mix straight into the bottom of the pie plate as the original recipe directed.  Oopsie.

I did, however, remember to mix the cheese (I used cheddar) into the egg/milk mixture prior to pouring into the pie dish.  I'm not sure it made a difference, though.  The egg/milk mixture seeped into the brocoli and onions, while the cheese kinda lumped on top.  I tried to gently mix everything, but the cheese kinda stayed to the top, so I just flattened it out.  Everything seemed awfully low in the dish, as though, maybe I didn't use enough liquid ingredients.  I figured that Marim knew what she was talking about, so I wished for the best and placed the quiche into the oven for 45 minutes, as Marim suggested. 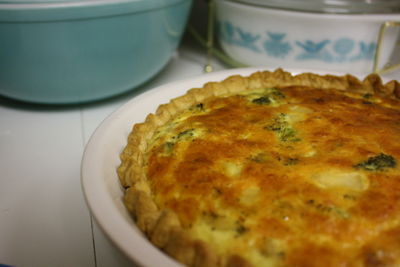 At 30 minutes, I checked the quiche to make sure nothing was going awry and to see if I needed to cover the crusts to keep them from burning.  Everything looked fine and even the center was beginning to puff up nicely (good thing I didn't add extra liquid, or it may have spilled over).  I prepped our dinner plates with some mixed baby greens and topped them with halved  cherry tomatoes (leftover from earlier in the week).  At 45 minutes, I took the quiche out of the oven and let it sit for a couple minutes. After waiting, I started to cut a slice to serve, but the center seemed…off.  Perhaps too liquidy?  I'd never made quiche before, so I didn't know what to expect for the consistency.  To be safe, I put the quiche back into the oven for an extra 5 minutes and then let it sit to cool for an extra 10.  I worried the whole time that I had ruined the meal and it wouldn't turn out right.  How could I follow the recipe of some random commenter?  What was I thinking?! 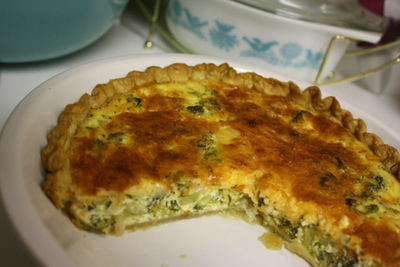 I started to try to remember what the consistency of quiche was like when I had it in restaurants in the past.  I rationalized with myself that quiche is normally a bit soft and "liquidy" in the inside…that's just how they are.  Right?  After willing up the courage, I headed back to the quiche to try to cut a slice again.  The filling still seemed a bit liquidy, but I kept going and you know what?  The slice came out just fine!  In fact, it was probably done the first time I took it out. 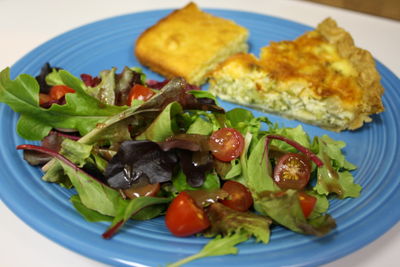 Hubby was more than ready to eat after all the extra cooking time and waiting-to-cool time, but I did make sure to snap a couple photos.  Here's a great shot of our fresh salad mix and cherry tomatoes.  I topped mine with my favorite salad dressing (3 years running) – Drew's All Natural Rosemary Balsamic – this stuff is divine! 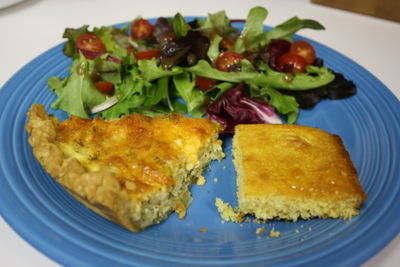 Hubby also had some steak, leftover from last night's dinner.  I also served dinner with a piece of leftover cornbread from last night, drizzled with a little honey.  The honey made the cornbread seem more like dessert and satisfied my sweet tooth, though hubby and I did end up splitting an apple to wrap things up.

I think with all the leftovers and affordable ingredients we had, I may have finally, successfully created a $5 Dinner.  I've been trying to think of a good one to make ever since finding out about the $5 Dinners blog (click).  You should check it out if you're resolving to save more money, too.  $5 Dinner mom shares great tips on affordable meals and some serious shopping savings.

I think the broccoli may have actually been more expensive, but I can't find a receipt.  I pretty much had to guestimate the ingredient costs anyways since I got most of them on sale.  Either way, factor in that we only ate half of the quiche and will have the rest for breakfast in the AM, and my meal was def under $5.  Ah-ha! 🙂