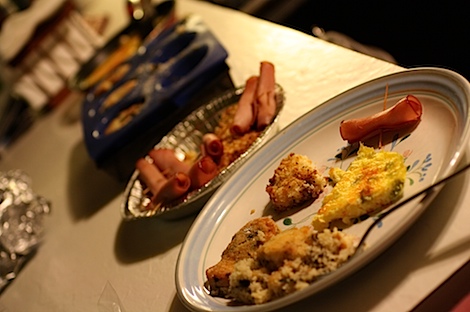 Since we got in so late the previous night, I slept in on Saturday. Hubby’s mom had left for swimming but not before making us a miscellany of breakfast items. I got a bite of each: blueberry muffin, potato cake, (I think) Canadian bacon, and an egg fritatta-style dish that had green peppers, and I think sour cream in it.

I also had a cup of coffee from the one-cup coffee maker I got my MIL a couple years before for Mother’s Day. 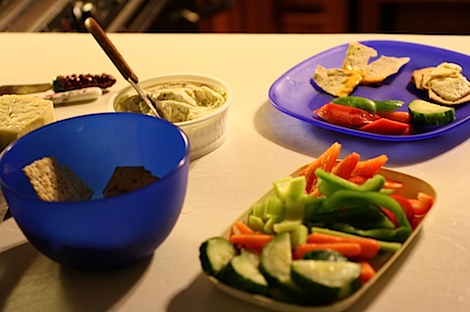 I had plans for a special bloggy dinner, so I didn’t want to fill up too much beforehand. We just had some light snacks that consisted of whole wheat crackers, tortilla chips, various cheeses and various veggies. 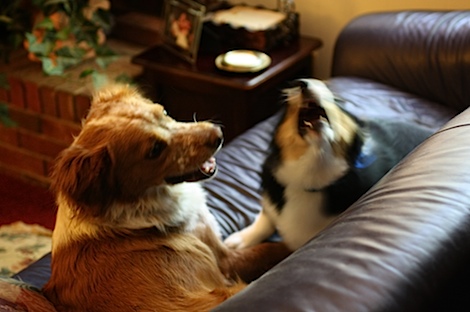 Hubby’s mom has a dog already but hubby’s bro came over and brought his dog, too, so we had a really doggie party. Bailey had a blast! 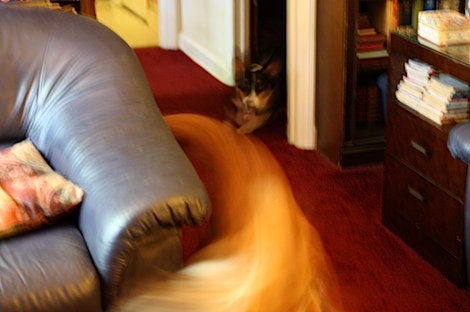 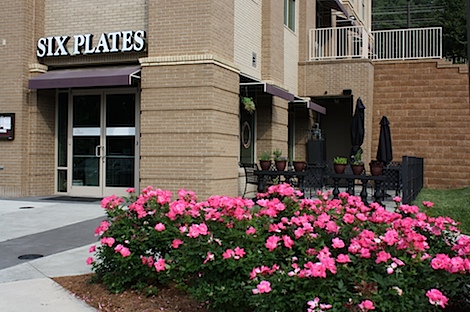 I met up with Jessica of Johnstone’s Vin Blanc at Six Plates , a wine bar in Durham, NC, for a bloggy dinner outing! It’s so nice to be able to dine with fellow foodies! 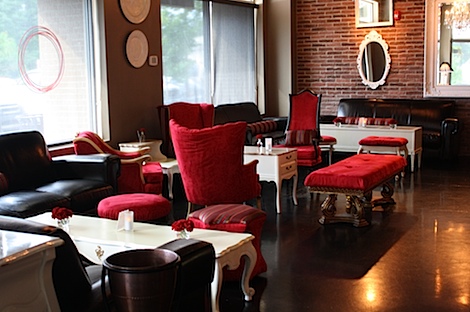 The wine bar was super swank inside, but rather than cozy up on the luxe red chairs, we decided to sit at the bar for a more interactive experience since Six Plates does not have waiters.

We were quickly greeted by Matt, the owner, who was behind the bar the whole night and took great care of us. 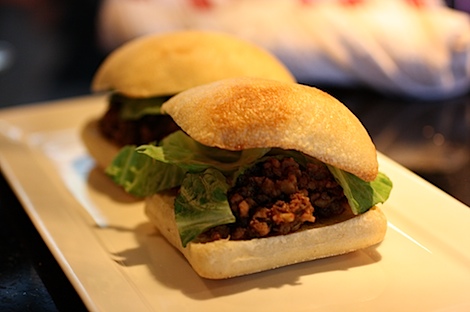 We started with the lamby joes, which were seasoned with fennel seed and were quite tasty, and an order of the steak. 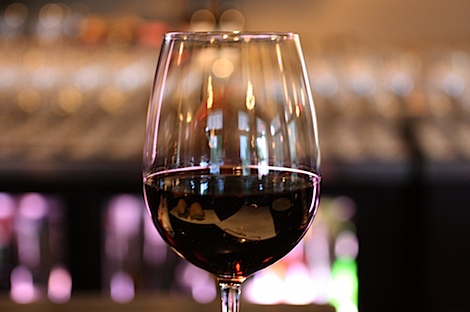 We each had a glass of the Olivares Monastrell “Altos de la Hoya” Jumilla, Spain, which was the suggested wine pairing for the steak plate. 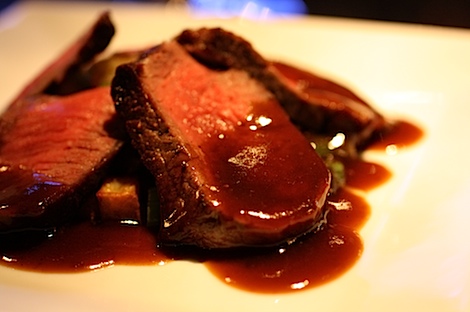 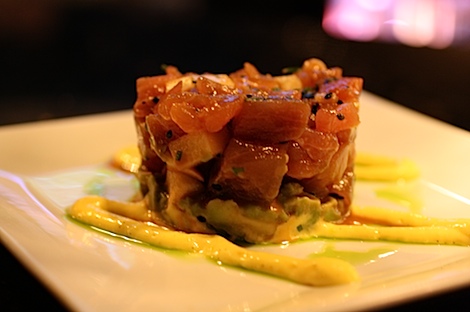 Matt surprised us by sending out the tuna tartar tower on the house – Jessica and I were on the fence about trying this one, but it was quite good (if you like raw tuna). The tuna was paired with jicama, avocado, and a lovely mango vanilla vinaigrette. 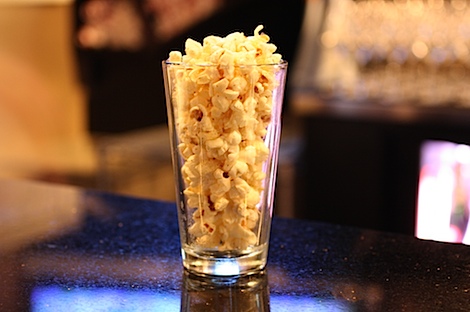 We also got a small cup of the bacon-flavored popcorn… 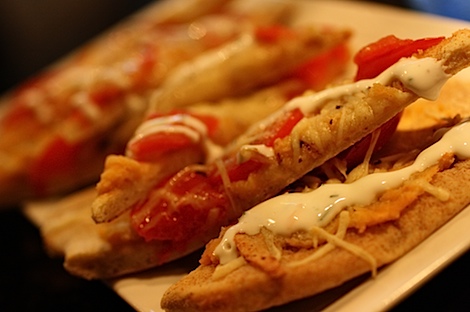 …and the flatbread of the evening, which had a chickpea puree with local tomatoes, a cheddar cheese and a yogurt sauce. I think the flatbread was my fave dish of the night – it surprised me the most with its interesting combination of ingredients and light yet tasty flavor. 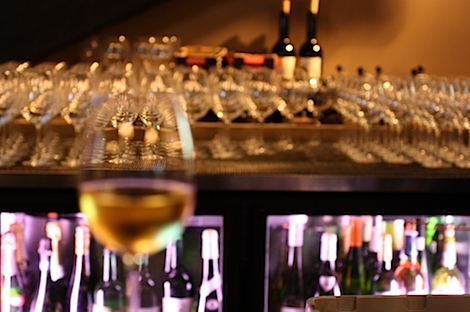 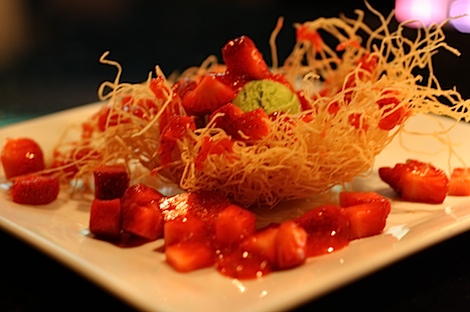 We also tried the Strawberry Shortcake dessert but subbed the Thai Basil gelato for the Goat Cheese gelato listed on the menu. 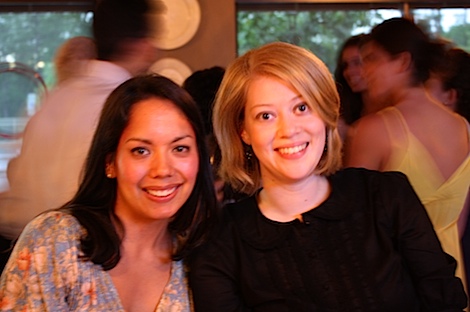 We were 2 happy foodies after all these good eats! We had a blast at Six Plates between the great food and awesome service. Matt and his staff really took care of us. 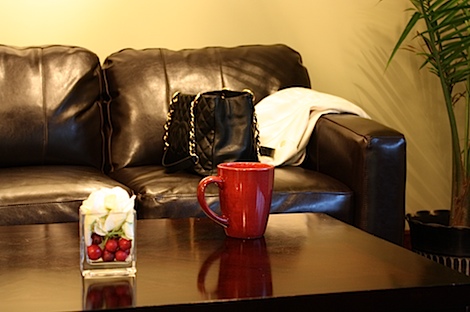 After dinner, we decided to grab a quick coffee at Copa Vida (in the same shopping center), and boy am I glad we did! 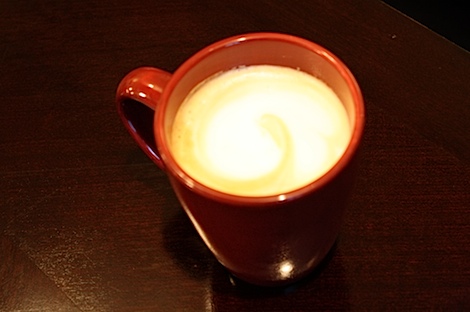 I was going to get my usual (Vanilla Soy Latte), but decided to switch up the syrup with Caramel and then last minute, when I heard they used a local creamery’s milk, I got whole milk, too. 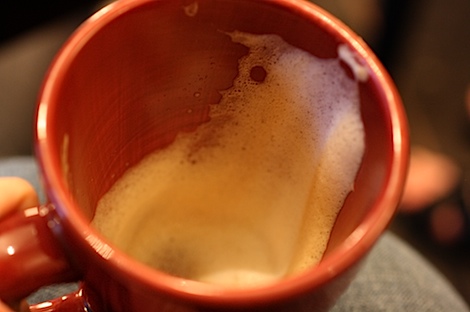 This was one of the best lattes I think I’ve ever had! Look at how thick that froth is! Yum! 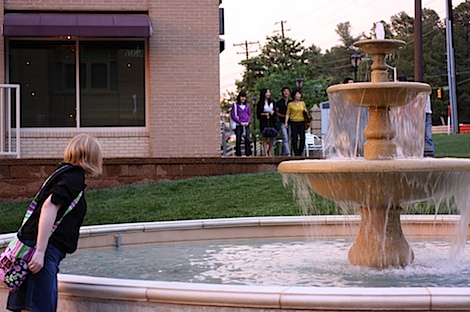 We ended our foodie adventure with a quick trip to the fountain outside to make wishes!

Jessica, thanks so much for the super fun bloggy outing! We’ll have to do this again some time soon!