I can’t help but post a photo or two from breakfast. 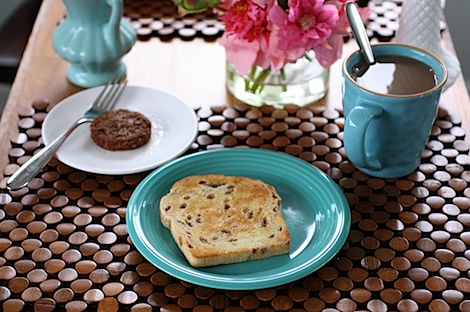 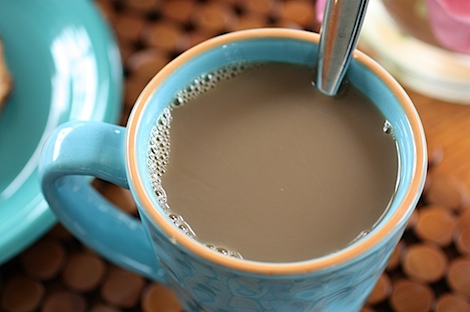 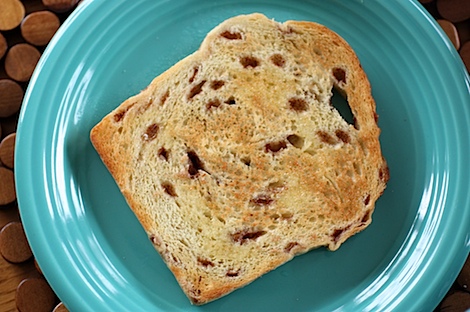 Not that I think the photos are spectacular, but oh the colors! They’re so pretty together! The turquoise! The pink! 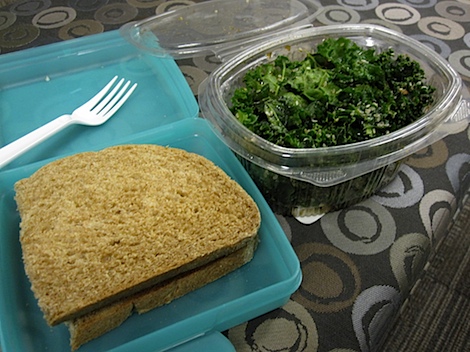 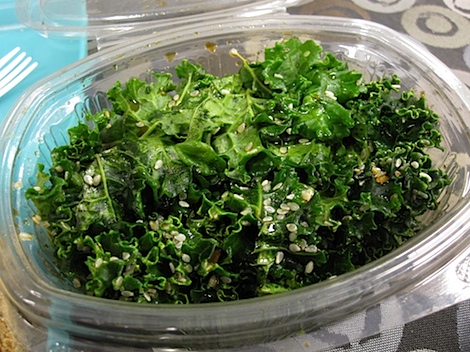 I had a toasted turkey sammie but the darn toaster oven in the office must be broken because it only toasted the top half. Grr. My sandwich still tastes better warm and half toasted than cold and not toasted at all. I added a dabble of dijon mustard and wow! I have to say I’ve forgotten how darn good mustard is! Only 10 calories and a whole NEW flavor!

On the side, I had some marinated kale. All I can think when I eat this stuff is uamami. But not just like “umami”…it’s more like “uuuuuuuummmmmaaaaaaammmmiiiiiiiii.” (thought with a happy smile)

Fran Costigan, an amazingly kind and talented woman and my baker for the goodies I won at the online bake sale, contacted me yesterday to let me know my goodies would be delivered around noon. Sure enough, at 11:45 hubby called to say they were there! I was so excited but sad to be trapped at work with 6 hours before I could try the goodies first hand.

Luckily, sweet hubby dropped some goodies off to me! 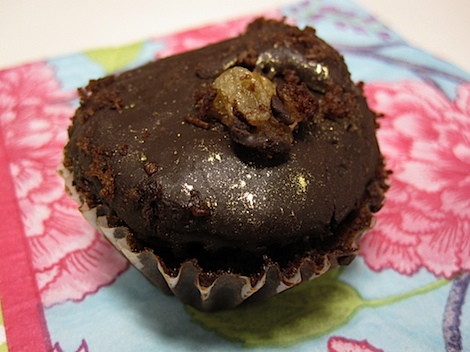 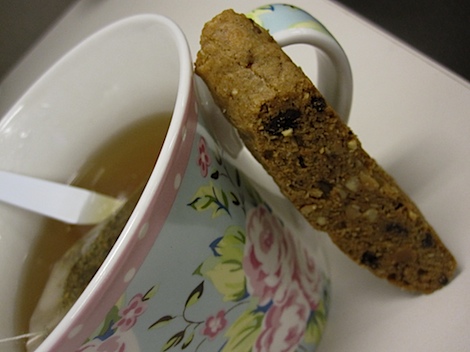 …and an organic almond anise nibby biscotti with some Tulsi Sweet Rose Tea. 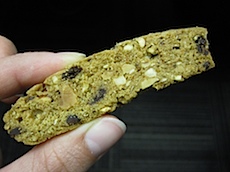 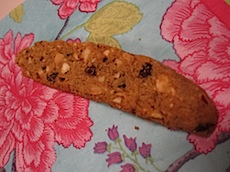 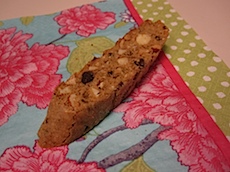 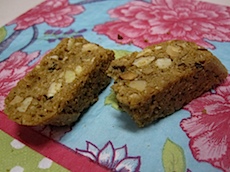 Ok, ok, so I had FIVE pieces of biscotti. This stuff is addicting, I swear! But the best part? Fran tweeted to let me know they are totally healthy and made with whole wheat flour and maple syrup. Yay! Sounds like I need to get Fran’s cookbook, no? I’ve already been trying to make more and more healthy substitutions in my baking and Fran seems to have some great tricks up her sleeve! 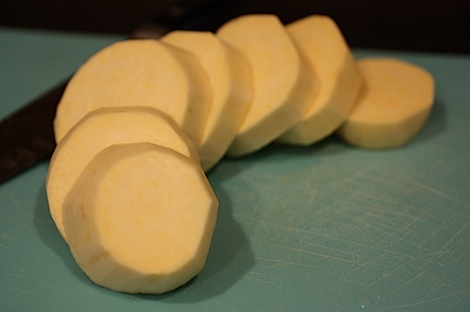 I let the oven do the heavy lifting today after work dinner-wise.

I found this white sweet potato at Earthfare. I didn’t even know they existed, but it seemed like something good to try. 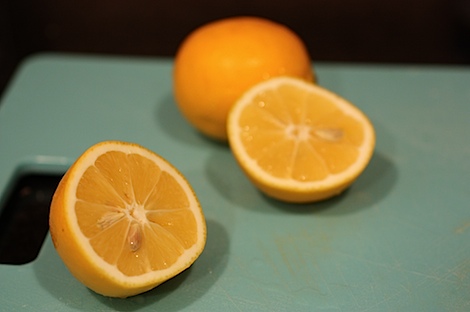 Earthfare had Meyer lemons on sale today, 4 for $1. Score! 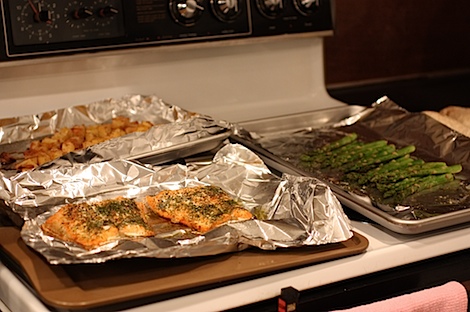 I seriously let the oven cook EVERYTHING tonight. Though slower, I love how the oven let’s me work on other things while it works.

I held a little photo shoot (post coming next) to photograph my goodies from Fran. So fun!

The final result (shot with a little extra exposure kicked in): 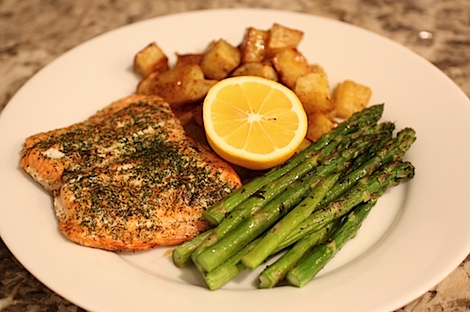 Hubby really liked all the food, as did I. His fave – the asparagus. My fave – the salmon and the potatoes. Hubby said the potatoes tasted apple-y to him. Interesting, no? 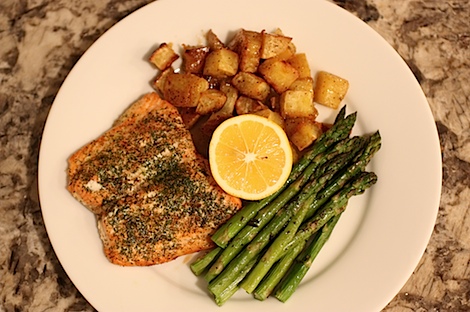 So tonight whilst picking up groceries, I noticed the farm-raised salmon was on sale while the wild alaskan wasn’t. I asked the guy about the fish. I’ve talked about why I like wild better than farm-raised before, but tonight, the fish guy said that they’re starting to move towards farm-raised. He said that wild isn’t as good because of oil spills and pollution in the ocean. After confirming that the farm-raised salmon was not dyed, I decided to just go ahead and get it. Sheesh, who knows which one really is better? It seems like there are so many factors to the quality of fish that can’t be gleened from the label “farm-raised” or “wild.” I say trust your fish guy – he knows more about the fish than you do and should be able to make good recommendations for you. 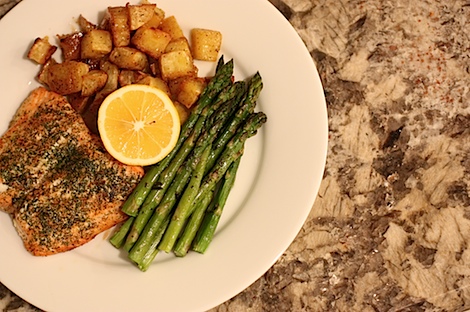 I did a play on this roasted asparagus recipe by Rachael Ray.

NOTE: This cooks well with the salmon since they cook at the same temp. Just be sure to start the potatoes well in advance of the fish.

PS I totally gobbled up the rest of my mini chocolate cakes. Heehee They were simply to good to save for tomorrow. I’ve got biscotti on tomrrow’s eating agenda…perhaps some for breakfast and some for afternoon snacks? 🙂