Have you heard about the WordCamp conferences yet? They’re super fun 1-2 day events for users, designers, businesses, and developers who use or are curious about WordPress (which is software many use to create and run blogs and web sites of all shapes and sizes). Each conference is typically run by a group of volunteers from the local WordPress meet-up, so they have their own style and flair while still following some main guidelines. 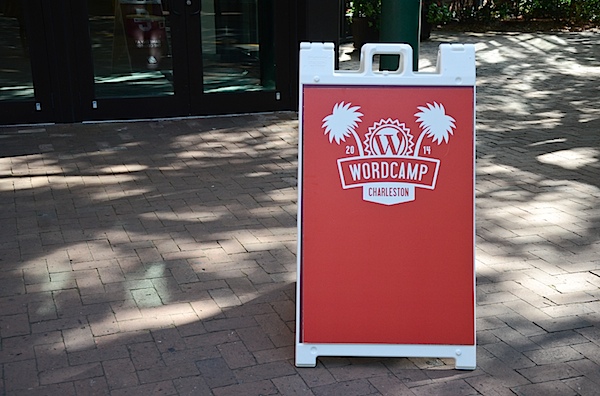 I learned about WordCamp Charleston when I was down in Atlanta recently. There was actually a WordCamp there, and I had planned to visit my cousins and attend the conference all in the same weekend. Plans fell through when the event sold out in two days, and I was not one of the lucky ones holding a golden ticket. But, I had already confirmed my trip to Atlanta, so…I decided to crash it. Sort of.

Well, first I emailed offering to volunteer as a photographer or whatever they could take for help. When I didn’t hear back, I decided to just swing by to see if they needed any additional help or to at least say hey to one of the Automatticians I met at the last WordCamp in Raleigh. I ended up talking a bit with Kathy, one of the co-organizers, who was very friendly and even offered for me to walk around a little. Due to some unexpected events that day, I actually wasn’t able to stay, but guess who was right beside me when I was chatting with Kathy – Karl. I got to talking to Karl and learned he was planning a WordCamp in Charleston. This time, I signed up for his email newsletter immediately (literally – right on his phone!) so I would stay in the loop of when tickets went on sale. And, I emailed Kathy about getting added to the Atlanta list, too, for next year’s event! 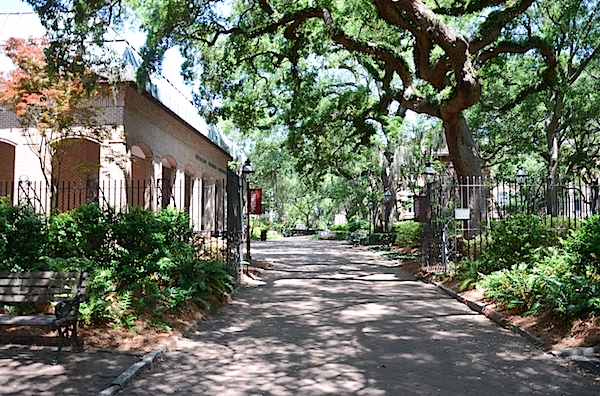 This weekend’s WordCamp took place at the beautiful College of Charleston, right in downtown. 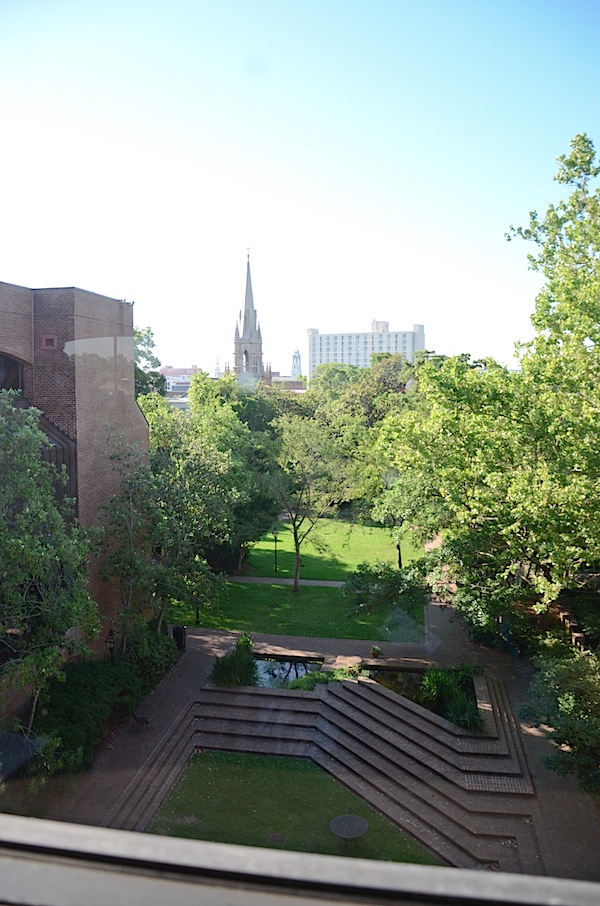 The campus was beautiful, and it was a great time of year to visit. Or, we just got lucky with the weather. It was sunny and warm, but not too hot and humid. 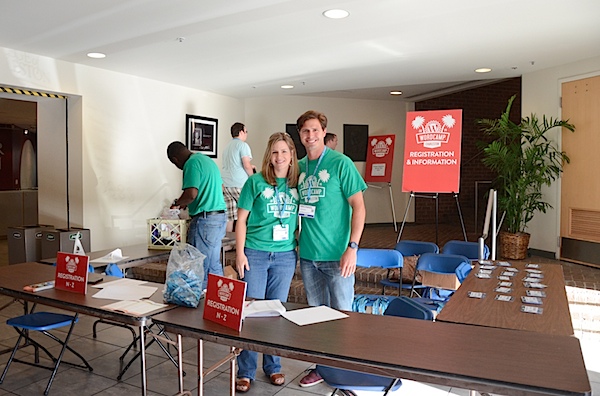 Right away, you could tell this volunteer team had their act together. Everything was so well organized right from the start, and that only continued throughout the day. 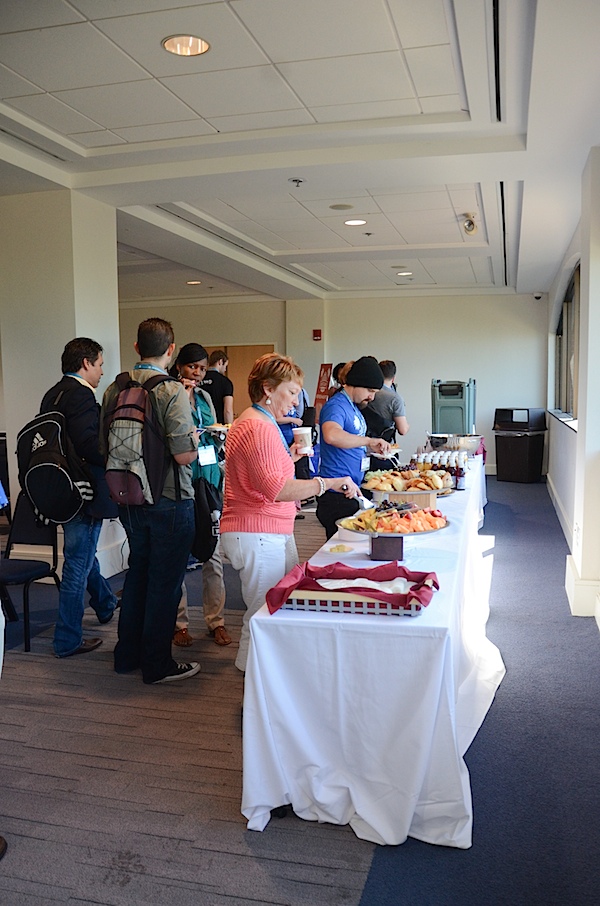 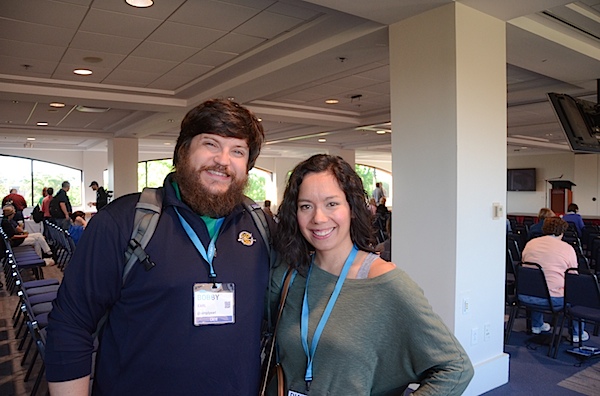 I was a little nervous about attending the conference. I only knew one person really well – my friend from college, Bobby Earl. After that, I had met Karl and two Automatticians, Chase and Kevin, previously. I decided I was going to have to put myself out there and make some new friends. Although I have a fairly outgoing personality, I’m really an introvert at heart. But, I was ready to meet some of the fellow WordCamp attendees. The great thing about WordCamps (that I’ve attended so far, at least – seems to be true at all) is that everyone is so friendly and welcoming. WordPress has a great community of smart and kind people who easy to strike up conversations with and get to know. And, you already have built in common ground! 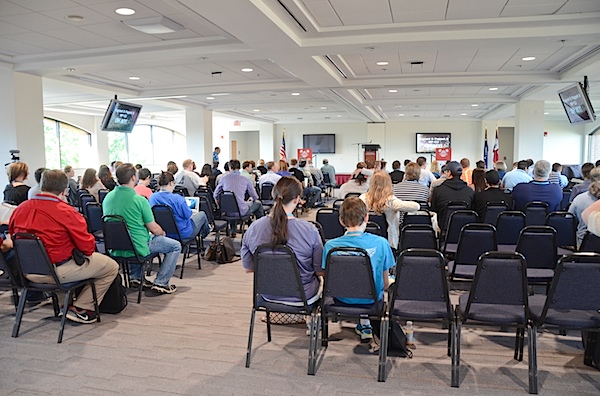 This WordCamp was a one day event comprised of opening remarks, three morning sessions, a lunch break, the keynote, two afternoon sessions, and closing remarks. After a kick-off in the upstairs ballroom, we were off. 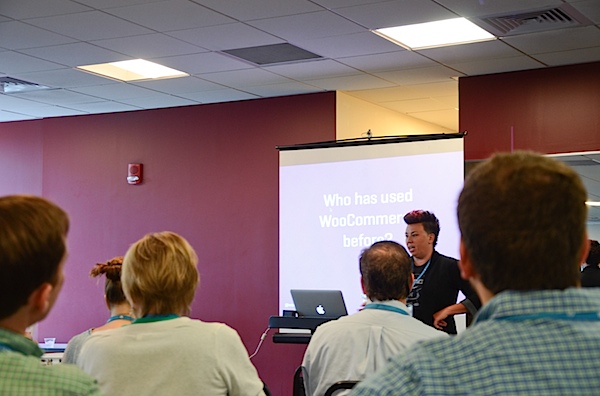 I ended up sticking mostly to the Content/Business track. I’d like to brush up on my tech skills so the Developer track is more useful for me in the future, but I’m not there yet.

For the morning sessions, I attended:

I’ll share my key takeaways on my other blog as soon as I get the chance to summarize my thoughts and notes. 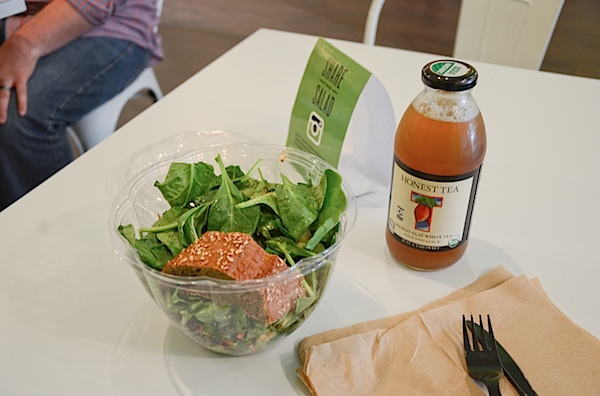 I tagged along with the Automattician team for lunch at Verde where I had a delicious curried beet salad. We had a fun group and some great discussions. I was so glad to have found some awesome people to get to know over lunch. 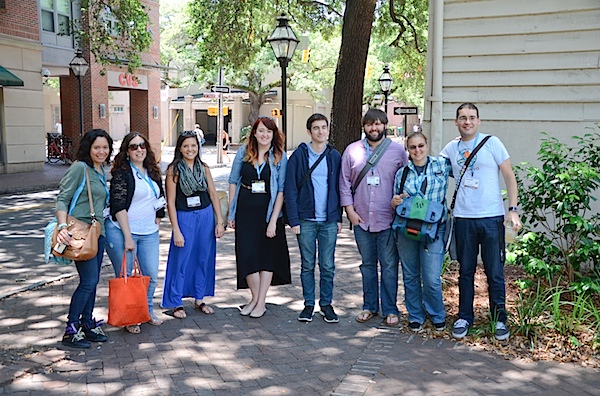 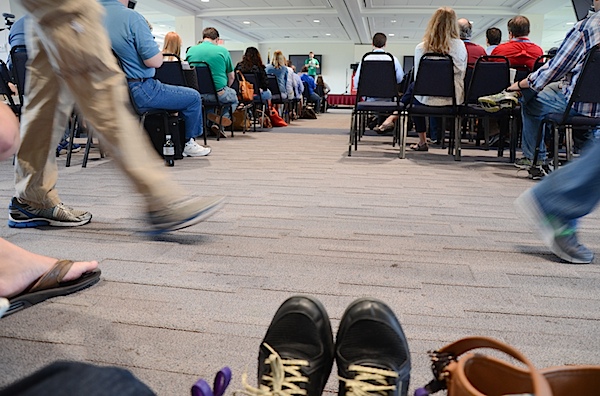 The room filled up quickly back at the conference for the Keynote with Andrew Nacin. I found a spot in the back with some of my new friends. 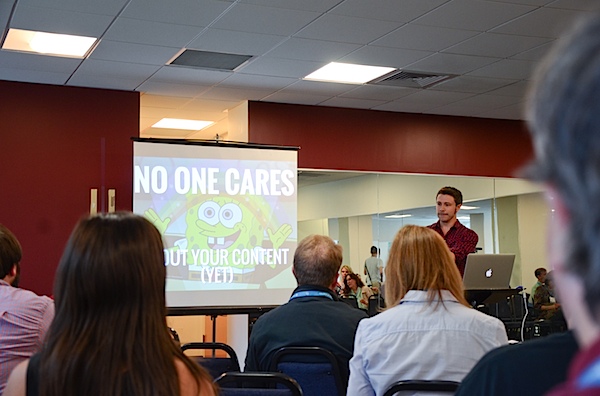 For the afternoon sessions, I attended:

All of the sessions were great. Can’t wait to share some of my notes. I took a ton! 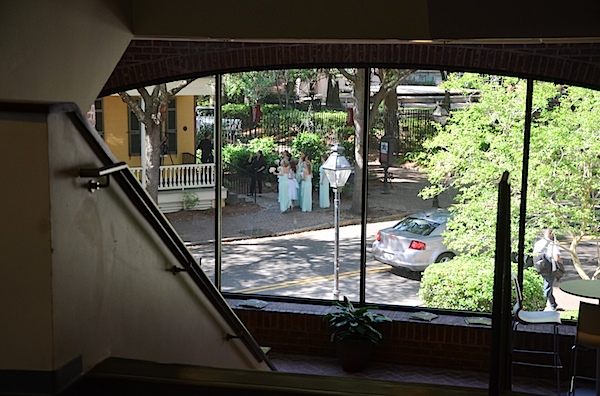 After the conference, we headed to Kudu Coffee and Craft Beer for the after party, which was sponsored by BoomTown. 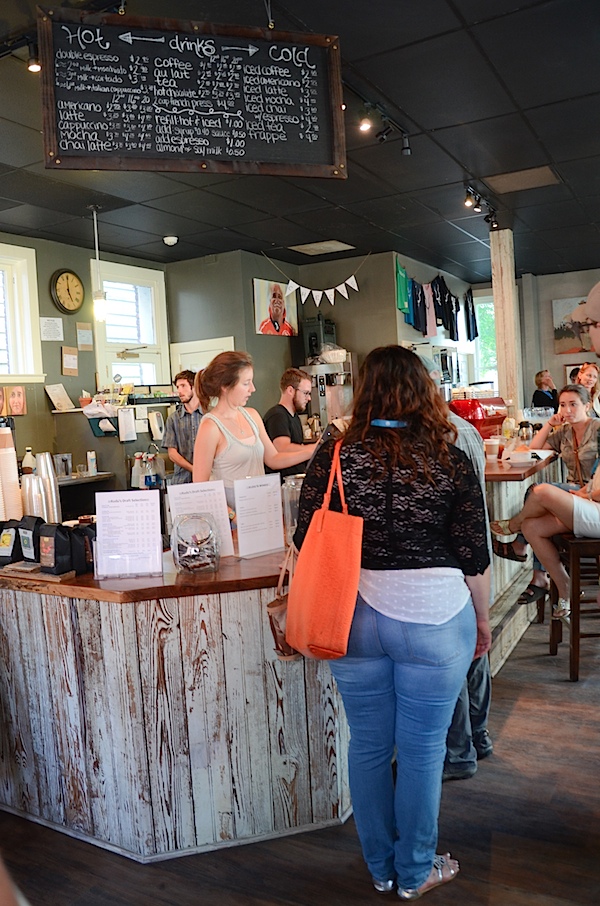 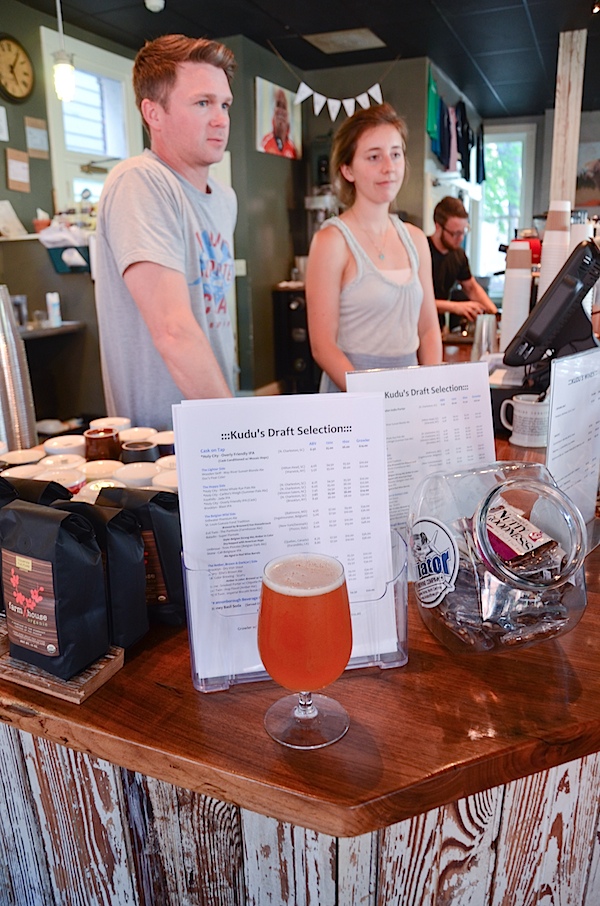 I went for the Evil Twin farmhouse ale. 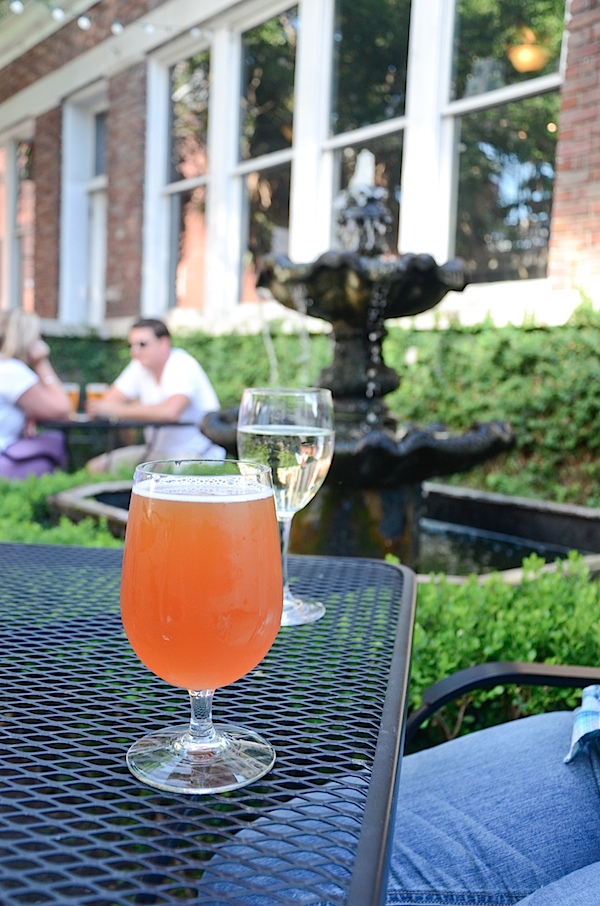 We took the after party outside, hanging out in the beautiful patio. The weather was perfect for enjoying some fresh air. The conversations flowed like the fountain next to our table as the sun slowly set over Charleston, bringing an end to a very successful WordCamp.

Congrats and great job to Karl and all of the other wonderful volunteers. You did it! 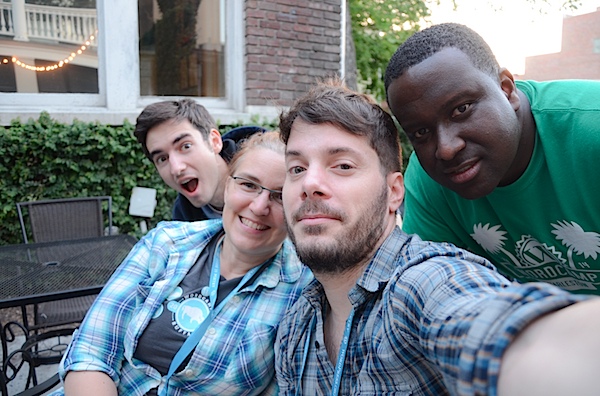 I’m sad that WordCamp Charleston is over, but there’s good news. I’m going to WordCamp Asheville in just a couple weeks. Woohoo!

To my fellow bloggers – if you’re on (or are considering moving to) WordPress, you should absolutely attend this event. It’s not just for techies, so even if you’re not into code, you can learn a lot to apply to your blogs. For a list of upcoming WordCamps, click here – they’re all over the world!

Also, I got to visit two very cool restaurants while I was in town, so look for a couple restaurant posts next. I also created this TCL Travel Pinterest board to feature photos from past Charleston food adventures. I’ll be pinning those new posts there as soon as they’re live.