As soon as I got to town, I took a shuttle to the hotel, which took forever.  The shuttle driver did give me and the other riders an unofficial tour of the city, pointing things out as we passed them. 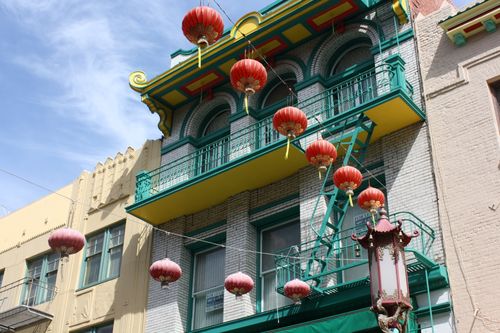 By the time I got to the hotel and took a couple minutes to settle in, I was starving!  I took another couple minutes to glance at the maps long enough to figure out how to get to Chinatown.  The shuttle driver advised us to get muni passes to use the public transportation, so I went to the front desk who told me to go to the concierge who told me to go outside and look for the trolley people.  I didn’t see them, so I decided to just walk it.  It was a good walk – nice to see the street names, but it was a loooooong walk!  They aren’t kidding when they say SF is hilly!  It was uphill a lot of the way, but I made it to Chinatown in pretty good time. 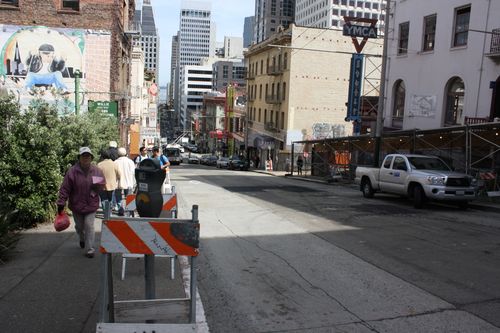 Before leaving for SF, I did some research into restaurants…of course!  Anyone who has read this blog for awhile knows that I am a big fan of dim sum – it’s one of my favorite types of meals.  I googled for dim sum restaurants and found some good reviews for this place called the Hang Ah Tea Room on yelp.com.  According to the reviews online, many people found the restaurant by getting a flyer from a lady standing on a corner in Chinatown.  Most reviewers remarked that it was a good thing that the lady was there because she walked many of them to the restaurant and they said they wouldn’t have found the restaurant without her help.

Since I knew that the Hang Ah Team Room was hard to find, I paid careful attention to note the street intersection closest to the restaurant – Sacramento and Stockton – when I was reviewing the map.  As I headed to Chinatown, walking down California, I looked for Stockton.  Before I reached Stockton, I headed right towards Sacramento (one of the main Chinatown streets) and then left back towards Stockton.  I was making good time and having a good time taking in the sights, too.  The streets were quite busy.  I was looking all around for the streets and the sights when I ran smack into the lady with the fliers…just like the reviews said!  I was so busy trying to look at the street signs that she was right there in front of me before I knew it!  I asked her where the restaurants were and she offered to walk me there (again…just like the reviews said!).

I snapped a quick picture of the lady with the pink fliers in case you’re wondering what she looks like (see photo above). 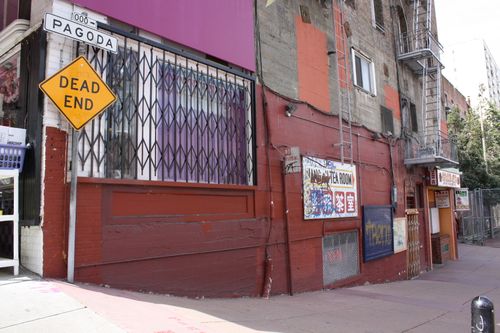 Thank goodness she walked me to the place because it really was hard to find – just down this “alley” called “Pagoda.”  The restaurant is just to the right of this photo. 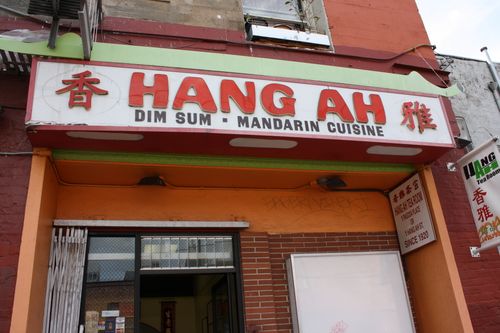 Again, just like the reviews said, the place’s exterior wasn’t exactly glamorous, but don’t let it fool you, the food inside is good. 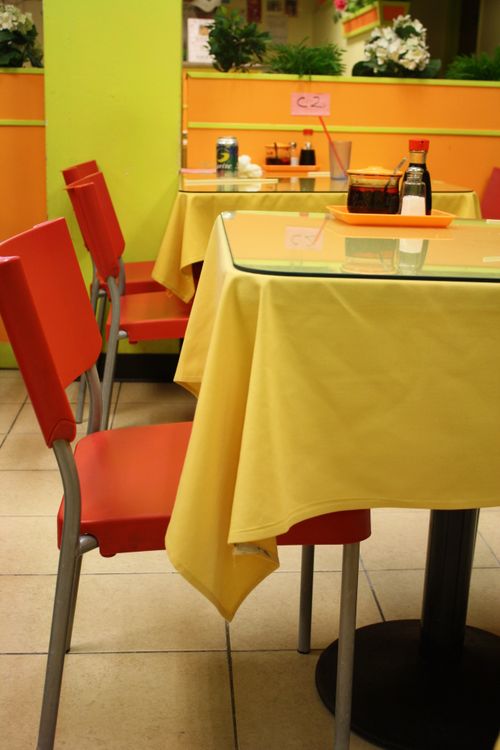 The interior is a little cheesy, and the space is small.  It fills up pretty quickly – that lady with the fliers is good!  Since I was having a late lunch, I expected the restaurant to stay pretty empty, but it was nearly full by the time I left! 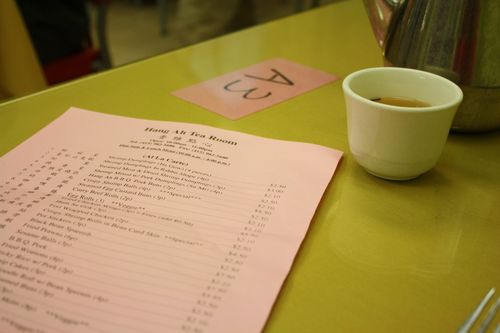 The pink flier and my table – I sat at A3.  Even though I was pretty hot by the time I got to the restaurant (from all the outdoor, uphill walking), I had some hot tea to drink. 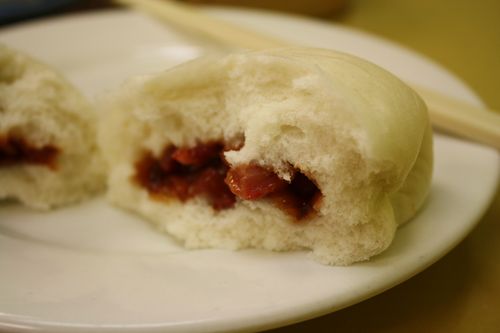 I had steamed BBQ pork buns (I only ate 1, though).  They were quite good – a little different than what I’ve had at most dim sum restaurants – mostly in shape since the tops on these buns were smooth. 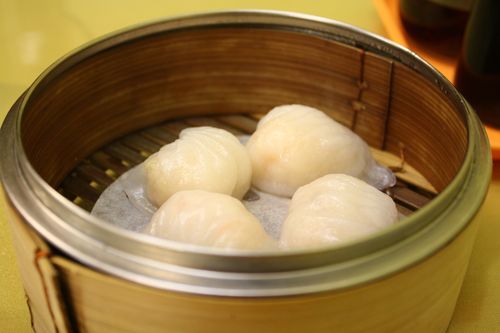 I had some shrimp balls, too. 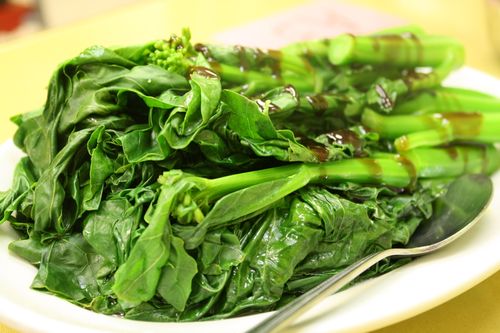 I had another fave – Chinese broccoli with oyster sauce. 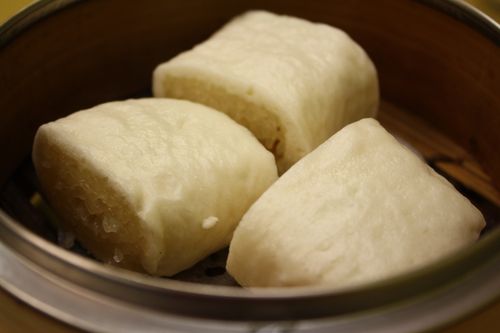 I also tried a new item – sticky rice (veggie).  I wouldn’t consider this a veggie sticky rice because there weren’t any vegetables in them.  They did have peanuts and were slightly sweet.  They were ok, but I was pretty stuffed from all the other food.  Dim Sum is not easy to eat alone.  I tried to offer some of my food (before I dug into it) to the couple next to me, but they had already eaten their “meal” part and were waiting on some sesame balls for dessert.  They were very nice & friendly, though.  They said I made some nice selections, too. 🙂 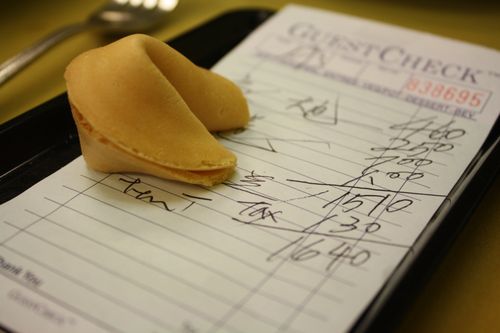 Most of the dishes were pretty cheap (pork buns were a mere $2.50!), but I think the Chinese broccoli made lunch a little more expensive than it could have been otherwise.  Still, it was worth it.  I should probably add, too, that the waitress was quite pleasant – very smiley and friendly. 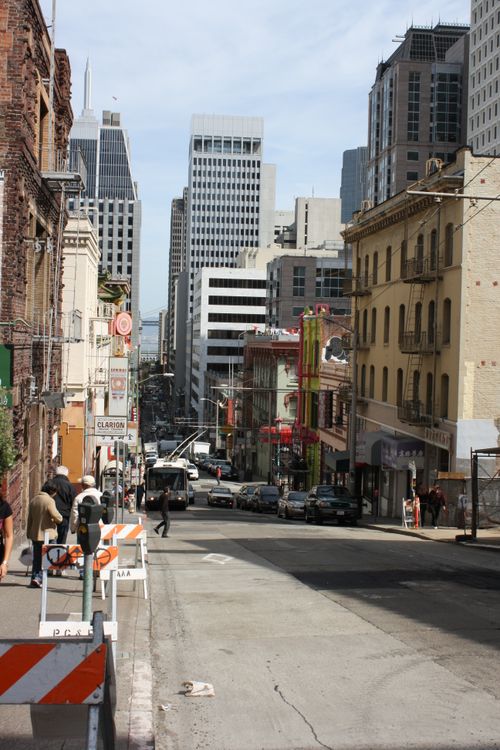 After lunch, I headed down towards Grant (the other main Chinatown street).  There was a lot of construction on the streets. 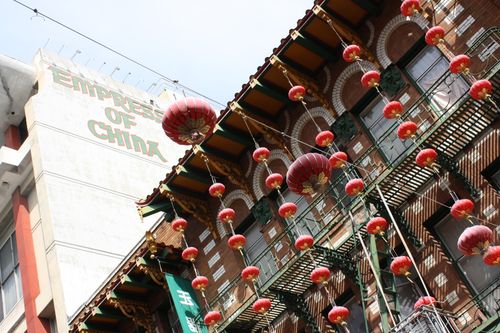 Grant is where all the pretty lanterns are. 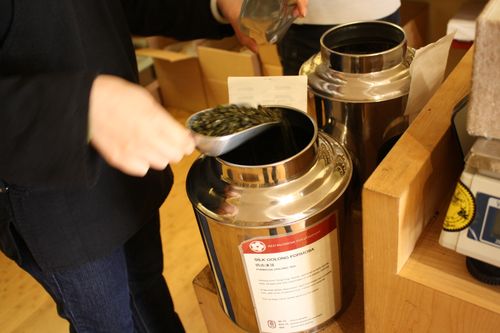 I wanted to peruse the shops, but was running short on time, so I only went into one – the Red Blossom Tea Company.  I wanted to browse the shop, but was in a hurry so I asked the lady working there what tea I couldn’t get back on the East coast and she suggested an Oolong tea – Silk Oolong Formosa.  In my haste, I scanned a couple labels for pricing and I thought I was only buying $6-8 worth of tea.  I felt a bit duped when my quarter pound of tea rang up at $23.75, but it was too late to turn back.  Hopefully this stuff tastes as good as it smells! 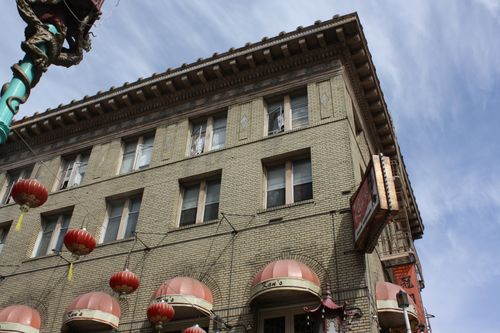 I love the open windows and clothes hanging in the windows – it makes the place seem so authentic…I’d never see this in my neighborhood! 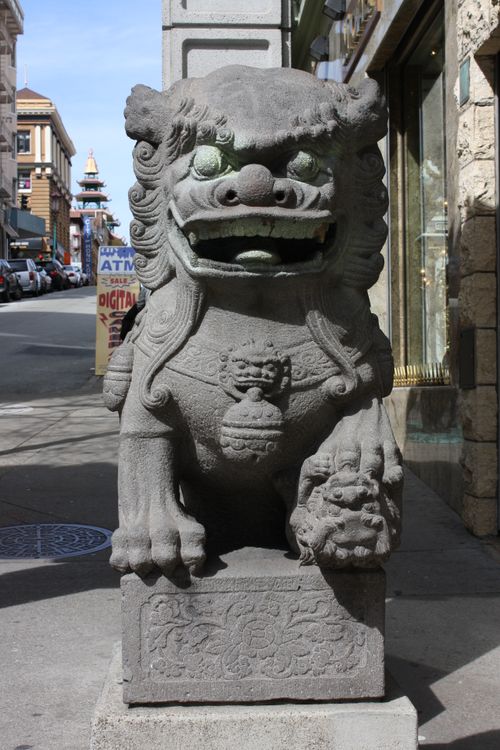 In front of the Chinatown gate. 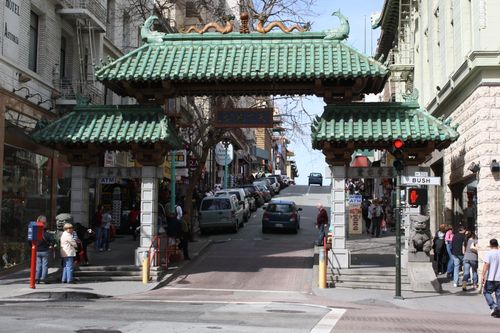 Oddly enough, the Chinatown gate was the last thing I saw in Chinatown.  The Chinatown area seemed to extend past the gate, but I believe this gate is supposed to mark the entrance?  I headed out of Chinatown and towards Powell street to grab a muni pass (the one I never found earlier in the day).

More on adventures on Powell street next time…I gotta get to bed for now!