Like most Americans, when the Fourth of July rolls around, my foodie-mind usually thinks of one thing – grilling-out. Desserts are often an afterthought. Seriously, I can’t even remember what sweet I made last year, if anything (ok, just checked my blog archives and we made peach cobbler)! But this year, things were different. While I’ve known we’ll probably grill out something on Monday, my mind was fixated on something new – making a patriotic-themed dessert: this Fourth of July Cupcakes recipe. 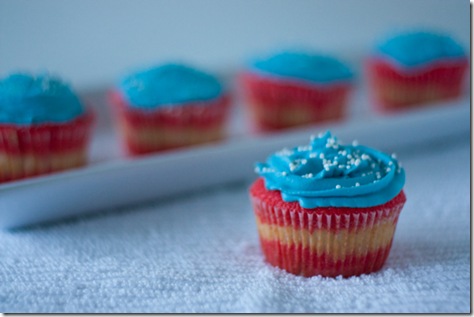 And after seeing these awesome rainbow cupcakes by Baking Bites, I knew exactly what I wanted to do – a layered cupcake with red, white, and blue colors for the holiday. 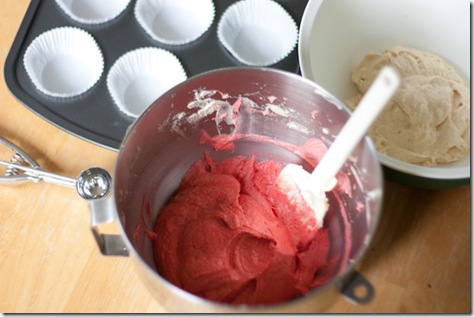 Luckily for me, my sister helped me tackle the project. We started by making vanilla cupcake batter for 12 cupcakes. Then, we poured about 1/3 of the batter into a separate bowl to serve as the “white”. To the remaining batter, we added gel coloring in “red” to tint the batter till we were happy with the color. The batter looked kind of pink, but turned out a deeper red after we baked it. 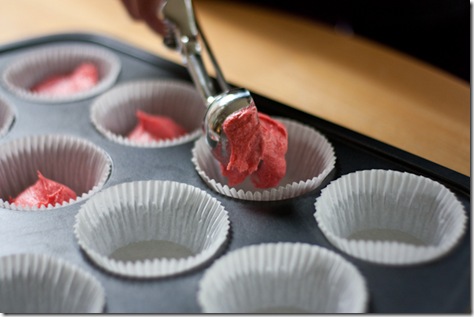 We used small ice cream/sorbet scoops to fill the cupcake papers with the first layer of red. 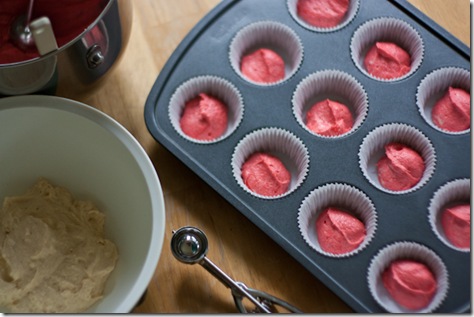 The distribution doesn’t have to be perfect. We just eyeballed our measurements (and actually our bottom red layer was thicker than our top…oops! 😛 ). 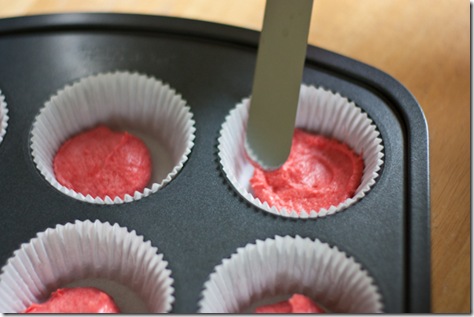 Sis used an off-set spatula to smooth out each layer. This step isn’t necessary, but if you don’t flatten out each layer, your layers will be a little wonky-looking. 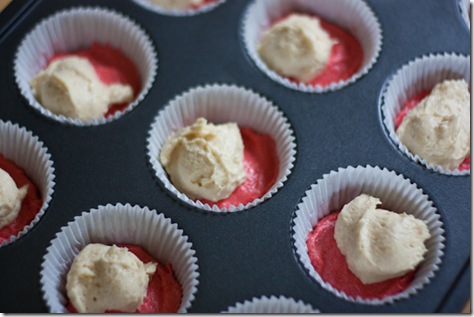 Next, we added the white batter, flattening each layer out again. 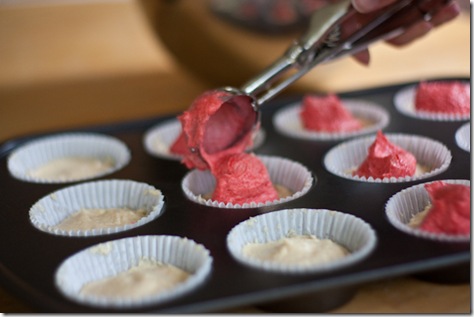 And then the final layer of red. 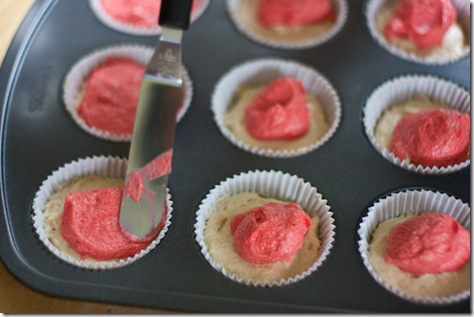 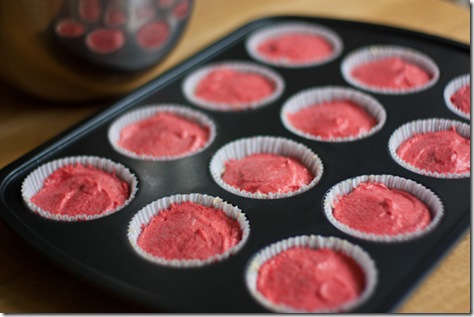 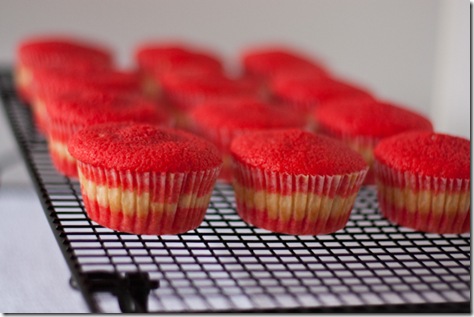 But once we took them out of the muffin tins, we saw the difference. Check out those stripes! The cupcake layers weren’t in perfect lines, but I thought they looked great. 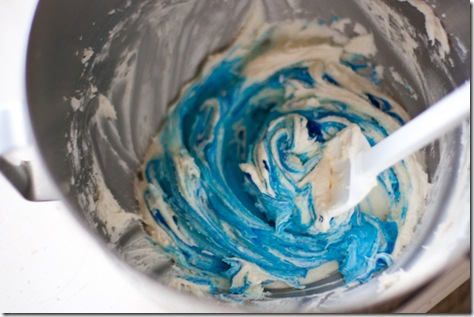 Next up, we tinted the buttercream frosting with more gel coloring in blue. 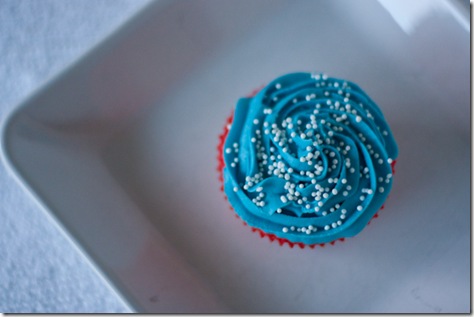 White sprinkles completed the patriotic look (and look kind of like stars, high in the sky no?) 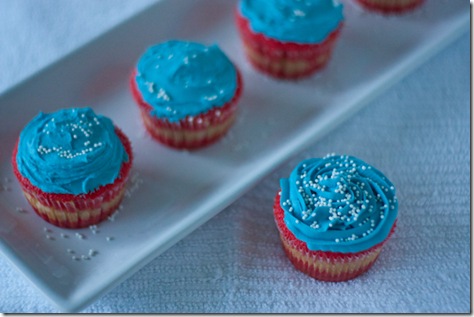 Oh, and as for the frosting, you can do fancy piping like the one in the front… 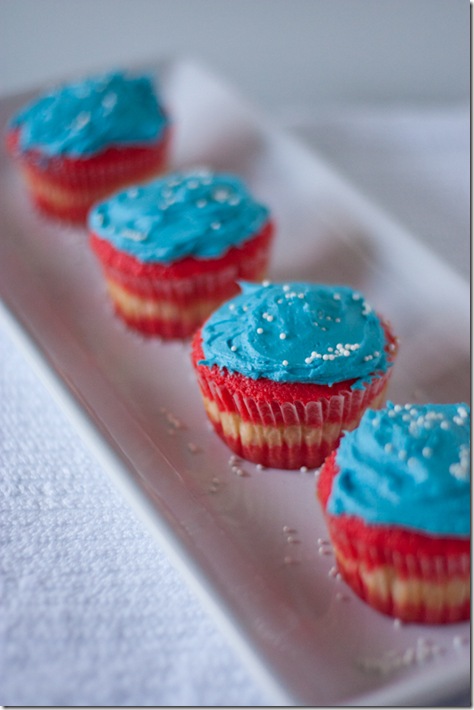 …or you can just spread frosting on old-school style like mom did. I think either way looks pretty good, though the latter is much easier and doesn’t require fancy tools. 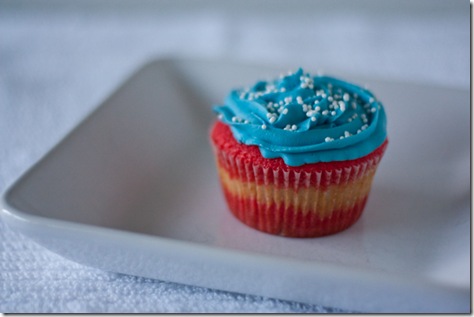 Though, sometimes fancy tools are worth it. You can get 12 disposable bags for about $4. The coupler is about $1, and the point is usually about $2-3. And you can find the tools and the gel dye at Michael’s. 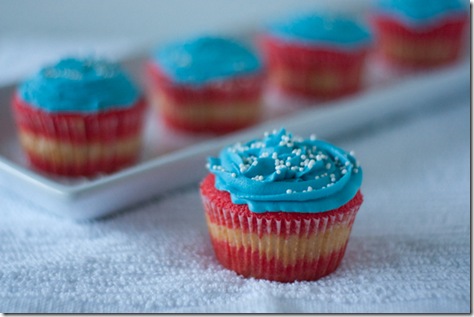 Anywho, the frosting style is totally up to you! 😉 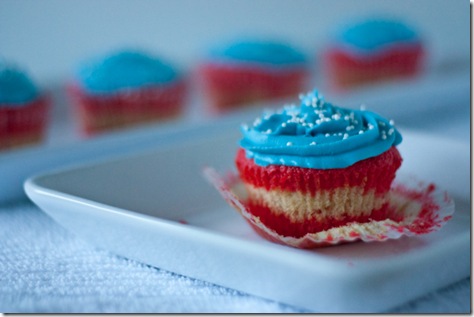 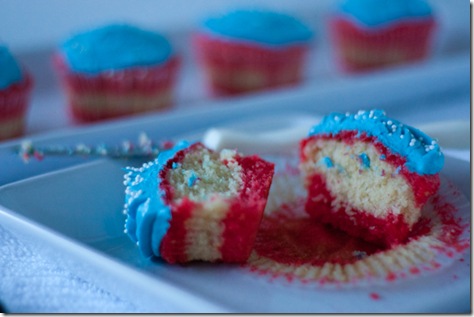 These Independence Day themed cupcakes are sure to brighten up your next patriotic picnic, cook-out, or dinner party. They’re just as easy as baking regular cupcakes, but your guests will so impressed and never know your secret.
Be sure to check out the photos on this post for extra tips.

Are you celebrating the Fourth on Monday? What type of holiday eats are you more interested in: sweet or savory?