In this post, I’m sharing my Zumba Convention 2017 Day 3 experience via this and an embedded vlog. Included: Master class with Betsy Dopico, Tribute to the King and Queen of Pop (including George Michael this year!), my #2 Zumbawear haul, and photos and videos from the ZinCon 2017 Theme Party.

Want more ZinCon? Click here for all my ZinCon posts from the last seven years! 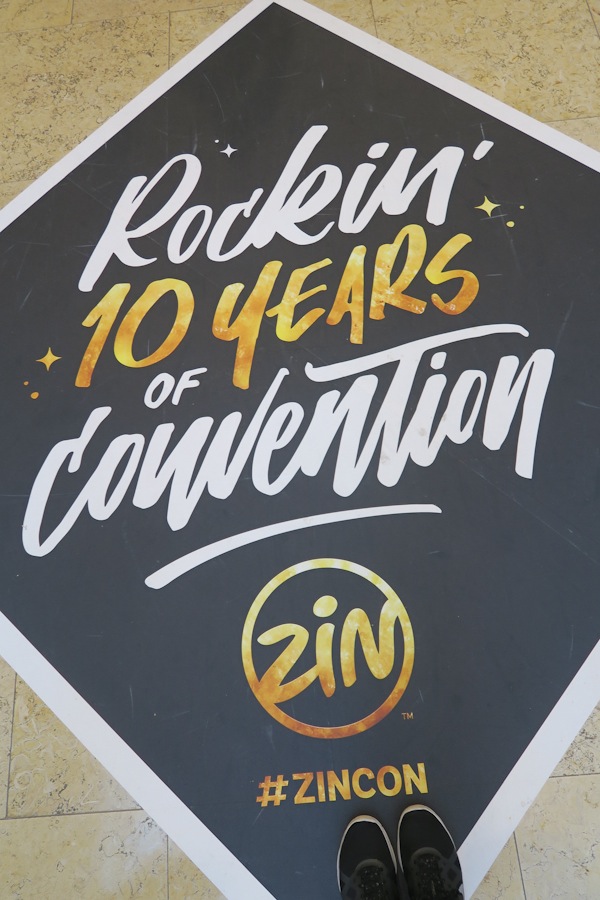 Can you believe this is the 10th Zumba Convention? This was lucky #7 for me!

Breakfast at the Hotel 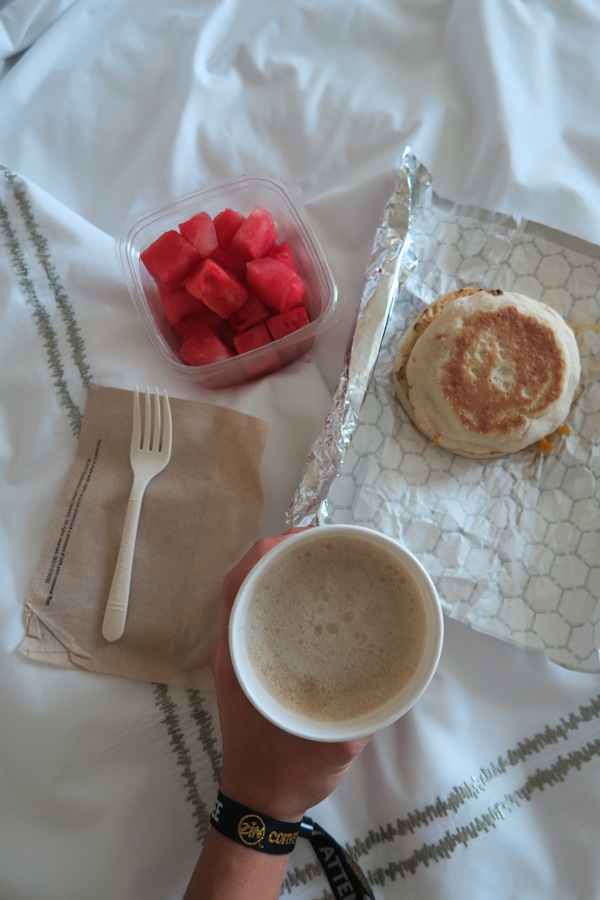 I got a repeat of the previous day – egg and cheese on an English muffin, grande soy latte, and this time – some fresh watermelon. 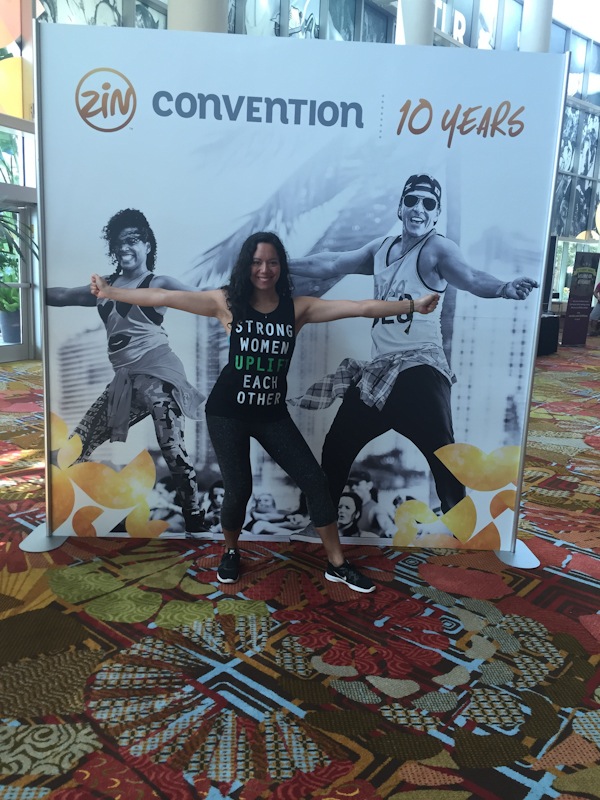 I brought a little NYC spirit with me by wearing this Strong Women Uplift Each Other tank by Uplift Studios.

Not sure why it’s taken me so long, but I finally got to do a session with Betsy Dopico. Wow she is so amazing and such a model instructor. I was surprised to see her teaching in a leg brace but was more so inspired by it. Besides being injured currently, I’ve taught injured many times before. It’s a real challenge, but she was definitely not letting it stop her. She was going as full out as she could, and I could barely tell the brace was even there. So much respect. Not to mention, it encouraged me to dance more myself (safely, of course!). 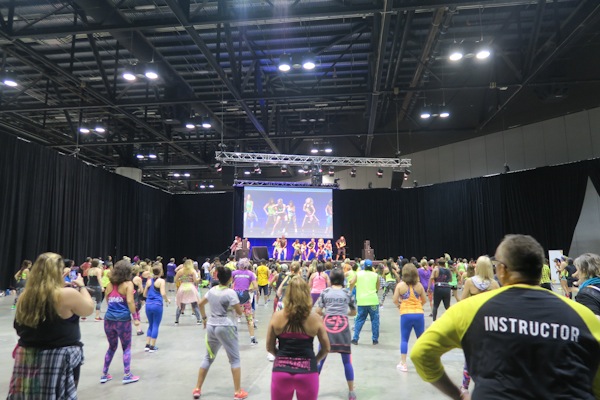 I loved the energy and enthusiasm she put into every move. You can tell she has a real love for what she does. The positive energy in the room was off the charts! 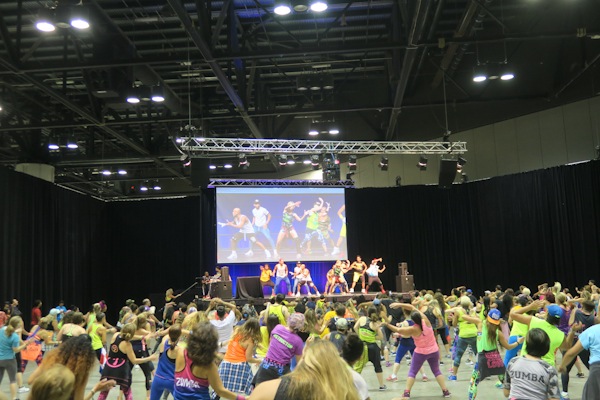 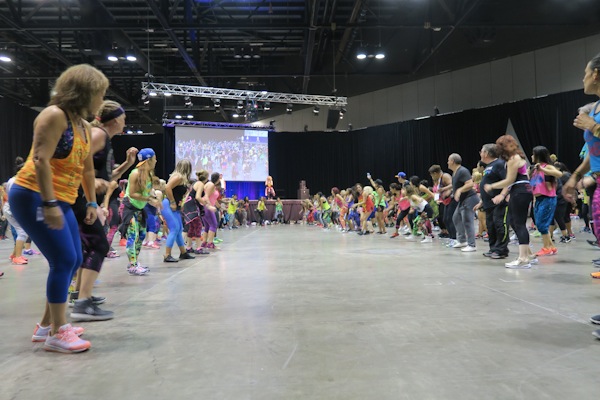 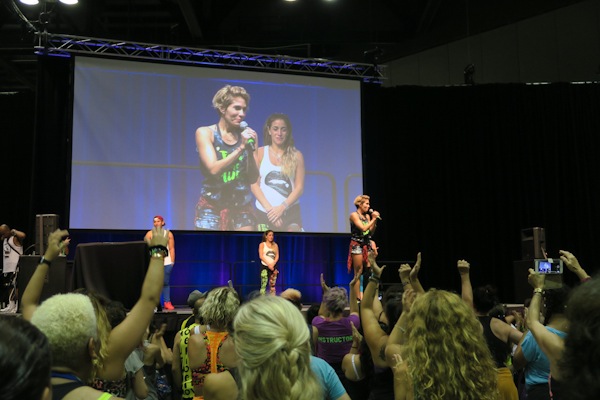 At the end, Betsy shared an inspirational message with us:

We have an important job in this universe. And it’s to bring happiness and good health to everybody.

Yes! Zumba is so much more than just a workout. Want to hear Betsy share this message? It’s in my vlog! I don’t share audio of presenters often, but this message is so important for Zumba instructors. It’s something I already believe but loved hearing from Betsy as a reminder if nothing else. And if you’re not a Zumba instructor yet, but you’re thinking about it, maybe it’s time to get on the path to becoming one? Is this the sign you’ve been looking for? 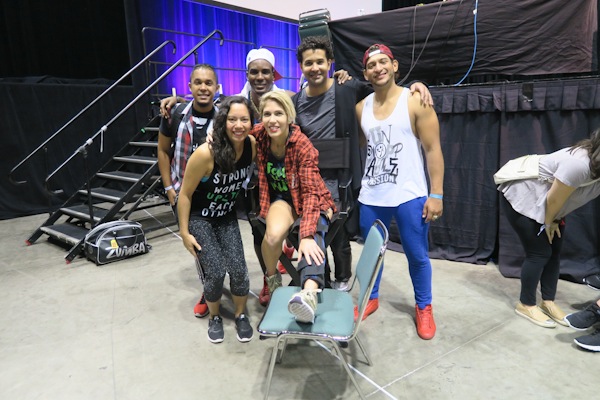 Thank you for the wonderful class, Betsy!

Customized Choreo: ZIN Volumes and You

My next session was something I hadn’t really done much at a ZinCon. Previously, I’ve avoided most choreo-related sessions because my dance fitness company was always putting out new choreo. So, I thought, oh I don’t need a choreo session, let me aim for the flavors. But, this was so much more than a choreo-learn session. In fact, it wasn’t about learning choreography. It was about customizing it. And I loved it!

While my dance fitness company had an extensive (roughly) 2-3 month training program, which included how to break down choreography, it was great to learn this from another perspective. Ana’s.

We started the session seated and introduced ourselves. After taking us through a super-fun master class, Ana discussed how to break choreography down, depending on the type of class you’re teaching. We broke into four groups (there were about 6-7 people in each group), and Ana assigned us different class types and asked us to customize one of the newer ZIN songs, Lo Que Tienes Tú by Max Pizzolante, for our group.

Our group tailored the choreo to a group where we showed progression of moves, starting basic and moving to more advanced. After working for about 10-12 minutes, we verbally shared how we’d customize our choreo, group by group. Then one representative from each group led the rest of the class with those customizations. Katie from England volunteered as our group’s representative and absolutely rocked it out! Woop!

Even though I’ve had a lot of training on breaking songs down, I really enjoyed learning new tips and hearing Ana’s feedback. And it was a good reminder of how important it is to customize your teaching and breakdowns for the type of class you’re teaching.

Every Zumba instructor would benefit from this session. 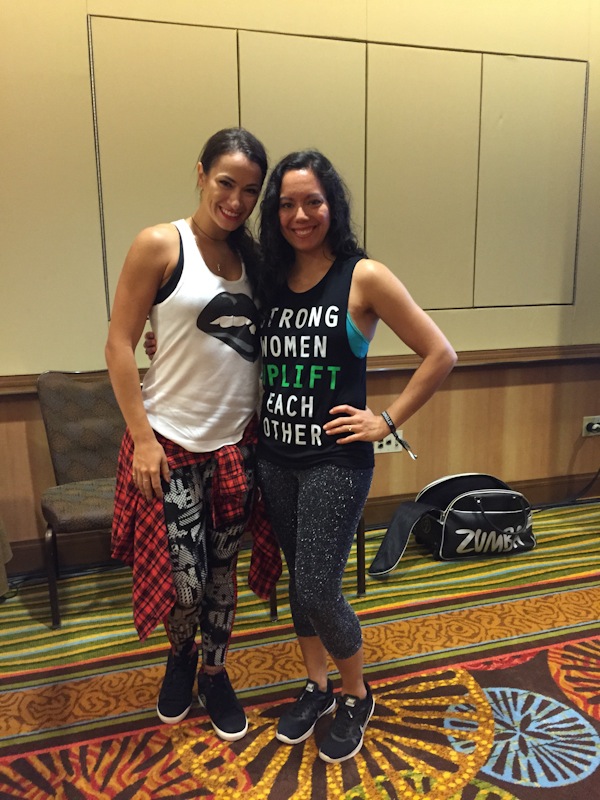 My favorite songs from Ana’s session were:

And we ended with a cool down to “Unstoppable” by Sia. Yes! 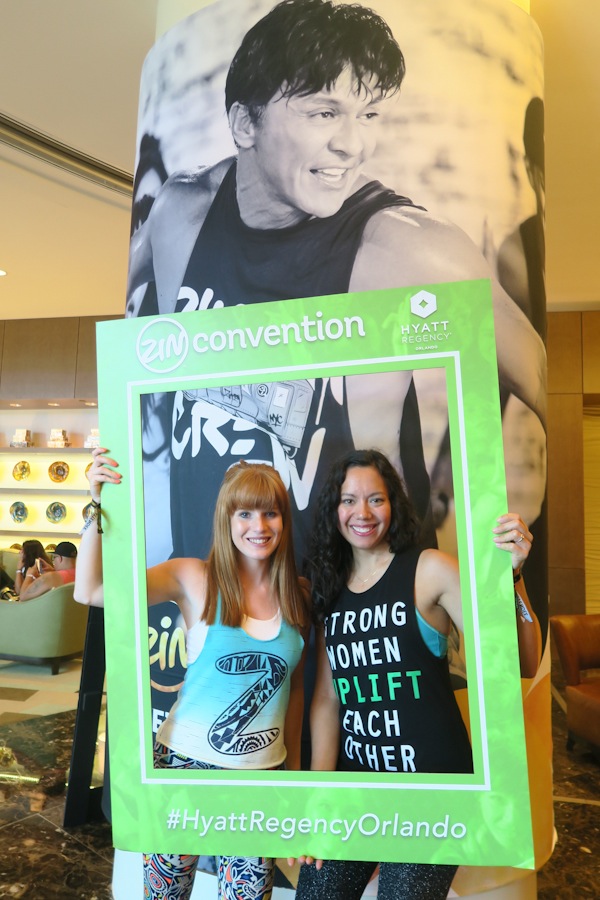 Since all of my sessions on Day 3 were at the Hyatt (almost a mile from the Hilton) and my breaks were on the shorter side, I decided to hang out at the Hyatt all day. This strategy worked out great, because I got to hang out with Katie from the previous session! She was so fun! 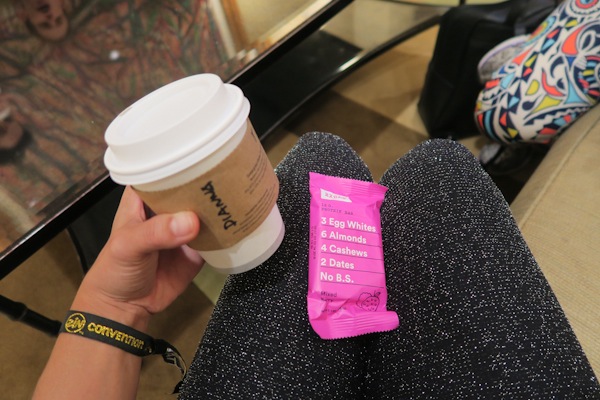 Since the breaks were so short, I fueled up with an RX Bar and a tall soy latte (there’s a Starbucks at the Hyatt).

Tribute to the Queen and King of Pop

I’ve talked extensively about my love of Steve’s Tribute to the Queen and King of Pop sessions, which I’ve attended in 2016, 2015 (Queen only), and 2014 (Queen and King, separately). I think I’ve attended all of them since he brought them to Zumba Convention. Or, this was at least my FIFTH time doing one of these.  This session is one of my all-time favorite ZinCon sessions. And I just love Steve’s instructor style. He’s so good at engaging the class. And I love his use of remixes of my favorite Michael and Madonna songs. And this year, he included George Michael! I even love his spinning moves, which I also like to do occasionally when I’m teaching.

I did have one fun spin moment in the session myself where we were doing “Wanna Be Startin’ Somethin'”. This is a song I’ve taught many times (with adapted choreo), so I was familiar with the song sections. There was a point that I knew would be great for an impromptu spin, so when the moment came I went for it. I did the kind where you jump your feet out and then back in but crossed and then spin around 360. It was a special moment for me because I’ve barely danced since February because of my injury. It was great to enjoy the moment and be playful. It made me feel more like myself in a way..if that makes sense. 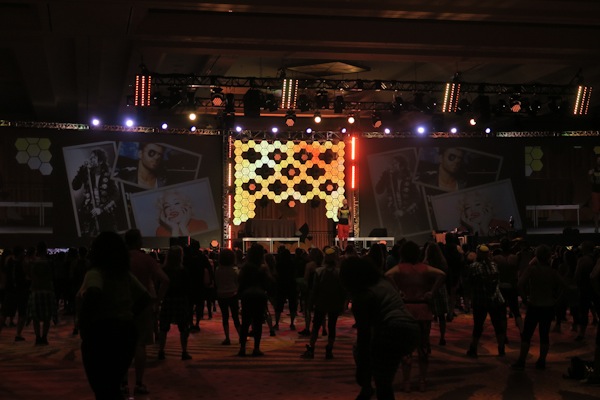 My favorite songs were: 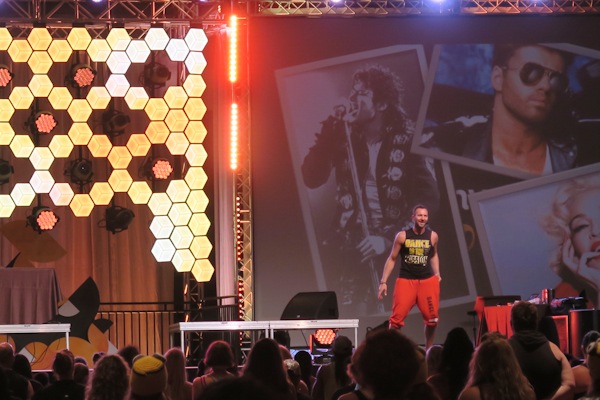 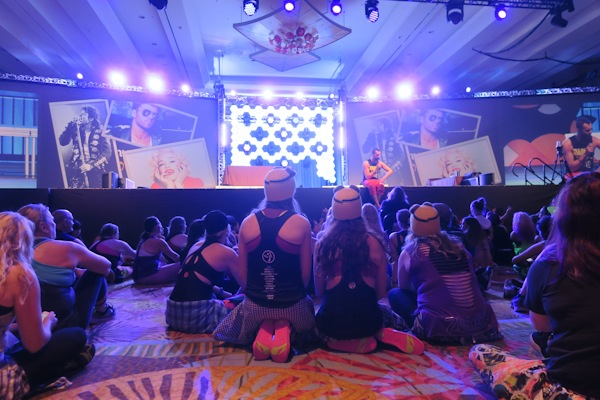 At the end of the session, Steve did a mini Be the Inspiration session (which I did back in 2012) where he talked about how important it is to maintain positive thoughts during class, expect the best of people, and continue to spread positivity because you never know when you’ll be the sliding door to change someone’s life.

That 2012 session gave me some of my most valuable ZinCon take-aways ever, and I’ve missed that he doesn’t still do that session. So I was thrilled to get him cover similar content to that session at the end of this one. So lucky!

As he was talking, I was reminded even more about how much I love teaching. I can’t wait till I’m healed up and can start teaching again! I left the session feeling super inspired! 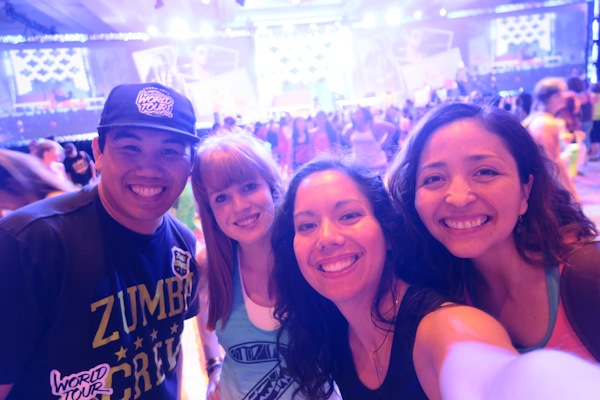 Hi to new dance friends Michael and Katie! And I got to do this session with my roomie, Paola. Woop! 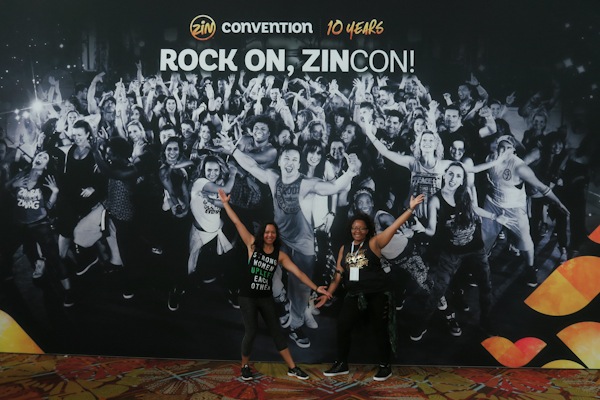 As I was leaving the Tribute to the King and Queen of Pop session, blog reader Brittney found me! I was so thankful she introduced herself. It’s always a treat to meet you guys in real life and such an honor to have each of you reading this blog. Since we were done with sessions, I got to spend some time chatting with Brittney, and that was so fun! We also took some photos and walked around for a bit.

Brittney is not only in my Day 3 vlog, but you may see her in some other Zumba-related videos in the future! *wink* 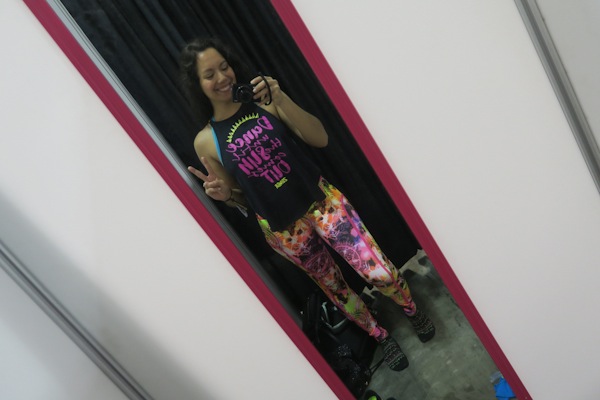 I’d been looking everywhere for this top, and I scored one someone must have returned.

The new clothes are available on Zumba.com, and I’m actually considering getting another tank in a different color (I’m thinking yellow). 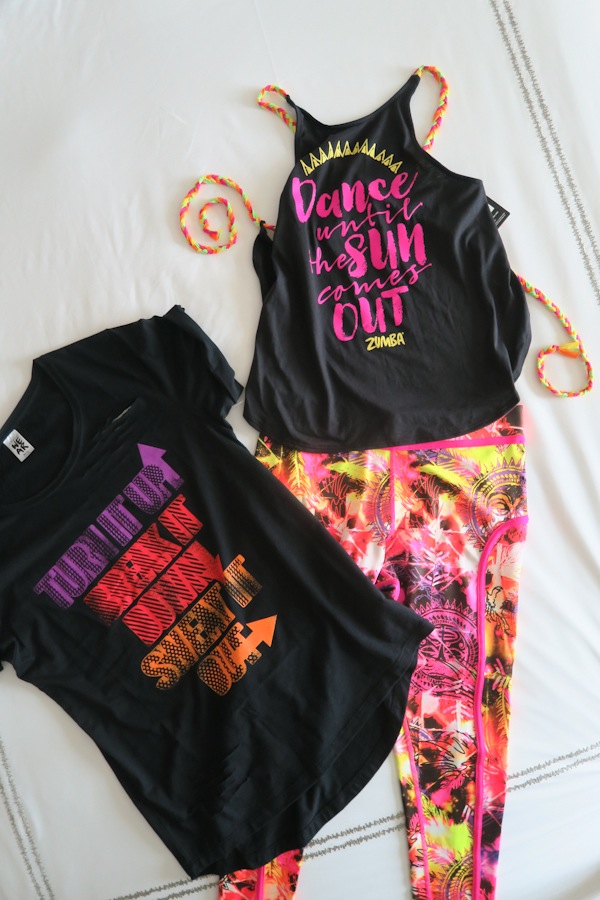 Here’s my second haul for ZinCon 2017: I got some of these crazy, “Rock Out Piped” leggings in Shocking Pink, a cute black t-shirt with some pre-done cuts and “Zumba” on the booty, and the “Dance Until the Sun Comes Out” tank with colorful straps that criss cross in the back. The back area is totally open FYI – I think you can see this (hopefully) in the video. It’s actually kind of hard to film your own back, but I tried to show what it looks likes.

After shopping, Paola and I refreshed in the hotel room and got ready for the theme party. We took a couple quick snaps while we were walking around. 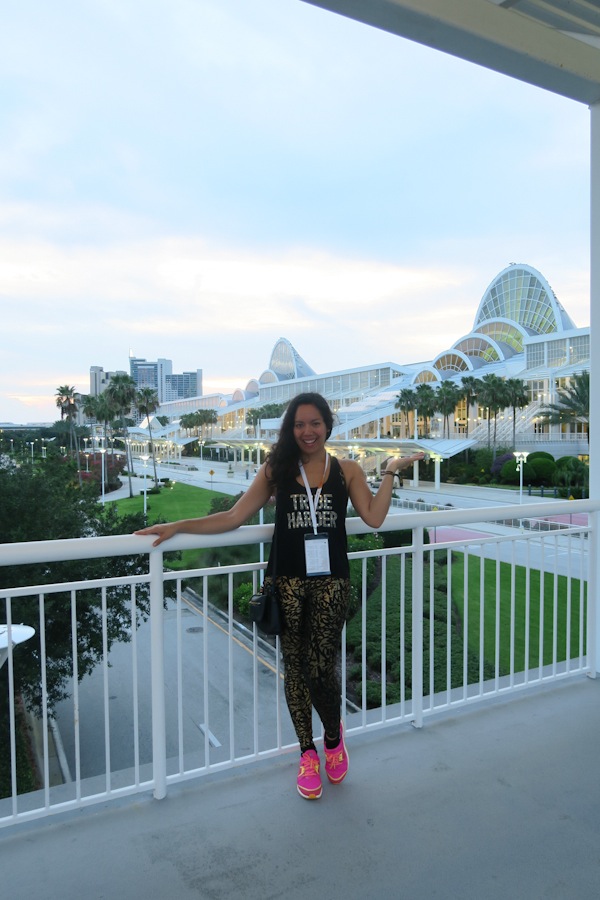 And then it was time for dinner. 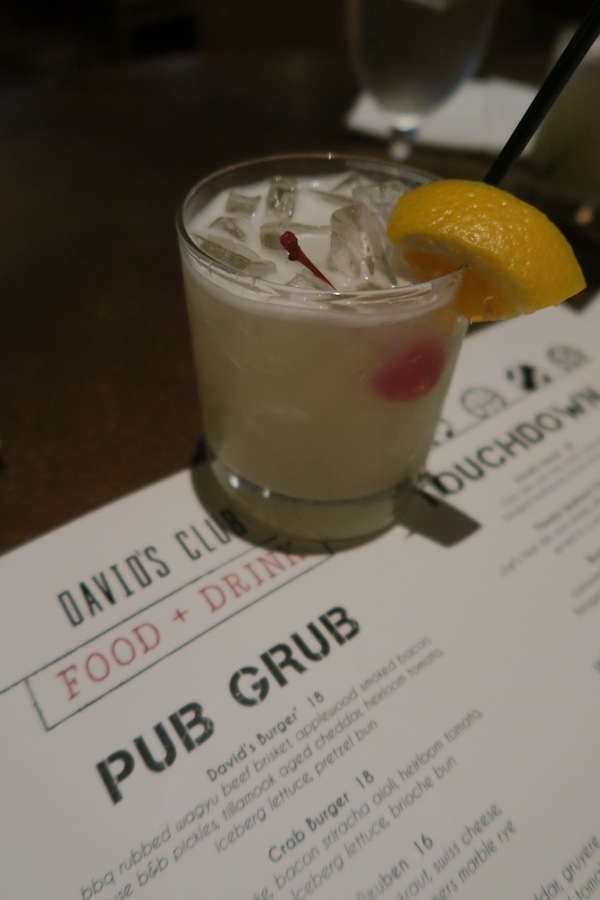 I fell in love with these Pina Margaritas (I think this is the right name). They were summery and refreshing. 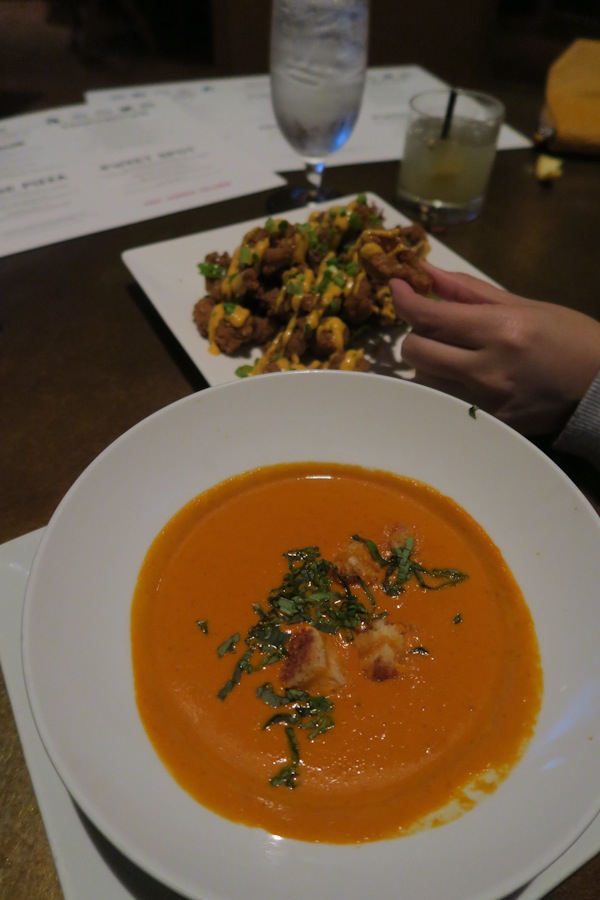 Paola and I planned to order a few different things, but some calamari and tomato soup turned out to be enough.

And can you guess what kind of calamari I like…and don’t like? It’s in the vlog, and it’s pretty random. But true.

As Day 3 was coming to a close, I was feeling pretty tired. I considered skipping out on the theme party, but I wanted to at least go and look at some of the costumes. I especially wanted to film a couple to share with you guys, and many of the attendees were happy to jump into the video. The costumes were amazing. I was so impressed! 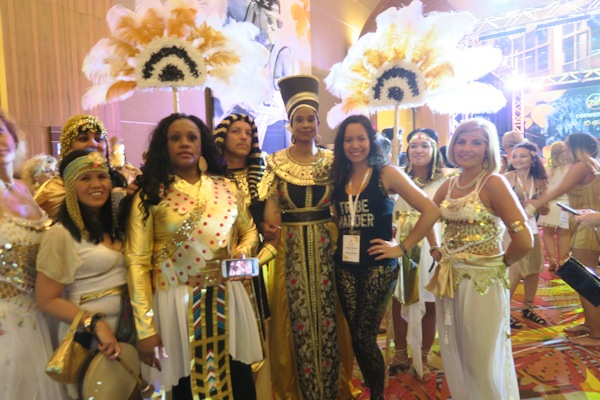 These guys came as a team, and they managed to re-create the costumes from Michael Jackson’s Remember the Time video. Wow! 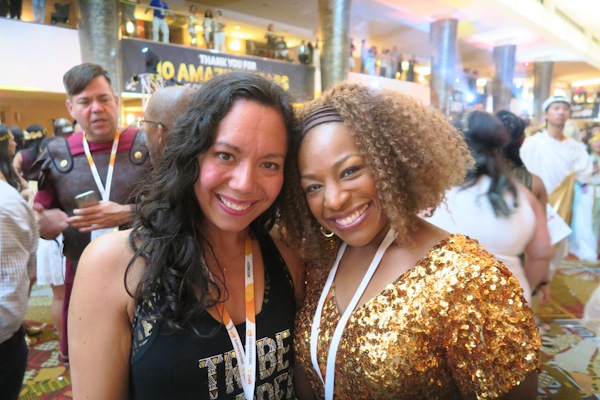 And I even ran into blog reader, Dee! It was so nice to catch up with her! 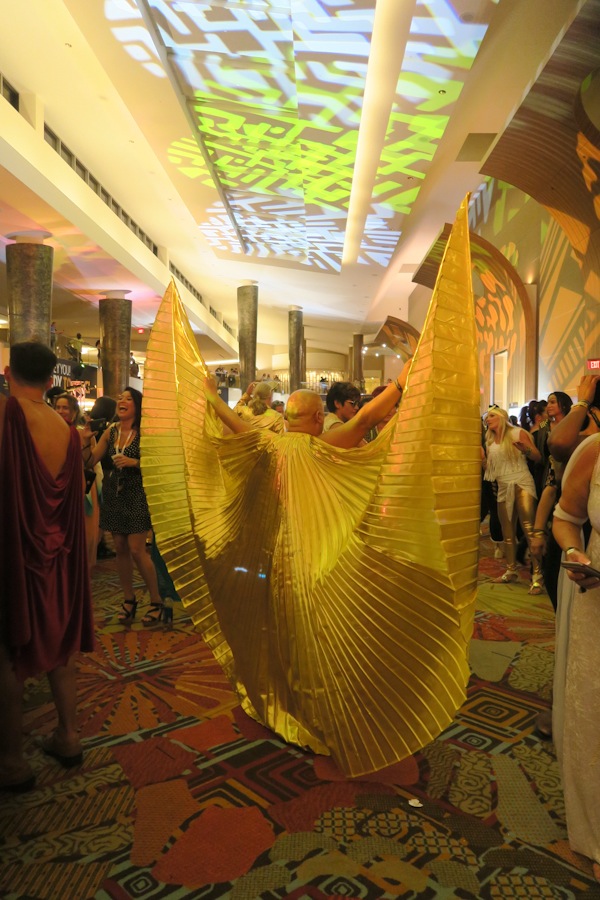 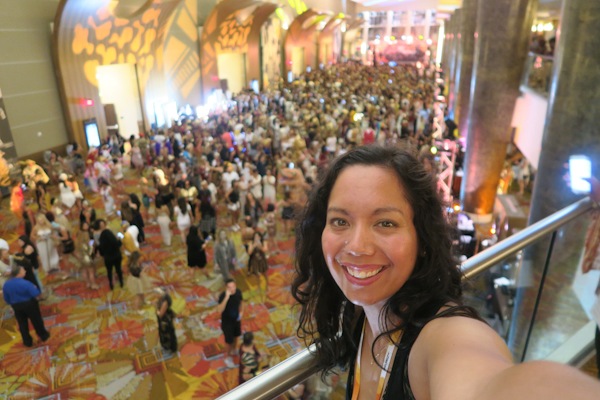 My stop at the Theme Party was short and sweet. I didn’t even make it into the big room! Lol.

Be sure to check out my video for more costume looks.

This was a fun one to shoot and edit. I was nervous about asking fellow ZIN if they wanted to be in the video, but I’m so glad I worked up the courage. I think sharing the cool hairstyles, costumes, and other moments really added to the video. Hope you like it!

If the video player above doesn’t work, click here to watch my ZinCon 2017 VLOG for my travels and Day 1.

Oh, and if you like the videos, please give them a thumbs up. It will really help me out a ton!