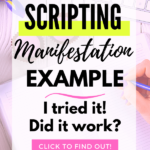 Want to know if the Law of Attraction method called “Scripting” works? In this blog post and video, I share a Scripting Manifestation Example and what went well and didn’t. This is a real life example of what I scripted for travel when I did a trip from San Francisco, CA to Orlando, FL and NYC in 2019. (This is a catch up post…clearly lol)

In case you’re not familiar with the term, “Scripting” is a manifestation technique where you write out something you want to have happen in the future as though it already happened. I don’t know why I wrote third person, though lol! Usually these days, I write my scripting more like a journal entry in the future. Anywho, through Law of Attraction, you’re aligning to the energy of already having the thing you desire, so this is a powerful manifestation method to attract your desire to your reality.

In this example, I had plans to travel from San Francisco, CA to Orlando, FL to attend Zumba Convention. Then I flew from ZinCon to NYC to attend an event with my business coach and also enjoy the city for a couple days.

Here’s what I wrote and how it actually played out in real life:

“Diana’s big July trip went off with a beautiful mix of ease and energy. Her trip to Florida on July 24th was easy and smooth. They even landed a little early.”

“The ZinCon team dinner was so fun. So many new friendships formed!”

“Diana’s ankle and foot felt great the whole trip. At Zumba Convention she danced freely and easily walked around NYC.”

“The trip to NYC was amazing. Diana loved being in first class where she belongs. The flight was smooth and Diana had plenty of time to have a relaxing dinner and get comfy at her AirBnb.”

“The Sunday event was a blast. Diana loved Erin and Sam, and she learned so much to set up her business for success, making key relationships and learning important strategies.”

“After a fun and enjoyable trip, she flew back to San Francisco in ease and peace, confident in herself, loving first class flying, and enjoying another safe and smooth trip to SF.”

Did my scripting manifestation example work? Yes, it did!

Almost everything I wrote happened just like I wrote it.

In some cases, I didn’t have the experience I’d expected, but that was mostly because I had one idea in my mind, but it wasn’t necessarily how I wrote out my scripting in my journal. Oopsie.

If you’re wanting to try scripting for yourself, definitely check out my notes above where I share some lessons learned. These are also in the video embedded and linked above.

Scripting is one of my favorite tools for manifestation since I’ve now had many Law of Attraction success stories using it!

How to Manifest ANYTHING in 3 Steps

More Manifestation Techniques and Methods for All Levels

Law of Attraction Tips for Beginners

Hope you enjoyed this post about Scripting Manifestation Example (What Went Well and Didn’t) | Florida/NYC Trip 2019.

Have you tried scripting? How was your experience? Did it work for you?

Questions or comments? I’d love to hear from you! Comment below!