Another year, another Zumba Convention. They always happen so fast! I started with good intentions to blog more real time during this year’s ZinCon. But, as with every year (I’ve been going since 2011!), things were just too busy! In the end, I couldn’t even keep up with my Instagram. I had one night where I thought I had a real chance at getting a post up. But, as seems to be the case when I have these rare pockets, I ran into technical difficulties. So, I’m going to pause my NYC posts anyways to bring you Zumba Convention Day 0 (Travel, Pool Day, and Dinner at David’s). 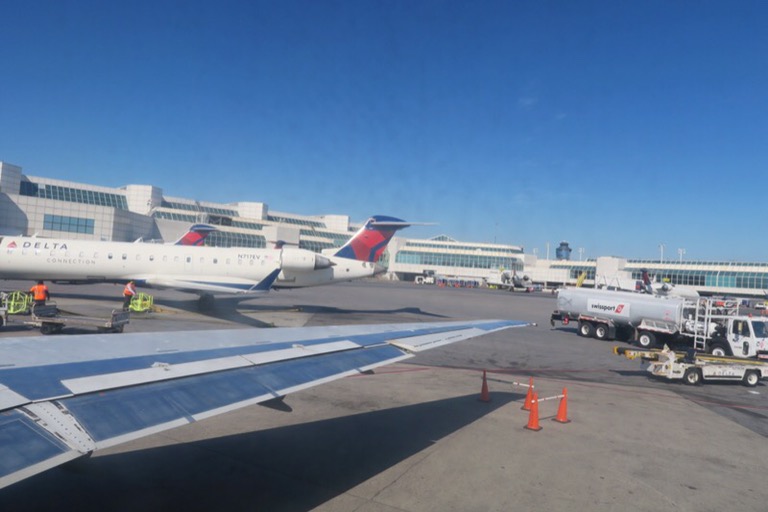 Zumba Convention 2016 started on a Thursday, and I debated whether I should take off the Wednesday before. On the one hand, I’m very careful about how I use my vacation days from work. Between all the family trips and holidays, I feel like I never quite have enough. On the other, it would be nice to have a relaxing day before the madness of convention really got going.

Since I was coming from NYC this year, there would be no Zumba road trip. No beach pit stop. No spa day. There was always the possibility of going to Orlando first, though. The thought of hoping for an Orlando pool day like I did in 2011 had me a little nervous. It ended up raining us out. But, I decided to go for it. If nothing else, it would be nice to start convention feeling refreshed, not stressed. Even if I just hid from any storms inside all day.

But, I didn’t want to leave too early. I booked a 10:30am flight, so I didn’t have to wake up super early. This gave me a reasonable wake up time of 7:00am. I had packed the night before, so I was pretty much ready to go.

There was a little traffic in the city, but I made it in good time to the airport. And I got really lucky with my flight. It was on time! Is it just me or is the norm these days that flights are delayed? 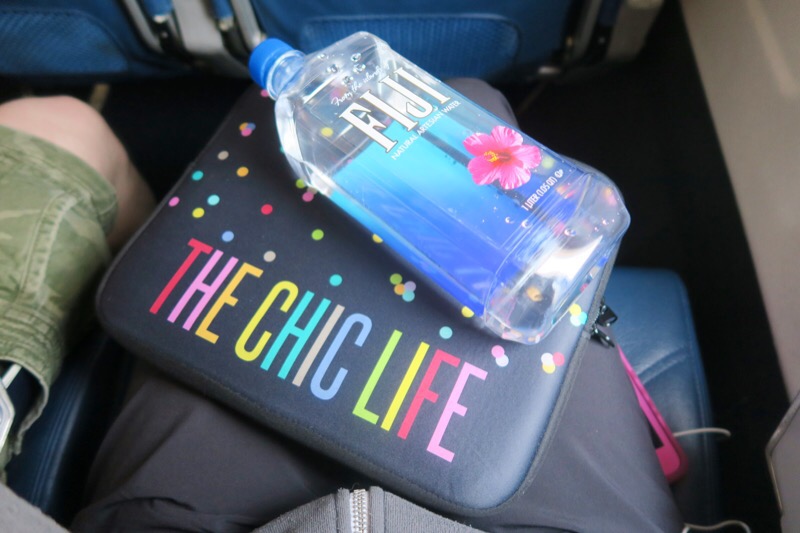 I tried something new this year for technology. I got an iPad! And I decided to bring the iPad instead of the laptop to save space and weight. I had debated whether I should get a smaller MacBook, but I’m testing out the iPad to see how it works as a blogging tool. I’ll be posting details on my  other blog. 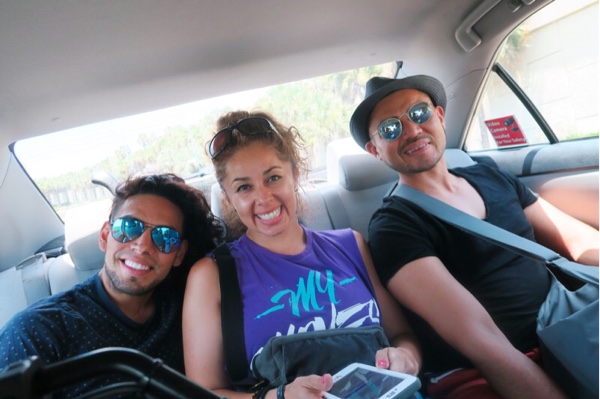 I noticed fellow Zumba-ers when I was waiting to board the plane in NYC. I wasn’t sure if I should approach them. Why would they want to talk to me? My inner high-school-introvert-self was scared. But, I thought…what’s the worst that could happen? There were two guys and one girl. I started talking to one of the guys first. “Going to Zumba Convention? Me too!” The girl came over next and when she heard I was going to Zumba Convention too, she gave me a big, warm hug and kiss on the cheek. And I thought, “this is what the Zumba family is about.” If I didn’t already know it, I was reminded of why I like going to ZinCon so much, year after year. Everyone is so friendly and happy. I was feeling the Zumba love already.

We ended up splitting a cab to the Hyatt since they were all staying there. Now that I’ve been walking about NYC so much, the White Mile no longer scared me. I figured it would be worth getting to talk to some new friends for a bit longer. And it was! I learned Will, Alexandra, and Wilber own a studio together in NYC called 7 Studio, in addition to teaching classes at Crunch and Equinox.

Definitely go visit them if you’re ever in the NYC area! 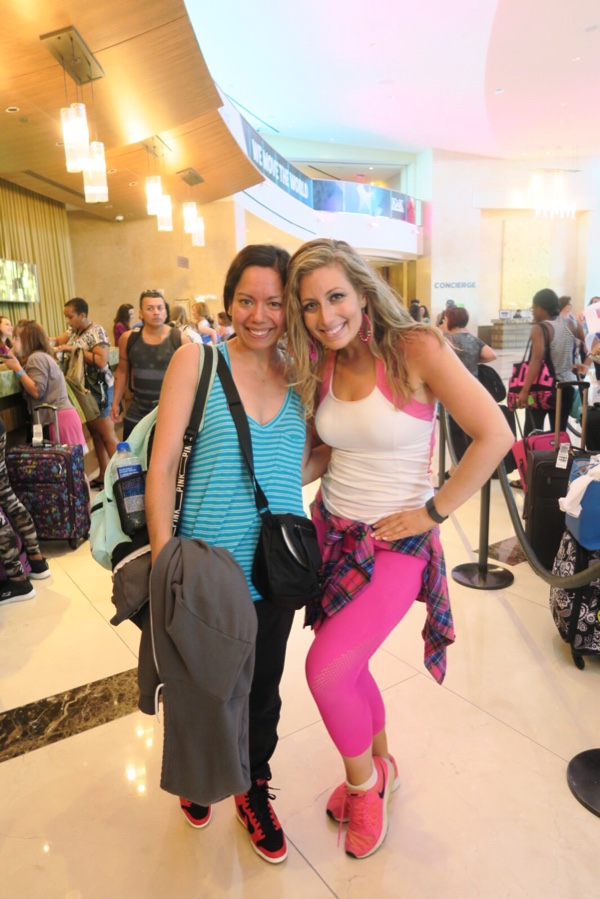 While I was saying bye to my new friends, someone approached me saying they’d seen my vlogs from last year. That they’d helped even one person made me feel successful in putting them together for the 2015 Zumba Convention. That’s the whole reason I made them! Rose Beth, who is from Venezuela, is also planning to make some vlogs from this year’s convention. I’ll link up her channel when I find it.

The Calm Before the Storm 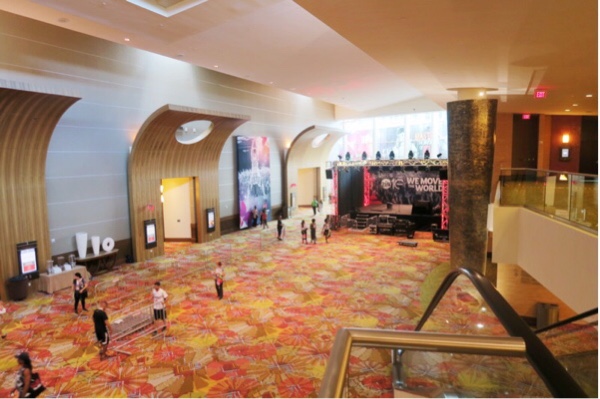 I figured it would be pretty slow around the convention venues, but it was surprisingly empty. This was definitely the calm before the storm. 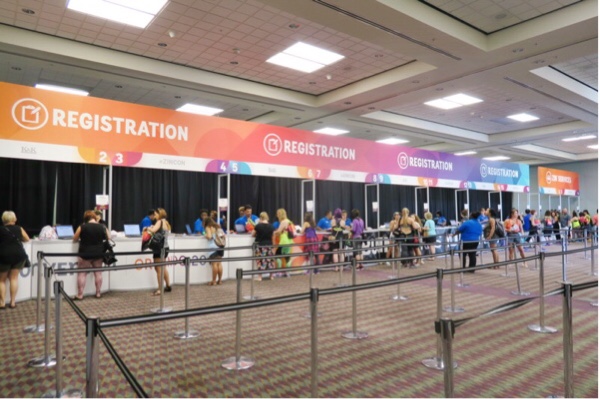 An added bonus of walking from the Hyatt to the Hilton was that I passed right by the Registration. So I took care of that while I was in the area. 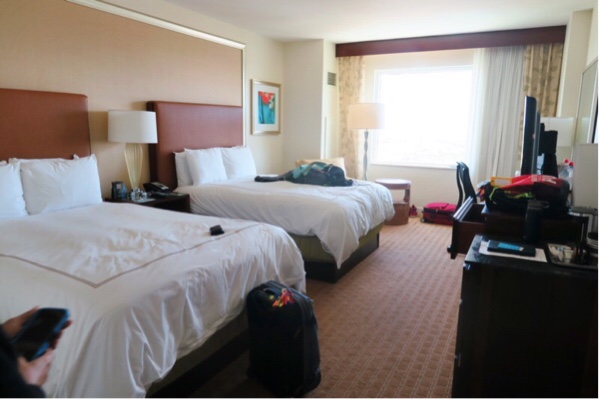 Then, I met up with my roomie, Annette, and we headed to our home away from home for the extended weekend.

I first met Annette by taking her Britney Spears dance classes on ClassPass. Her company, Mitchell Wayne Productions, offers more than just Britney classes, but those are my fave. 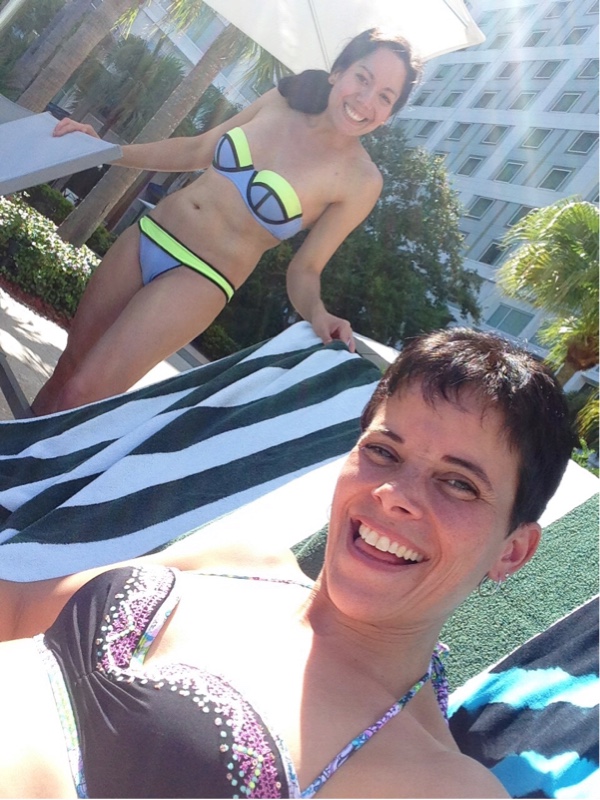 {Above picture by Annette}

As for that pool day, we lucked out! The weather was gorgeous. 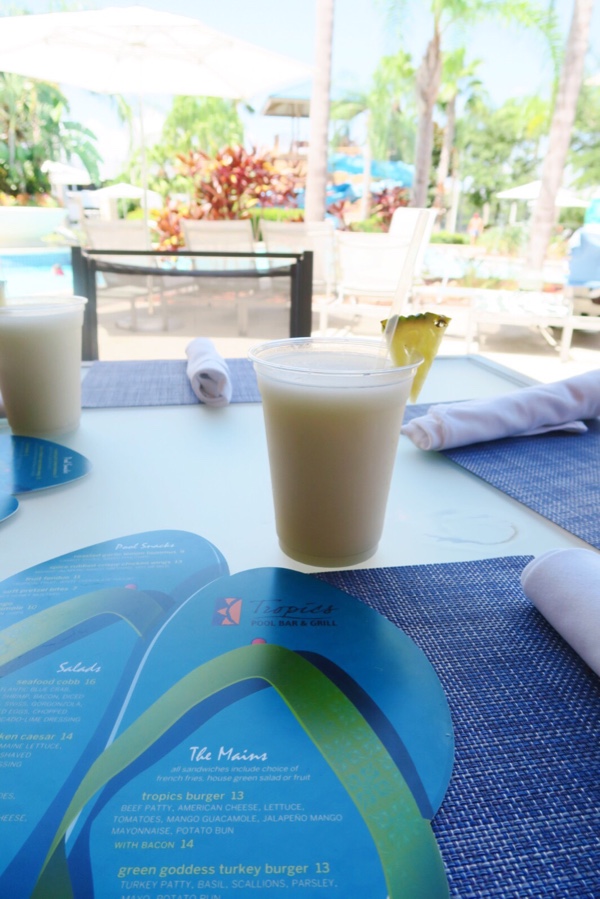 We stated with piña coladas. We later learned they were made from a mix, which is nowhere close to as good as from-scratch. But, I was in vacation mode, so it worked for me. Sharing that since a lot of you are clean eaters. 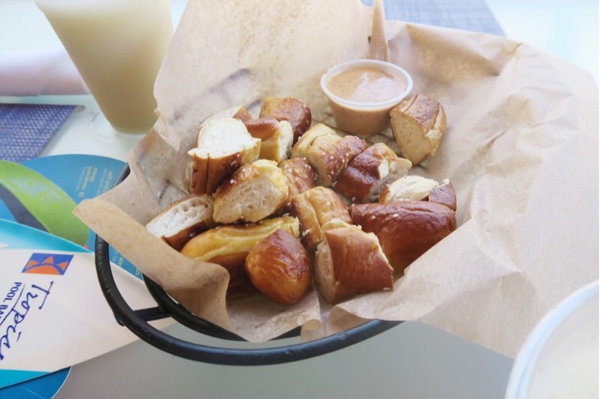 The pretzel bites were a little disappointing. They were basically made up of (at least) one large pretzel that had been cut into smaller pieces. And the sauce was something like thousand island or something. I’m so used to mustard with pretzels. Or beer cheese dip. Ooh… 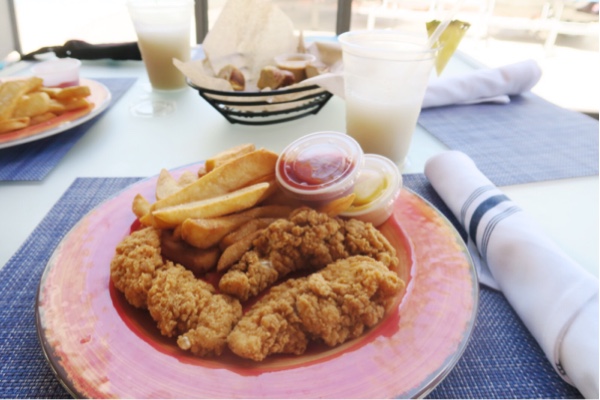 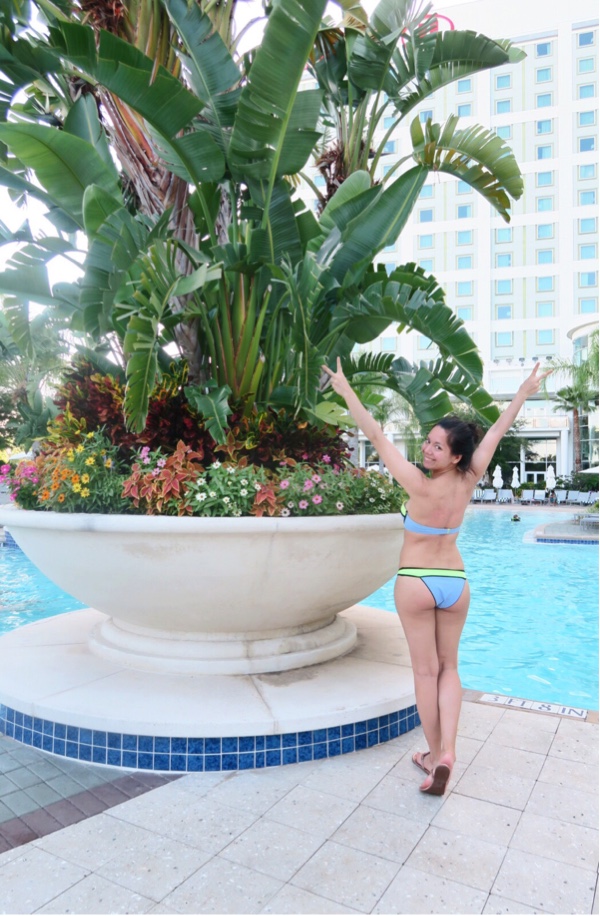 I was definitely glad to have the chill day to hang with Annette and generally de-compress.

Grocery Stock Up at Publix Orlando 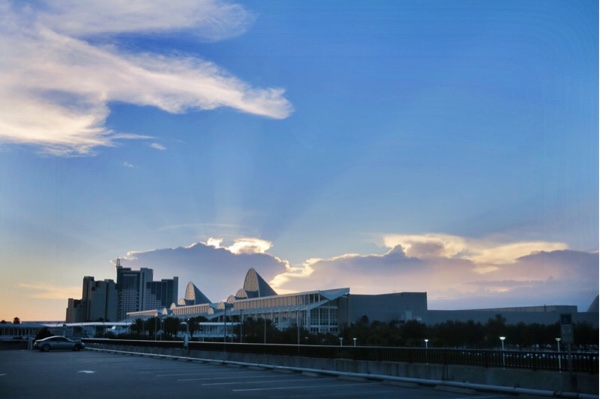 As the sun set behind the convention center, we walked just over a mile to a nearby Publix. This is where I like to stock up on groceries for the trip. We took an Uber back, and it was about $5. Not bad if you’re sharing with someone, especially. 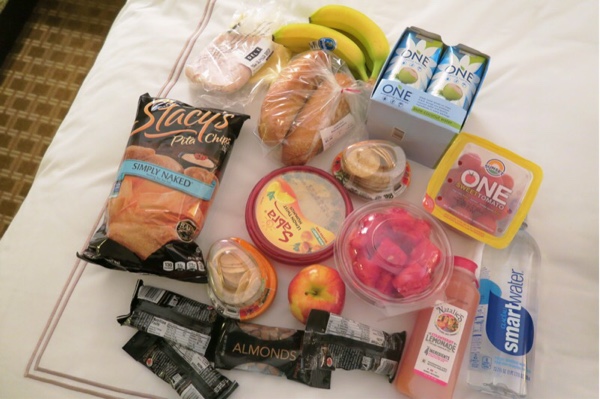 I had enough to make two lunches and enjoy many snacks. Since we’re usually dancing anywhere from 4-6 hours (or even more!), I usually get pretty ravenous. By Day 3, I’m like…eat all the things! 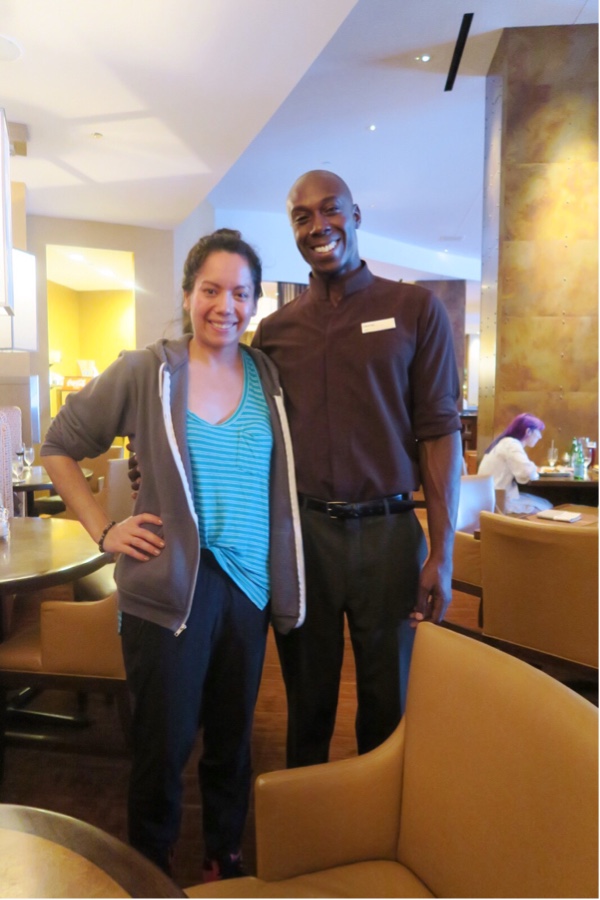 And I got to see Dwayne from David’s (Hilton Orlando). Angie and I met him at last year’s convention and were blown away by his excellence in customer service. He’s a remarkable team member, and I hope David’s appreciates him as much as his customers do! 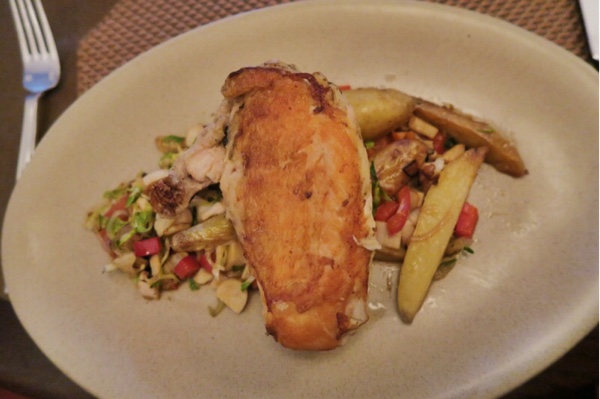 I was hoping to see that delicious quinoa-crusted tofu that I fell in love with the previous year, but they had a whole new menu. I decided to try the chicken, and it was wonderful. It was served on top of a bed of heart of palm with bell pepper, shredded Brussels sprouts, and potatoes, if memory serves me correctly. It was so good, I got the same thing the next day!

The 2017 Zumba Convention dates have been announced!

Click here for links to view photos from Zumba Conventions since 2011!