I don’t know about you, but Bailey is really loving his new Christmas goodies. 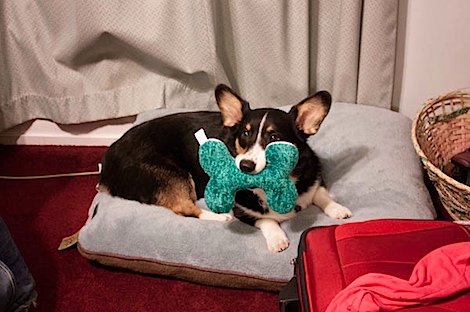 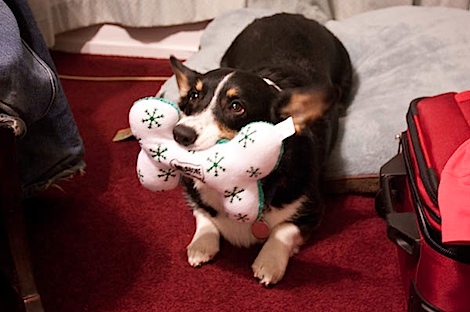 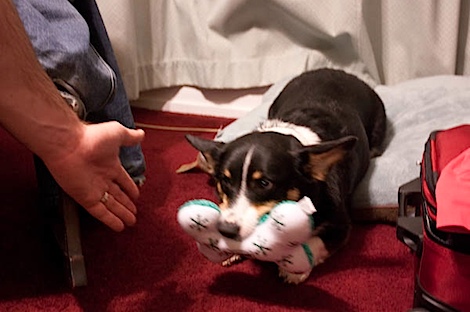 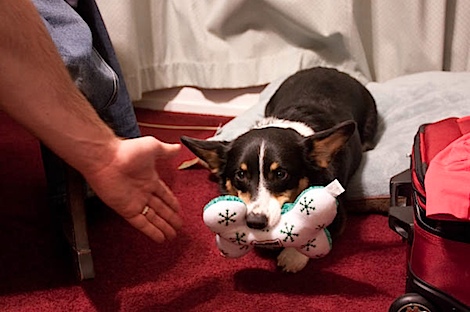 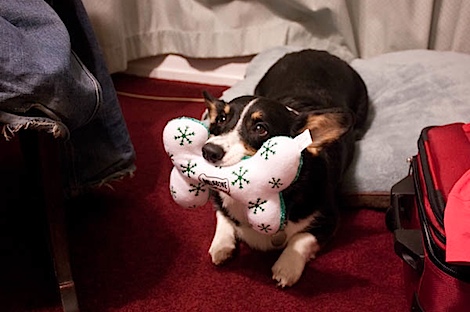 In fact, he doesn’t want to let his go! 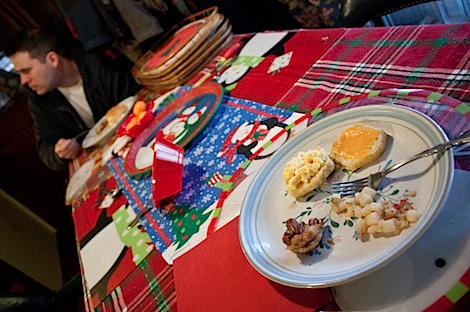 After a late breakfast at my MIL’s house, we were off and headed back home. 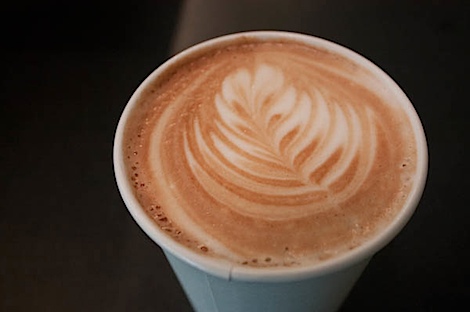 But not before picking up a latte from Copa Vida Coffee because I adore their lattes – especially how they’re made with local milk. This is a hazelnut latte with full on whole milk, baby! De-lish! 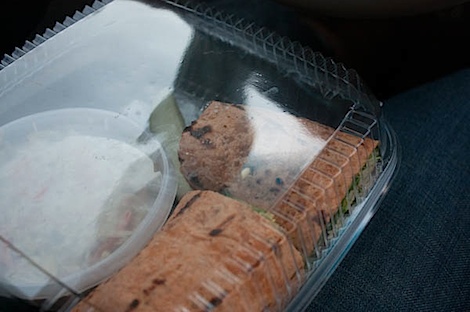 I also had a chicken salad wrap on the road. 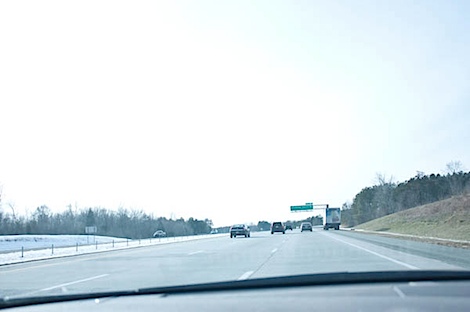 It was too short a trip to my MIL’s house, but hopefully we’ll be able to stay longer. 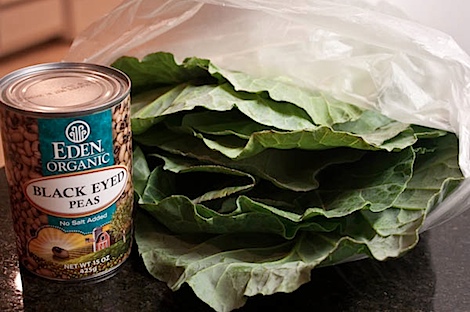 Once home, I made a pit stop at the mall to exchange a dress hubby got me for Christmas. It was beautiful, but the wrong size. 🙁 I also hit up the grocery store for eats, staples, and collard greens and black eyed peas. I’ve made the mistake of waiting till New Year’s Eve to buy these new year eats and they’ve been sold out! 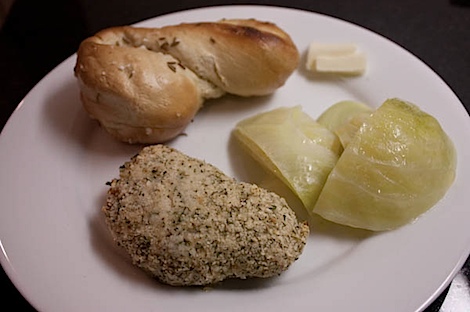 I did a simple dinner of a pre-prepared spinach feta chicken roll-up from Earthfare, another rye bagel (they’re simple irresistible I tell you), and steamed cabbage. 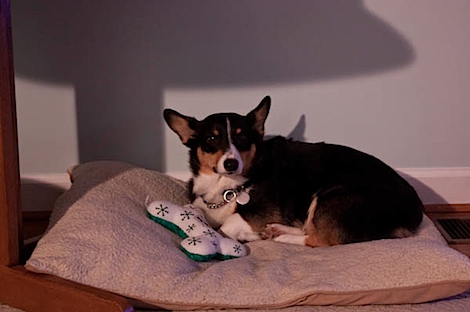 and look…Bailey even has his toy still! Wonder if I can wrestle it from him later? hehe

So what’s the deal with collard greens and black eyed peas? It’s tradition to eat them on New Year’s Day for good luck and prosperity for the upcoming year. I believe this tradition is mainly followed in the South, but for sure my family has always done it, so it’s tradition. 🙂 I love a good tradition.

Here were my New Year’s Resolutions for 2010 (and how I did in italics):

have date night once a month – I think we say this one every year. I’d like to do better this time. – didn’t do so hot on this. Hubby and I spent plenty of QT together, but I’d like to set up a special, reserved day.

get organized – enter important dates into iPhone calendar, find a place for everything in the house, etc. – I actually did start using my Mac calendar for dates, and it did help. I need to get some more organization systems going on in my house…just need to buy some more furniture to do it! 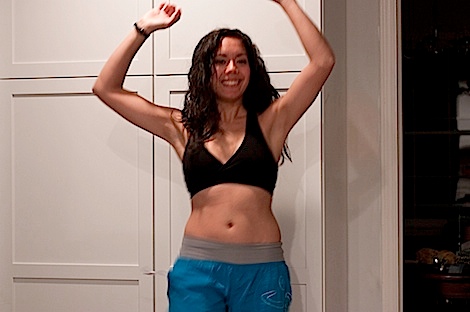 start teaching zumba once a week – which reminds me…I need to get business cards made!! – Check! Yay! 🙂 I was teaching twice a week when I had a private class, but I’m still teaching once a week, and hoping to get another class soon! Check out my Zumba page to read about my journey to becoming an instructor. 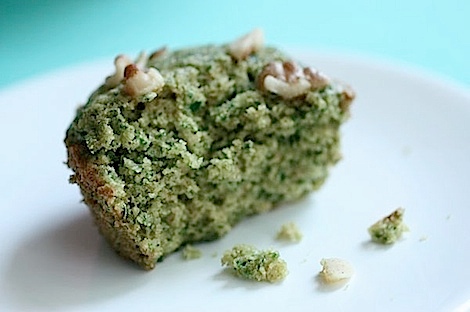 cook a new recipe once a week – this may be harder than I think. I hope it isn’t. – I’m not sure if I’ve tried exactly one new recipe a week, but I’m very happy with the variety of recipes I’ve tried out and developed in 2010. Some of my favorites are my Green Monster Muffins, Breakfast Cups, Veggie Quinoa Burgers, Green Tea Soup, and of course, Chocolate Chip Dough Balls.

eat out no more than twice a week – starting with the Eat in Month Challenge!! – Eat in Month was so successful that I’m going to be doing it again for 2011! Stay tuned for details. As for eating out no more than twice a week over the course of the year. I started out great, but towards the end, we got back to our old habits. Good thing I’m doing another challenge to get myself straight! 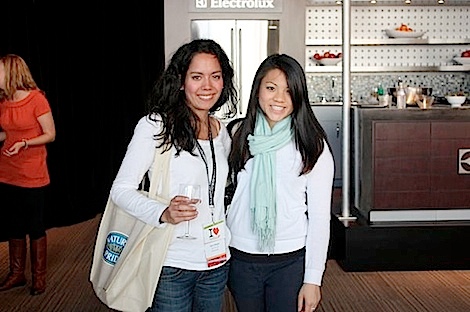 go to a blog convention – I wanted to go last year but the house kept me away. No excuses this year! – Check! I went to TWO! I went to the Healthy Living Summit and Foodbuzz!

finish kitchen renovation – sooner than later I hope! – Fail. I don’t think we’ve accomplished anything with this in the last year. I’m hoping to get hardware for the cabinets and a backsplash asap.

get house set up (hang curtains, hang pictures/art, set up rooms) – again, sooner than later I hope! – Fail again. I’m so bad at house stuff. I blame our lack of disposable income. lol. We do have more furniture than we did this time last year, but we still have a long way to go.

have friends over at least once a month – I heart dinner parties – Hmm…not sure if we did this once a month exactly, but we did have people over fairly often – once we got the house warming out of the way, of course. I think we did pretty well.

volunteer at least once a month – Maybe more? – Fail. I’d like to prioritize this in 2011.

go to church at least once a month – Maybe more? – Fail. Ditto.

Read at least one chapter from Don’t Sweat the Small Stuff per week – I’d like to learn how to be more relaxed, overall. – I read a few chapters, but not the whole book. I’ve been reading some of the chapters again this month. I may be able to finish the book by 2011? 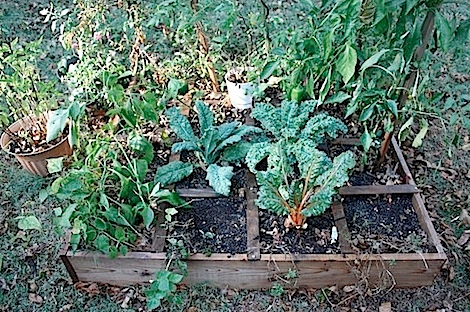 start a vegetable and herb garden – been wanting this for years…finally have the house and yard to do it! – Check! The garden didn’t yield as many veggies as I expected, but lesson learned for next year. I have better ideas for what to plan in 2011.

take photography lessons – plans for this one have been nearly thwarted thanks to my camera breaking down and being in the shop…grr – Check! I took an 8-week intro to DSLR course in town. I learned sooo much!

Eat at least 1 veggie/vegan meal a week – veggie/vegan meals are fun, nourishing, and something I’d like to eat more often. – Check! I actually eat quite a few vegetarian meals every week now. I’ve been a little surprised at how much I enjoy them and how little I miss the meat. I still like meat in my meals (as does hubby), but I’ve learned how tasty and enjoyable vegetarian and even vegan food can be.

Add strength training to workout – this will help my fitness overall and prevent injuries. – Not so much. I really should do this though.

join a gym – gotta have somewhere to do the strength training! Maybe I will join the gym where I’m a zumba instructor?

– Fail – with all the teaching I’ve been doing, I’ve been a little too busy for a gym. Not to mention they are generally expensive! I wonder if free weights in my home would be more effective? 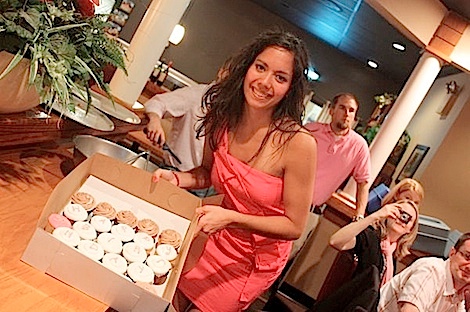 Do a vacation out of the country – we thought we’d go back to the Bahamas every year after our wedding…we haven’t been back since! Not to mention, I’d love to go back to France or visit Italy. The world is so big! – Yes! We went to the Bahamas! Click here to view the first post of the trip (and then use the links at the very bottom of the post, after comments, to view the next post to see the rest)

Overall, not too shabby! My goals were set pretty high and I think I did pretty well with them. I’ll be sharing my 2011 resolutions shortly. Stay tuned for details.

How did you do with your 2010 resolutions?