Hubby was not feeling well all day yesterday and wasn't keeping food down well (read: at all), so I decided to get some emergency get-well supplies from the grocery store on my way home from work.  I picked up a Vitamin Water (regular vitamins probably would have been better, but wouldn't be as easy to keep down), some saltines, a loaf of bread to make toast, chicken broth (to drink in case he needed liquid food), and two bone-in chicken breasts to make my Mom's Get Well soup.  My mom makes this amazing chicken and rice soup that always makes me feel better whenever I'm sick, so I got the recipe from her to make for hubby.  I like the soup so much, I planned on having it for dinner, myself.

Mom's Get Well Soup
Ingredients:
Directions: Heat oil in a large pot over medium to medium-high heat.  Salt & pepper chicken breasts and lay skin side down in the hot oil.  Brown on one side and then flip.  Brown other side.  Turn heat down and add onions & garlic.  Cook till onions are a bit translucent. 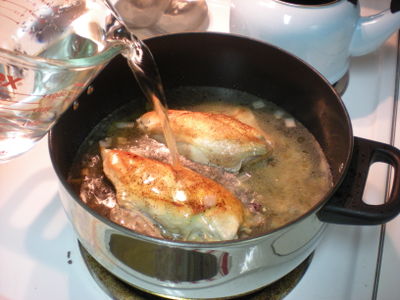 Pour enough water into the pot to cover the chicken breasts.  Bring to a boil, turn heat down to low to medium-low to simmer for approximately 1 hour. 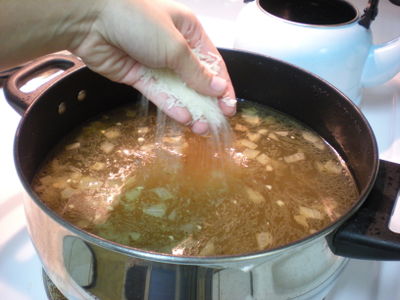 Next, remove chicken breasts to cool (just cool enough so you can remove the meat by hand) and stir in the white rice.  Re-cover and bring back to simmer.  Cook rice till soft (time will depend on the type of rice you use…mine took about 20-25 minutes).  Meanwhile, when the chicken is cool enough, remove meat. 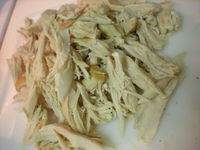 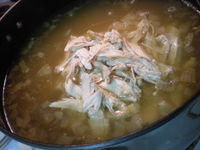 Add (boneless, skinless) meat back to pot (even if the rice isn't done). 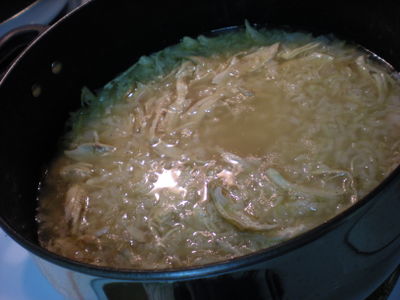 Stir soup together, let rice finish cooking, and voila!  You have soup!
Oh, but I should probably add here that around the time I had everything combined, but the rice wasn't quite done, I called my mom saying that the soup didn't taste quite right.  The soup actually tasted a little too "watery".  Mom suggested adding salt, and she was absolutely right!  So, if you try this and it tastes a little too bland or "watery", you should first try adding salt (I added roughly 2-3 Tbsp to mine total), but you can also add a can of chicken broth or a couple chicken bouillon cubes, if you prefer.  I would just do it till it tastes to your liking.  I'd give more accurate measurements, but things will depend on the size of the pot you use and the amount of water you put in it.  Just keep tasting the broth with a spoon until you like it. 🙂 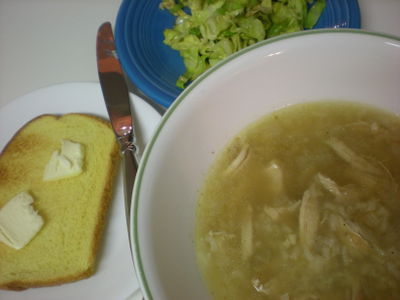 I served the soup with sauteed cabbage (based loosely on Barefoot Contessa's recipe), and a slice of potato-bread toast.  I originally planned to add the cabbage to the soup since it seemed like it would make it extra nutritious, while not disturbing the taste of the soup, but I just couldn't change up my mom's recipe.  I wanted it just like she would make it.
One added benefit of the soup, besides being nutritious (I think) and easy to eat for those with upset stomachs…oh, and tasty…is that the soup is relatively affordable.  We got a couple meals out of this soup, too.  We ate leftovers of the soup again for dinner tonight, and I froze two small containers for later.  Yum!

13 Comments on Mom’s Get Well Soup